Not long ago in Guangdong Province in southeastern China, botanists were working to save the last remnants of an obscure tree species, Euryodendron excelsum. Fewer than 200 hundred individuals in the species are known to survive, and they are scattered around the most densely populated corner of the most populous nation on Earth. Woodcutting and land clearing are constant threats.

Past studies had focused on the obvious biological and ecological aspects of these trees. But the species was still critically endangered. The new study, by researchers at Yunnan University, looked instead at a hidden world — the microbes living in and around the trees’ roots. 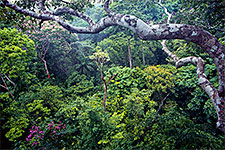 Researchers looked at the role microbes play in this tropical forest in Panama. MARCOS GUERRA, STRI

The basic conservation strategy was to grow seedlings in nurseries and transplant them out into new populations in protected areas — and the life-or-death factor turned out to be the mycorrhiza (literally “root fungi”) in the soil. Inoculating the seedlings with these fungi gave them an 80 percent survival rate, the study found. On their own, only 46 percent survived.

That result might not surprise most botanists, who have long recognized the critical role of microbes in mediating a plant’s uptake of nitrogen, phosphorous, water, and other essential nutrients. But until recently, this underground world was “a black box,” says ecologist Tom Horton of the State University of New York in Syracuse. The only way to study microbes was to grow them in culture or on seedlings. It took months, and it was sometimes hard to know what species you were looking at, much less how it functioned. The enormous diversity of microbes around a tree tended to get lumped into a few nebulous categories.

But that has changed dramatically over the past decade. Because of the increasing sophistication and affordability of genetic sequencing technology, researchers can now characterize the changing microbial community around a plant in precise detail in a matter of hours. As a result, the microbiome of trees is changing forest ecology much as the human microbiome now promises to transform the way we practice medicine.

Ecologists have come to recognize the vital importance of microbes to the survival of endangered species.

Ecologists have come to recognize the vital importance of microbes to the survival of endangered species from Palm Beach, Florida, to Rajasthan, India. They are now also beginning to sort out the role of microbes in tropical forest restoration projects, climate change planning, bioremediation of toxic waste sites, pest or disease control, and commercial forestry.

Some of this new work involves using microbes to manipulate narrow environments in ways that can seem weirdly precise and powerful. In one recent study in Italy, for instance, researchers at the University of Verona took a bacterial strain they had found in an oil refinery’s discharge drain. Because these bacteria seemed to have developed the power to transform a variety of hydrocarbon pollutants into less noxious forms, and because another strain in the same species had recently turned up living in the soil around hybrid poplars, the researchers set out to test the oil refinery strain in poplars. In bioremediation projects, these fast-growing trees often get planted at mines, abandoned factories, and other hazardous waste sites because they can efficiently pull contaminants out of the soil. Untreated poplars in the study removed between 82 and 87 percent of the hydrocarbon contaminants. But tweaking the process with the oil refinery bacteria boosted that to 99 percent abatement.

Other research on trees and their microbes seems to touch on the fate of the Earth itself. A study published this month in Nature, for instance, looked at forest regrowth on abandoned agricultural land in Panama. Just in the first 12 years of life, Princeton University researcher Sarah Batterman and her co-authors found, these young forests took up about 40 percent of the carbon they would ultimately store after 300 years. It worked out to 79 tons of carbon stored per acre, equivalent to the carbon emissions of an average American car driven 500,000 miles.

One study found young tropical forests took up 40 percent of the carbon they would ultimately store after 300 years.

How does reforestation work this magic? Tropical forests benefit from an early surge of tree and vine species that fix nitrogen from the atmosphere — a process that is utterly dependent on the nitrogen-fixing bacteria that colonize their roots. For conservationists attempting to restore tropical forests, the take-home from the study is that it can be critical to ensure the diversity of nitrogen-fixing plants (and microbes) in the early re-growth.

That kind of surge happened naturally at the research sites in Panama, says co-author Dylan Craven, who worked on the study as a doctoral candidate at the Yale School of Forestry & Environmental Studies. But in nutrient-poor or drought-prone areas, he suggests, conservationists might need to take a more active approach. “It’s not like there’s a manual for how to do this,” he says.

In some restoration projects, workers already collect tree seedlings from nearby forests and thus import the nitrogen-fixing microbes in the soil along with the seedlings. Elsewhere, the most efficient strategy might be to plant scattered patches of nitrogen-fixing seedlings on a site, to stimulate re-growth around them and eventually fill in the gaps.

Given that half of tropical forests are secondary growth on abandoned farmlands, these microbial strategies can be a factor in the debate about using reforestation to offset climate emissions. (They matter less in temperate forests, where nitrogen-fixing species are scarce.)

Microbes may determine whether tree species will be able to adapt to climate change.

Microbes may also determine whether different tree species will be able to adapt as the climate changes. At the University of British Columbia, forest ecologist Suzanne Simard looks at how Douglas firs will handle a projected shift in their range 500 kilometers north into the Yukon over the next 50 years. These trees depend on a community of about 2,000 species of fungi, as well as an unknown variety of bacteria, and together these microbes form a tightly connected network trading nutrients back and forth from one side of a forest stand to another.

“We really haven’t determined whether the mycorrhizal fungi will migrate along with their tree hosts,” says Simard. “And without an appropriate web of fungi to help the establishment of seedlings, forests may not migrate to new locations where climate becomes hospitable for them.” When commercial forestry companies first attempted to introduce Douglas fir trees to New Zealand in the mid-twentieth century, she notes, the trees sickened and died, until researchers figured out that they had to inoculate seedlings with the soil fungi from back home.

It’s possible that sort of strategy might also work in the Yukon. Moreover, inoculating seedlings with microbes has by now become standard practice for commercial forest companies, and they could perhaps make it happen. (Commercial nurseries often fumigate their seedlings to kill off fungal or bacterial pathogens. But fumigation also kills off the beneficial microbes, so a thriving business has grown up around reintroducing them to the soil.)

The new ability to identify microbes and understand their function has even raised the tantalizing possibility of treating forests with microbes to boost disease resistance or tolerance to unfamiliar climate conditions.

“Everybody is always looking for the silver bullet, some way to inoculate seedlings and improve growth,” says Simard. “But in my research, the introduced microbes get wiped out by the native fungi right away. You go back in ten years, and they’re not there. It would be nice to think that we can add something to the forest that would make trees magically grow. But all the evidence suggests that we can’t.”

What the new microbial research can do is at least shift forest managers and biologists away from thinking simply about trees as board feet, or diameter at breast height, or even as habitat for birds, insects, mammals, and other creatures. Instead, the microbial underworld of a tree is turning out to be as diverse and complex as the canopy overhead, and it is the world on which all those other worlds depend.