There is a water war going on in the Middle East this summer. Behind the headline stories of brutal slaughter as Sunni militants carve out a religious state covering Iraq and Syria, there lies a battle for the water supplies that sustain these desert nations.

Blood is being spilled to capture the giant dams that control the region’s two great rivers, the Tigris and Euphrates. These structures hold back vast volumes of water. With their engineers fleeing as the Islamic State (ISIS) advances, the danger is that the result could be catastrophe — either deliberate or accidental. 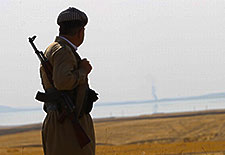 “Managing water works along the Tigris and Euphrates requires a highly specialized skill set, but there is no indication that the Islamic State possesses it,” says Russell Sticklor, a water researcher for the CGIAR, a global agricultural research partnership, who has followed events closely.

The stakes are especially high since the Islamic State’s capture earlier this month of the structurally unstable Mosul Dam on the Tigris, which Iraqi and Kurdish forces, supported by U.S. airstrikes, succeeded in retaking last week. Without constant repair work, say engineers, the Mosul Dam could collapse and send a wall of water downstream, killing tens of thousands of people.

Fights over water have pervaded the Middle East for a long time now. Water matters at least as much as land. It is at the heart of the siege of Gaza — the River Jordan is the big prize for Israel and the Palestinians. And over the years, water has brought Iraq, Syria and Turkey close to war over their shared rivers, the Euphrates and Tigris.

The Euphrates flows out of Turkey, and through Syria and into Iraq, before entering the Persian Gulf via the Mesopotamian marshes. The Tigris rises further east in Turkey and flows through territory currently controlled by the Kurdish army in Iraq. There, it follows a parallel path to the Euphrates before the two rivers mingle their waters in the southern marshes.

The Islamic State’s quest for hydrological control began in Syria, when it captured the Tabqa Dam in 2013.

The two rivers water a region long known as the “Fertile Crescent,” which sustained ancient Mesopotamian civilizations. They were the first rivers to be used for large-scale irrigation, beginning about 7500 years ago. The first water war was also recorded here, when the king of Umma cut the banks of irrigation canals alongside the Euphrates dug by his neighbor, the king of Girsu.

Not much has changed. The dependence persists, and so do the disputes. The main difference today is that the diversion dams are bigger, and supply hydroelectric power as well as water. And that is why in recent months, many of the key battles in Iraq’s civil war have been over large dams. 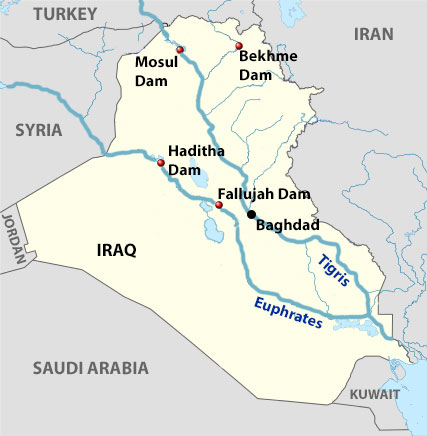 The Islamic State’s quest for hydrological control began in northern Syria, where in early 2013, it captured the old Russian-built Tabqa Dam, which barricades the Euphrates as it flows out of Turkey. The dam, which is the world’s largest earthen dam, is a major source of water and electricity for five million people, including Syria’s largest city Aleppo. It also irrigates a thousand square kilometers of farmland.

The Islamic State’s control of the Tabqa Dam has been haphazard, to say the least. In May, the reservoir behind it, Lake Assad, dramatically emptied. Many blamed Turkey for holding Euphrates water back behind its own dams upstream. But the Arab news service Al Jazeera quoted engineers at the dam as saying that their new masters had ordered them to maximize the supply of electricity. That required emptying the reservoir’s water through the dam’s hydroelectric turbines.

Since late May, the Islamic State has been trying to refill the reservoir by rationing electricity from the dam, with blackouts in Aleppo for 16 to 20 hours a day. Meanwhile, other fighting groups have shut down a water pumping station, cutting off clean water supplies for a million people in Aleppo. The UN’s under-secretary for humanitarian affairs, Valerie Amos, condemned this as a “flagrant violation of international law.”

From the Tabqa Dam, the Euphrates flows downstream through Iraq. Close to Baghdad, in the center of the country, it meets the Fallujah Dam, which diverts water for massive irrigation projects that produce the crops that feed the country. In early April, Islamic State forces captured the dam. Reports of what happened next are confused, but it appears that the troops immediately shut the dam and stopped flow downstream.

After Islamic State forces took the Fallujah Dam, vast areas of farmland and thousands of homes were flooded.

This left towns such as Karbala and Najaf, a Shiite holy city 160 kilometers away, without water. But it also caused the reservoir behind the dam to overflow east, flooding some 500 square kilometers of farmland and thousands of homes as far as Abu Ghraib, about 40 kilometers away on the outskirts of Baghdad. Later, the rebels reopened the dam, causing flooding downstream.

This mayhem may have been a simple failure by Islamic State fighters to understand the hydrology of the river and the consequences of how it operated the dam. It may initially have been an attempt to deprive Shiite communities downstream of water. But Ariel Ahram, a security analyst at Virginia Tech University, suggests the eastward flooding was a deliberate act to repel Iraqi government forces attempting to retake the dam.

The UN secretary-general’s special representative in Iraq, Nickolay Mladenov, called the flooding deliberate, and demanded the restoration of “legitimate” control of the river. The Iraqi government says it has since recaptured the Fallujah Dam. But the conflict in the area continues, and events remain very worrying for anyone downstream.

But the battle for the Fallujah Dam may be a sideshow compared to that for much bigger Haditha Dam, further upstream on the Euphrates. This is the first Iraqi structure on the river after it flows out of Syria. At eight kilometers across, it is Iraq’s second largest dam. It regulates the river for the whole of Iraq, providing the majority of water for irrigation, as well as generating a third of the country’s electricity. It keeps the lights on in Baghdad.

Islamic State fighters controls nearby towns, and in recent weeks have launched repeated offensives to capture the Haditha Dam, which the Iraqi government is equally determined to hold onto. “If the dam fell, then a large source of electricity for the capital could be shut down,” says Stickler.

The Mosul Dam, the largest in Iraq, is an engineering disaster waiting to happen.

If the Sunni rebels want to use water as a weapon of war against the Shiite south of the country, the Haditha Dam would be a potent weapon. “They could disrupt downstream flow, either by withholding water or releasing a wall of floodwater, as they did from Fallujah this spring,” says Sticklor. “It would have a potentially crippling effect on food production and economic activity in central and southern parts of the country.”

It could also be lethal. The water behind Haditha has long been recognized as a potential weapon of war. In late June, employees at the dam told the New York Times that Iraqi government generals were prepared to open the floodgates against Islamic State forces rather than giving up the dam.

A decade ago, invading U.S. troops made the Haditha Dam their first target, fearing that Saddam Hussein would release a catastrophic flood. (He had a history of making hydrological war. After the first Gulf War, he built huge earthworks to divert both the Tigris and Euphrates away from the Mesopotamian marshes, where rebellious Shiites were hiding.)

The Islamic State fighters have also at times gained control of the other great river, the Tigris. Early on in their offensive, they grabbed the Samarra Barrage, just upstream of Baghdad, which diverts water to fields for irrigation. Messing that up could cripple the country’s breadbasket.

Much worse could happen at the Mosul Dam, which Iraqi and Kurdish forces recaptured from the rebels last week. That dam is the largest in Iraq. It barricades the Tigris about 40 kilometers upstream of Mosul, Iraq’s second largest city. Living downstream of the Mosul Dam on the River Tigris looks particularly risky right now.

The Mosul Dam is an engineering disaster waiting to happen. Back in 2007, the U.S. Army Corps of Engineers called it “the most dangerous dam in the world.” Its foundations are built on porous gypsum that is constantly being dissolved by water in the reservoir, creating sinkholes that threaten the structural integrity of the dam.

Climatologists predict the drought will be permanent and the Fertile Crescent ‘will disappear this century.’

In 2011, the Iraqi government decided to let a two billion Euro contract to the Bauer Group, a Germany-based engineering company, to make the dam safe by constructing underground walls around its foundations. But the scheme has been on hold ever since, because of what the company has called the “political disturbances.” Nor is there progress on a plan to build another dam a little way downstream as a safety net to catch any moving wall of floodwater.

Despite the concerns, Iraqi government engineers have so far managed to keep the Mosul Dam working and the reservoir behind it full. To keep it intact, they have worked around the clock for years, pouring tens of thousands of tons of cement into grouting holes beneath the dam.

Last week, I contacted an Iraqi civil engineer, Nadhir Al-Ansari, now based at the Lulea University of Technology in Sweden, who had been planning to visit the dam this month to check on its state. He told me: “I had to cancel the trip. I tried to call the director of the dam on his personal mobile and there is no answer.”

The reservoir can hold more than 11 cubic kilometers of water. The U.S. Army Corps of Engineers’ report cited a 2004 study by Mark Wheeler of the U.S.-based engineering firm Black and Veatch that predicted a failure of the dam would flood Mosul city within three hours. The flood wave would peak at 20 meters high. Within 72 hours, it would hit Baghdad, still about four meters high.

Despite such disasters in the making, many more dams are on the drawing boards. The Kurds want to complete the half-built Bekhme Dam on a tributary of the Tigris in Iraq close to the Turkish border. At 230 meters high, it would be the largest yet in Iraq. And both Turkey and Iran are capturing ever more of the flows of rivers that drain into Iraq, with Turkey building dams on both the Tigris and Euphrates.

Last month British researchers Furat Al-Faraj and Miklas Scholz of the University of Salford reported the demise of the Diyala River. Called the Sirwan in Iran, it is a major tributary of the Tigris, watering crops east of Baghdad. But in the past 15 years, the Iranians have reduced its flow by more than half. And worse is to come in 2018, when the Iranians plan to complete a new dam.

The Karkeh River once helped fill the Mesopotamian marshes. But Iran now takes so much of its water for irrigation that the river rarely crosses the border.

This dam-building flies in the face of growing evidence that the entire region is becoming drier. Below average rainfall has persisted for almost a decade now. Less rainfall combined with water diversions have reduced the flow of both the Tigris and Euphrates by more than 40 percent in recent years, says Al-Ansari. Some analysts say that the intense drought of 2007-2009, and the resulting failed crops, helped trigger Syria’s civil war by creating social breakdown as farmers became refugees and food prices soared in cities.

Japanese and Israeli climatologists predicted in 2009 that the drought is likely to be permanent and the Fertile Crescent, which has sustained the region for thousands of years, “will disappear this century.”

As the rivers empty, the temptation to fight over what remains can only grow. It is a true tragedy of the commons.