Climbing a narrow, switchback road carved into a sheer Andean mountainside, my 4-wheel-drive Jeep slowly rose past the tree line to an elevation of 10,000 feet. There the gravel road ended and I found myself on the fringe of Colombia’s Santurban páramo, one of the world’s strangest ecosystems. 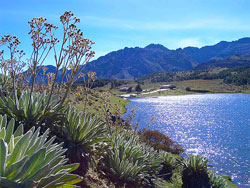 Páramos are found in four countries in the Andes, including here in western Venezuela. WIKIMEDIA COMMONS

Walking out on a windswept, frigid swamp, with clouds swirling overhead, I slowly took in the eerie páramo landscape as brief bursts of sunlight broke through the gloom. Dotted with lakes, the páramo was covered in grasses and scrubby plants.

Like 34 other high-elevation, neotropical ecosystems that make up Colombia’s archipelago of páramos, Santurbán is a repository of large amounts of rain generated by colliding air currents. These storehouses are the primary sources of clean water for numerous cities, including the capital, Bogotá; Cali; Medellin; and Bucaramanga, located roughly 25 miles west of Santurbán.

But páramos are special for another reason: Many lie near precious metal deposits and are being targeted for large-scale projects to mine gold and other minerals. Two of the biggest projects on the drawing boards are gold mines planned near Santurban by Canada-based Eco Oro Minerals and Brazil-based AUX, part of the natural resources empire controlled by Brazilian mining and oil billionaire Eike Batista.

Desperate for foreign investment, the government of former President Alvaro Uribe granted hundreds of preliminary mining permits from 2002 to 2010, many of them for projects located close to or, some say, within páramo limits. Companies like Eco Oro and AUX have since spent millions of dollars on engineering studies in anticipation of ultimately getting the green light to start mining.

But Colombia’s current president, Juan Manuel Santos, who governs at a time when the Colombian economy is booming, has put the brakes on many mining megaprojects, heeding the concerns of environmentalists and municipal officials that many of the projects would threaten delicate páramo ecosystems and endanger water supplies. Santos has suspended all new mine permitting until environment minister Luz Helena Sarmiento issues new, more precise guidelines, which she is expected to release in coming weeks.

Although Colombian law forbids mining within páramo limits, it is vague on their definition. (Páramo ecosytems — concentrated mainly in the Andean regions of Colombia, Peru, Ecuador, and Venezuela — generally range from about 9,000 feet to 15,000 feet in elevation.) The environment ministry in 2011 commissioned the Alexander von Humboldt Institute, a Bogota-based biological research foundation partly financed by the government, to come up with a more comprehensive definition of páramos. The Humboldt study, which has not been made public, was presented to Sarmiento late last year.

What could cause miners the greatest headache is if Sarmiento accepts the study’s recommendation that the new páramo definition include a 400-meter (1,300-foot) “belt” or buffer that in effect would expand a páramo by that much altitude below the 9,000-foot elevation now generally considered off limits to mining, according to a Humboldt Institute official who spoke on condition of anonymity because of the political sensitivity of the issue.

“We are an institute that investigates biodiversity, and so our recommendations went for maximum protection of the páramos,” said the official, a leader of the two-year study. “That’s why we proposed a ‘transition belt’ below the páramo that we knew might impact existing miners.”

The two proposed mining projects near Santurban have generated enormous controversy, as both almost certainly would use a cyanide-leaching process to extract gold, which could contaminate water supplies as they flow down from the Santurban páramo. Both the Eco Oro and AUX projects are located less than a mile west and downhill from the páramo. Ecologists fear that chemicals and tailings from the mine could pollute the Angostura River and underground aquifers, and that the impacts of mining in the remote area would inevitably spill over into the Santurban protected area.

On the other side are business interests and some local residents who want the jobs and economic benefits that the mining projects will generate.

Biologist Santiago Madrinan, a professor at University of the Andes in Bogota, says that once páramos regions are altered on a large scale, they rarely regain their water storage capacity. A cement plant built in the Chingaza páramo above Bogota in the 1980s disturbed the ecosystem and has since contributed to increased flooding of Bogota and other areas, he said.

Randall Scott, a botanist at Northern Arizona University in Flagstaff who studies Andean páramos, noted that mines in or near páramos in other countries have contaminated water supplies and said páramoo water is too important for cities to put at risk.

“Water contamination — as has been experienced by folks in Cajamarca, Peru, due to the leach fields associated with the massive gold mine situated directly above that city — is not just going to affect the immediate communities, but everyone downstream,” Scott said. “And the impacts of mining will undoubtedly destroy numerous undocumented plant, insect,and other animal species well beyond the area of immediate impact.”

Both AUX and Eco Oro insist that their projects don’t pose threats to Bucaramanga’s water supplies. “There is a lot of disinformation out there, ” Carlos Alberto Londono, sustainability manager of AUX mining, said at the company’s Bucaramanga offices. “We have not finished our hydrological studies, so it’s premature to claim we would affect the water supply.”

Londono also noted that a new dam and reservoir project on the Tomo River will provide Bucaramanga with a major new source of water. “Our project could — but not necessarily — affect 15 percent of the city’s water supply, but we don’t think it will,” he said. “We have all the technology we need to make sure water quality is not affected.”

In an interview, AUX executives said Colombia stands to lose significant economic benefits if mining projects are left in limbo as a result of the pending government guidelines for mining near páramos. They said the gold mine would bring $2.2 billion in investment to the region and employ 3,000 people in its initial phases.

AUX estimates that its mine near the Santurban páramo contains at least 8 million troy ounces of gold reserves worth more than $10 billion at today’s prices. “The worst part of this process is the uncertainty and the social problems the delays have caused for the people we have had to lay off,” said Londono “We are flexible, but our flexibility has limits.”

Environment Minister Sarmiento’s new guidelines on páramos could derail proposed mining projects elsewhere in Colombia, including AngloGold Ashanti’s large-scale La Colosa gold mining project in Tolima state, sources said. And her decision will affect others besides mining companies and their employees. Sarmiento must determine how to financially compensate hundreds of Colombian families, mostly farmers, already living on páramos illegally and who presumably will be forced to relocate. Potato and onion farming have been a chief cause of páramoo disturbances in Santurban and elsewhere in Colombia.

“She can’t just say mining and farming is prohibited and adios,” said the Humboldt Institute official, who added that Santurban farmers produce 80 percent of the region’s onions. “She has to recognize the social complexity of the situation and propose economic alternatives for the people living there. No line, wherever it is drawn, is going to avoid that headache, so her job is not an easy one.”

Although páramos have been recognized by scientists since the 1700s, they are only now starting to attract serious study, and that research has turned up some astounding facts, according to Madrinan at the University of the

The mining of rare earth metals, used in everything from smart phones to wind turbines, has long been dominated by China. But as mining spreads to countries like Malaysia and Brazil, scientists warn of the dangers of the toxic and radioactive waste their mining and processing generates. READ MORE

Andes. Among the findings is that páramos are “species pumps” where new life forms are established far faster than in most other ecosystems, partly because páramos are constantly expanding and shrinking as climate conditions change. Roughly 5,000 plant species have already been identified in páramos ecosystems, including the pale green, furry frailejan, which aroused the curiosity of Alexander von Humboldt on his visit to Colombia in 1801. Madrinan noted that some páramos are already beginning to shrink as temperatures rise, and that intensifying climate change could further threaten these unique ecosystems.

Francisco Ciri, a Bogota-based independent biologist, said the expansion of the Santurban páramo’s limits to include the 400-meter “belt” could very well derail major mining projects. But any new limits, he said, must be accompanied by better government vigilance against illegal mining, which already plagues other parts of Colombia and which often involves powerful criminal gangs and left-wing rebels.

The departure of legal miners from the Santurban páramo area would almost certainly create a vacuum that would be filled by illicit groups looking to exploit the rich mineral veins on which foreign investors like AUX and EcoOro have staked claims, Ciri said. “You have to assume that criminal activity will increase in an area where there is already high unemployment,” Ciri said.