When the NAACP recently released a report on the disproportionate effects of coal-fired plants on minorities, Jacqueline Patterson led the efforts to spread its message that these facilities were “killing low-income communities and communities of color.”

Patterson is the Environmental and Climate Justice Director for the venerable civil rights organization — a job whose purpose is sometimes questioned by the NAACP’s own constituents. As Patterson puts it, “Some of the communities I work in were like, ‘Well, we’re dealing with double digit unemployment and people dying of AIDS, people being racially profiled, high murder rates. How is melting ice caps and polar bear extinction going to become a priority for us?’”

In an interview with Yale Environment 360 contributor Diane Toomey, Patterson discusses how she answers that thorny question and outlines the reasons behind the NAACP’s campaign to shut down coal-fired plants. She also talks about the often-difficult relationship between environmental justice organizations and major U.S. green groups. “We need to have tough conversations around organizational culture,” she says. “And we need more joint strategizing on how we can collaborate more effectively.”

Yale Environment 360: A few months ago, the NAACP released a report entitled “Coal Blooded: Putting Profits Before People.” It examined the effects of coal-fired plants on minority communities in the U.S. Paint a picture of who is most likely to live near these power plants.

Jacqueline Patterson: Thirty-nine percent of the people living near coal-fired power plants are people of color, so what’s absolutely true is that there are a disproportionate number of people of color living next to these plants. Seventy-eight percent of African Americans live within 30 miles of a coal-fired power plant. We also discovered that Latino communities, as well as indigenous communities and low-income communities, are more likely to live next to coal-fired plants.

e360: The report assigned a so-called environmental justice performance score to 378 coal-fired power plants in the U.S. The score was based on the amount of sulfur dioxide and NOx [nitrogen oxide] emissions, the number of people living within three miles of the plant, and the median income and percentage of people of color in that population. Seventy-five of these plants were found to be failing. Define “failure” for me in this context.

Patterson: We used an algorithm based on those five factors, and then we ranked them according to the score they received. The ones that were failing were the ones that had the worst EJ [environmental justice] score, the ones that were emitting the most sulfur dioxide and nitrous oxide to the most people, and with the greatest proportion of people who are of color and low-income.

“An African American child is three times more likely to go to the emergency room for an asthma attack than a white child.”

e360: The report focuses on the effects of three pollutants coming from these plants: sulfur dioxide, NOx, and particulates — all of which have known health consequences, including asthma and other respiratory problems. Talk about the incident rate of these illnesses in minority communities compared to white communities.

Patterson: An African American child is three times more likely to go into the emergency room for an asthma attack than a white child and twice as likely to die from asthma attacks than a white child. African Americans are more likely to die from lung disease, but less likely to smoke. When we did a road tour to visit the communities that were impacted by coal pollution, we found many anecdotal stories of people saying, yes, my husband, my father, my wife died of lung cancer and never smoked a day in her life. And these are people who are living within three miles of the coal-fired power plants we visited.

So both statistically, in terms of health surveillance data, and anecdotally, in terms of what you’re hearing from community members, we see that there is a higher incident of the very diseases that are impacted by these pollutants in African American communities.

e360: Have there been enough well-designed studies done on the health of communities living in very close proximity to coal-fired plants? 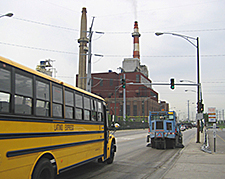 Patterson: We definitely need more in the way of these studies — that was one of the recommendations from the report. The Harvard School of Public Health did a study specifically on the Fisk and Crawford plants in Chicago, which was instrumental in helping to garner public support for shutting down those two plants [which were closed last year]. But we need more sophisticated studies.

e360: There have been a number of coal-fired plant closures in recent years thanks in part to cheaper and more abundant natural gas, and new stricter [U.S.] pollution regulations that will kick in by 2016 will make coal-fired plants more expensive to operate. In fact, five of the 12 of the power plants that received the lowest rating in your report have closed or have announced plans to close. How do you tease out the effect of activism versus other factors that are leading to these plant closures?

Patterson: We’ve long acknowledged that activism alone hasn’t been responsible for closing down these plants. We certainly say in all of our conversations that the boom in natural gas has had a significant effect on the cost of running these plants. There’s no denying that. I think that you can really only tell on a plant-by-plant basis the extent to which the community activism is going to have a significant impact.

e360: Since the report has been released what kind of feedback or outreach have you received from the owners of any of these plants?

Patterson: Some plant owners have said that the plants aren’t harmful to human health, that there are too many other pollutants in the area to be able to tease out the effects of the plants and that there’s no alternative to running these plants or the alternatives are too expensive and the rate payers would be the ones that would have to pay for that.

e360: For you, I would imagine nothing trumps the issue of health in the communities that live near these plants.

“You can only tell on a plant-by-plant basis the extent to which community activism is going to have an impact.”

So I wouldn’t necessarily say that we are absolutely saying that health trumps all because we don’t want to impose that on the community when they might not necessarily believe that. They might say, “Well, OK, my life might be 10 years shorter, but at least I’ll be working the whole time.” It’s a community-by-community calculation, conversation, and strategy.

e360: You just referenced working with the community at the grassroots level. How would you describe the working relationship between grassroots environmental justice activists and major anti-coal advocate groups?

Patterson: I think it varies from place to place depending on how well those national organizations put in the work and relationship building and the how open the grassroots organizations are to receiving it. I know that in Chicago, with the Fisk and Crawford [coal-fired] plants [which were shut down last year], the Little Village Environmental Justice organization was at the head of the work that was being done. And they did partner with groups like Greenpeace and the Sierra Club and the Rainforest Action Network, who brought new resources — be it skills or other technical assistance or organizing experience. And they had a successful collaboration.

Patterson: Yes, that has definitely been a historical challenge. That is something that is evolving. Every day we see advancement along those lines in terms of greater sensitivity and greater engagement [by U.S. environmental groups]. I would say that we’re on a positive trajectory around that.

e360: There is a notorious lack of diversity amongst the staff and board members of major environmental organizations. From your viewpoint, what are the reasons behind that?

Patterson: That’s a good question. We’ve begun to address that issue. We now have a weekly “black-green pipeline” career digest in which we send out jobs and training opportunities in the green sector. But I think the challenge we’ve observed is multifold. There’s been a historic failure to articulate the impacts of these issues on communities of color and low-income communities in the United States.

“We have communities that are losing people every day from toxic exposures.”

Even when I started to do this work at the NAACP, there were questions. Some of the communities that I would work in were like, “Well, we’re dealing with double-digit unemployment and people dying of AIDS, people being racially profiled, high murder rates. How are melting ice caps and polar bear extinction going to become a priority for us in light of all these issues?”

So I really had to do a lot of messaging around how climate change is a threat multiplier for those very things that they talk about. For example, extreme weather events have been impacting our right to safe housing, and shifts in agricultural yield that we see from climate change affect our right to food and water. And various environmental injustices, including exposure to toxins, impact our health. But unfortunately, there are just too few people who are making those connections. And if you’re a person who manages to get into one of these [major environmental] organizations, for whatever reasons, you feel this immense weight.

e360: You mean the weight of being the only person of color in an organization?

Patterson: Being a person of color, having to be that ambassador for bringing in a whole different way of thinking, analyzing, working, collaborating. That’s just a huge mountain to climb. When you come in as a person of color to those organizations, they expect you to be the one to pull everybody up that mountain, and that’s just a lot to ask of anyone.

e360: Van Jones, a former advisor to the Obama Administration on green jobs and an African American, has been quoted as saying we have a segregated environmental movement. Would you agree with him?

e360: When you say different focus, is it a matter of one saving wilderness and biodiversity and grassroots organizations that are much more interested in toxic exposure and saving urban parks?

Patterson: Yes, I would say that. We have communities that are losing people every day from these toxic exposures, so understandably their focus is more on protecting people.