To bring a kaleidoscopic glimpse of tropical marine life into their living rooms, aquarium hobbyists depend on a steady supply of live fish and invertebrates from the world’s imperiled coral reefs. Bagged and boxed, the animals are flown in from biodiversity hotspots like Indonesia and the Philippines in the so-called Coral Triangle. But poor handling and long supply chains have raised concerns that too many creatures die in transit or soon after arrival. Some marine populations have taken a hit, and destructive collection practices — including the use of cyanide — have damaged precious reef habitat.

In Hawaii the issue has ignited into full controversy, though scientists say the trade there is better managed than in many other regions. For several years, activists have sought to get aquarium collection banned through lawsuits, legislation, and public pressure. In May, Sea Shepherd Conservation Society, best known for its confrontational anti-whaling crusades, launched a new campaign to end the trade in Hawaii — and eventually elsewhere — for good.

That effort comes on the heels of several failed attempts to introduce sustainable practices by more mainstream conservation groups, scientists, and industry representatives. Meanwhile, other new efforts are raising hope in some quarters that the trade might be able both to satisfy first-world hobbyists and support sustainable livelihoods for people in developing nations. These initiatives include raising fish and coral in aquaculture facilities specifically for the aquarium trade, as well as a promising new method for detecting fish caught after cyanide has been used to stun them.

“[In] Indonesia and the Philippines there are serious concerns about reef damage and fish mortality from the trade,” Brian Tissot, a marine ecologist at Washington State University, said in an email. A 2010 paper in the journal Marine Policy, on which Tissot was the lead author, called on the U.S. to take the lead in reforming the aquarium trade and its bigger siblings — the jewelry, home décor, and curio trades in dried corals, shells, seahorses, and the like.

“It’s very scary, and of course the impacts on those ecosystems are largely unknown,” he says of the magnitude of marine life that those trades are removing from reefs. “That’s what we worry about.”

Critters destined for aquariums are plucked from their home reefs in at least 40 countries throughout the tropics, with the Philippines and Indonesia supplying about 85 percent of the world’s aquarium fish. Poor fishermen typically sell their catch for pennies per fish into a complicated chain of dealers and middlemen. More than half the fish and other marine creatures land in the U.S., the world’s number one importer, trailed by Europe and Japan.

A consumer trend favoring tanks that emulate reef ecosystems — shrimp, corals, anemones, etc. — has increased the diversity of the catch. Around 2,000 fish species, 150 stony coral species, and more than 500 other invertebrate species now enter the trade, totaling perhaps 30 million reef fish and other animals annually, according to Andrew Rhyne, a marine scientist at Roger Williams University in Rhode Island and the New England Aquarium in Boston, who with colleagues has been scrutinizing trade records in unprecedented detail. 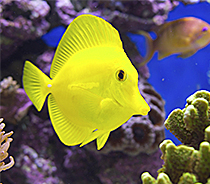 Retail prices vary widely. A common fish like the green chromis will set you back just a few bucks, but collectors have reportedly offered as much as $30,000 for rare individuals like peppermint angelfish. Globally, the trade may be worth up to $330 million per year, according to a report from the United Nations Environment Program.

Some scientists and conservationists worry that the industry is further taxing coral reef ecosystems already gravely threatened by rising water temperatures, ocean acidification, and pollution. They say the aquarium trade has taken its heaviest toll in the Coral Triangle, which encompasses a large area of the Pacific Ocean, including the waters of Indonesia, the Philippines, and Malaysia. A chief issue in this region is the collateral damage to reefs, fish, and other marine life when fishermen break coral to get at their quarry, or, worse, squirt sodium cyanide and other poisons to stun fish.

In a 2012 analysis of a year of U.S. declarations forms and invoices from aquarium trade importers, Rhyne’s team found that most species entering the U.S. are abundant over wide areas, and therefore unlikely to be seriously harmed by the trade. However, although few studies have been done, a number of documented cases exist where the trade depleted or virtually eliminated some species in certain areas, experts say.

One such example is the blue tang, the 12th-most popular imported fish, which is overfished in Indonesia, Rhyne says. Retail prices are already high — even topping $100 for large blue tang — and the fish’s starring role in Disney’s forthcoming animated film, “Finding Dory,” will surely spike demand, just as “Finding Nemo” did for clownfish. “Fishers will have to travel much further distances, further increasing handling stress, which in turn increases mortality, which increases collection pressure,” Rhyne wrote by email.

Collectors have reportedly offered as much as $30,000 for rare individuals like peppermint angelfish.

In addition to the ecological concerns, there are ethical ones. Robert Wintner, Sea Shepherd’s new vice president, and the Humane Society of the United States, among others, argue that the trade and hobby are cruel and too often deadly, and that a tiny tank is no place for a wild animal.

The toll on reef life in Hawaii, where Sea Shepherd’s pugnacious campaign is focused, is hotly disputed. Wintner — a longtime activist on the issue there under the nom de guerre of Snorkel Bob — says the problems are visible. He rattles off “horror stories” perpetrated by the industry that include the devastation of hermit crab, yellow tang, and featherduster worm populations, as well as smashing up coral to extract the latter.

“These guys are taking obscene amounts of fish,” Wintner says. “They are ‘Hoovering’ the reefs.” He dismisses many of his critics as complicit in the industry and describes most attempts to reform the business as greenwash.

Yet industry members and some scientists, including Tissot, who has studied the Hawaiian trade for years, say the Sea Shepherd campaign’s claims
grossly exaggerate the impact in Hawaii. They say the business is much better studied and managed there than in the Coral Triangle, and shorter supply chains and gentler handling mean captured fish have far better survival odds.

Previous high-profile attempts at reforming the trade have collapsed. The Marine Aquarium Council launched a decade-long effort to train collectors and others in the supply chain to adhere to tough voluntary standards, but that initiative largely fell apart by 2009 because its sustainability claims were not verifiable, according to one analysis. And a bill drafted by several environmental groups to set sustainability standards for coral-reef wildlife entering the U.S. has foundered after the death of its champion, Senator Daniel Inouye of Hawaii, last December.

Some wholesalers are taking measures to improve the traceability of fish to avoid buying from unreliable suppliers.

The criticism has prompted both bristling and soul-searching among hobbyists and business people. “From an environmental perspective there could be specific species or specific areas that are pressured, but from a global perspective it’s nil,” says Chris Buerner, president of Los Angeles-based Quality Marine, a leading aquarium animal wholesaler. Buerner, who served on the board of the Marine Aquarium Council, notes that the volume of fish taken from the sea for aquariums is minuscule compared to what’s taken for food. Nonetheless, he says it’s a good thing if all the scrutiny pushes the industry toward lower-impact practices, adding, “There are things the trade really should work hard to improve.”

Some public aquariums, retailers, and wholesalers like Quality Marine are taking measures to improve their practices, such as formalizing sustainability standards for purchased fish and improving animals’ traceability to avoid buying from unreliable suppliers, Buerner says. And a new industry-friendly eco-labeling system now under development, called SMART, would require adherence to catch quotas.

A recent breakthrough in developing a test for cyanide exposure in fish is being widely hailed. Fishing with the poison is illegal in most countries, but remains prevalent in about 15 nations that supply the aquarium business, as well as the much bigger trade in live reef fish for Asian food markets, according to a 2012 report by Defenders of Wildlife. Such a test would allow the industry to reject cyanide-caught fish, and U.S. law prohibiting the import of illegally collected wildlife could be applied, which could help finally eliminate the poison from the aquarium trade, experts say.

Coral aquaculture is even farther along. For example, just a few years ago, Indonesians were hacking tons of coral from their reefs for export. In 2011, Rhyne says he flew to Bali to help advise the nation’s young coral mariculture program, and was impressed to discover an advanced system already in place. More species were under cultivation when he returned last summer. One of the biggest producers was a shell and coral exporter who had harvested wild corals for decades but now has a prosperous coral farm with numerous employees in the unlikeliest of places, just offshore from a cement factory and a ferry terminal. The area’s coral industry is rapidly moving from a wild fishery to aquaculture, Rhyne says.

Ironically, while the U.S. government urged Indonesians toward aquaculture, a government proposal to list 66 coral species under the Endangered Species Act would likely destroy the fledgling business, Rhyne says.

Even so, Rhyne and others see in coral aquaculture an inkling of how the aquarium hobby could help reef-dependent humans and animals alike. If you take away a fish collector’s livelihood, he’ll likely turn to another unsustainable fishing practice to feed his family. But done right, the aquarium trade could give people living in poverty both an income and a reason to preserve their reefs. It won’t be easy, though, Rhyne acknowledges.

“If your goal is to conserve coral reef ecosystems then you have to… look at the people involved in these trade chains,” says Rhyne. “If you don’t do that then you can never touch the conservation.”

Correction, July 8, 2013: An earlier version of this article reported that dynamite was used to collect fish for the aquarium trade. Experts say dynamite is used in the live reef fish trade for restaurants, but not for aquarium fish — a point also made in a United Nations Environment Program report.