Climate scientists trying to figure out how fast the world is warming have a hard task on their hands. But, says meteorologist Brian Soden at the University of Miami’s Rosenstiel School for Marine and Atmospheric Science, rainfall presents an even tougher nut to crack. “You can be driving down the highway and at one stoplight you’re in sunshine and at the next you’re at a downpour,” he sighs. “Temperature isn’t like that.” 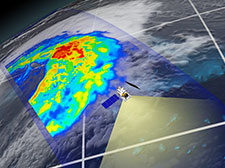 The vast variability in precipitation over space and time has made it one of the most difficult climate variables to measure. The UN’s Intergovern-mental Panel on Climate Change has concluded that a warmer world should overall be a rainier one, with wet areas destined to get wetter and dry areas drier. But the certainty in rainfall predictions is frustratingly low. Researchers still don’t know what sorts of clouds lead to what sorts of rain; when and where and how much water evaporates into clouds, thereby moving energy around the globe; or if rainfall really will increase as theory predicts.

Some of that is now set to change thanks to the launch of the joint Japanese-NASA Global Precipitation Measurement (GPM) observatory in February. The satellite is the first designed to detect harder-to-spot precipitation, including drizzle and snow, and greatly expands the well-watched part of the planet from the tropics north to Iceland and south to the tip of the Antarctic Peninsula.

Launched in February, the GPM observatory marks a huge step for rainfall measurement.

GPM marks a huge step for rainfall measurement, says Robert Adler, an atmospheric scientist at the University of Maryland and one of NASA’s Precipitation Measurement Missions principal investigators. The resulting data will be made available to disaster relief agencies within 1-3 hours, which should help to get help to areas hit by flash floods. The information will be plugged into basic science questions like what sorts of aerosols make for rainier clouds. And it will extend the currently-short satellite record, says Soden, giving modelers the data they need to validate their predictions. “Modelers better be excited about this,” says Gail Skofronick-Jackson, deputy project scientist for GPM at NASA’s Goddard Space Flight Center. “I’m going to be mad if they’re not.”

Measuring rainfall is one of those things that seems deceptively simple. “It sounds really easy, like just putting a bucket out,” says Adler. “It is more complicated than that. Globally, it’s been a struggle for a long time to understand how precipitation is distributed.”

The gold standard for rainfall measurements are rain gauges, which simply look at the height or weight of water collected in a container. Today there are about 6,000 of these around the world, contributing data to international databases like the Global Precipitation Climatology Project, with some national compilations dating back to the 1860s or earlier. But these records still present problems. Like temperature sensors that are sometimes installed accidentally in the cool shade or near hot slabs of concrete, rain sensors are sometimes placed comically too close to trees that grow and eventually shelter the buckets. Windy days can blow water out of the gauges. And, most importantly, the spatial coverage is extremely limited. 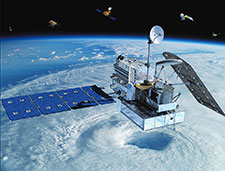 The GPM observatory greatly expands the areas of Earth where rainfall is monitored. NASA

There are no rain gauges at sea, for example. And the developing world often has few stations or isn’t inclined to share its data for geopolitical reasons. For instance, where conflicts rage about access to river water passing from one nation to another — as from to India to Pakistan, for example — there may be reasons to keep information about alternative access to freshwater resources from rain under wraps. With gauges alone, says Adler, “we didn’t have good information” for more than 75-80 percent of the planet.

Even the small distance between stations in a densely-monitored region can be problematic. Skofronick-Jackson remembers one field expedition where the researchers just missed a major storm. “In one event we had something like 20 inches of snow,” she says, “and all our guys on the ground were sitting there waiting at 2 a.m. for the snow to come through, and they only got a couple of centimeters. They were so sad. Then their car nearly got stuck in the snow getting back to the hotel.”

Other tools can help to make up the difference. For example, ground-based radar stations sweep out a horizontal signal that bounces off raindrops to fill in some spatial gaps. But the biggest improvement has come from satellites, which have been collecting data since the 1980s — in particular the Tropical Rainfall Measuring Mission (TRMM, pronounced ‘trim’), launched in 1997 by the Japanese Space Agency (JAXA) and NASA, which together also launched the GPM satellite this year.

Theory says that a warmer world should hold more water in its air.

“TRMM was designed to measure tropical rain, which is where most of the interesting science questions were at the time,” says Skofronick-Jackson. “Most of that region is ocean, and that’s where the heat comes for convective storms.” Researchers keen to know how the heat of the sun, held in by a blanket of carbon dixoide, was pumping energy into earth’s system, needed to know how much water was evaporating at the equator. “You can’t measure the energy movement, but you can measure the water,” says Skofronick-Jackson. “That’s climate change right there.”

But TRMM — surprisingly still running strong after 17 years of operation — is in an orbit that can only see from 35 degrees north to south, from the Mediterranean Sea to the southern tip of South Africa. And its frequency bands are designed to catch tropical moderate-to-heavy rain, down to about 0.5 millimeters per hour. “It doesn’t account for drizzle, and it doesn’t account for snow,” says Skofronick-Jackson.

Thanks to these challenges and the relatively short period of good satellite coverage, climate researchers still have a hard time saying what’s going on with our planet’s precipitation. Theory says that a warmer world should hold more water in its air: about 7 percent more for every degree of warming. That bump in humidity should mean about 1-2 percent more rain per degree of warming, says Adler, but that number is far less certain. And the additional rain should be focused in the areas that are already wet: but that’s a general conclusion that only “holds when you close your eyes and squint” at the map, says Soden — at the local scale it doesn’t necessarily hold water.

In terms of the most basic numbers, TRMM scientists thought they had pinned down the total amount of rainfall falling on our planet each year to within about 5 percent, says Christian Kummerow of Colorado State University, a former project scientist for TRMM. But then more recent calculations of solar radiation deriving from NASA’s 2006 CloudSat view of cloud cover hinted that those rain estimates might be 10 percent too low. “Whenever I get asked about this I say just wait six months,” says Kummerow. GPM should be able to answer this, he says, by expanding the monitored region to 65 degrees N and S. “The poles are a desert, but high latitudes like Seattle and Vancouver — they get a lot of rain,” he says — perhaps more than estimated from TRMM data.

GPM should provide modelers data needed for tuning their climate models to include clouds.

The more interesting question is whether rainfall is really increasing as the planet warms. The IPCC’s 2013 report looked at four different datasets. None could say, within error, whether rainfall had increased or decreased since the 1950s. “We haven’t seen any strong indication of an increase in precipitation,” says Adler. “The models say we should, but we don’t see it yet.” In particular, TRMM’s two different rain-measuring instruments gave conflicting results during periods of El Niño-Southern Oscillation (ENSO), when the world gets slightly warmer: One saw more rain, and the other didn’t. Again, says Kummerow, GPM should be able to sort out which instrument was right.

Rising Waters: How Fast and How Far Will Sea Levels Rise?

Although the latest U.N. climate report significantly increases its projections for sea level rise this century, some scientists warn even those estimates are too conservative. But, Nicola Jones reports, one thing is certain: Predicting sea level rise far into the future is a very tricky task.READ MORE

The only thing the IPCC could say with high confidence is that precipitation over land in the Northern Hemisphere has gone up, with heavy rainfall events getting heavier. Xuebin Zhang of Environment Canada and colleagues recently found that the amount of rain falling in a single deluge day has gone up in the Northern Hemisphere by 3.3 percent from 1951-2005. Climate models haven’t got a good grip on this yet. Soden’s 2008 study, which forged the first link between warmer weather and more powerful rainstorms, found that extreme rainfall events were under-predicted by models.

GPM should help through better monitoring of rain droplet size and a 3D view of clouds, with data for every 500 meters of elevation. That will give modelers badly needed data for tuning their climate models to include clouds, says Kummerow, which in turn should help resolve things like predictions of deluges. Overall, says Adler, GPM will be an even bigger step up for rain watchers than was TRMM.

The GPM is now being put through its paces; cleaned up datasets will be available for use by June at the latest, the team says. Still, it will be a while before the new data yield fruit: The decades needed to put observations in context makes data gathering a “slow and tedious process,” says Francis Zwiers, director of the Pacific Climate Impacts Consortium in Victoria, British Columbia.

“In terms of constraining climate models, what we really need is a long record,” says Soden. “GPM is really trying to do that.”