While computer-generated visions of floodwaters sweeping across Wall Street and inundating Manhattan island have come to represent apocalyptic predictions of climate change, the reality is that it won’t take an apocalypse for rising sea levels to threaten the integrity of the complex infrastructures that provide New York and the world’s major coastal cities with water, sanitation, transportation, power, and communications.

Adapting to this reality has become a key part of future planning for London, Rotterdam, St. Petersburg, Tokyo, and Seattle, as well as low-lying cities across Asia. In New York City the effort has brought together scientists, government agencies and public and private utilities in an effort to comprehend the effects of climate change on a city with a 570-mile coastline and where 8.5 million people live only about 10 feet above sea level.

With only a foot and a half of sea level rise — a realistic prediction for 2050 — a storm as severe as Katrina could require New York City to evacuate as many as 3 million people. A three-foot rise in sea level — which could well occur by the 2080s — could turn major storms into minor apocalypses, inundating low-lying shore communities in Brooklyn, Queens, Staten Island, and Long Island; shutting down the city’s metropolitan transportation system; flooding the highways that surround the city; and rendering the tunnels that lead into the city impassable.

And what if humankind continues to pump greenhouse gases into the atmosphere at the current, massive rate and the Greenland ice sheet and West Antarctic Ice Sheet melt faster than predicted, causing sea levels to rise as much as six feet or more? That, concluded a report released earlier this year by the New York City Panel on Climate Change (NPCC), “would place much of the city underwater — and beyond the reach of any protective measures.”

Modeled on the U.N.’s Intergovernmental Panel on Climate Change (IPCC), the NPCC’s report is the first part of an effort to adapt the city’s structures and infrastructures to future climate change. Under the co-chairmanship of researchers Cynthia Rosenzweig of NASA and Columbia University, and William Solecki of the City University of New York, the NPCC took the IPCC’s global climate models and scaled them down to develop projections of future temperature, precipitation, and sea level rise.

Their not-surprising conclusion was that despite the city’s — and the world’s — efforts to implement reductions in greenhouse gas emissions and energy use, New York City would have to begin preparing now for the changes to come, to develop a “risk-based, cost-benefit” adaptation strategy that would increase the city’s resilience to its changing climate, as well as give it the capacity to withstand the expected but unpredictable meteorological extremes.

While storm surges may be the most catastrophic threat, steadily rising temperatures may represent the most difficult challenge. Mean temperature in New York City may rise by two, five, or even as much as 7.5degrees Fahrenheit by century’s end and make the city’s climate close to that of present-day Raleigh, N.C. The milder winters with few days below freezing and little snowfall — just about the only good news in the report — will be offset by long summers, with a third of the days above 90 degrees and marked by extended heat waves, frequent droughts, and more and more intense storms. By the end of the century, one-in-ten-year floods will come once every two to three years.

An Adaptation Task Force, made up of some 20 city departments, New York State and interstate authorities, and power and communications industries, has begun developing an inventory of infrastructures at risk. Working with local communities they hope to develop strategies — from keeping development away from the waterfront, to maintaining sewer systems, to evacuation plans, to protecting waterfront neighborhoods.

The Department of Buildings will reassess building codes to reduce energy use and make certain that homes can avoid flooding and high-rise apartment buildings can withstand increased storm winds. The city’s Office of Emergency Management is updating its floodplain maps to bring them into correspondence with predictions of rising sea level and expected storm surges.

While the task force’s final recommendations will not be released until the end of the year, some basic adaptation strategies are already evident. Some measures — as Adam Freed, the mayor’s liaison to the task force, points out — will be nothing more than making certain that systems already in place are working efficiently. That means making sure, for instance, that storm sewer catch basins are cleaned in anticipation of heavy rains, or that basic precautionary measures are taken, such as adding high-flow-level storm sewers and developing water retention basins on building rooftops to control runoff. Once these basic steps are taken, however, things become more expensive and complex.

A new waterfront power generating station has been built to withstand a four-foot seal level rise.

Concern for storm surges will require raising the elevations of many key electrical, transportation, and communications infrastructures. A new waterfront power generating station on the East River, for example, has been built to withstand a 4-foot sea level rise. Older structures that contain control rooms for mass transit operations may require being enclosed in waterproof containment areas to protect critical equipment. When the New York City Department of Environmental Protection (DEP) replaced the pumps at its Rockaway water treatment facility not far from the city’s Atlantic shore in Queens, engineers set the pump motors some 17 feet higher than they had been before. If they didn’t, a decent storm surge in 2050 would put the motors underwater and shut down a vital pumping station. The cost of this small, but key, adaptation? Thirteen million dollars.

While the costs of adapting to climate change will be in the billions of dollars, New York City’s working philosophy is that the costs of not adapting will be far greater. Gary Heath, Director of the Bureau of Operations for the DEP’s Bureau of Environmental Planning and Analysis, says that the NPCC’s report puts everyone on the same page, providing a common set of predictions that every agency can work with.

“Engineers want to know precisely,” he says, “when it will happen and how much it will be.”
From those predictions, he says, cost-effective adaptation strategies can be developed.

“Adaptation doesn’t take a wholesale plan,” Heath says. “It has to become part of an agency’s working philosophy. Once you recognize climate change as a risk to your infrastructure, then you take it into account in all of your designs and operations. You do it facility by facility.”

In a city the size of New York, says Heath, where a capital expenditure plan ideally projects needs and costs into the next century, an agency might evaluate a facility only once in five, 10, or even 20 years. So the changes made, such as those new pump motors, have to go beyond resolving immediate needs.

Should measured, gradual, and in situ steps prove insufficient, more radical — and expensive — proposals have been made. The most extreme of these would be to deal with the fact that the shape of New York City’s southern shoreline and harbor entrance — the geography that made it such an amenable port — acts, during a hurricane, to funnel winds and storm surges toward the city.

To counteract storm surges, the city may construct a storm barrier across New York harbor.

To counteract increasingly high storm surges, proposals have been made to construct one or more solid barriers across the entrance to New York harbor. The barriers — sea walls that allow water and ship traffic to flow through during normal tides but that can be closed during storms — might also protect New York’s major airports — LaGuardia, Kennedy, and Newark — whose runways are now just barely above sea level. They would also protect wetlands, beaches, and salt marshes faced with severe storm erosion. Storm surge barriers already protect the port cities of London and Rotterdam, for instance, although increasing sea levels may soon make these earlier barriers obsolete. Rotterdam’s climate change adaptation strategy calls for building a half-dozen new storm barriers.

While storm surges and flooding might require the most drastic adaptation measures, Freed says that the most chronic effect of climate change on New York will be increasing temperatures. Like cities around the world, New York will face the threat of rising death tolls from heat waves, the result of global warming combined with increasing and aging urban populations.

Counteracting the heat island effects of asphalt and concrete (summer temperatures in the city can be ten degrees higher than outside the city) will require incremental efforts. Adaptation measures already begun include new land-use requirements for open space, car-free zones, tree planting, and developing green spaces around parking lots and even on rooftops.

Rising temperatures will also worsen air quality. The city is seeking to institute congestion pricing to reduce the number of cars crowding its streets. It has begun efforts to cut back its own local emissions and energy consumption. These adaptation efforts will, it’s hoped, also serve to mitigate climate change effects. They may also bring cost savings. The city projects that its energy conservation measures will save billions over the next decade.

Adaptations not subject to engineered solutions may be far more difficult to devise and implement. The threat to the city’s Catskill Mountains water supply from extended droughts and heat waves, as well as from severe storms, will require a range of adaptations, from monitoring and metering water, to protecting watershed lands and forests.

Heath points out, for instance, that the amount of water flowing into the reservoirs declines when trees in the forests that surround them are in full 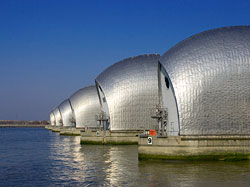 iStock
Floodgates across the Thames River in England

leaf. Longer growing seasons would mean substantially less water running into the reservoirs. The shortfall could be compounded by predicted long periods of drought that would further reduce flow and increase evaporation. On the other hand, Heath says that severe storms would create turbid runoff and could introduce pathogens into what is still an unfiltered water supply system. For the city, this means increasing stream and land use management efforts far north of the city limits and seeking restricted development along its watershed lands and forests.

New York City’s problems are not unique. Climate change presents complex and costly challenges to coastal cities around the world. London, like New York, recognizes that rising temperature will be its most urgent problem. It, too, is hoping to manage its heat island effect, implementing new land planning measures, including greening roofs and open spaces. London is encouraging the adaptation of building codes to minimize the need for air conditioning and to make it efficient and clean.

In Rotterdam, along with creating green roofs, the city plans to turn flood control barriers and levees into waterfront parks and turn water diversion canals into cooling waterways and “water plazas” within the city itself.

Adapting to climate change will be more difficult in cities in India, Asia, and Africa where infrastructures are already stressed by overpopulation and poverty, and where rising temperatures may bring increased risks of disease. Low-lying Bangladesh, which is especially susceptible to sea level increases, has proposed a $4.35 billion adaptation program.
What New York City now has that most of these other cities don’t, is a local model of climate change all its agencies can work from. But if the projections are wrong? If the world’s seas rise more rapidly than predicted by the IPCC and NPCC? Then, the result may be more than just a fantastic animation.