The Obama Administration’s recent announcement that it plans to regulate greenhouse gas emissions from existing coal-fired power plants evoked cries of protest and warnings of economic doom from the political right, and praise from the center and the left. As the controversy over the proposed rules continues to unfold, two important questions loom: What is the likelihood that these new regulations will actually be put into effect, and how big an impact would they have on the fight to slow climate change? 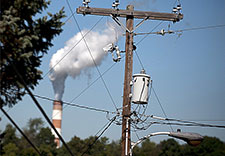 The new EPA rules aim for a 30 percent reduction in CO2 emissions by 2030. JEFF SWENSEN/GETTY IMAGES

Two things could completely derail the rules. First, if a Republican president is elected in 2016, he or she could halt their implementation. Second, the courts could strike them down. The sweeping nature of the regulations announced June 2 by the Environmental Protection Agency (EPA) creates some potential openings for foes. Based on prior decisions it is very unlikely that the courts will entirely reject the idea of using existing law to regulate greenhouse gases, but the particular program announced on June 2 has some vulnerabilities. We may get a better sense of the prospects for a successful legal challenge based on the Supreme Court’s decision — expected any day now — on another greenhouse gas case.

These issues must be weighed against the backdrop of two key facts. First, since the last major amendments to the Clean Air Act in 1990, the environmental statutory structure in the United States has been frozen. For the past quarter-century, Congress has neither adopted nor repealed any major environmental laws or amendments.

The Obama administration has run with its regulatory authority, and with considerable success.

Second, in its landmark 2007 decision in Massachusetts v. EPA, the U.S. Supreme Court declared that the Clean Air Act gives the EPA the power to regulate greenhouse gas emissions. Stymied by Congress, the Obama administration has run with that regulatory authority — with considerable success. In 2009, the EPA issued a formal finding that greenhouse gases endanger public health. The next year, the EPA and the U.S. Department of Transportation began a process that will raise the fuel economy standards for cars and light trucks to 54.5 miles per gallon by 2025. Also in 2010, under a “new source review” program, the EPA required permits for greenhouse gases from new or significantly modified sources of air pollution.

Then, in January, the EPA proposed strict emissions standards for new fossil fuel-fired power plants — standards that coal plants could only meet with carbon capture and storage, a technology still in its nascent commercial stages. But few new coal plants were being built anyway, mostly due to the low price of natural gas.

Finally, two weeks ago the EPA issued its draft guidelines on existing fossil fuel power plants, setting a nationwide goal of a 30 percent reduction in carbon dioxide emissions from those plants by 2030, compared to 2005 levels (which were higher than today’s). Each state has its own emissions reduction target, which it can meet in a wide variety of ways; at least nine states and the District of Columbia already meet their targets.

Now, the real legal and political battles begin. The EPA will issue its final guidelines by June 2015. The states will have until June 2016 to file their plans to meet the guidelines, with possible two-year extensions. The EPA will then decide which of the plans are adequate, which require revision, and which are so off the mark (or missing entirely) that the EPA needs to issue its own.

President Obama will leave office in January 2017, so most of this process is likely to play out under his successor. If that’s a Democrat, the process will probably continue. But a Republican president who adheres to the current party position may well stop the program. If, and only if, the Republicans control the White House, the Senate, and the House, would complete repeal of the EPA’s current authority over greenhouse gases be in the cards; otherwise the statute is likely to remain intact. Opponents of regulation will surely attempt to use the appropriations process and other legislative maneuvers to block the program, but numerous similar attempts since 2010 have failed.

A Republican president who adheres to the current party position may well stop the program.

Litigation about the EPA’s rules is as certain as death and taxes. Industry groups and their law firms are already circulating their arguments. At or near the top of most lists is the contention that the EPA’s authority is strictly limited to controlling the emissions from the power plants themselves. The efficiency of these plants can be improved, but that would only reduce emissions by a few percentage points.

Because only small reductions can be achieved at the plants themselves, the EPA’s proposed guidelines would go “beyond the fenceline.” The EPA regulations call for increasing the use of state-of-the-art, natural gas-fired power plants in place of coal plants; increasing renewable energy sources; avoiding retirement of existing nuclear plants; and supporting energy efficiency. States may also adopt market-based programs or join the existing cap-and-trade programs, such as the northeastern Regional Greenhouse Gas Initiative or California’s AB32 program.

States would have a great deal of flexibility in how to meet the emissions reduction targets. But most states must adopt at least some of these “beyond the fenceline” actions to meet their targets. Opponents contend that this exceeds EPA’s authority, as the proposed regulations would require states to take actions that go well beyond regulating emissions from power plants. This argument is based on a legal theory that has never been tested before, and the outcome — at least at the first stage of the litigation — may be heavily influenced by which three judges happen to be randomly assigned to sit on the panel that hears the case; a broad range of political viewpoints are represented on the U.S. Court of Appeals for the District of Columbia Circuit, which hears such cases.

This question will not be resolved for some time. The legal challenge would not be ripe for filing until the rules become final in June 2015. The cases may well follow the pattern that played out after EPA’s “endangerment” finding, motor vehicles rule, and new source review rules: More than 100 lawsuits were filed, but all were brought together for joint argument in court.

In those cases, 26 months passed between issuance of the first rule and the oral argument, and another four months to decision. Then the U.S. Supreme Court was asked to review it all. It refused to reconsider the endangerment finding, suggesting that new attacks would also fail. The Supreme Court did take up the narrow question of whether greenhouse gases could be regulated under the so-called “prevention of significant deterioration program,” which requires permits for new or modified sources of air pollution. Here, too, the EPA interpreted the Clean Air Act to give itself some flexibility to deal with a problem — climate change — that was not appreciated when the statute was enacted.

The new proposal is a hop in the right direction, but far short of the mighty leaps the world needs.

Oral argument was heard in February, and a decision is expected any day. Meanwhile, the challenged rules all remain in effect.

Thus, barring a political earthquake, the states will be preparing their plans in 2015 and 2016. As the owners of older coal plants consider whether to retire them or upgrade them to meet new and emerging environmental standards, the threat of greenhouse gas regulation will be an overlay of uncertainty and possible large expense, on top of the burdens imposed by other new and proposed environmental regulations and the competition from natural gas. The net result is likely to be an acceleration of the retirement of existing coal-fired power plants.

In late 2015 in Paris, the United Nations will convene an international meeting at which negotiators will again try to develop a successor to the Kyoto Protocol. President Obama hopes he can go there armed with a vigorous program, giving the U.S. some moral authority to call on other major countries to take strong action; his new guidelines for fossil fuels are a centerpiece of that program. Whether this will be enough to persuade other countries is very much an open question, though some early signals from China are positive.

For the past decade, growth in global greenhouse gas emissions has been utterly dominated by China. However, the failure of the United States to control its largest source of greenhouse gas emissions — coal-fired power plants — is a prime excuse used by China and other developing countries for not limiting their own emissions more strictly. They will also continue to point out that the U.S. still has high per-capita emissions, remains the largest historic emitter, is a large importer of carbon-intensive goods made in the developing world, and has become a major producer of fossil fuels.

As for the question of whether the Obama administration’s proposed greenhouse gas regulations will make a significant contribution to slowing global warming, the answer is: It will help, but not nearly enough. An analysis from Climate Action Tracker finds that the new plan is insufficient to meet the U.S. pledge of a 17 percent reduction in all greenhouse gas emissions by 2020, and by 2030 U.S. emissions would still be around 5 percent above 1990 levels — far higher than the levels required for the 2-degree C pathway that is needed to avoid the worst effects of climate change.

In sum, the new proposal is a hop in the right direction, but far short of the mighty leaps the world needs.