Now that the presidential campaign is over and gasoline has — for the time being — fallen well below $3 a gallon, the chants of “Drill, Baby, Drill!” have died down. That is a welcome development, for during the campaign voters were lured by the siren’s song of offshore drilling and its supposed benefits, while hearing virtually nothing about its costs.

But the truth is that the environmental price of offshore drilling could be very high, and in no place more so than the state where I live: Alaska. And those of us who care deeply about Alaska’s offshore waters — encompassing some of the cleanest and most biologically productive seas on earth — are hopeful that the Obama administration and the new Congress will act decisively to reverse many decisions of the Bush White House, which moved recklessly to drill off Alaska’s coast, with little concern for the environment. Today, few Americans are aware that, during the past eight years, the Bush administration has quietly opened a vast swath of offshore Alaska — an area more than twice the size of New York state — to drilling.

While some of the Bush administration’s decisions can be undone with the stroke of Barack Obama’s pen, others cannot. A concerted effort must now be launched — in the Congress, the Interior Department, and in the courts — to rein in the oil and gas leasing, exploration, and development that gathered significant momentum in the U.S. Arctic since 2000. 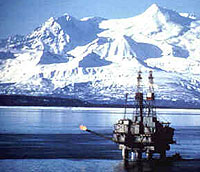 The task is urgent not only because America’s “Polar Bear Seas” — the Beaufort and Chukchi seas — and the salmon-rich waters of Bristol Bay are home to an extraordinarily rich assemblage of fish, seabirds, whales, sea lions, and other marine mammals. That urgency is compounded because global warming is rapidly altering the marine environment. Regions now open to oil drilling are losing their sea ice, which is very bad news for the creatures, such as polar bears and ringed seals, that depend on that ice to survive, though probably good news for those who would turn this pristine environment into the Saudi Arabia of the Far North.

To slow down the offshore oil rush in Alaska, the new Obama administration should take the following steps.

First, as president, Obama should sign an executive order reversing the Bush administration’s decision to drill on 5.6 million acres in Bristol Bay — home to what may be the greatest run of salmon on earth.

Second, President Obama’s Secretary of the Interior must reform the department’s Minerals Management Service (MMS), which oversees oil drilling. During the Bush administration, the MMS — plagued by corruption and sometimes staffed with former oil industry executives — has failed to ensure that proper environmental safeguards are in place before offshore drilling begins.

Third, under leases granted by the Bush administration, MMS has the right to suspend operations for environmental reasons. The Obama administration should invoke those rights until the oil industry demonstrates that it can operate in these extreme environments without risk to wildlife and marine resources. The new administration must prohibit drilling in environmentally sensitive areas, including prime polar bear habitat and whale migration routes.

Finally, working through the Department of the Interior and the Coast Guard, the Obama administration must vastly improve the ability of oil companies to respond to spills of heavy crude oil in Alaskan waters.

The threat of a major oil spill off Alaska’s shores is growing rapidly as oil exploration and extraction expand into the Arctic.

Conservation groups such as World Wildlife Fund (WWF) — where I am managing director of the Kamchatka-Bering Sea Ecoregion Program — are staunchly against drilling in biologically rich environments such as Bristol Bay. We also believe that any new offshore development in the Arctic should only be part of a transitional effort to a new energy policy. Before such drilling is considered, however, scientists must gather baseline biological data and quantify the cumulative impacts on the marine environment.

In recent years, the troubled Minerals Management Service has moved to develop offshore Alaska with an alacrity rarely seen in a federal agency. In the past year alone, the MMS has expanded the territory available for leasing in Alaska’s offshore waters from roughly 10 million acres to more than 80 million. Earlier this year, MMS leased 2.9 million acres of that newly opened territory to oil companies in the remote Chukchi Sea. In addition, another 25 million acres of state and federal lands in the U.S. Arctic — onshore and off — are open to oil and gas leasing; of that,13.5 million acres have already been leased. The only area that now remains totally off-limits to oil drilling is the coastal plain of the Arctic National Wildlife Refuge.

What’s the worry? Comforted by massive oil industry advertising campaigns paid for with record profits, the average American could not be blamed for believing that the oil companies can drill oil on land and sea and transport it without a drop being spilled. Nothing could be farther from the truth. The threat of a major oil spill off Alaska’s shores is growing rapidly as oil exploration and extraction expand into the Arctic.

Those of us who work regularly on these issues are alarmed for two principal reasons. First, state and federal environmental oversight of the oil industry in the Arctic has been abhorrent. And second, engineers and other experts widely agree that the technology to contain oil spills in sea ice environments simply doesn’t exist.

Experts point to a yawning gap in “oil spill response” capacities between Arctic and temperate zones. If oil is spilled in the Arctic, we should expect it to stay

there. We know all too well the impact of spilled oil on bird life and marine mammals, including polar bears: they die. MMS itself has said that the likelihood of a major oil spill in the Chukchi Sea is somewhere between 30 and 50 percent. Yet, most experts contend that it is exceedingly difficult, if not impossible, to use booms and other conventional technology to soak up heavy crude oil in waters covered in icebergs and sea ice.

The Exxon Valdez disaster, the worst oil spill in US history, did catalyze improvements in the industry. But industry problems have persisted in the Arctic, including slipshod maintenance of key parts of the Trans Alaska Pipeline and North Slope oil facilities.

On Prudhoe Bay, a lack of maintenance has caused major oil spills, leading to previous court injunctions against offshore exploration. British Petroleum went years without maintaining one of its North Slope pipelines, resulting in a spill of 200,000 gallons of oil in 2006 and a 3-day shutdown of BP’s operations.

MMS has repeatedly demonstrated its allegiance to the oil industry, and there is a revolving door between the MMS and the industry as they trade senior staff back and forth.

At sea, Shell Oil has aggressively pursued plans to develop offshore oil deposits. But Shell’s exploration activity in the Beaufort Sea was halted when the Ninth Circuit Court of Appeals ruled that seismic testing would harm noise-sensitive bowhead whales and the indigenous communities that harvest them. The village of Point Hope, Alaska, joined by numerous native and environmental groups, is now challenging offshore development on the 2.9 million acres in the Chukchi Sea, contending that MMS violated federal environmental laws when it conducted the lease sales.

A top priority of the Obama administration must be to put an end to a culture at MMS in which science has routinely been quashed and corruption has been rampant. MMS has repeatedly demonstrated its allegiance to the oil industry, and there is a revolving door between the MMS and the industry as they trade senior staff back and forth. A senior MMS official retired from his agency post, only to turn up on the Shell payroll. The Interior Department’s Alaska representative made a similar move to Shell Oil. But this cozy friendship is not unique to Alaska. This fall, the Interior Department’s Inspector General released details of an investigation demonstrating a history of oil companies bribing MMS employees with gifts and sexual favors.

Understandably, consumers throughout the United States are worried about the deepening economic crisis and the high cost of living. But the implication that drilling in the U.S.’s marine environments will do much to help the average American is wrong. In fact, experts of all political persuasions acknowledge that even if offshore drilling were to begin today, a decade would pass before the oil could flow to the gas pumps. And even then, we’d only be paying a few cents less for each gallon of gas.

President-elect Obama must quash the myth of drilling our way to energy independence and develop a comprehensive energy policy that recognizes the benefits of conservation and efficiency and the necessity of moving to a low-carbon economy. In addition to slowing the rush to drill in Alaska waters until comprehensive scientific studies are conducted, the new administration should consider buying back some or all of the $2.6 billion in leases sold last February on the Chukchi Sea. A precedent exists for such action: Following the Exxon Valdez spill, the federal government paid $90 million to re-purchase leases in Bristol Bay.

Let’s hope that as our new president and Congress develop an energy and climate policy, they will reject the vision of Arctic seas bristling with oil derricks and instead pursue a forward-looking plan that will both wean the United States off its addiction to oil and secure a future for the unique ecosystems and people of the Arctic.