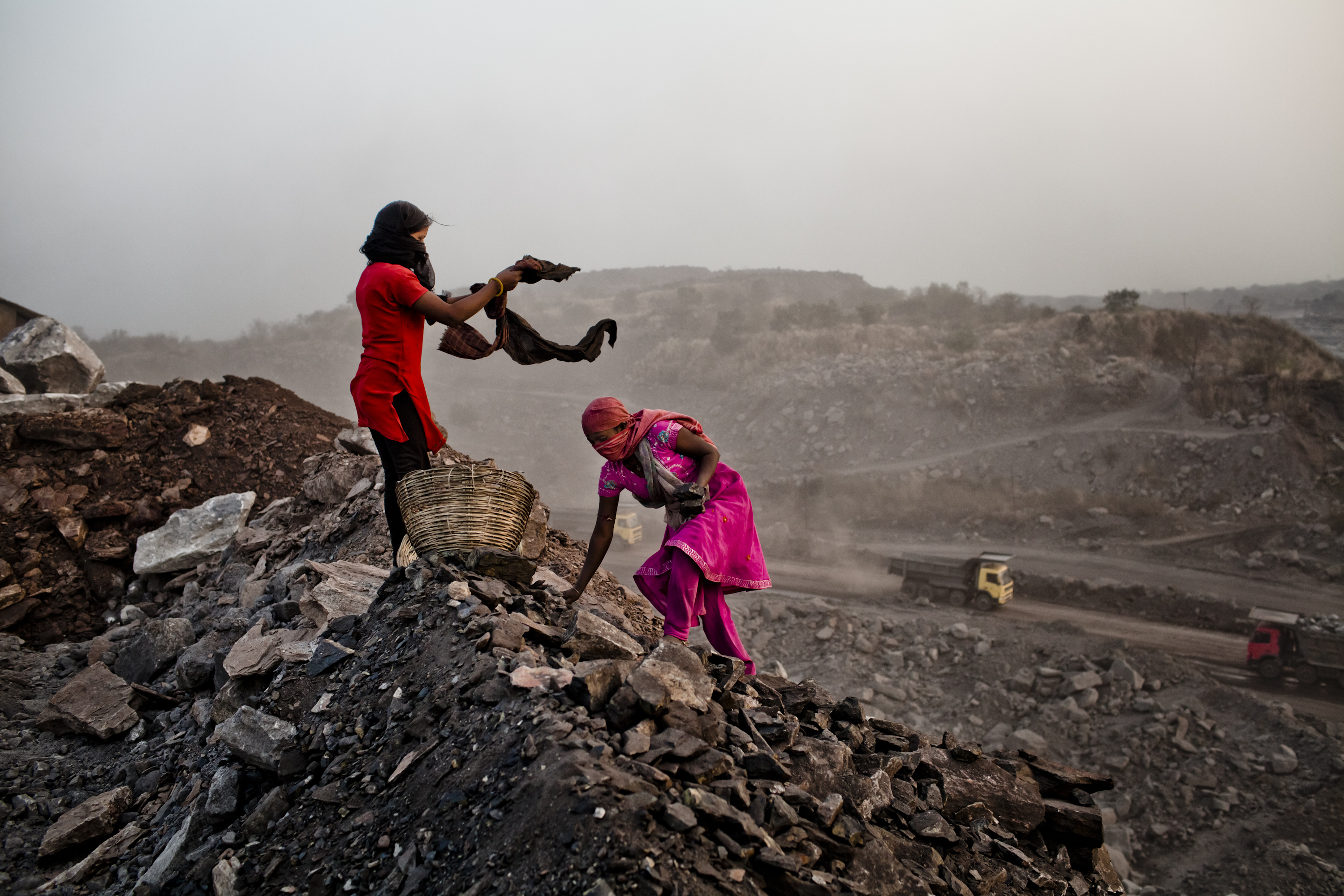 Young women scavenge coal at a dump site of an open-pit mine in the Jharia coalfield. DANIEL BEREHULAK/GETTY IMAGES
“Come,” says Raju. “Let me show you my house.” His clean white shirt, well-brushed hair, and calm demeanor belie the almost apocalyptic landscape in which he and his family lived.

We are standing on the edge of a 650-foot unfenced drop into an open-pit coal mine that is shrouded in dust. As we gingerly approach his home, a two-room brick hut just 30 feet from the precipice, we have to clamber over the rubble of collapsed houses and avoid deep fissures and spots of hot earth from which smoke is erupting. What remains of the once-rural village of Lantenganj — now deep inside India’s largest coalfield in the mining state of Jharkhand — is being consumed by underground fires that burn the coal beneath. The government-owned company Bharat Coking Coal, whose mines are responsible for the fires, wants the villagers to leave — for their own safety, the company says, and so the mine can be expanded.

But Raju’s family and the 50 others that cling on here say they will not go without proper compensation and new homes near to their jobs in these mines. “We’ve got nothing from the government,” Raju tells me, as we inspect a crack that has opened up in his living room floor. “We want a better deal or we will not move.” Until, presumably, their houses fall into the abyss below.

These are economic boom times in India. The government of Prime Minister Narendra Modi is presiding over 7-percent annual growth, fueled by the coal that generates most of the country’s electricity and powers heavy industries like steel and motor manufacturing that dominate Jharkhand, one of India’s industrial heartlands. To keep the growth going, Modi last year called for the state-owned company Coal India, whose subsidiaries include Bharat Coking Coal, to double its production by 2020. 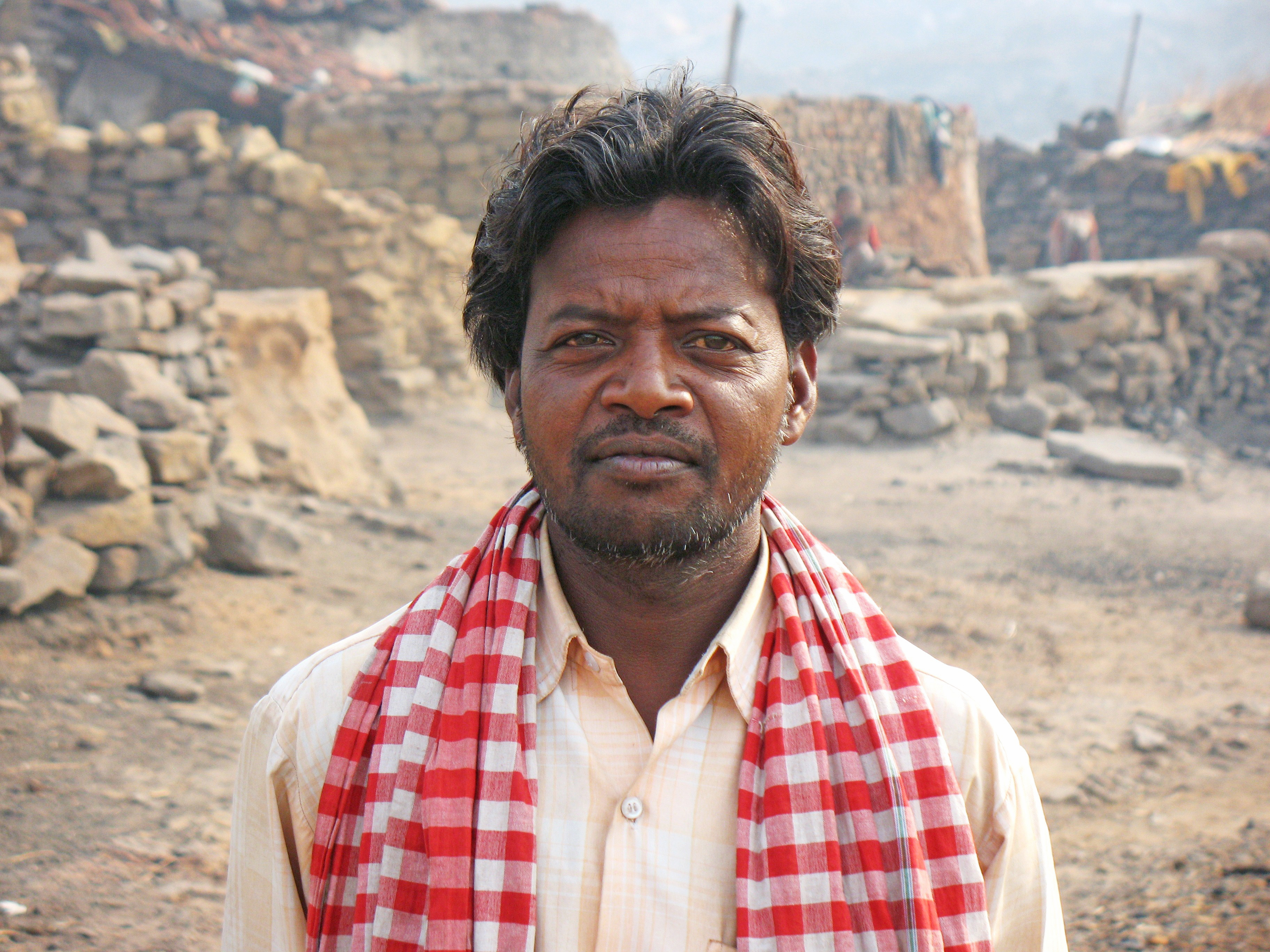 Raju and his family live 30 feet from an open-pit coal mine in Lantenganj. FRED PEARCE
Many fear the climatic consequences of India’s drive for coal-powered growth. Other major coal mining nations like the United States and China are cutting back on burning the dirtiest of the fossil fuels. But India, the world’s third largest coal producer and fourth largest greenhouse-gas emitter, stood out as a climate bad guy at the United Nations’ climate talks in Paris in December. It has set itself on an energy growth path that will increase emissions by an estimated 60 percent by 2030.

That is bad enough. But there is a local price to pay too — in polluted air and damage to the lungs and living conditions of people, like Raju, whose homes are in such mining areas as the 108-square-mile Jharia coalfield that includes Lantenganj. According to Gurdeep Singh, of the Indian School of Mines University in Dhanbad, the biggest nearby city, Jhaira is probably the most densely populated coal-mining area in the world, with up to half a million inhabitants.

The Jharia coalfield is gigantic. Its nine large open pits and dozens of deep mines and smaller pits are responsible for about a quarter of India’s coal production, including almost all of its highly prized bituminous coal, which is burned in the blast furnaces of the country’s major iron and steel corporations, such as Mittal and Tata.

As I experienced during a trip to the Jharia coalfield early this month, nearby communities are frequently shrouded in a noxious fog of smoke and dust that catches in the throat and dramatically reduces visibility. A study last year by the Central Institute of Mining and Fuel Research in Dhanbad found widespread evidence of lung diseases and other health impacts.

The problem is worsened by the fires that lurk underground in about a tenth of the coalfield. Aside from blackening the air, they cause widespread subsidence as they eat away the coal and cause the ground above to fissure and collapse. Over the years, they have consumed an estimated 37 million tons of coal , according to Glenn Stracher of East Georgia State College in Swainsboro, an expert on underground coal fires, who rates the Jharia conflagrations among the worst in the world.

The coal company sees the fires as a means to force out villagers in the way of mine expansion, an activist says.

The fires typically ignite spontaneously when minerals in the exposed coal are oxidized and heat up. Some have been burning since the British began deep mining here over a century ago. But the subterranean conflagrations have dramatically worsened since independent India began open-pit mining in the 1970s.

Official reports mention 70 long-standing major fires. But in the plush air-conditioned local offices of the government-run Mines Rescue Station, the people whose main job is to contain and extinguish fires in productive mines by sealing them off told me that the current tally is 84. They are losing the battle.

This sounds as though it would be bad for business. Indeed, the fires have reportedly cut off some 1.5 billion tons of coal from future mining. But Jharia businessman Ashok Agarwal, who campaigns for the rights of those who are losing their homes to the fires, told me he believes the mining company sees the fires more positively — as a means to force out villagers who get in the way of expanding the mines to increase production. “The fires are being used to secure more and more land,” he said. “As they spread, the people are forced to evacuate.”

The company, which did not respond when contacted by Yale Environment 360, reportedly denies this motive. But the Jharia coalfield has a tradition of brutality. It and the neighboring steel city of Dhanbad are notorious in India for being the home of coal mafias. These are criminal gangs that reputedly control trade unions, money lending, a huge clandestine trade in coal — and politics. In 2012, Bollywood made a movie based on the local mafiosi, called Gangs of Wasseypur . 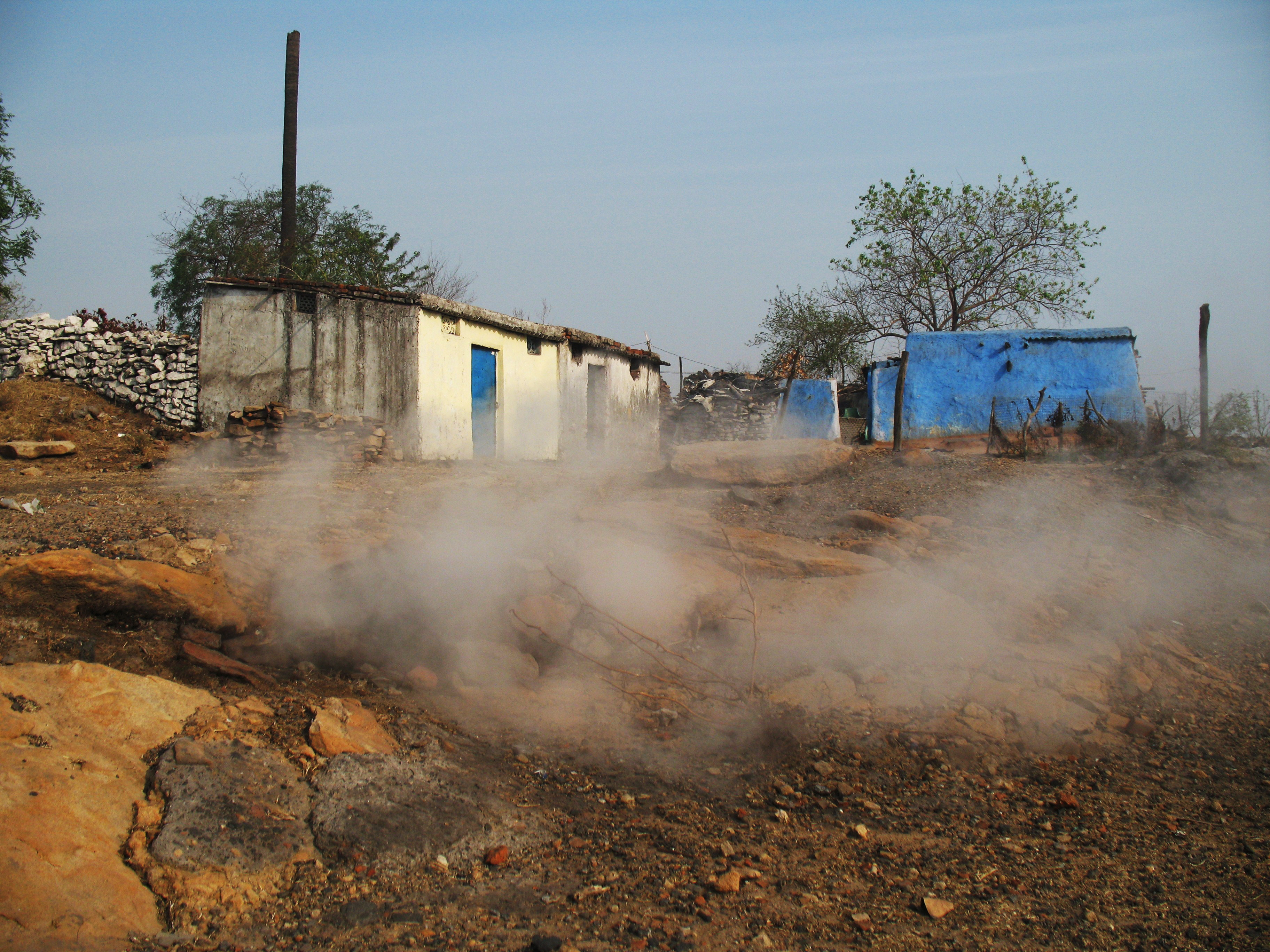 Jharia’s underground coal deposits have been burning for nearly a century. FRED PEARCE


An hour’s rickshaw ride away from Jharia, serried ranks of four-story apartment blocks make up Belgaria, a township under construction by the government’s Jharia Rehabilitation and Development Authority since 2006 to house evacuees from the advancing mines and fires. It currently has 2,300 households, each family having been given a free one- or two-room apartment for life. But it could grow to many times that size if the government’s aim to shift 100,000 people from the coalfield is ever carried out.

The township has a bank and a school, and much cleaner air than on the coalfield — but no jobs. Evacuees have to commute back to the coalfields to find even casual labor. Yet many — like Pandey, who came from the mining village of Bokapahari five years ago — have more or less given up trying to find work. “There are no jobs now,” he said.

Life in the township remains surprisingly rural, with chickens and cattle roaming the streets. In his tiny apartment, Pandey’s daughter was cooking a lunch of leafy green vegetables and rice; I noticed her stove burned dried cattle dung, rather than coal.

An hour later, I was in Pandey’s former home village of Bokapahari, its remaining houses sandwiched between an abandoned mine and one still growing. As I watched smoke billow from a subterranean fire just meters from his home, Mohammed Ansari told me that his family would be happy to move. “But the people in charge of the relocations want bribes, and we won’t pay,” he said, with a dismissive snarl.

The slow progress in moving people away from the hazardous and unhealthy coalfield suggest that government in Jharkhand is characterised less by ruthlessness than by inefficiency and corruption. The state has been condemned by Human Rights Watch as one of India’s most corrupt.

Beyond Jharia, the state is peppered with coal mines: giant open pits descending for hundreds of meters, a few old underground shafts, and many drift mines, which are reached down steep slopes from the surface. Close to the village of Kujju, north of the state capital of Ranchi, I met Bhodo, a member of the Oraon tribal group, whose members originally moved there to work on tea estates, but now labor in the mines.

After washing off the grime from his shift at the Kujju mine in a nearby river, Bhodo was walking home along a road made impassable to our car by subsidence from an underground fire in the mine. Though more than 50 years old, he said he continued to work underground operating machinery — a job he inherited from his father.

He went home, put on a shirt, and got in the car, and we headed to the steep sloping entrance of the drift mine. “The mine isn’t safe with the fires,” he said as we drove. “There are 10 kilometers of tunnels in there, and you can easily get lost in them.”

At the mine, the hard-hatted manager, who did not give his name, said the 150 miners, working in three shifts, brought around seven tons of coal to the surface every hour. It was a relatively small enterprise of Central Coalfields, another subsidiary of Coal India. Even so, I was shocked to see two children playing unattended amid the heavy machinery. Nobody seemed concerned.

India may fancy itself as the new China, driving toward becoming a 21st-century nation. But in a journey of several days across the coalfields of Jharkhand, it more resembled an industrialized caricature of the old India. 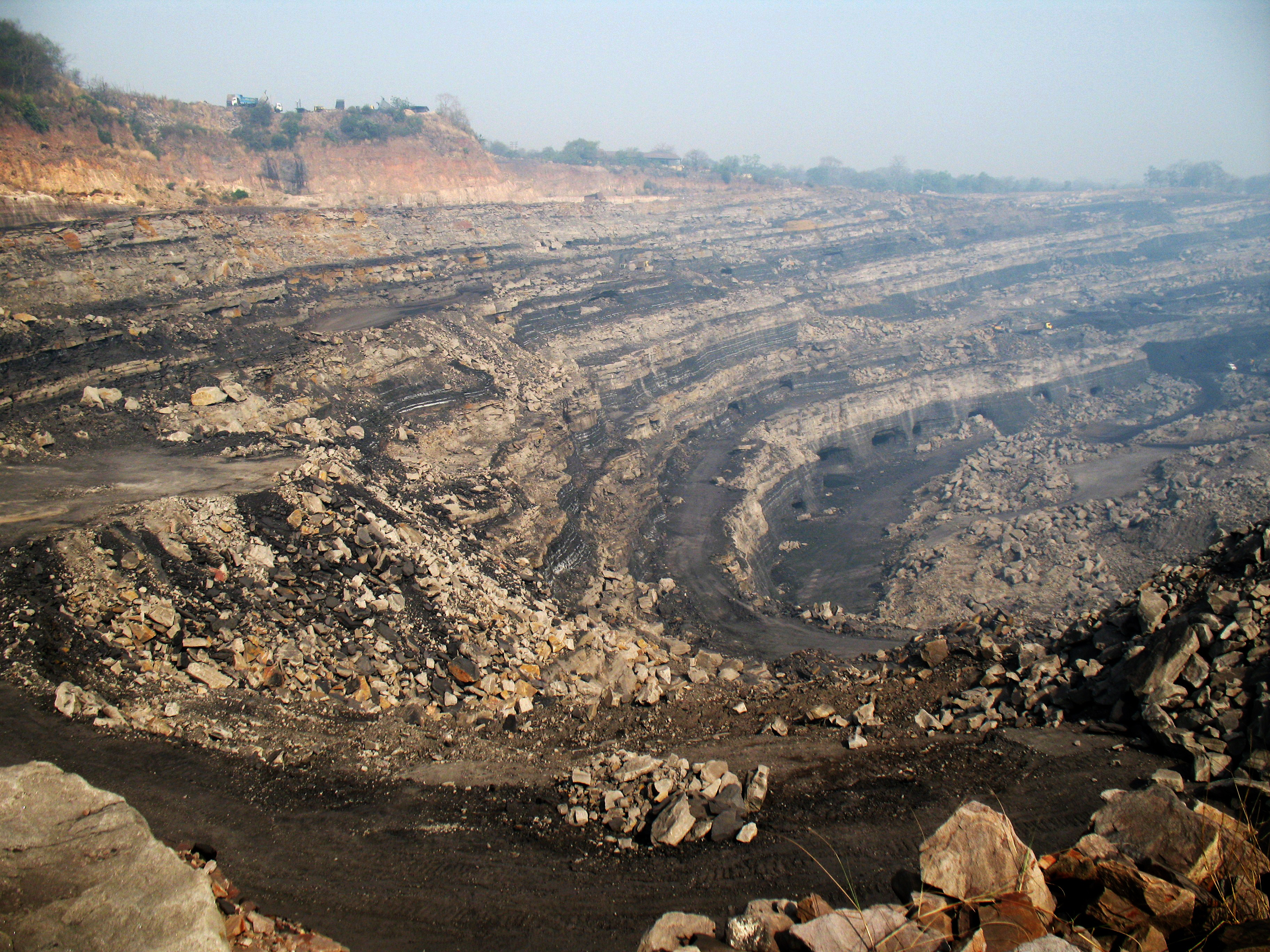 India’s state-owned coal company is ramping up production at the nation’s coal mines, such as this open-pit mine in Jharia. FRED PEARCE


Most astonishingly at odds with the new image were the coal cycle-wallahs. I first came across them on the road north out of Ranchi, pushing specially strengthened bicycles loaded with bags of coal. There were dozens of them — some on their own, and some in groups. Each bike carried about a quarter-ton of coal. Uphill was very hard work, though freewheeling downhill looked fun if you could steer the load.

One group of cycle-wallahs, resting halfway up a steep incline, told me they were taking coal more than 40 miles from mines at Urimari to Ranchi, a journey that took two days. Each load cost them around 600 rupees, or $9, to purchase at the mine and would be sold on arrival to brokers for 1,500 rupees, making a profit on the journey of a paltry $13.

Kuntala Lahiri-Dutt, of the Australian National University in Canberra, who has analyzed Jharkhand’s cycle-wallahs, estimates that most of them are members of tribal minorities and that they transport more than 3 million tons of coal each year. Far from diminishing, the volumes they carry may have doubled since Lahiri-Dutt first started investigating a decade ago, and she says more children are now involved in what are often family businesses.

Cycle-wallahs handle only an estimated 1 or 2 percent of all the traded coal. But their continued role in an industry said to be central to India’s economic progress seems to encapsulate both the sheer human endeavour and resourcefulness of those at the bottom of India’s society and the dysfunctional nature of an economy that would rely on them.

Jharkhand today graphically illustrates the huge disparity between Modi’s growth agenda for India, and the stark reality of the social and environment conditions across this country of more than a billion people. If the prime minister’s modernization project — and the role of coal in it — moves forward, India would seem set to create a mounting tide of victims — from the cycle-wallahs and the refugees of Jharia’s coal fires, to the country’s air quality, to the planet’s climate.