In the early 20th century, fishers on the Yangtze River regularly snared what may have been the biggest freshwater creature of modern times: the Chinese paddlefish. The behemoth once reached 23 feet in length, a third of that being a paddle-like snout that it used presumably to stir up the river bottom to flush out food. A single paddlefish could feed a village and was especially prized for its caviar. But decades of industrialization in China’s heartland have sounded a death knell for the king of the Yangtze. The last time one was caught was in 2003, and it hasn’t been seen since.

The paddlefish is not the only Yangtze creature to have become the stuff of legend. The last confirmed sighting of the Yangtze river dolphin, or baiji, was in September 2004. The Yangtze giant soft shell turtle, perhaps the largest freshwater turtle on Earth, is apparently extinct in the wild. The last two known individuals, a male and a female, have been united in a Suzhou 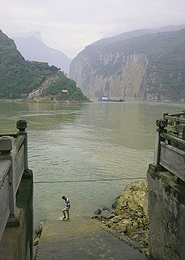 zoo but may be too old or too frail to mate. The Chinese alligator and the Chinese giant salamander are both critically endangered. The Chinese puffer fish and the Yangtze sturgeon are rarely spied these days. The Chinese sturgeon is on life support thanks only to hatcheries that release tens of thousands of fingerlings into the Yangtze each year.

Overfishing, pollution, and habitat fragmentation from dams — including the massive Three Gorges Dam — have brought the Yangtze to its current state. With more dams planned
and Chinese officials intoxicated with unbridled economic growth, the future looks just as grim for the Yangtze’s vanishing species. Much of the river basin “will soon be a mere semblance of its natural state, offering few prospects for persistence of what remains of the river’s unique biodiversity,” says David Dudgeon, an aquatic ecologist at the University of Hong Kong.

All is not yet lost, however. Seasonal fishing bans have given some species a breather. “We can save the remaining ecology of the Yangtze,” argues Xie Songguang, an ecologist at the Institute of Hydrobiology in Wuhan. The potential savior that he and others are counting on is a 10-year fishing moratorium. Such a ban may seem drastic, but it would have a tiny effect on fish markets, as the Yangtze supplies less than 1 percent of China’s freshwater fish production, including aquaculture. A ban is feasible — if the political willpower can be summoned to implement it. With the Yangtze’s ecological health in obvious decline and the economic toll of a ban manageable, the prospects for a moratorium are looking better and better, experts say.

The Yangtze has 378 fish species, including 162 that are unique, or endemic, to the river.

The Yangtze, the world’s third-longest river, flows 3,900 miles from its origins on the Tibetan Plateau to Shanghai, situated at the mouth of the Yangtze on the East China Sea. Around 40 percent of China’s 1.3 billion people live in the Yangtze basin, and the region accounts for one-third of the country’s GDP. “The Yangtze is so important for China’s economic development,” says Wang Ding, a specialist on cetaceans at the Institute of Hydrology. “That makes it very difficult to protect river life.”

Indeed, cities on the Yangtze, including Chongqing, a megalopolis of 32 million people, have long treated the river as an open sewer. More than 25 billion tons of wastewater — half of China’s total — is discharged into the Yangtze each year, says Dudgeon. Fertilizer and pesticide runoff from farm fields and contaminants from ships add to the pollution.

When Wang came to the Institute of Hydrology as a young researcher in 1982, he says, “Nobody was talking about conservation.” By the end of the decade, however, the institute realized that the baiji was imperiled and scientists began searching for ways to protect the river’s ecology. According to the latest tally, the Yangtze has 378 fish species, including 162 that are unique, or endemic, to the river.

The river may have lost its baiji, but it still has Yangtze finless porpoises, the only freshwater porpoise population. To cetaceans, a big threat is ship traffic. The 770 or so miles of the Yangtze that are navigable are a highway of cargo vessels and barges. During the baiji survey in 2006, the research vessel had to crawl up the river: 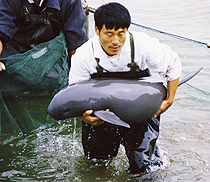 China Photos/Getty Images
A worker carries a Yangtze River finless porpoise, a species that Chinese officials say could be extinct within 15 years.

“There were so many ships in front of us,” Wang says. “There was no space for us, so there must be no space for animals as well.”

Like the lost baiji, finless porpoises must surface for air. They are also bothered by engine noise, which can drown out the sonar clicks the animals use to locate prey and communicate. Fish, meanwhile, fall victim to “highway maintenance”: Dredging for easier navigation destroys spawning grounds.

Another threat to wildlife is the vast engineering works that have transformed the Yangtze basin. The river is connected to a dense network of tributaries, lakes, and wetlands, some of which have been severed by dams and levees from the Yangtze to protect communities from flooding when river levels rise during the summer monsoon season. “The Yangtze is a complex ecological system,” says Wang. “Animals once could move freely through it. That’s not the case anymore.”

The Three Gorges Dam has had a devastating effect on some fish populations.

Hydropower projects have created even more daunting barriers. The Gezhouba Dam, completed in 1981, took a heavy toll on Yangtze fish: It blocked breeding migrations, fragmented populations, and degraded spawning sites of paddlefish and sturgeon, Dudgeon reported in the April issue of the journal Aquatic Conservation. The Three Gorges Dam, finished in 2003, is an even more effective barrier to migration, he says, and has had a devastating effect on some fish populations.

With the ecosystem under assault, Yangtze fish are more vulnerable than ever to their main nemesis: fishers. Up until 1980 or so, Yangtze fishers used small boats and nets, so the pressure on fish was not so heavy, says Xie. Then the industry became more mechanized — trawlers got bigger, nets more sophisticated — and fish stocks were hammered. To compensate, hatcheries have been replenishing stocks of carp and other key species. And since 2000, provinces along the Yangtze have instituted a three-month fishing ban covering the spawning season. Registered fishermen receive subsidies, including rice. The government is expected to extend the ban to four months starting next year.

But that strategy may be doomed to fail. In the summer of 2007, Xie’s team found that fishers in Dongting Lake — one of two large lakes on the Yangtze floodplain connected to the river — were hauling in an estimated 6.6 million juvenile carp a day. “Compared to this huge harvest, hatchery release of commercial species is small in number and meaningless,” Xie says. The juvenile fish, too small to serve to people, are ground up and used as aquaculture feed.

Targeted fishing bans would help some species. One fish that might be saved this way is Coilia ectenes, a kind of anchovy. The fish’s range on the lower Yangtze has been shrinking, and it spawns a month later than it did a few decades ago. Overfishing reduces the distance the fish swims upriver each spring for spawning. “Loss of migration distance is not restorable,” says Xie. That means genetic diversity will decline, making the anchovy more vulnerable to extinction.

“A moratorium may be the only hope for the Yangtze,” says one Chinese ecologist.

The embattled fish might be saved by its own popularity. In late March and early April, a traditional time to eat the anchovy, prices for larger fish can top $500 per kilogram ($226 per pound). In a study last year, Xie found that large fish make up only 2 percent of the catch but more than half the income for fishers. Most big fish are caught early in the season, so the solution is simple, says Xie: Ban anchovy fishing from April 15, when all that’s left, mostly, are the fry. The agriculture ministry’s Fisheries Bureau agreed to implement the ban this year. It will take a few years to determine whether this approach will preserve what’s left of the anchovy’s truncated migratory range.

Targeted bans offer only limited hope, however. What’s needed is a long timeout. Institute of Hydrology scientists are calling for a 10-year fishing moratorium. That’s doable, says Wang. China’s freshwater fish production is approximately 30 million tons a year, of which the Yangtze catch amounts to a mere 100,000 tons.

Although “fish quality in the Yangtze is the best in the country,” he says, officials should not be deterred from ordering a long-term ban to give fish stocks a chance to recover. All 20,000 or so registered fishers could receive

compensation and be steered into other lines of work, the institute’s scientists say. All told, around 100,000 people — the fishers and their families — depend on the Yangtze for their survival. Some fishers could be dispatched overseas as a kind of aquatic Peace Corps to advise less-developed countries on fisheries management, says former Institute of Hydrology ecologist Chen Peixun, China’s top baiji specialist.

Such a ban would have to be decreed by the Fisheries Bureau. So far, government officials are unmoved, but Wang says there is reason for optimism. “Since the situation of the Yangtze has been getting worse and worse, and the ban will have very little impact on the economy, it will be quite possible to impose a 10-year ban sometime in the next decade,” he says. A moratorium, adds Chen, “may be the only hope for the Yangtze.”

For those creatures that haven’t yet disappeared, that is.