The moderator at a recent climate change conference asked for a show of hands on who thought a major new U.S. global warming bill would pass into law while George W. Bush was still in office. Of about 150 people in the room, only one raised his hand.

“It’s my job,” Mark MacLeod, climate campaign coordinator at the Environmental Defense Fund, called out, as he explained why he was alone in thinking that 2008 was indeed the year for the United States to enact its first-ever mandatory limits on heat-trapping greenhouse gas emissions.

Washington is a city of full of speculation, and no environmental issue has gotten the prognosticators going quite like global warming. Expectations for a major U.S. climate change law have been building ever since Democrats won control of Congress in 2006. And Congress has tried to buckle down and hash through the preliminaries. But it’s a long way from there to a bill-signing ceremony with President Bush holding the pen — a scenario that most Washington observers now consider highly unlikely.

To date, the Senate has been moving the quickest in getting climate legislation to the floor. Debate on a bill sponsored by Sen. Joseph Lieberman, I-Conn., and John Warner, R-Va., was set to begin this week. 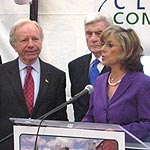 The Lieberman-Warner legislation would establish a mandatory cap-and-trade program requiring power plants, petroleum refiners, and other big smokestack industries to either cut their own emissions or buy and sell credits on a new carbon market from companies that do clean up their act. Emissions from about three-quarters of the U.S. economy would be covered under the bill, which seeks to reduce greenhouse gas levels by about 70 percent from 2005 levels by mid-century.

The Lieberman-Warner bill was cobbled together from about a half-dozen other proposals also introduced in 2007, including a far more aggressive measure written by Sen. Barbara Boxer, D-Calif., and a less stringent plan from Sen. Jeff Bingaman, D-N.M. Headed to the floor, Lieberman and his allies claim they are within reach of the all-important 60-vote threshold needed to beat back a filibuster and pass the legislation. But that’s about as far as they’re willing to go — they’re making no assurances.

In recent months, the bill’s authors have been trying to negotiate on several potential stumbling blocks — each dotted with its own potential land mines. One cluster of undecided senators, for example, wants greater incentives for nuclear power. Another group hopes to make sure any U.S. climate policy comes with a corresponding step from China and India. It’ll require a delicate balancing act to get to 60 votes.

“It’s like a game of legislative Jenga,” industry lobbyist Scott Segal said as the authors of the Lieberman-Warner bill guided it through committee. “Remove one piece and others may fall out of place.”

Boxer, chairwoman of the Senate Environment and Public Works Committee, holds the reins over any legislation that will go to a floor debate. She says she wants to toughen the bill, but that’s not an easy task, given that it would require winning over moderate and conservative Democrats who typically don’t stand for strong environmental legislation. Boxer also must deal with a group of mainly Republican senators, from Oklahoma’s James Inhofe to Georgia’s Johnny Isakson, who plan to offer amendments designed to make the Democrats uncomfortable. Picture floor speeches on how much the legislation will cost someone trying to fill up their gas tank in Kansas City or Phoenix.

With the prospects of a floor fight looming, Boxer has threatened to yank the Lieberman-Warner bill off the agenda and wait until next year if any “weakening amendments” are added. Boxer hasn’t said exactly what a weakening amendment would be. “You’ll know it when you see it,” she told reporters, citing the Supreme Court’s oft-quoted definition of pornography.

Boxer also contends that she will be able to count on more votes in her corner after the 2008 elections. “I’m willing to settle for the necessary, no less,” she said. “So if it isn’t a good bill, it isn’t going to happen. We think, looking ahead, we’re going to have a stronger Senate, a stronger House and a stronger president on this issue. So we have the leverage right now.”

On the other side of the Capitol, the House appears to be frozen in slow motion when it comes to the climate issue. Democratic leaders brought Al Gore in to testify on global warming in the spring of 2007. Then, last winter, they helped guide into law the first new automobile efficiency standards in more than 30 years, as well as a suite of new home appliance requirements. But progress has stalled on any cap-and-trade legislation.

House Speaker Nancy Pelosi, D-Calif., champions tough emission limits. She’s been saying for more than a year that she wants to see cap-and-trade legislation move through Congress. But even Pelosi’s tone has grown increasingly less optimistic. A recent press statement ended with the promise to move a climate bill this year, but with this addendum: “That is my hope.”

Pelosi needs to tread carefully. Her Democratic majority includes moderates and conservatives from districts with large labor union constituencies and big carbon-intensive industries. Her vision of a global warming bill poses a potentially major political problem for them.

Enter the chairman of the House Energy and Commerce Committee, Rep. John Dingell. A Michigan Democrat, Dingell is well known for looking out first and foremost for his home state’s auto interests. In 2006, he picked a fight with Pelosi when he proposed blocking California’s bid to regulate for global warming emissions from cars, arguing that it would be too difficult for U.S. automakers to deal with multiple standards.

Dingell presides over a 57-member committee that includes Democrats and Republicans who tend to be skeptical of any stringent new environmental requirements. The bill his Energy and Commerce Committee ultimately writes, if it even gets that far, almost assuredly won’t be the kind of bill Pelosi wants. But it may very well be the only one that can pass.

Stepping back and looking at both sides of Capitol Hill, the political realities strongly suggest nothing will happen this year on climate-change legislation. Yet some of the country’s largest trade associations and companies have started to make noise that they would prefer to find a compromise while Bush is still in office. Clearly, they are fearful of the next president’s climate policies, given where Senators John McCain, Barack Obama, and Hillary Clinton stand in support of cap-and-trade legislation. And they are worried about the prospect of federal agencies writing their own climate rules thanks to a landmark Supreme Court decision in March 2007 that gave the EPA the green light to regulate carbon dioxide as a pollutant under the Clean Air Act.

“Our industry is as motivated as any industry to move reasonable climate legislation forward in the days that remain in this Congress,” Kraig Naasz, president of the National Mining Association, said in a recent interview.

Perhaps industry will get its way, and the optimism of EDF’s MacLeod will be proven right. After all, stranger things have happened — major pieces of environmental legislation adopted during presidential election years include the 1972 Clean Water Act, 1992 Energy Policy Act, and the 2000 Everglades Restoration Act.

But most cooler heads see time ticking away on this year’s legislative calendar. If anything, 2008 sounds as if it will be the dress rehearsal for the next Congress and the next president.

“Whatever comes to the [Senate] floor will merely be for the purpose of fostering debate, not for passage,” predicted Sen. Isakson, R-Ga., who opposes the Lieberman-Warner bill because of its potential economic costs and also because he wants it to do more to promote expansion of nuclear power. “The next president is going to be the one to deal with it.”