For more than 25 million years, Lake Baikal has cut an immense arc from southern Siberia to the Mongolian border. The length of Florida and nearly the depth of the Grand Canyon, Baikal is the deepest, largest in volume, and most ancient freshwater lake in the world, holding one-fifth of the planet’s above-ground drinking supply. It’s a Noah’s Ark of biodiversity, home to myriad species found nowhere else on earth. It’s also changing fast, due to heat-trapping greenhouse gases that are increasingly disrupting the climate.

Baikal’s surface waters are warming at an accelerating pace, rising at least 2 degrees Celsius (3.6 Fahrenheit) over the past quarter century — twice as fast as global air temperatures, new research shows. The ice season, which typically covered the lake from January through May, has been shortened by nearly three weeks since the mid-1800s, and the ice has thinned nearly 5 inches since 1949. By the end of the century, scientists say that Baikal could be ice-free a month or more longer than today.

This rapidly changing climate threatens the lake’s unique, cold-adapted creatures, including the iconic nerpa — the world’s only true freshwater seal — whose fertility drops in warmer winters. Fishermen complain that the omul — a once-bountiful species of whitefish — has already grown scarce. Rising temperatures may also factor into some mysterious new problems plaguing the lake in the past few years. The brilliant green underwater forests of endemic Baikal sponges are dying, victims of an unknown pathogen. And dense algal mats choke wide swaths of bottom near shore.

“These mats smother everything underneath them, and of course that’s where the greatest biodiversity is in this lake,” said Wellesley College aquatic ecologist Marianne Moore. “It’s a real problem.”

Baikal is just one of many large lakes worldwide showing signs of rapid change as a result of rising temperatures. Majestic water bodies like Baikal and North America’s Lake Superior are integral to regions such as Siberia and the Great Lakes, playing a key role in transport, fisheries, and tourism. They also store the bulk of our planet’s liquid freshwater. But the lake-rich northern latitudes, where the majority of these vital resources lie, are the fastest-warming regions on earth.

Until recently, scientists had scant knowledge of how warming and weather extremes were affecting lakes.

More than three in four large lakes above the 40th parallel north, roughly the latitude of New York City and Madrid, have undergone summer surface temperature increases of 2.7 F or higher from 1985 to 2009, a new international research collaboration finds. Some lake temperatures rose more than twice that amount. Nearly all have experienced retreating winter ice, a loss that can interfere with internal circulation, reduce oxygen, and help create fertile breeding grounds for harmful algae. These changes, which appear to be accelerating, have potentially profound consequences for water supply, food, and aquatic life.

“Lakes are very clearly telling us that there’s rapid warming worldwide,” said Stephanie Hampton, an aquatic ecologist at Washington State University in Pullman and a member of the Global Lake Temperature Collaboration, a grassroots scientific effort that’s compiling an international database of lake observations. “Whatever is happening to them is not only a sentinel for larger environmental change,” said Hampton, “but it also directly makes a difference to us.” 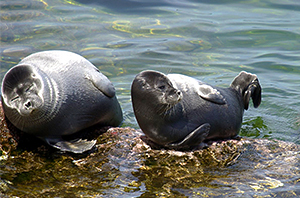 Baikal seals, the world’s only true freshwater seal, give birth in ice caves that could disappear as waters warm. SERGEY GABDURAKHMANOV

Until recently, scientists had scant knowledge of how atmospheric heating and increasing weather extremes were affecting lakes throughout the world. Limnology — the study of inland bodies of water — typically centered on a specific lake, with little information exchange across regions. But the far-flung global lake collaboration — which is compiling data ranging from Alpine lake temperature observations by an Austrian naturalist in the mid-1800s, to century-old Baikal ice measurements that survived wars and revolutions, to the latest satellite imaging and probes — is beginning to reveal the planetary toll.

Launched in 2010 by a group of 10 scientists from three countries, the global lake collaboration began as a “conversation with various people about what was causing this rapid warming in big lakes,” said John Lenters, a climate scientist with the Ann Arbor, Michigan environmental consulting firm LimnoTech and one of the group’s founders. The initiative has now expanded to include more than 70 researchers contributing data from nearly 300 lakes in 60 nations to find the patterns and geographic clusters of lakes warming most rapidly.

“Only by comparing lakes and systems in different parts of the world can you really start to tease apart what’s happening,” said Geoffrey Schladow who, as director of the University of California Davis Tahoe Environmental Research Center, studies Lake Tahoe on the border of California and Nevada. “No one lake is going to tell it all to you.”

Much of the work is still in progress. The responses of lakes to climate change are shaped by a variety of factors, such as surface area and depth, and no two lakes are identical. But analyses show northern hemispheric lakes are warming most rapidly, and that shrinking ice cover is largely to blame.

“One of the trends has been that ice-out [spring thaw] is occurring earlier on these lakes, and one of the consequences of that is the lake has more time to absorb the sun’s energy and reach higher water temperatures in the summer,” said Catherine O’Reilly, an aquatic ecologist at Illinois State University in Normal. “Basically summer is longer from the lake’s perspective.”

Summer water temperatures in Lake Superior have soared by 6.3 F since 1906.

Among the fastest-changing is Lake Superior, the coldest and northernmost of the Great Lakes. As large as Austria, Superior plunges 1,330 feet deep and is the world’s third-largest lake by volume, holding 11 percent of the planet’s surface water supply. Summer water temperatures have soared by 6.3 F since 1906, when a hydropower plant at the lake’s outlet began taking daily measurements. Most of the heat gain has come in the past 30 years, during which “there’s been a significant trend toward lower ice,” said Jay Austin, a physical oceanographer at the University of Minnesota Duluth’s Large Lakes Observatory. Between 1973 and 2010, Lake Superior’s ice cover shrank by nearly 80 percent.

Year-to-year variations can mask long-term effects. For instance, the nearly ice-free winter of 2012 was followed by exceedingly cold winters in 2014 and 2015, with extensive, thick ice. But low-ice winters are increasingly common these days, Austin said. The phenomenon stresses fish, evaporates lake water, and affects activities ranging from recreation to commercial shipping.

Europe’s large lakes also show climbing temperatures and waning ice. For example, in the continent’s fourth-largest freshwater body, Lake Peipsi in Estonia, the December-to-April ice cover is breaking up nearly three weeks earlier than a century ago, said Peeter Noges, a limnologist at the Estonian University of Life Sciences in Rannu. Winter air temperatures around this pine-ringed Baltic lake have climbed by 5.4 F in the past 50 years. Temperatures still average a chilly 28 F, but if that rises to 32 F — in line with current global warming trends — Peipsi’s ice season would be cut in half, Noges and colleagues calculate. Further temperature increases could render the lake ice-free year-round, much to the dismay of the thousands of ice fishermen who visit every weekend during the long, dark winters.

Peipsi’s warming waters are already spurring major fish kills and species shifts in a region where fishing plays a large role in the economy and lifestyle. Cold-water-loving smelt, once abundant, have given way to pike-perch. Several species of juvenile fish are in decline. “The most remarkable is the disappearance of vendace [also called European cisco],” said Noges, “for which the lake was famous.”

As Lake Baikal shows, an abbreviated ice season can knock an entire ecosystem off-kilter. The rift lake is known for its ample, astonishingly clear ice, essential to both ends of the lake’s food web. The top predator, the Baikal seal, gives birth in protected ice caves on the lake, where pups live until they can swim. Retreating ice could leave tiny pups exposed to marauding crows. At the base of the food chain, the yearly peaks of the large, nutritious diatoms, which bloom beneath the ice, are coming more than a month later as warming winters push back freeze-up. Now, some smaller and less-nutritious zooplankton appear to be muscling in.

Like the oceans, major bodies of freshwater may be growing more acidic from escalating greenhouse emissions.

Warmer winters also tamp down summer circulation in northern lakes. When surface temperatures are near freezing, the cold, dense top layer sinks, mixing oxygen down and nutrients up, an annual event called “turnover.” As the lake surface heats, it “stratifies” into distinct layers that keep oxygen from mixing into the cooler water below, essentially suffocating the depths. The earlier that warming begins, the longer the stratified period, and the larger the hypoxic, or oxygen-depleted, zone where few creatures can live.

In Lake Tahoe, among the world’s deepest, summer stratification has expanded by three weeks since 1968. This spring the lake failed to mix completely for the fourth year in a row, water temperature and density measurements show. The previous winter, lake temperatures were the highest, and the number of freezing days the lowest, ever recorded. Climate modeling by Schladow and colleagues suggests that as the lake continues to warm, its deep mixing could eventually shut down, perhaps by the 2060s.

Increasing lake stratification also bolsters blooms of cyanobacteria, harmful algae producing toxins that can sicken or kill people and animals. Cyanobacteria thrive in low-oxygen, high-nutrient conditions like those in Lake Erie, the southernmost of the Great Lakes, which has begun having annual blooms so large they’re visible from space. Such events will become more frequent and widespread as the planet warms.

“When you have these harmful algae, it becomes a human health issue,” said Benjamin Kraemer, a limnologist at the University of Wisconsin-Madison and lead author of a recent paper on lake stratification and climate change. Beaches must be closed and water intakes shut down during the blooms. “That has a huge impact on the economy and the benefits people get from lakes,” Kraemer said.

Work has already begun on a $50 billion inter-ocean canal in Nicaragua that would cut through nature reserves and bring massive dredging and major ship traffic to Central America’s largest lake. Scientists and conservationists are warning that the project is an environmental disaster in the making.READ MORE

Like the oceans, major bodies of freshwater may also be growing more acidic from escalating greenhouse emissions, new research indicates. “As we drive the carbon dioxide concentration up in the atmosphere, the carbon concentration in the lakes is going to respond by increasing, and that’s going to drive acidification,” said Galen McKinley, an atmospheric and oceanic sciences professor at the University of Wisconsin-Madison. A recent study she co-authored estimates that the Great Lakes could acidify as rapidly as the ocean this century. That likely would damage creatures with shells, like mussels, and possibly harm young fish. And on the flip side, another new study shows that warming waters could trigger cold northern lakes to release more CO2 as global temperatures rise, further boosting greenhouse gas levels.

So gigantic they can generate weather — like lake-effect snow around the Great Lakes, or Baikal’s relatively balmy microclimate in the midst of Siberia — the earth’s large lakes are not easily perturbed. But once a lake has begun to change, the process could take centuries to stop.

“It’s a bit like an oil tanker,” said Schladow. “It’s really hard to turn it around.”