In the summer of 2014, when oil was selling for $114 per barrel, Alberta’s tar sands industry was still confidently standing by earlier predictions that it would nearly triple production by 2035. Companies such as Suncor, Statoil, Syncrude, Royal Dutch Shell, and Imperial Oil Ltd. were investing hundreds of billions of dollars in new projects to mine the thick, highly polluting bitumen.

Eyeing this oil boom, Canadian Prime Minister Stephen Harper said he was certain that the Keystone XL pipeline — “a no-brainer” in his words — would be built, with or without President Barack Obama’s approval. Keystone, which would carry tar sands crude from Alberta to refineries along the Gulf of Mexico, was critical if bitumen from new tar sands projects was going to find a way to market.

What a difference 18 months makes. The price of oil today has plummeted to around $30 a barrel, well below the break-even point for tar sands producers, and the value of the Canadian dollar has fallen sharply. President Obama killed the Keystone XL project in November, and staunch opposition has so far halted efforts to build pipelines that would carry tar sands crude to Canada’s Pacific and Atlantic coasts.

The industry is suddenly weathering a perfect storm that analysts say has significantly altered its prospects.

Equally as ominous for the tar sands industry are political developments in Alberta and Canada. In May, Alberta voters ousted the conservative premier and elected a left-of-center government. The new premier, Rachel Notley, is committed to doing something meaningful about climate change and reviewing oil and gas royalty payments to the province, which are among the lowest in the world.

In October, Canadian voters tossed out Harper and his Conservative Party government and elected liberal Justin Trudeau as prime minister. Last month, Trudeau vowed not to be a “pipeline cheerleader” and said he would take greenhouse gas emissions into account when evaluating oil pipeline projects. Trudeau signaled that a new era had arrived when he told The World Economic Forum in Davos, Switzerland, “My predecessor wanted you to know Canada for its resources. I want you to know Canadians for our resourcefulness.” 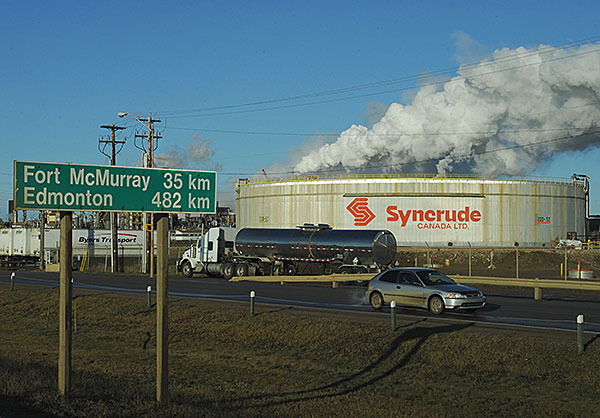 While it may not be time to raise the white flag of surrender in Fort McMurray, the tar sands capital in northern Alberta, the industry is suddenly weathering a perfect storm that analysts say has significantly altered its prospects. Mark Jaccard, a professor of sustainable energy at Simon Fraser University in Vancouver who has served as CEO of the British Columbia Utilities Commission, is not alone in suggesting that because of concerns about climate change and low oil prices, the era of tar sands megaprojects may be at an end.

Peter Tertzakian, chief energy economist and managing director at ARC Financial Corp., agrees, saying that the oil sands industry needs to get smaller, cleaner, and more efficient if it is to be a significant player in the future.

“Even before the price crash there was a trend in oil and gas investing — whether it was by large corporations or individual investors — away from long-payback projects with lots of above-ground risk that were also characterized by very high capital costs,” Tertzakian told Alberta Oil Magazine in September. “The oil sands has to compete for capital with all the other types of oil projects that are out there… The old paradigm of 4,000-man camps and long construction periods is over.”

‘Within the realm of sanity, I think the oil sands are finished,’ says one critic.

Other energy and environmental experts take an even dimmer view, saying that given the steady expansion of renewable energy and more concerted international action to slow global warming, the carbon-intensive tar sands may well shrink and disappear in the coming decades.

“Within the realm of sanity, I think the oil sands are finished,” says David Schindler, who, as a limnologist and ecologist at the University of Alberta played a key role in forcing the tar sands to change the way it monitors and reports air and water pollution. “With their product now so cheap, they are operating well below cost, only desperately trying to recoup some of the huge startup investment rather than see it all lost.” He predicted that the industry will undergo major consolidation until only one or two deep-pocketed giants remain. But, he added, “Eventually they too will fall. New investment? Not unless investors are total idiots.” 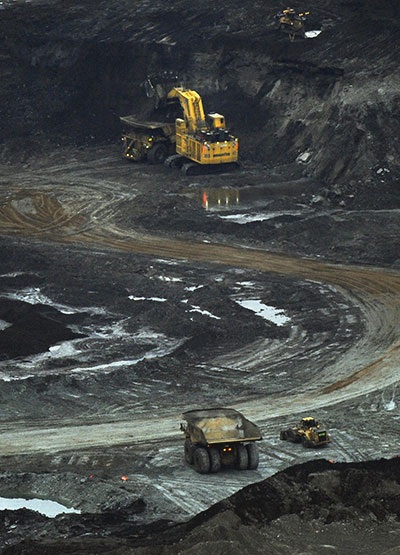 A tar sands excavation pit at a mine operated by Calgary-based Suncor. MARK RALSTON/AFP/GETTY IMAGES

Schindler and other scientists and conservationists have called attention to the large-scale environmental destruction that has accompanied tar sands mining, which involves excavating pits as deep as 250 feet to extract the oil-rich sands. Over the past four decades, tar sands operations have destroyed roughly 300 square miles of boreal forest and wetland habitat. Large amounts of water are used in the mining process, and the industry has created 70 square miles of toxic tailings ponds that have yet to be cleaned up. The mining and refining of tar sands crude also creates significantly more greenhouse gas emissions — estimates range as high as 37 percent more — than producing conventional crude oil.

Many companies have already conceded that they do not have a future in an economic and regulatory regime that rewards lower costs and lower emissions and penalizes big polluters. According to Wood Mackenzie, an energy consulting company, 800,000 barrels a day of oil sands projects have been delayed or canceled over the past 18 months. That amounts to 16 new projects that have been put on hold or canceled. CNOOC, which recently suspended production at its Long Lake tar sands facility, is reportedly one of a number of other companies looking for ways of bailing out of the tar sands.

One wild card is the generous government subsidies that are needed to keep the tar sand industry afloat.

If that’s the case, only the biggest and richest companies will have enough revenue in reserve to weather this current storm. That may be why Canadian Oil Sands Ltd. recently agreed to a takeover by Suncor, and why other companies are likely to consolidate.

Another existential problem for the tar sands industry is that pipeline projects such as Keystone and Northern Gateway — which would transport tar sands oil to Pacific Ocean ports — are dead or on death row. Other pipeline projects such as Trans Mountain and Energy East are encountering strong opposition from Canadian aboriginal leaders, provincial premiers, and municipal officials, including 82 mayors from Quebec, who in January voiced their opposition to the Energy East Pipeline, which would transport tar sands crude to ports in Atlantic Canada.

Jaccard and some other analysts aren’t about to count out the tar sands just yet. He says that conflict in Saudi Arabia or the Middle East could slash production and boost oil prices. A faltering of long-term efforts to slow climate change could also bode well for the tar sands, says Jaccard. He also believes that some of the bigger tar sands companies are rich and innovative enough to surmount the technological challenges they face in dealing with carbon emissions and other climate change challenges, such as the predicted shortage of the massive amounts of river water required to separate oil from the tar sands.

‘The interesting question is how do oil sands and pipeline companies evolve?’ asks one expert.

One wild card in all this is the generous government subsidies and rock-bottom royalties needed to keep the tar sands industry afloat. These subsidies may well decline or disappear as the Alberta and Canadian governments shift their priorities and increase support to wind, solar, and natural gas — not only to meet their CO2 emissions-reduction targets, but also to stimulate the economy.

According to a 2014 report conducted by Clean Energy Canada, renewable energy growth in Canada has produced more jobs than the oil sands industry. Direct employment in the clean energy sector — which includes hydropower, as well as wind, solar and biomass — was 23,700, compared with 22,000 people employed in the tar sands, according to the report.

“The interesting question then is how do oil sands and pipeline companies evolve?” says Dan Woynillowicz, policy director for Clean Energy Canada. “Some have become players in renewable energy, and while it’s a small part of their current business, they are actually some of the largest renewable energy developers in Canada. What does it look like for these companies to keep transitioning from a fossil fuel company, to an energy company with fossil and renewable assets, to a renewable energy company?”

Even if and when oil prices bounce back, the tar sands industry will continue to see steady competition not only from renewable energy projects, but also from the boom in oil produced by hydrofracturing shale formations in the United States.

Schindler, the limnologist who has been a longtime industry critic, may well be wrong in predicting that Fort McMurray “will be the next Butte, Montana, with lots of boarded-up houses, and that taxpayers will be left with lots of toxic tailings ponds and desolate unreclaimable mined lands on their hands.” But he’s not wrong in pointing out that Albertans are genuinely frightened about the future of their once-indomitable energy industry.

Simon Dyer, the associate regional director for Alberta at the Pembina Institute, which acts as an energy industry watchdog, says the Alberta government’s recent plan to cap tar sands carbon emissions at 100 megatons by 2030, from 70 megatons today, is a clear sign that a robust expansion of production is not in the cards.

“It’s not clear that Albertans and Canadians know that the kind of expansion we were promised several years ago will not come to pass,” he says. “That’s not going to happen.”