“Your jaw’s gonna fricking drop,” the guy fishing next to me said, “when after, like, three minutes, you still haven’t hit bottom.” These words were spoken to me last September as I dropped a three-pound weight and two globs of clam bait over the side of the party fishing boat Viking Star into an abyss few people know exist — an abyss that is re-emerging as a battleground in the fight for the world’s dwindling natural resources.

I was fishing 150 miles off Long Island in a bioregion commonly referred to as “the Canyons” — a latticework of 70-odd, 1,000-15,000-foot deep trenches that filigree the periphery of the continental shelf from North Carolina to Maine. Some of the canyons were formed relatively recently during the last Ice Age when sea levels were lower and the passage of ancient rivers carved out channels. Others may be older and may have come about as the result of the underwater equivalent of avalanches. 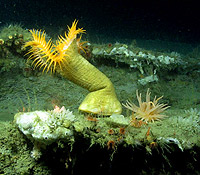 A venus flytrap anemone and other marine life on the floor of the Baltimore Canyon. DEEPWATER CANYONS 2012 EXPEDITION/NOAA-OER/BOEM

But whatever their age or provenance, the canyons abound with life. Golden tilefish, the oddly named knob-headed creature I was hoping to entice to eat my clam gobs, create pueblo-like burrow villages in the canyon walls and floors. Deepwater coral that can live for over a thousand years prosper in and around these structures. Meanwhile, further up the water column, broadbill swordfish work the “temperature breaks” that form when warm water eddies break off the Gulf Stream and mix with the canyons’ colder water. All this is topped off at the surface by spotted dolphin, tuna, marlin, mahi mahi, and myriad other pelagic species. Many of these creatures are extremely vulnerable and slow to rebuild if disturbed by humans.

But in spite of the incredible diversity and fragility of these ecosystems, the Obama administration, with a renewed appetite for domestic sources of oil and natural gas, is on the verge of jumping into the abyss — it is now considering allowing oil and gas exploration in the Canyons as soon as this year.

This policy is a marked change from that of the last half century. Though oil companies drilled 51 test wells throughout the Atlantic shelf in the 1970s and found the presence of more than seven millions of barrels of oil and trillions of cubic feet of natural gas, the U.S. government repeatedly blocked fossil fuel exploration there, and in 1990, President George H. W. Bush signed into law an outright moratorium on continental shelf drilling. But since 2008, when George W. Bush rescinded his father’s executive order, the federal government has been edging closer and closer to at least trying to accurately assess the value of what’s down there.

Speaking in Norfolk, Virginia last March, U.S. Secretary of the Interior Ken Salazar stated, “As part of our offshore energy strategy, we want to open the opportunity… to conduct seismic exploration… so we can know what resources exist in those areas.” Salazar called it “a critical component to this Administration’s all-of-the-above energy strategy.”

The beginning of the beginning of continental shelf energy exploration is seismic testing. John Filostrat, a spokesman with Interior’s Bureau of Offshore Energy Management, told me in an email that an environmental review is now underway “that could support approval of new seismic and other survey activity in the Mid- and South Atlantic planning areas as early as 2013.”

And while full-on Atlantic shelf development is still at least four years away (the current leasing plan does not include the Atlantic and expires in 2017), contractors understand that offshore prospecting is a long but potentially very profitable haul. John Young, a retired ExxonMobil seismic exploration expert who now consults for the Florida-based Continental Shelf Associates, says that “environmental impact statements are already being prepared and seismic companies are getting ready to submit permits. The chances are pretty good that at least some areas of the north and mid-Atlantic will soon be opened to exploration.”

Environmental organizations see seismic testing as a slippery slope. Brad Sewell, a Natural Resources Defense Council senior attorney, calls this kind of exploration “the gateway drug to full-fledged oil and gas development.” And though the public focuses on accidents such as BP’s Deepwater Horizon spill, Sewell and others worry that the seismic testing phase, which is done well before any drilling, poses considerable risks all by itself.

In seismic testing, guns filled with compressed air are dragged over a target area and fired repeatedly. These mini explosions create high-impact sound pulses that echo deep into the earth’s crust, giving oil and gas prospectors an acoustically derived image of the deposits below. While this may be good for the prospectors, saving them many millions on test wells, the noise from seismic testing can reach 230 decibels, well above the threshold of 180 decibels that federal researchers have set as a safe level for marine mammals. “Imagine dynamite exploding in your living room every 10 seconds for days, weeks or even months on end,” Oceana’s president, Andrew Sharpless, wrote in a recent USA Today editorial.

The scientific literature on the effects of seismic testing on marine mammals and fish is sparse.

To be fair, the scientific literature on the long-term effects of seismic testing on both marine mammals and fish is sparse, and perhaps the environmental reviews being commissioned by the government will add some scientific clarity. But Sharpless noted that the testing plan is rushed, given that “technologies that will significantly reduce the impact of seismic surveying aren’t far off.” Indeed, in time, an emerging technology called marine vibroseis, which uses a transducer to spread out the acoustic probing at a lower intensity over a longer period, could become a much more common tool in the bottom cartographer’s toolbox.

New technologies or not, Sharpless indicated, Oceana and other conservation groups would be digging in their heels in the years to come. “The current five-year plan for offshore drilling does not allow drilling activities until at least 2017,” he said. “We intend to fight to maintain and ultimately extend that prohibition.”

Fossil fuel exploration and drilling represent only one potential threat to the Atlantic Canyons. The other is commercial fishing. Until now, the deeper portions of the Canyons have been spared the impact of bottom trawling, and no one has yet to drag canyon walls where tilefish make their burrows. Yes, recreational anglers like myself have plied the depths, and draggers and long liners in some canyons have worked areas down to about 1,500 feet. But the essential ecological integrity of the very deep parts of the canyons are relatively untouched. In addition, better catch limits instituted in the 1990s have led to much improved fish stocks.

Many biologists and advocates believe areas of the canyons need to be set aside now as protected zones.

But reforms to U.S. fishing rules may change how fishermen seek their prey. Previously, fishermen were limited to a prescribed number of days at sea, the idea being that restricting fishing time limited the amount of fish a boat could catch. In the last decade, however, fisheries managers have decided that limiting overall catch instead of time at sea would be a better fulcrum against overfishing. But under this new regime, should fishermen not fill their quota on traditional fishing grounds, they now have unlimited time at their disposal. They could conceivably “go prospecting,” as NRDC’s Sewell puts it, in hopes of filling their quota in nontraditional places, like, for example, the deeper parts of the canyons. Even if they don’t catch anything in the abyss, just the effort of trying could be a big negative.

“You’re talking about slow-growing, vulnerable organisms down there,” Peter Auster, a marine biologist with the Mystic Aquarium and the University of Connecticut told me. “A small disturbance can last a long, long time.”

Many biologists and advocates believe that areas of the Canyons need to be set aside now as protected zones before fishermen or fossil fuel prospectors can become dependent on them. “You want to do this now,” Sewell said, “not just because the damage hasn’t been done yet, but because there’s no economic reliance yet. You have your best chance of protecting an area when no one wants to go into it.”

Funding should be available through several federal agencies for continued exploration and survey of the mid-Atlantic and Northeast canyons over the next three years. But once the research is done and environmental impact statements have been drawn up, a stark choice will have to be made. “Based on a modicum of science and a clear path toward economic gain,” Auster wondered aloud, “will we have the political will to set these things aside?”

For the moment, though, the competing interests that have so affected areas like the Gulf of Mexico have yet to arrive at the Atlantic canyons. The fishing remains extraordinary. The moment my gobs of clams touched the bottom of Atlantis Canyon off Montauk a series of violent yanks tilted my pole down. Pulling up, I felt the inexorable yaw of the bottom and cursed, fearing I’d hung up on the canyon floor. But as I pulled and pulled, I felt the mud burrows give way. All at once pop! — whatever I had been yanking was suddenly pulled free. And it had been heavy, my arms had become Jell-O hauling whatever it was I’d hooked 1,000 feet up from the deep.

Ten minutes later, I saw the reason for the difficulty. This time, I had caught not one but two big golden tilefish after less then 15 seconds of contact with the mysterious bottom of the canyon. And all at once it occurred to me how tilefish might have gotten their name. The unknown sea floor down there must be fricking tiled with them.