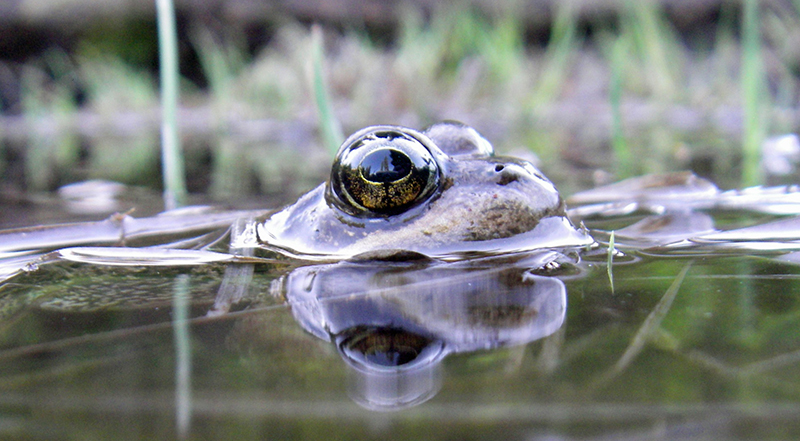 A Cascades frog submerged in an alpine wetland. MAUREEN RYAN

In the mountains of western Washington, Oregon, and northern California, the Cascades frog lives most of its life cycle buried beneath deep, wet snow. When summer rolls around, though, it emerges into alpine wetlands to mate and emit its signature call, which sounds a lot like a person chuckling.

The habitat of these chuckling frogs, though, and other amphibians, is being squeezed by what researchers call a climate vise. Receding glaciers here left the mountains pockmarked with thousands of lakes and ponds, some the size of a car and some acres in size. Originally fishless, 19th and 20th century managers introduced fish to 95 percent of the lakes, carrying them in on horseback or dropping them from airplanes.

It seemed like a good idea at the time. But the invasive trout have hammered the frog and salamander populations: They not only gobble up the tadpoles and juveniles, they limit the production of invertebrates, essential amphibian food. Amphibians can often escape the fish-filled ponds for nearby fishless wetlands, but as temperatures warm and snowpack shrinks, these survival outlets are waning and disappearing.

The solution? Fishing with a vengeance. After modeling which wetlands are most likely to disappear in the coming years, researchers and managers are going into the lakes with gill nets and pisicides — fish poison — to take out the troublesome trout. It seems to be working. In Washington’s North Cascades National Park, fish removal in nine lakes saw the return of long-toed salamanders and tailed frogs, though the Cascades frog hasn’t bounced back as a result of these measures yet.

The decline of the world’s amphibians is ramping up — a third of amphibian species are threatened with extinction worldwide, with 160 species having already disappeared.

‘There is no smoking gun in the declines — instead scientists call it a “smoking arsenal.”’

And while the causes of the decline — from fungal diseases to a warmer and drier world — are complex and the dynamics poorly understood, the kind of intervention taking place in the Cascade Mountains is something that scientists increasingly believe they have to do.

In 2013, a paper in PLOS ONE shocked amphibian researchers and conservationists with its finding that amphibians across North America were rapidly disappearing at a rate of more than 3 percent each year. “It’s a pretty fast decline,” said Michael Adams, a biologist with the U.S. Geological Survey’s Amphibian Research and Monitoring Initiative, one of the study’s authors. “Even species that the IUCN [International Union for Conservation of Nature] said were doing OK were disappearing.”

Researchers have found similar alarming declines at dozens of national parks, wildlife refuges, and other sites throughout North America. But they say that there is no smoking gun in these declines — instead, scientists call it a “smoking arsenal.”

“It’s different things in different places in different years,” says Evan Grant, a wildlife biologist with the USGS and one of the scientists on the North American research. The four main factors are climate warming and drought, disease, declining habitat, and pesticides. “We found that population trends are local — they are responding to local factors so that a coordinated global solution to any one of these threats is unlikely to solve the decline. It’s really working locally trying to figure out what’s most important in a location and come up with novel solutions.”

Biologists are seeing bizarre scenes, “extreme drying events,” said Maureen Ryan, an ecologist and conservation biologist at Conservation Science Partners, who led much of the work with the Cascades frog. One biologist saw the results of a mortality event in Olympic National Park with adult Cascades frogs. “In most summers they stay moist, but the whole landscape was so dry [the biologist] was finding encrusted, dried-up adults, which is really weird,” said Ryan. “They are only 100 or 150 meters from a pond, but basically it’s so hot and dry they didn’t move and their habitat dried up.” 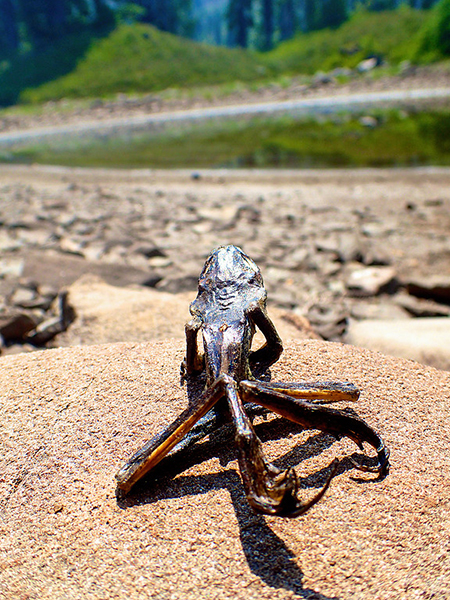 An urgent search is on around the world for adaptations to stem the precipitous decline. Some scientists have shifted their primary focus from research to conservation. “Where we are now is we know they are happening, we know it’s complex, we know we don’t have a full grip on all of the drivers,” said Ryan, “but we are going to do what we can to shift the pace of declines.”

Efforts to slow the decline are hamstrung by a lack of good data on the maddeningly complex ecosystems where amphibians live and problems they face. Wetlands of all types — fens, bogs, lakes, and potholes, among others — are some of the most biodiversity-rich environments on earth. Half have disappeared in the last 150 years, and climate change and human development are altering those that remain. But knowing where to act depends largely on modeling what will happen in coming decades.

Much of the focus then is on finding better tools. “People have always said that wetlands are too complicated to model,” said Ryan. “We’re trying to change that.” Ryan and her colleagues are using a combination of approaches to better understand and map wetlands in the Pacific Northwest, their hydrology, and what is happening to them. The researchers plan to export those techniques to other parts of the world.

Meghan Halabisky, a PhD student at the University of Washington, uses a combination of new and old imaging techniques that give a much more accurate picture of the landscape than past approaches. The new data, she says, is a revelation. “Compared to other ecosystem types, wetlands are very poorly mapped,” she said. “The national wetland inventory, the best map that we have, underestimated the wetlands by 50 percent of what I found. A lot of the habitat wasn’t picked up. “

For imaging at Mount Rainier National Park, the most helpful technology was LIDAR, which is an aerial laser scan of the topography. “It creates a 3D model of the landscape, and allows me to find water that might be obstructed by steep topography or trees,” Halabisky said. “With aerial imagery, it’s hard to see wetlands because there are too many shadows. But LIDAR is a way to get past the shadows that obscure the wetlands.”

Better data means creating better models about future scenarios. That, in turn, allows biologists to decide which habitat is most important and most at risk, and then to design conservation strategies. 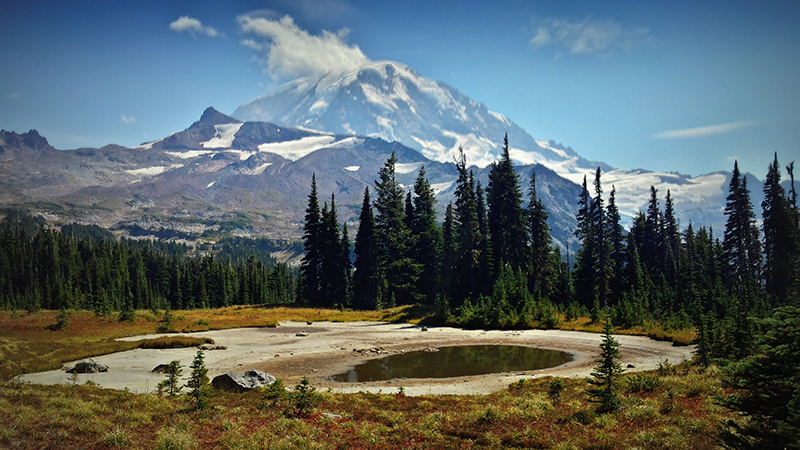 Mountain lakes in national parks or a national forest are fairly simple systems without a lot of human impact, which makes them fairly straightforward to study and manage. Outside of reserves, though, where the landscape and hydrology have been greatly altered, issues are often far more complicated.

The same researchers are now creating a similar model of the eastern Columbia Plateau, the dry region of eastern Washington and Oregon. There are many more sunny days here than on the Pacific Coast, which means they can use Landsat imagery that goes back to 1984. Because Landsat provides a visual record of the land for more than 30 years, it gives the history of these features, and much more of a story about their trajectory and trends.

For instance, in areas that were wetlands in 1984 and have been drying out over the last 30 years, you can look at the surrounding activity and tell what might be causing it. “What is the driver?” said Halabisky. “Is groundwater being pumped out? Is it a climate variable? Is it the surrounding land use?” An irrigation pivot sprinkler might have been installed, for example. “With a historical record you can begin to ask these questions.”

Meanwhile a wide range of conservation measures are being developed and used. In some places where the “hydro-period” is shortening as drought frequency increases — amphibians need about a hundred days to complete their life cycle — managers are lining ponds with plastic to stem water loss, or taking out trees to increase stream flow, or promoting certain kinds of forest growth for shading or to increase relative humidity.

Amphibians are being successfully treated in captivity with antifungals after a disease outbreak.

In the U.K., researchers from a group called Pond Conservation have created the Million Ponds Project as an adaptation strategy for freshwater species, including amphibians. The plan is to double the number of ponds on the landscape.

Disease is one of the great problems in the decline. The science, though, is often incomplete and confounding, and response currently is limited to emergency room measures. The chytrid fungus has killed amphibians around the globe in alarming numbers, and researchers are concerned that Bsal, a virulent fungus killing salamanders in Europe, could emerge here. People are successfully treating amphibians in captivity with anti-fungals, prophylactically or after an outbreak. Treating infections in the wild is a different matter. Scientists recently reported the first successful eradication of chytrid in the wild — an effort to keep Majorcan midwife toads, which despite their name are frogs and live on the Spanish Island of Majorca, from disappearing. Researchers bathed thousands of tadpoles in antifungal solution and used disinfectant in their pools to kill the chytrid fungus there.

Others are plucking frogs out of harms way. “Folks across Panama are picking up frogs and putting them in shipping containers and raising them and waiting until the disease is passed,” Grant said. “People are also thinking about microevolution and genetic resistance to disease.” That means figuring out how best to use populations of yellow-legged frogs in the Sierras, for example, that for some reason are resistant to the chytrid fungus that has devastated other populations of that species.

But the scenario is complicated by research that shows that disease dynamics are in part related to climate change. Warmer water temperatures may stress amphibians and reduce their resistance, or habitat changes may affect their recovery. “Amphibians have the ability to manage and clear infections,” says Adams. “We’ve seen that with chytrid fungus, and it’s important.

An unprecedented global wave of virulent fungal infections is decimating whole groups of animals — from salamanders and frogs, to snakes and bats. While scientists are still trying to understand the causes, Elizabeth Kolbert reports, they are pointing to the pet trade and degraded habitat as likely factors.READ MORE

They select a microhabitat with temperature gradients that are unsuitable to the fungus, and if they get in an extreme enough environment, the infection goes away. These things have thermal tolerances.” At the same time, warmer temperatures seem to help some species clear infections, and scientists in Europe are experimenting with heating the water amphibians live in, or the spaces where they are kept in captivity, to heal Bsal infections.

A lot of amphibian conservation then is about best guesses, tradeoffs, and apportioning limited funding based on woefully incomplete information. Carter Johnson at South Dakota State University has studied the numerous prairie potholes — estimated at 8 million — that exist across 270,000 square miles in the Dakotas and Canada. Conservationists have bought land with potholes in western South Dakota because native grasslands around them are intact, providing habitat for amphibians, ducks, and other species. That area, though, is warmer and could change faster than other parts of the pothole region. “So the question is: Where do you put your money?” he said. “If the West isn’t going to be favorable anymore, it’s going to be too dry, then don’t put all of your conservation money there, put it in the East where the climate is going to be more favorable. But the land values are higher there and so easement costs are higher and restoration costs are higher.”

Editor’s Note: Earlier versions of this article included references to a paper in Scientific Reports — Nature that is under embargo.