With its tiny houses nestled along the main road and its red-brick church, Töpchin — just 25 miles outside of Berlin — is a traditional-looking Brandenburg village. But heading east through the marshland that borders the village, a visitor encounters the unexpected: five huge Asian water buffaloes.

The species was native to Europe until 10,000 years ago, when hunting shrunk its range to the continent’s far southeast. So Germans know these beasts only from pictures of them in fields and rice paddies in Asia. “Some people are really confused when they see the water buffaloes,” says Holger Rössling, the man who set the animals free in Töpchin in the summer of 2011. But the black creatures with massive horns and an impressively muscular build appear to be very much at ease in their new home. And they are meant to stay.

Rössling is a project manager with the Brandenburg Nature Conservation Fund, a government agency in the federal state surrounding Berlin. The group brought in the water buffaloes from a special breeder in France so they would graze threatened tracts of fens and remnant inland salt marshes, as German cows have long since lost their affinity for grazing in such wet or nutrient-poor environments.

The Töpchin project is an example of a growing conservation trend in Europe — using large, exotic herbivores to enhance the diversity of native flora and fauna. Many people still believe that nature conservation is all about leaving native plants and animals alone, or restoring their habitats to a wild state. But in a world dominated by humans and rapid environmental change, things have become more complicated. The answer isn’t always to strive for a regionally “pure” mix of native species. A growing number of conservationists now seek to employ exotic species for managing native biodiversity.

“Our landscape is dominated by human use, so we should allow ourselves to be creative and flexible with how to manage it for maintaining biodiversity,” says Reinhold Leinfelder, a bio-geologist at the Free University of Berlin and former director of Berlin’s Natural History Museum.

What is happening in Germany is complementary to so-called “rewilding,” a global movement that aims to expand core wilderness areas, connect them via corridors that allow humans and animals to co-exist, and protect and reintroduce top predators. One initiative, Rewilding Europe, led by conservation groups such as WWF, aims by 2020 to rewild 1 million hectares of land spread across 10 reserves, from Spain, to the Danube, to the Carpathian Mountains. By contrast, the projects in Germany aim to restore and create biologically enriched landscapes shaped by humans. 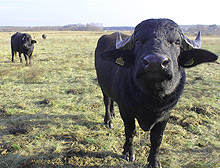 Within a short time, a number of similar projects like the one in Töpchin have sprung up across Germany. Only a few kilometers west of Berlin, the Heinz Sielmann Foundation has set free 19 Przhevalsky horses, natives of Mongolia, along with 41 European bison, in the Döberitzer heathland, a former military training ground. The goal is for the wild horses and European bison to regularly graze the area, cropping tree saplings and encouraging the spread of heat-loving species found in the heathland.

A third project near Berlin that uses large herbivores for conservation is set in another truly anthropogenic landscape — a former sewage treatment farm. In the 1980s, the sewage farm was shut down and discussions ensued about what to do with the property. Since 2011, the result is a project that aims to create one of the largest sylvan pasture areas in Europe.

“On more than 800 hectares, we are now trying to create this new landscape type that is ideal for rare and endangered species — an open forest,” says Andreas Schulze, project manager for Nature in the Barnim Region, a public/private partnership of local authorities, environmental organizations, organic farms, and private citizens. Schulze uses yet another mix of herbivores for the grazing: Koniks — ponies supposedly derived from the ancient European wild horse — as well as British cattle varieties like the White Park and the Scottish Highland, which are more robust and thus cope better with rugged and wet terrain than ordinary German cows. In Holland’s Oostvaardersplassen nature reserve, a similar mix of koniks and other herbivores is used to keep biodiversity levels high.

“Grazing with koniks and other large herbivores is the best approach for conservation in Germany,” says Josef Reichholf, a prominent zoologist and evolutionary biologist from Munich’s Technical University, who has long advocated the reintroduction of large herbivores to enhance biodiversity in Germany’s human-dominated landscape. Reichholf points out that the German landscape is exposed to a constant downpour of fertilizer from the sky, as car and factory exhausts add nitrous oxides to the atmosphere. This airborne fertilizer helps non-specialized plants grow, which reduces and finally excludes rare plant species adapted to nutrient-poor habitats. Dense vegetation also creates a damp, cool surface microclimate, which is detrimental to many species of insects and birds of the open landscape. Large herbivores crop this excessive plant growth, allowing rarer native species to flourish.

Unlike in the tropics, large parts of Europe’s biological diversity occurs outside of forests on meadows and heathlands.

Unlike in the tropics, large parts of Europe’s biological diversity of animals and plants occur outside of forests: on meadows, in fens, and on heathlands. “We need the buffaloes to remove biomass, otherwise these sites would loose their special plants and be overgrown by ubiquitous species,” says Rössling from the Brandenburg Nature Conservation Fund. And what of German cows? “Buffaloes are very resilient, they have strong hooves and munch away on nearly all kinds of plants, whereas modern cows are simply not adjusted any more to living in marshlands,” he says.

Zoologist Reichholf sees a wider importance of experiments like those around Berlin for the whole of Europe. Currently, European consumers eat meat and drink milk mainly from cows kept in large, industrial facilities and fed with imported soy from rainforest nations. “We can’t continue like this and have to learn again how to obtain milk and meat from a biologically diverse landscape,” he says. The German projects showcase how nature conservation and meat production could go hand in hand. “The current projects should be viewed as an important reality tests for a much broader application,” Reichholf says.

The three projects demonstrate that in Europe today conservationists must often apply intensive management strategies if they want to keep biodiversity high. After centuries of human use, returning to a state of wilderness will often make landscapes poorer in species, not richer, hence the rationale behind many conservation schemes in Germany that involve introducing exotic grazers. It’s well established among biologists here that the large forests covering Germany after the end of the last Ice Age were poorer in species than the “cultural landscape” that developed later through human use. The big loss of biodiversity started with industrialization and the introduction of modern farming techniques.

German conservationists long tried to re-establish the pre-industrial landscape of the 18th and 19th centuries, following romantic ideals of beauty and untouched nature. Rössling’s project is departing from that traditional baseline — by many millennia. Buffalo are a reintroduction that reaches back more than 10,000 years. But the true reference point is the future, says Rössling. He sees himself building something new with the best available blend of species, even if they have not been native for a long time, or are not native at all.

“These projects make more diversity possible in a landscape that suffers from industrial agriculture,” says Gerhard Wiegleb, professor for ecology at the Brandenburg Technical University of Cottbus. He notes that water buffaloes long lived in Europe and that close relatives of the Przhevalsky horses also inhabited the continent until roughly 10,000 years ago. “They appear exotic, but they are not totally alien here in their ecological role as large herbivores,” says Wiegleb.

One scientist sees himself building something new with the best available blend of species.

He says the key in reintroducing species that disappeared long ago is intensive monitoring of the effect of these large herbivores on the landscape. “Many projects are started with good intentions, but then there is a lack of scientific data to see what has happened,” says Wiegleb. The projects around Berlin are too new to have been effectively studied.

These projects highlight the challenges of nature conservation in what U.S. author Emma Marris calls the modern “rambunctious garden” of novel ecosystems. Many scientists now even proclaim a new geological epoch, the Anthropocene, in which the long-held boundaries between nature and culture vanish due to the huge impact of humans on the planet.

At the Töpchin project, the Asian water buffaloes were introduced using European Union funds and an “eco-compensation” payment from the construction of the Berlin Schönefeld Airport, due to open in 2013. Over the past millennia of post-glacial landscape development, Brandenburg has harbored tens of thousands of hectares of uncommon habitats, such as calcareous fens, a subtype of wetland rich in calcium and home to marsh orchids and rare feather mosses.

Another increasingly rare habitat is the region’s inland salt meadows, located on the leftovers of an ancient ocean. These habitats are home to a unique mix of animal and plant species, like milk seaweed, that normally only occur far away along the North Sea and Baltic coasts. But in recent decades drainage and industrial agriculture have shrunk these habitats dramatically. 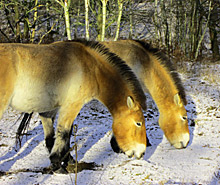 Przhevalsky horses, a rare species native to Mongolia, have been introduced to the Döberitzer heathland. PETER NITSCHKE

Closer to the city is the 3,400-hectare Döberitz heath reserve that for 300 years was used as a military training area — first by the Prussian army, then the Nazis, and until 1989 by Soviet forces. The heavy shelling and use of tanks created a landscape that is exceptionally open and nutrient-poor. A wide range of species that like sandy, warm habitats have moved in, including nightjars and hoopoes, two bird species that have become rare in recent decades. But given the nitrogen-enriched rain and dense forests in the region, the heathland would be overrun by trees without intensive human management.

In 2011, the Sielmann foundation began setting free European bison and introducing Przhevalsky horses, which largely went extinct in their native Mongolia in the 1960s but have since been bred by zoos, including one in Munich. The heath offers the bison and Przhevalsky horses a semi-natural habitat that they like, and they keep the landscape open for rare specialists, such as St. Bernard’s lily and marsh gentian. “The horses’ and bisons’ positive effect on the heathland is already measurable after a very short time,” says Peter Nitschke, head of the Döberitz heath project. The foundation is financing the project in part with entrance fees for a wildlife compound that has become popular for Berlin families.

In Töpchin, local residents have warmed to their exotic neighbors. “At first, we were very skeptical,” says Kerstin Simon, who runs a farm with her husband Detlef. “We thought conservationists wanted to set more land aside for non-use.”

Soon, however, the Simon family discovered that the buffalo project was a great opportunity for them. They have allowed the animals to graze on their land, too, and they can slaughter an animal from time to time. Later this year, the Simons will start marketing meat and sausage from water buffaloes. “We reckon Berliner city dwellers will like it as a taste of the wild,” says Kerstin Simon.