Imagine standing on a street corner in Manhattan, in need of a taxi to take you from Union Square up to Columbia University. You punch your destination into an app on your phone, which tells you the cab should be there in 30 seconds. A car pulls up as promised, and you get in and relax on your way uptown, just as with any cab ride. The only difference? No one is driving this cab. 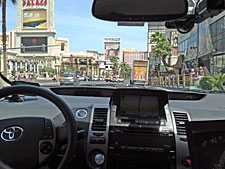 Courtesy of Google
Google’s self-driving car cruises along the Las Vegas strip on a test run.
Â
This is one scenario that impressive advances in self-driving vehicle technology have turned into a legitimate possibility in the not-so-distant future. Since the early days of cars, we have been looking for ways to automate them, including the cruise control and parking assist systems available today. But as high-profile projects by Google and others have begun to show, we are getting closer to much more thorough automation, where cars may actually start to drive themselves with only minimal assistance from the person at the wheel. From drastic safety improvements to huge reductions in fuel use and accompanying emissions, the potential of self-driving cars is impressive. And they may be coming sooner than you think.

The environmental benefits promise to be significant. Self-driving technology could greatly reduce the risk of accidents, leading to

One expert says some of the self-driving technology is less than ten years away from being mass produced.

far-lighter cars and slashing fuel consumption and emissions by more than a factor of 10 in some cases. Fewer traffic jams would also cut fuel use.

“I see driverless [cars] as being the most transformational technology that will impact roadway transportation,” said Lawrence Burns, head of research and development for General Motors from 1998 to 2009. Burns now consults for Google’s pioneering self-driving car program, and he is confident that some of the technology is only five to ten years away from being mass produced.

If the idea of a car that drives itself seems ridiculous, the first thing to remember is that a car you buy off the lot right now already has a lot of automated driver-assist systems in place. Drift out of your lane on the highway and some models can sense it and nudge the steering wheel back toward the center of the lane. Adaptive cruise control can slow your car down when approaching a vehicle in front and speed your car up again when it’s gone. Some new models even can take parallel parking out of your hands.

“We have moved to cars that have millions of lines of code and advanced systems that will think about where you want to go and will change the brakes and steering to allow you to actually get there,” said Bryant Walker Smith, a legal fellow at Stanford University working on the law and policy of autonomous vehicles. “So we’re far along on the spectrum of automation.”

All of these new systems make use of sensors that let the car learn what surrounds it, from vehicles to bicycles. The sensors include GPS, cameras, lasers, and radar, and they’re only going to get better and cheaper. Combining this technology with other prospective technology that would control the flow of cars on highways and, eventually, cities, is what will be truly revolutionary, say Burns and others.

“The real secret sauce of all of this is what we call sensor fusion,” Burns said. “How do you fuse together what the laser is seeing, what the radar is seeing, and what the camera is seeing, with the databases that you have already, and be very,

We may soon start to see driverless systems that can take over in certain situations.

very confident that what you’re instructing the car to do is the right thing?”

In other words, cars need to learn better what to do with all the information they gather. In current systems like Google’s self-driving car (a modified Toyota Prius), even minor anomalies — a construction site, for example — can confuse the car’s computer and require a human to take over.

Experts like Burns say we won’t suddenly jump to a fully autonomous car. Instead, we will start to see systems that can take over in certain specialized situations, like traffic jams. For example, if you get caught on a Los Angeles freeway at rush hour, with miles to go and bumper-to-bumper traffic, just press a button and let the car do the mindless task of moving ahead a few inches at a time. If the car needs help, it will let you know.

Inter-vehicle communication is, of course, crucial. Instead of just sensing the next car’s position, your car will be able to talk to it. If cars can send data to each other on position, speed, braking, and steering direction, they can predict where the other car will be soon afterward, and hopefully avoid hitting it.

All of these systems will have to call on massive databases of experience, though, to know what to do in a given situation. That experience is being gathered today, and Google is in front of the pack. The company’s self-driving cars have logged more than 250,000 miles on public roads. Burns goes out to California to consult for the project once a month and rides hands-free down the stretch of Highway 101 between San Francisco and San Jose. He said it is surprisingly easy to get used to and is relaxing.

Virtually every car manufacturer has discussed plans for automated systems. Ford Chairman Bill Ford Jr. has said that an autopilot option should be available within a decade and that a traffic jam assist system might be ready well before that. Traffic Jam Assist would control the gas, brakes, and steering and would most likely do a better job of smooth acceleration and deceleration than humans do, helping save fuel. “People think that autonomous driving is science fiction, but the fact is that the technology is already here,” Linda Wahlstroem, project manager for Volvo’s self-driving car initiative, told the BBC.

The overriding reason for self-driving cars is to save lives and reduce injuries. The technology will also slash the costs of car accidents, estimated by the American Automobile Association at $300 billion annually in the U.S. That cost is a direct result of the fact that we humans are, frankly, terrible drivers.

Smith said about 90 percent of all crashes are caused at least in part by human error.

One study by the National Highway Traffic Safety Administration concluded that various forms of vehicle-to-vehicle communications could cut all crashes by 79 percent. Some versions of this are feasible today. A Ford system, using modified Wi-Fi signals and GPS, enables cars to broadcast a signal 10 times a second containing information on position, speed, and other basic items. This data, combined with information coming in from surrounding vehicles, could provide an imminent collision warning. If, for example, a truck in front of you blocks your view of a car that is forced to slam on the brakes, you would still know of that rapid stop because the braking car would send out a signal on its change in speed, and your car would tell you about it with a noise or light.

Other technology, known as dedicated short range communications (DSRC), enables a car to tell an intersection that it is approaching. A computer system at the intersection would then be able to coordinate all the approaching cars — assuming they were self-driving cars — and funnel them through the crossroads without stopping. The reduction in crashes could be dramatic.

Some companies have created small, two-seat driverless vehicles designed only for city streets.

As originally pointed out by climate and energy scientist Amory Lovins, only about one percent of the energy in a gallon of gasoline goes to moving the driver forward. About 75 percent of the energy leaves the tailpipe as heat and almost all the rest is needed to move a 4,000-pound car. But the bulk of that 4,000 pounds is only there to keep the driver and passengers safe in the relatively unlikely event of a major crash. If that risk was reduced dramatically, 4,000 pounds might come down closer to 750 to 1,000 pounds.

That’s how we might arrive at the Manhattan autonomous taxi scenario. These wouldn’t look like cabs do today, but might be very small, two-seat vehicles designed specifically to stay on city streets and never approach real highway speeds. Some companies have created concept cars in this spirit, like the GM-Segway collaboration called the EN-V.

A fifth of the bulk means a fifth of the fuel, and of course a fifth of the emissions — a big deal for global warming, considering that transportation accounts for 13 percent of total carbon dioxide emissions. In addition, if cars came down in weight to that extent, then the economics of the electric car start to get even more attractive. Take a five-fold reduction in energy use because of mass, and another three-fold reduction thanks to the improved efficiency of electric vehicles, and suddenly that little cab flying around Manhattan with no driver is using 15 times less energy than a standard car. Even without changes in vehicle weight, improved traffic flow and reduced congestion could significantly cut fuel consumption.

Will electric cars one day become part of a network of rechargeable batteries that can help smooth out the intermittent nature of wind and solar power? Many experts believe so, pointing to programs in Europe and the U.S. that demonstrate the promise of vehicle-to-grid technology.READ MORE
Though the technology itself may seem inherently futuristic, the car’s ability to drive itself likely won’t be the factor standing in the way of adoption. Indeed, Burns thinks the sensor fusion issues will be worked out within five years or so, with semi-autonomous vehicles on the roads within another five after that. Instead, key challenges will involve human factors — from simple consumer acceptance of a paradigm shift, to bureaucratic issues involving regulations and liability. Two states, Nevada and Florida, now expressly permit autonomous vehicles under certain circumstances, and Google received the first license in Nevada to actually operate such a vehicle in early May. Getting all states on board may take some time, though, and Smith said that determining liability in accidents when a computer is doing the driving is a major obstacle. Some people have also raised privacy concerns based on the vehicles’ sensor capabilities.

Still, there is a very real possibility that within the next decade self-driving vehicles will begin to flip a century-old car regime on its head. It isn’t quite flying cars, but this is one science fiction staple that could be coming to a highway near you.