Like plastic bags, coal, and SUVs, beef has few friends in the environmental community. Most environmentalists would point to beef — in particular, beef cattle that spend their final days in confined feedlots — as being responsible for an array of ills — the greenhouse gas emissions that the cattle generate; the groundwater pollution from their manure; the use of antibiotics in animal feed; the vast quantities of monoculture corn grown to feed the cattle; and the enormous amount of chemical fertilizers and water needed to grow the corn. As advocacy group Food and Water Watch put it in a 2010 report, “The significant growth in industrial-scale, factory-farmed livestock has contributed to a host of environmental, public health, food safety and animal welfare problems.”

Jason Clay believes those problems can be fixed. Clay, 61, who grew up on a Missouri farm, is senior vice president for market transformation at the World Wildlife Fund (WWF), and an expert on the environmental impacts of farming. He has now set out to “green” the hamburger — along with the steak, the prime rib, and the rest of the steer.

To that end, WWF this year helped launch the Global Roundtable for Sustainable Beef, an association of businesses and environmental groups that has begun to “facilitate a global dialogue on beef production that is environmentally sound, socially responsible, and economically viable.” The roundtable plans to identify the best practices for raising beef, and spread them widely using the leverage of retailers like Wal-Mart and brands like McDonald’s to do so. Someday your burger may come with fries, a Coke, and a “green” seal of approval.

WWF is accepting financing from the National Cattlemen’s Association and JBS, the world’s largest beef producer.

This is a controversial undertaking for a bunch of reasons, and not just with vegetarians. First, cattle are by nature inefficient converters of plants into protein, so beef has a far bigger environmental footprint than foods like fish or even poultry. Second, given the strong involvement of the beef industry, the roundtable is likely to challenge a green orthodoxy that says cattle should be allowed to run free on pasture and eat grass. (All cattle are grass-fed when young, but conventionally raised cows spend most of their lives in Concentrated Animal Feeding Operations, or CAFOs, where they are fed corn.)

Third, WWF has chosen to collaborate with — and, more importantly, to accept financing from — industry partners that run factory farms, medicate the animals, and tout the health benefits of a T-Bone steak. The roundtable’s members include JBS, the world’s largest producer of beef; McDonald’s and Wal-Mart; Cargill, one of the world’s largest commodity trading companies; Merck Animal Health and Elanco, which make medicines for livestock, and the National Cattlemen’s Beef Association. Can the beef-it’s-what’s-for-dinner crowd really be trusted to reform the industry?

Environmentalists could take a far simpler approach: Advise people to eat less beef. Beef, after all, has twice the greenhouse gas emissions of pork, nearly four times more than chicken, and more than 13 times as much as vegetable proteins such as beans, lentils and tofu, according to the Environmental Working Group. Eating less meat is the most important thing an individual can do to curb climate change, some scientists say. Citing a study by Gidon Eshel, a research professor at the Bard Center for Environmental Policy, and Pamela A. Martin, an assistant professor of geophysics at the University of Chicago, the New York Times’ Mark Bittman has noted that if Americans were to reduce their meat consumption by a mere 20 percent, “it would be as if we all switched from a standard sedan — a Camry, say — to the ultra-efficient Prius.”

WWF’s Clay says the reality is the world will need more, not less, beef in the decades ahead.

Nevertheless, green groups that readily fight coal plants or suburban sprawl have for the most part shown little desire to do battle with meat. The Meatless Monday campaign was started not by environmentalists but by the school of public health at Johns Hopkins. The Mayo Clinic has more to say about meat than The Nature Conservancy, although TNC’s chief executive, Mark Tercek, is a vegetarian. Another vegetarian, Danielle Nierenberg, who directs the Nourishing the Planet program at the Worldwatch Institute, explains: “Most environmental groups don’t want to tell people what to eat or what not to eat. It’s a personal issue that’s tied to your culture, to your history, to what your mom fed you when you were five years old.”

Americans may be persuaded to eat less beef — in fact, they already are doing so — but WWF’s Clay says the reality is that the world will need more, not less beef, in the decades ahead. The global appetite for meat is rising, particularly in emerging markets, and it will continue to grow, as incomes and population increase, he says. Besides, WWF can’t tell people to eat less beef “and then try to work with the industry to make it better,” Clay says. 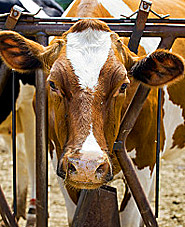 That’s understandable. But WWF does more than work with the industry: It raises money from its corporate partners. In the U.S., WWF collected $13.3 million in corporate donations in 2011, accounting for about 6 percent of its budget. Cargill has identified itself as a WWF donor but, aside from that, WWF won’t disclose the names of its donors or how much money it has raised from the meat industry — despite the fact that WWF’s website says transparency is one of the “most important guiding principles for our corporate engagement.”

Clay says that changing beef production is impossible without industry collaboration, and its partners are willing to pay for advice and insight that will serve their companies well in the long run. Still, other environmental groups work closely with business but accept little or no corporate funding. The Environmental Defense Fund’s corporate donor guidelines, for example, specifically prohibit contributions from the livestock industry.

Amy Larkin, who has led successful corporate engagements with Coca-Cola, Unilever, and the Consumer Goods Forum as the solutions director at Greenpeace USA, says green groups that take corporate donations will have a hard time pushing for the transformational changes that business needs to make. “If you want to make serious, dramatic change, you have to be brutally honest,” she says. “Who wants to tell the truth to the hand that feeds you? At some point, you have to be free to say ‘not good enough’ and walk away from the table. That’s hard under any circumstance, but harder if a company is giving you money”

In their defense, WWF and Clay can point to a long history of working productively with industry. They’ve formed NGO-corporate alliances like the Forest Stewardship Council and the Marine Stewardship Council that have set standards and certified environmentally friendly forest products, wild fish, palm oil and soy. WWF’s theory of change is simple: Rather than wait until billions of consumers decide to shop their way to a more sustainable planet, it wants to persuade a hundred or so global brands and retailers to produce and sell greener products. “Don’t give consumers bad choices,” Clay says. “Make sure that everything on the shelf is good.” Other NGOs in the beef roundtable include the Rainforest Alliance and the National Wildlife Federation.

‘Who wants to tell the truth to the hand that feeds you?’ asks Amy Larkin, of Greenpeace.

All the partners say the roundtable’s work will be driven by science. If that leads to more of the large-scale feedlots that some foodies find distasteful, so be it. Clay and others point to evidence that indicates that beef cattle raised in CAFOs have a lighter footprint than pasture-raised beef. “I see a lot of ideology and assumptions being thrown around as science,” Clay told me. “We have to start figuring out what we can measure, and what we can manage. How many liters of water does it take to produce a calorie? How many meters of land?”

Globally, Clay notes, the largest environmental impact of agriculture is the conversion of natural habitats to farm land. Beef production is a land hog; it accounts for 60 percent of the land used to produce food but generates about 1.3 percent of the world’s calories. (Outside of the U.S., most cattle graze.) CAFOs diminish those impacts — in part because they use far less land, and in part because the cattle in feedlots grow bigger and faster: The U.S. produces more beef than Brazil, with about half the cattle. At the roundtable’s first meeting in Denver, Chandler Keys, an executive with Brazil-based JBS, the world’s largest beef producer, told reporters: “In the next 20 years, you’re going to see more cattle in Brazil come off grass and going into grow yards.”

Others say that’s exactly the wrong approach. Fewer cattle should be in feedlots, they say, and land now devoted to growing corn and soy should be allowed to revert to pasture. The Natural Resources Defense Council, which accepts no corporate money, lists on its website 10 reasons why meat lovers should opt for beef that have been fed all their lives on pasture. Courtney White of the nonprofit Quivira Coalition writes about carbon ranching, a way of raising cattle that enriches soil, sequesters CO2 and produces what he calls “climate-friendly beef.”

By email, the author Michael Pollan tells me: “When it’s done well, (grazing) is a great positive — to carbon sequestration, improved fertility, soil biodiversity, etc. The idea of putting more animals of grass is also to re-perennialize a bunch of corn fields in the midwest, which will have tremendous environmental benefits. It’s all part of shifting from annual monoculture to perennial polyculture farming, which I would think any environmental organization would want to support.”

By phone, the NRDC’s Jon Gelbard, a PhD biologist, says the debate about how to produce beef should not be reduced to an either-or. “People are lobbing life-cycle metrics over a fence at each other,” he says. Environmental impacts depend on the places where cattle are raised and corn is grown, as well as ranching and feedlot practices. “The scale will tip between grass-fed and feedlot depending on the inputs,” he says. Like Clay, he says metrics and standards are needed to drive better practices. “We need a signal in the marketplace,” he says. “Let’s create a system that generates a race to the top.”

CORRECTION: An earlier version of this article failed to attribute a statement about a study by Gidon Eshel and Pamela A. Martin. The statement was made by Mark Bittman of the New York Times.