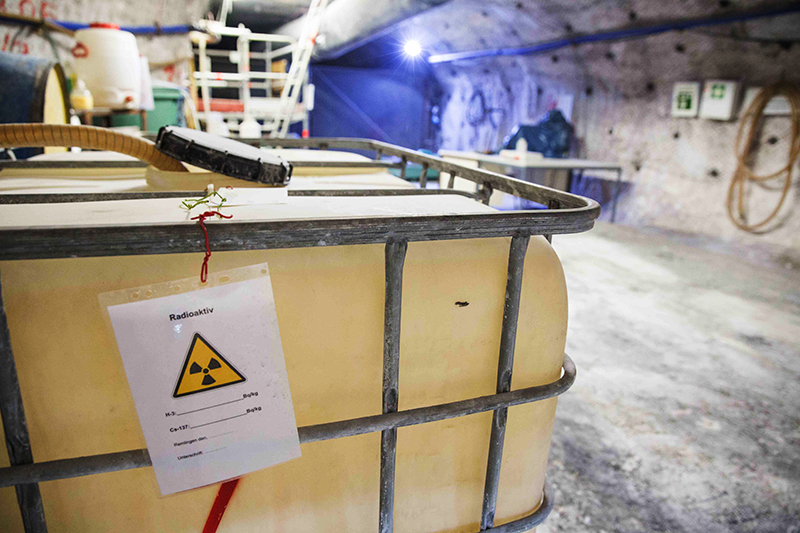 The cavern of the salt mine is 2,159 feet beneath the surface of central Germany. Stepping out of a dust-covered Jeep on an underground road, we enter the grotto and are met by the sound of running water — a steady flow that adds up to 3,302 gallons per day.

“This is the biggest problem,” Ina Stelljes, spokesperson for the Federal Office for Radiation Protection, tells me, gesturing to a massive tank in the middle of the room where water waits to be pumped to the surface.

The leaking water wouldn’t be an issue if it weren’t for the 125,000 barrels of low- and medium-level nuclear waste stored a few hundred feet below. Most of the material originated from 14 nuclear power plants, and the German government secretly moved it to the mine from 1967 until 1978. For now, the water leaking into the mine is believed to be contained, although it remains unclear if water has seeped into areas with waste and rusted the barrels inside.

The mine — Asse II — has become a touchstone in the debate about nuclear waste in the wake of German Chancellor Angela Merkel’s 2011 decision to end the use of nuclear power following Japan’s Fukushima disaster. The ongoing closures have created a new urgency to clean up these nuclear facilities and, most importantly, to find a way to safely store the additional radioactive waste from newly decommissioned nuclear reactors. Nine of the country’s 17 nuclear power reactors have been shut down and all are expected to be phased out by 2022.

In addition to Asse II, two other major lower-level nuclear waste sites exist in Germany, and a third has been approved. But the costs associated with nuclear waste sites are proving to be more expensive, controversial, and complex than originally expected.

And Germany still hasn’t figured out what to do with the high-level waste — mostly spent fuel rods — that is now in a dozen interim storage areas comprised of specialized warehouses near nuclear power plants. Any future waste repository will have to contain the radiation from spent uranium fuel for up to a million years.

‘People in Germany think that nuclear is worse than coal, and I think that’s a shame for all of us,’ says one nuclear power advocate.

Given the time frames involved, it’s not surprising that no country has built a final repository for high-level waste. In Germany, a government commission on highly radioactive nuclear waste spent the last two years working on a 700-page report, released this month, that was supposed to recommend a location. Instead, the report estimated that Germany’s final storage facility would be ready “in the next century.” Costs are expected to be astronomical.

“Nobody can say how much it will cost to store high-level waste. What we know is that it will be very costly — much higher costs can be expected than [what] the German ministry calculates,” said Claudia Kemfert, head of energy, transportation, and environment at the German Institute for Economic Research. The exact number, she said, “cannot be predicted, since experience shows that costs have always been higher than initially expected. ”

At the Asse II mine, roughly $680 million has been spent in the six years since the cleanup began, and the price tag for operations last year totaled $216 million. A 2015 report by Germany’s Environment Ministry noted, “There are currently no technical plans available for the envisaged waste recovery project which would allow a reliable estimate of the costs.”

No one expects to start moving the barrels at the mine until 2033, and estimates of finishing the process extend to 2065. Total costs for moving the waste to a future storage site will almost certainly be in the billions of dollars, with current estimates of just disposing of the recovered waste at $5.5 billion.

The waste issue is one reason nuclear power has been so controversial in Germany and why there is broad support among the public for phasing it out, with three-quarters of the German population saying they are in favor of Merkel’s decision, according to a survey this year by the Renewable Energy Hamburg Cluster.

“Nuclear in Germany is not popular,” Kemfert said. “Everybody knows it is dangerous and causes a lot of environmental difficulties. Nuclear has been replaced by renewables — we have no need for nuclear power any more.” 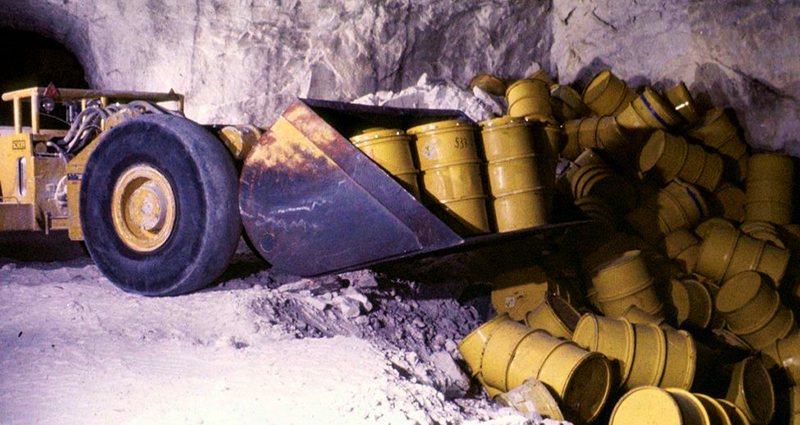 Throughout Europe, it is difficult to find many voices calling for nuclear power as a bridge technology to fight climate change. But not all environmentalists have rejected nuclear.

“People in Germany think nuclear is worse than coal, and I think that’s a shame for all of us,” says Kirsty Gogan, a former spokesperson for the Nuclear Industry Association and a co-founder of the London-based Energy for Humanity, an NGO that describes itself as a pro-nuclear environmental group. “Nuclear is not posing an immediate threat to anyone’s health or the environment. Coal is the enemy of our earth and our climate, so I would prioritize shutting down coal.”

In Germany, negotiations with utilities over who will pay the denuclearization costs have often centered on how much the utilities can afford. The four nuclear utilities in Germany — publicly-traded RWE; E.ON; EnBW, which is majority publicly-owned; and Swedish-owned Vattenfall — are struggling economically as decentralized wind and solar power have undercut wholesale electricity prices and eaten into profits. Last year, E.ON, Germany’s largest utility, lost $7.7 billion.

The four companies have already set aside $45 billion for decommissioning nuclear power plants. But in April, Germany’s Commission to Review the Financing for the Phase-Out of Nuclear Energy recommended that the utilities pay an additional $26.4 billion into a government-controlled fund meant to cover the costs of long-term storage of nuclear waste.

The utilities were unhappy with the commission’s conclusions and released a joint statement saying $26.4 billion would “overburden energy companies’ economic capabilities.” Even so, few experts expect those sums to cover the total eventual costs. 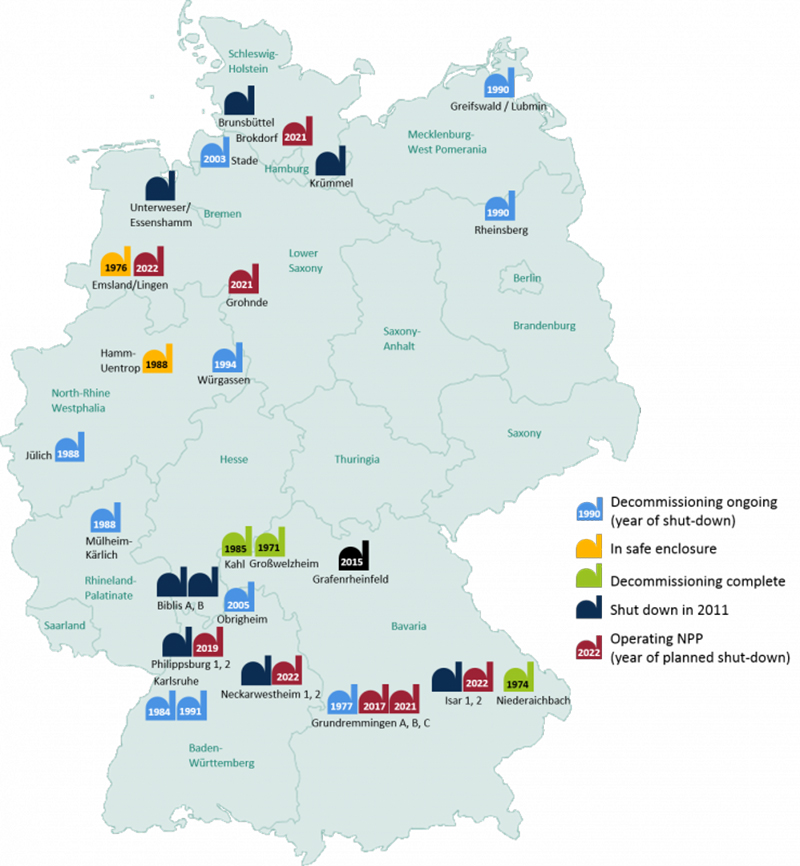 “Some billions now are better than making them bankrupt,” said Michael Mueller, who chairs a government commission on highly radioactive nuclear waste. “So, it’s a compromise that had to be made.”

The utilities are clear about where they see the responsibility: “The temporary and final storage of nuclear waste in Germany is an operative task of the German government, which is politically responsible for this,” the utilities said in a statement. Indeed, if the commission’s recommendation becomes law, then the German government will be on the hook for any storage costs beyond the $26.4 billion paid by the utilities.

“Asse II shows us that radioactive waste storage is a complex problem that is not just about dumping it somewhere,” said Jan Haverkamp, a nuclear energy expert at Greenpeace. “There are many open questions, and those questions are going to lead to a lot more costs.”

Radioactive water was first detected leaking at Asse II in 2008, and the German Bundestag passed a law five years later that mandated removal of the waste. Above ground, the complex is just a few fenced-in buildings amid forests and farms. Underground, passageways have closed or collapsed. One main elevator shaft going down into the mine can be used for transporting large machinery, such as front loaders, some of which has to be welded together in underground workshops. As for the areas with actual waste, workers have spent years drilling into just one of 13 chambers to test for gas and radioactivity.

“No one goes in,” said Stelljes. “We haven’t even developed the machines we would need for moving the waste.”

With nuclear waste storage and decommissioning, governments worldwide have opted for halfway solutions.

Asse was intended as a secret stopgap solution when West Germany first starting shipping nuclear waste there in 1967. The problem is, no one seems to have come up with anything better since. Germany still doesn’t have a permanent nuclear waste storage facility. One other underground site, Morsleben — a salt mine used as a nuclear dump by the former East German government — is slated for a cleanup expected to cost at least $1.6 billion.

The most dangerous and controversial waste is heavy-metal-laden, heat-producing waste from spent fuel rods. Germany expects the total of that high-level waste to take up 28,100 cubic meters (1 million cubic feet) — a fraction of the volume of low- and medium-level waste the country must eventually store. Preliminary plans from Germany’s Federal Office for Radiation Protection call for a high-level waste repository to be built by 2050, with storage complete by 2130, and final sealing of the repository as late as 2170.

“No one has a finished concept [for storage of high-level waste], so no one can give us a finished budget,” Haverkamp said. “I won’t give an estimate anymore, but the numbers are in the billions. How many? No one knows. That’s the problem in Germany, you have to reserve a certain amount of money, but how much?”

With both nuclear waste storage and decommissioning, governments and power companies around the world have often opted for halfway solutions, storing waste in temporary depots and partially decommissioning plants. Worldwide, 447 operational nuclear reactors exist and an additional 157 are in various stages of decommissioning. Just 17 have been fully decommissioned.

In Europe, a recent report by the European Union Commission estimated that funds set aside for waste storage and decommissioning of nuclear plants in the EU’s 16 nuclear nations have fallen short by $137 billion. Dealing with nuclear waste in the United Kingdom is also a highly charged issue. At one location — a former weapons-manufacturing, fuel-reprocessing, and decommissioning site called Sellafield — the expected cleanup cost increased from $59 billion in 2005 to $155 billion in 2015.

While Germany continues to expand solar and wind power, the government’s decision to phase out nuclear energy means it must now rely heavily on the dirtiest form of coal, lignite, to generate electricity. The result is that after two decades of progress, the country’s CO2 emissions are rising. READ MORE

In the United States, the Tennessee Valley Authority’s Watts Bar Unit 2 nuclear power plant went into operation in June, becoming the United States’ first new nuclear plant since 1996. “It’s a big step forward for clean energy, and we really have to be pushing that as hard as we can for the sake of the climate — all sources of clean energy, which includes nuclear,” MIT scientist Kerry Emanuel told the Washington Post.

Yet despite recently completing a new plant, the United States is also struggling with decommissioning. The cost estimates of shuttering U.S. nuclear plants increased fourfold between 1988 and 2013, according to Bloomberg News. Many governments are slowly starting to realize how much those costs have been underestimated.

As Antony Froggatt, a nuclear expert and researcher at Chatham House — a London-based think tank— put it, “The question is, how do you create a fair cost to cover what will happen far into the future?”

Correction, July 26, 2016: Due to an editing change, an earlier version of this article failed to mention that Kirsty Gogan, co-founder of Energy for Humanity, was a former spokesperson for the Nuclear Industry Association.