Despite the enormous promise of solar power, the drawbacks of the technology remain significant. People need electricity every day, around the clock, but there’s no part of the United States that is cloud-free 365 days a year — and no solar radiation at night. You have to find some way to store the energy for those sunless periods, and there’s not yet a large-scale way to do that.

Moreover, the best locations for solar arrays — the deserts of the American Southwest — are far from the centers of population, so even under the best of circumstances you’d have to send electricity many hundreds of miles through transmission lines that don’t yet exist.

But there is a way to tap into the sun’s energy 24 hours a day, every day of the year, and send it anywhere on the globe: Launch solar panels into space and beam the power back to Earth.

The concept sounds far-fetched and wildly impractical, and when the Pentagon and space enthusiasts began talking about it back in the 1960s and 1970s, it was. Recently, however, the idea of space-based solar power, or SBSP, has begun to look less like science fiction and more like a technology whose time may be coming, with the Pentagon and private companies ramping up efforts to make space-based solar power a reality. 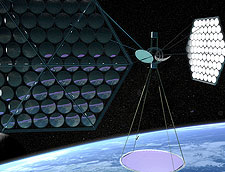 Â©Mafic Studios, Inc.
HOW IT WORKS: Beaming space-based solar power back to Earth

Two years ago, the Pentagon’s National Security Space Office (NSSO) issued a report recommending that the U.S. “begin a coordinated national program to develop SBSP.” A year ago, engineers did a small but successful experiment using some of the technology that will be employed in SBSP, taking energy from solar cells, converting it to microwaves, and then beaming it 92 miles from Maui to the Big Island of Hawaii, where it was converted back into 20 watts worth of electricity.

And last spring, the California-based Solaren Corporation signed a contract with Pacific Gas & Electric (PG&E) to provide 200 megawatts of power — about half the output of an average coal-fired power plant — by 2016 by launching solar arrays into space. Several other companies have announced their intentions to put up solar satellites of their own.

Doubts abound that space-based solar power will come to pass anytime soon, and for good reason: The technology involves launching a series of large satellites into space, using robotic technology to assemble the solar arrays, transmitting the energy 22,000 miles to earth using microwave technology, and then converting that energy to electricity on the ground.

The question is whether this engineering feat can be pulled off at a price competitive with terrestrial solar power.

The fact is, however, that all of that is now feasible — if pricey — thanks to technological advances in recent years. These include cheaper and more reliable launch technology, lighter and stronger materials for solar stations, significant improvements in the robotic technology needed to assemble the solar arrays, far more efficient solar cells, more precise digital devices to direct that energy accurately to earth, and significantly smaller and more powerful microwave transmitters and receivers.

The big question is whether this engineering feat can be pulled off at a price competitive with terrestrial solar power. So far, the Pentagon’s estimate of what it will cost — $10 billion to put a 10-megawatt experimental solar station in orbit by 2016 — is five times higher than Solaren’s and would produce far less power.

A number of factors are driving the renewed interest in space-based solar power, including the push to cut greenhouse-gas emissions and growing interest from the military. But neither of these forces would mean much if the technology was outrageously expensive or too impractical.

It was a little bit of both when SBSP was first proposed in 1968 by an engineer named Peter Glaser, who worked for the consulting firm Arthur D. Little on a variety of space-related projects. The basic components — solar cells and microwave transmitters and receivers — already existed, and as the Apollo program began to wind down, NASA was trying to figure out what to do next.

In particular, says John Mankins, who became the manager for advanced concepts for NASA during the 1990s, “They were trying to figure out what to do with the space shuttle.” One idea was to begin launching space habitats — to get large numbers of people living and working in space. “These people would need something to do,” says Mankins, “so one idea was that they’d build solar-power satellites.”

Studies showed that it was a feasible, but daunting, proposition. “This was in the days before PCs, microelectronics, robotics,” says Mankins. “The idea of something like the shuttle’s robotic arm was unimaginable. So you’d need these big crews to bolt the things together — and the satellites themselves would have had to be physically enormous. We’d need a new launch system that would dwarf the space shuttle.”

At 22,000 miles up, a geostationary satellite is in full sunlight virtually all the time.

The bottom line, he says, was that it could be done, but it would have cost the equivalent of a trillion of today’s dollars to get the first kilowatt of power, and it would have taken 20 years. “The National Research Council and the Office of Technology Assessment looked at it,” recalled Mankins. “One of them said, ‘Let’s revisit this in ten years.’ The other said, ‘Let’s never consider this again.’”

In the mid-1990s, NASA did revisit the concept. Under Mankins’ direction, a team of engineers was assembled to see whether advances in technology made space-based solar power more feasible. “The basic answer,” he says, “was ‘yes.’”

In the past decade two other factors have emerged to boost the prospects of SBSP: climate change and interest from the military.

There is a growing recognition that non-carbon energy sources will be crucial if the world is going to avoid the worst effects of climate change. It’s almost inevitable that carbon emissions will end up being taxed one way or another, and when they are, renewables like SBSP will immediately become more competitive economically.

That’s what motivates Solaren and PG&E. Although it is cloaking its work in secrecy, Solaren has said it will cost roughly $2 billion to launch a handful of satellites carrying the equipment that will be robotically assembled into a single, large solar station. One way the company plans to boost efficiency is to use parabolic reflectors to concentrate sunlight onto the solar cells.

“The biggest expense,” says Cal Boerman, Solaren’s director of energy services, “is the cost of getting into space, and we’re convinced we can get the weight down to the point where we can do this with a minimum number of launches.”

Solaren eventually wants to put in orbit satellites that can generate enough electricity for 1 million homes.

As with any SBSP system, the energy will be converted into microwaves and beamed down to a so-called rectenna — an antenna that “rectifies” the microwaves back into electricity. Solaren’s, to be located near Fresno, Calif., will consist of an array of smaller antennas that will cover about a square kilometer — far less real estate than you’d need if you were using ground-based solar cells to gather an equivalent amount of power.

Because Solaren’s satellite will be in geostationary orbit, the antennas won’t have to track it across the sky; like a satellite TV receiver, they’ll always aim at a fixed point in the sky. At 22,000 miles up, a geostationary satellite is in full sunlight virtually all the time.

As for safety, he says, the fact that the microwaves are spread out over a square kilometer means that they’d be relatively harmless to, say, a flock of birds that happened to fly through them. And if the beam should wander, the satellite will be programmed to scatter it.

Solaren isn’t the only company trying to commercialize SBSP: PowerSat, based in Everett, Wash., has recently filed patents for its own space-power system, which will use an array of hundreds of small satellites linked together rather than one large one. PowerSat says it can reduce some of the high costs of putting the technology in space by using solar energy to power electronic thrusters to maneuver the satellites into orbit. A Swiss company, Space Energy, is also working on SBSP. Solaren is the only one, though, with a contract with a utility. “As we talked to investors,” says Boerman, “they naturally asked, ‘Can you sell it?’”

If this first project works out, Solaren eventually wants to put in orbit satellites that can generate a gigawatt of electricity, enough to power roughly 1 million homes.

Such futuristic schemes have understandably generated a great deal of skepticism. Space experts have been debating the issue online, with some arguing that Solaren’s project will be far more expensive than the company estimates, in part because it could take more than a dozen launches — not just four, as the company stated — to get the solar station into space.

But the military’s interest in SBSP could give a major boost to the technology. According to Marine Corps Lt. Col. Paul Damphousse, Chief of Advanced Concepts for the National Security Space Office, the military is interested in SBSP for two main reasons.

By being an early customer, the government can rapidly accelerate development of the technology.

The first, he said, is that “we’re obviously interested in energy security, and we’re also interested in weaning ourselves off fossil fuels because climate change could pose national security risks.” But there would also be a tactical advantage to space-based solar, Damphousse noted. When the military is operating in remote regions of countries like Iraq or Afghanistan, it uses diesel generators to supply forward bases with power.

“We have a significant footprint getting energy in,” says Damphousse, noting the need for frequent convoys of oil tankers, the soldiers to protect them, and air support — all of which is expensive and dangerous.

Being able to tap into power beamed directly down from space would clearly have a lot of appeal, says Damphousse, even if it were relatively costly. And it’s not just useful for the battlefield, he says, but also for areas affected by natural disasters, such as Hurricane Katrina.

For those reasons, Damphousse supports the idea of coordinated studies by the Pentagon and other agencies — such as NASA and the Department of Energy — that would have a stake in space-based power.

“We might, for example, do some experiments on the International Space Station, which is already up there and generating 110 kilowatts of power from its own solar cells,” he says, “rather than having to send up a dedicated test satellite.”

Such cooperation might appeal to NASA. “I suspect that NASA will start working on energy and on more advanced technology and less on, ‘Let’s get to the moon by 2018,’” says Mankins.

By undertaking some of the research and being an early customer for SBSP, the government could rapidly accelerate development of the technology. Historians of aviation agree that the government’s decision to back air mail played a major role in developing the aircraft industry, leading to technological innovations and economies of scale. The same phenomenon could take an emerging but outlandish-sounding technology and push it into the energy mainstream.