The highlands of southwestern Ethiopia should be ideal for growing coffee. After all, this is the region where coffee first originated hundreds of years ago. But although coffee remains Ethiopia’s number one export, the nation’s coffee farmers have been struggling.

The Arabica coffee grown in Ethiopia and Latin America is an especially climate-sensitive crop. It requires just the right amount of rain and an average annual temperature between 64 degrees Fahrenheit and 70 degrees Fahrenheit to prosper. As temperatures rise — Ethiopia’s average low temperature has increased by about .66 degrees F every decade since 1951, according to the country’s National Meteorological Agency — and rains become more variable, Ethiopian coffee farmers have suffered increasingly poor yields. Last year was especially bad, with exports dropping by 33 percent. Some have moved their coffee trees to higher elevations, while others have been forced to switch to livestock and more heat-tolerant crops, such as enset, a starchy root vegetable similar to the plantain. 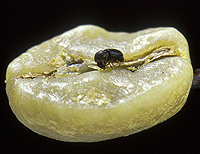 Now, there is evidence that a warming climate may be linked to one of the major threats facing the coffee industry in Ethiopia and elsewhere: A tiny insect known as the coffee berry borer beetle has been devastating coffee plants around the world, and new research suggests even slight temperature increases promote the spread of the pest.

The beetle is a relatively recent problem in Ethiopia and Latin America, where most Arabica coffee is grown. A field survey of Ethiopia’s coffee-growing regions conducted in the late 1960s found no trace of the beetle, but in 2003 researchers reported that the pest was widespread. Drought and heavy rains during harvest time may be the prevailing problems for coffee growers in Ethiopia and other countries; but the lack of an effective treatment for the coffee berry borer is cause for concern, especially given new research findings tying the spread of the beetle to rising temperatures.

Coffee may not be a basic food crop, such as wheat, but it is arguably one of the most important agricultural products. Valued as high as $90 billion a year, coffee, which is grown in more than 70 countries, is one of the most heavily traded commodities in terms of monetary value. Seventy percent of the world’s coffee comes from small, family-owned farms and more than 100 million people are dependent on the crop for their livelihood. Researchers estimate that the coffee berry borer causes more than $500 million in damages each year, making it the most costly pest affecting coffee today. Coffee growers have tried various tactics to stop the beetle, but to little avail. Pesticides don’t help, and even if they did, they are an unfavorable option, given their negative effects on coffee quality.

Since the 1980s, the beetle has spread to every coffee-growing region except Hawaii, Nepal, and Papua New Guinea.

Until recently, the coffee berry borer was confined to just a few regions in Central Africa. But since the 1980s, the beetle has gradually spread to every coffee-growing region except Hawaii, Nepal, and Papua New Guinea. Juliana Jaramillo, a biologist at Kenya’s International Center of Insect Physiology and Ecology, suspects temperature increases are to blame. She and her collaborators recently identified the temperature range in which the beetle can survive. They found that the average minimum temperature the borer requires to reproduce is about 68 degrees F, and the mountainous regions of Ethiopia did not reach that temperature until 1984.

The borer did not appear in Colombia, Jaramillo’s native country, until 1988, but it has since become a persistent problem. Twenty years ago, Colombia was the second-largest coffee exporter in the world, and regularly sent abroad more than 12 million bags of Arabica coffee each year. But production has not reached that level since 1994, and 2009 was the country’s worst year ever. At an International Coffee Organization meeting in February, a Colombian coffee representative revealed that the country’s coffee exports had dipped to 7.9 million bags last year and that infestation by the borer — along with excessive rainfall and reduced application of fertilizer — was partly to blame.

Eliminating the coffee berry borer has become Jaramillo’s mission. She grew up in the picturesque Caldas region — the heart of Colombia’s coffee country — and her family still maintains a small coffee farm there. “It’s really a personal problem for me,” she said.

For every 1.8 degree F increase, Colombian coffee growers will have to move up 550 feet in altitude.

After establishing the temperature limits of the borer, Jaramillo and her colleagues used climate data to estimate the number of reproductive cycles the beetle could complete annually in four coffee-growing regions. While Ethiopia was on the low end, with only one to two generations per year, Colombia was one of the highest, supporting up to 4.7 generations of the borer in one year. Jaramillo believes the discrepancy is largely due to Colombia’s year-long growing season. Coffee plants are most susceptible to pests when they’re flowering, so regions that receive rain all year, such as Colombia, are more vulnerable to the borer than those with distinct dry and rainy periods, such as Ethiopia and Kenya.

Female borers kill coffee plants by burrowing into coffee berries to lay their eggs. (Each female can lay up to 200.) The resulting damage attracts herbivores and pathogens. In Latin America, the pest is known simply as la broca, which means “the drill.”

In their research, Jaramillo and her collaborators found that for every 1.8 degrees F increase in temperature, the coffee berry borer became 8.5 percent more infectious on average. Not only did the female beetles lay more eggs at higher temperatures, but they also drilled deeper into coffee berries, causing more physical damage. A follow up study, published this year in the Journal of Economic Entomology, found that higher temperatures also caused the female beetles to travel from berry to berry earlier. 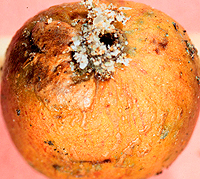 G. Mercadier
CLICK TO ENLARGE: A coffee berry destroyed by a borer

Even more troubling, Jaramillo’s data indicate that the beetle can survive in a dormant state in sub-tropical conditions. That means farmers will not be able to escape the pest by moving to higher altitudes. Indeed, researchers in Uganda and Indonesia have already started finding the borer as high as 6,115 feet above sea level; the beetle is typically only found at 4,000 to 5,000 feet above sea level.

“Coffee is migrating,” said Dean Cycon, owner of Dean’s Beans, a Massachusetts-based specialty coffee company that works with farmers around the world. “As it’s getting hotter at the lower altitudes, the lower plants are dying off, so it marches the coffee forest up the slopes.” Jaramillo’s research indicates that the borers are migrating with the coffee plants.

Jaramillo’s father, Alvaro Jaramillo — a climatologist at the National Coffee Research Center in Manizales, Colombia — has calculated that for every 1.8 degrees F increase in temperature, Colombian coffee growers will have to move their plants up about 550 feet in altitude to maintain current levels of quality and quantity.

Coffee growers need new strategies to combat threats such as the borer, and that requires research.

The coffee berry borer could also be more difficult to control at higher altitudes since moving a pest into a new ecosystem makes its behavior harder to predict. For example, insects that could serve as natural enemies to the coffee berry borer may not interact with the beetle in the same way at higher elevations. “Natural enemies can be very useful in pest control, but their cycle has to be in sync with the pest’s,” said Curtis Petzoldt, a researcher at Cornell University’s Integrated Pest Management Program.

Traditionally, the cooling effects of shade trees have provided some of the best protection from coffee pests, including the coffee berry borer. Studies have shown shade trees can reduce the temperature around coffee leaves by 3 degrees F to 7 degrees F, depending on the environment. There is also evidence that shade-grown coffee plants produce higher-quality coffee. But many coffee growers have cut down the trees around their coffee plants in order to increase sun access.

“There is a dogma that sun-grown coffee produces higher yields than shade-grown coffee,” explained Fernando Vega, a coffee researcher at the U.S. Department of Agriculture and Jaramillo’s main collaborator. And consistently dwindling supplies can make farmers desperate. “If you’re getting a lesser crop — and in many of the countries they are — there’s more fear that you have to grab every percentage you can,” said Cycon.

But shade trees can take years to grow, and while some coffee retailers, including Starbucks, have started promoting shade-grown coffee, it’s still the exception rather than the rule. The notion of sustainable growing practices has also become popular with coffee importers, but these forward-looking efforts, which focus largely on conserving water and reducing carbon emissions, do little to address the climate-related problems that coffee growers are now facing.

Coffee farmers need new strategies to combat threats such as the coffee berry borer, Jaramillo said, and that requires research. “I think the coffee industry has two options,” she said. “Either they start investing in climate research, or they educate the consumers to drink something else.”