From Shanghai to Sao Paulo, from Seoul to Tehran, conventional cars powered by conventional fuels are proliferating, intensifying economic, environmental, and energy stresses in the world’s fastest-growing metropolitan areas. Booming cities such as Bangkok and Moscow now have so many cars that their central thoroughfares look more like parking lots than streets. Unless we transform vehicles, fuels, and our concept of mobility, we will choke — literally and figuratively.

The globe now has more than 1 billion vehicles and is expected to hit the 2 billion mark within 20 years. And while the international economic crisis may have slowed things down momentarily, the desire for personal vehicles is powerful and the demand will not soon let up.

America pioneered the motorization of human society and leads the world in auto ownership today, with more than one auto for every licensed driver. But with vehicle growth rates over the past decade slowing to around 1 percent to 2 percent a year in the U.S., Western Europe, and Japan, most vehicle growth is now in emerging nations. As the world gets richer, private car use will zoom ahead, especially among the 2.4 billion citizens of China and India. Beijing alone now adds nearly 1,500 cars to its roads every day.

Automakers are increasingly focusing their efforts on these emerging markets, with their phenomenal growth potential. A mass migration to urban areas has been driving the demand for autos. Over the past decade, China has tripled its vehicle fleet to 45 million while India’s has doubled to 15 million. And these figures do not include tens of millions of motorcycles and small, rural vehicles in these nations. In January 2009, for the first time ever, more cars were reportedly sold in China than in the U.S.

In January, for the first time ever, more cars were sold in China than in the United States.

The question is, by 2020, how will the world’s growing mobility demands be met? If we remain wedded to conventional vehicles powered by conventional fuels, then we will be in a lot of trouble. Instead, we need long-overdue transportation innovations that will lead to cleaner, more efficient, safer vehicles running on greener fuels, together with an overhaul of public transportation systems and land-use development. Nowhere is this more urgent than in China.

Whichever countries bring these transportation innovations to the marketplace stand to gain economically and, politically, as champions of the public interest. Nations such as Japan, France, and the U.K and U.S. states such as California are taking the lead in terms of policy innovation, crafting laws that creatively deal with air quality, climate, and energy solutions. California enacted the first vehicle greenhouse gas emission standards that take into account the entire fuel cycle, from the wellhead to the wheel. France has bundled incentives and disincentives together to simultaneously reward, or penalize, consumers who buy lower, or higher, carbon-emitting cars. But it is China — with its limited oil resources, rapid development, and polluted cities — that may emerge as a leader. 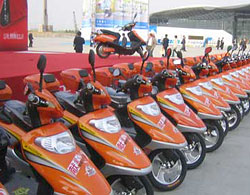 The popularity of electric two-wheelers in China may accelerate the growth of the electric-vehicle industry. UNIVERSITY OF CALIFORNIA, BERKELEY

This is because China is a hotbed of innovation, well positioned to respond to internal demands and international initiatives. Novel technologies are already sweeping China. Electric two-wheelers are the most successful mass-marketed battery-powered electric vehicles in the world, with sales exceeding 15 million in China in 2007. They have immediate air-quality benefits, set the stage for a shift toward cleaner three- and four-wheel electric vehicles, and accelerate the development of the low-cost battery sector. Chinese automakers are also innovating with new ferrous batteries that could be much cheaper than lithium-ion or nickel-metal hydride batteries and could be recharged in 10 minutes. This breakthrough would enable large-scale introduction of electric vehicles in China, ahead of Western Europe and the United States.

Low-carbon vehicle fuels from coal are another innovation China is working on, aided by international support for carbon capture and sequestration technologies. And bus rapid transit (BRT), where dedicated bus lanes carry almost as many passengers as a metro rail system at a fraction of the cost, are gaining widespread acceptance in Beijing, Shanghai and, other cities.

China’s government is also playing an increasingly supportive role in fostering innovation. It has imposed fuel economy standards on vehicles that are more aggressive than those in America and has adopted tough tailpipe standards that are closing the gap with the United States. Chinese leaders are adopting fiscal measures to shift taxes to favor more fuel-efficient cars.

These ideas are not entirely new. But what China can do, with its massive size and economy, is foster these ideas until they are fully developed and then launch them abroad.

It will take more than technological innovation, however, to transform transportation in China and the developing world. Sprawling land use and vehicle use must be managed and restrained. This will take government intervention, both through regulations and fiscal policies such as gas taxes and emissions fees. 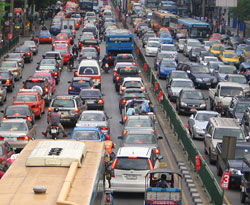 In China and elsewhere, cities are following different paths when dealing with the problems associated with a growing number of vehicles. In the name of congestion, safety, and even public image, certain cities — including Guangzhou, Hangzhou, and Shanghai — severely restrict or ban motorcycles, small rural vehicles, small cars, and even bicycles. Shanghai caps the number of new private car registrations annually, auctions auto registrations, limits parking, and makes it difficult to obtain a driver’s license. The city is considering a plan to charge cars for entering the central business district, as now exists in London. Shanghai’s more restrictive policies have led to a slower rate of car growth. With about the same population and wealth as Beijing, Shanghai residents own only one car for every six in Beijing.

Chinese mobility isn’t yet fixated on cars, except maybe in Beijing, where pro-car policies mean that new highways are built as quickly as old ones fill up. An enlightened car policy is key. Stronger metropolitan institutions such as regional planning commissions are needed to protect the environment, manage land development, and provide public transportation. China’s increasingly entrepreneurial culture must be allowed to leapfrog to new technologies that thrive at home and could be exported abroad, such as lightweight, plug-in hybrid vehicles, new electric-car infrastructure advances, and real-time, wireless travel information devices.

Will China actually play a leadership role in transforming vehicles, fuels, mobility, and land use? We think so, for a variety of reasons. For one, some in China are beginning to recognize the Faustian bargain of automotive industry success. They gain jobs, but suffer a raft of environmental, social, and even economic problems. China’s strong national and local governments could pave the way for precedent-setting fiscal and regulatory policies, such as emission-indexed vehicle user fees. The Chinese government is capable of strong and effective intervention, as demonstrated with its one-child policy. Imagine a similar policy applying to car ownership.

And then there are the Chinese people themselves. Despite sometimes harsh limits on personal freedom, they’re becoming more outspoken in demanding a cleaner environment. All of this could add up to positive results as consumers and governments pressure automakers, oil companies, and developers that seek to thrive in one of the world’s fastest-growing nations.

Yet China’s fate rests not only on well-orchestrated approaches within the country, but also on international policies aimed at China. As China speeds ahead, the rest of the world must help steer. Financial incentives, technical assistance, and political pressure from the United States and other nations are needed. For example, public-private investment funds targeted at clean transport technologies, multilateral government support to increase financing of sustainable transportation projects, and help developing zero-emission-vehicle policies could all spur China to pursue a more sustainable course. The most car-centric nations owe it to themselves to be involved as more than mere observers. It’s in their self-interest to enthusiastically and generously help China pursue a more benign transportation and energy path. When it comes to transportation, China’s missteps could be devastating, while its revolutionary innovations could be lifesaving for us all.

Following the U.S. down the wrong path toward fossil fuel-dependent motorization could be catastrophic.

This isn’t charity. While China would benefit from aid and partnerships, so would the rest of the world. There are other awakening giants in our midst. Vehicle ownership in India, Brazil, Russia, and many other countries is rising rapidly. China might offer them a global model to follow.

Instead of overlooking or decrying the growing demand for cars in China, India, and elsewhere, the U.S. needs to encourage innovative solutions. As the global economy rebounds, China is poised to regain its phenomenal growth in affluence and mobility. Following the U.S. down the wrong path toward fossil fuel-dependent motorization could be catastrophic. Charting another course could be immensely beneficial.

We all win if tomorrow’s vehicles, fuels, and land use are transformed according to a new vision, one that accommodates the desire for personal mobility but with a reduced environmental footprint. It’s a vision that accommodates two billion vehicles, but rejects a transportation monoculture that isn’t going to take us where we need to go.