From the street, Adobe Systems’ San Jose headquarters looks like any other collection of skyscrapers that dot the downtown of the self-proclaimed capital of Silicon Valley.

But ascend to a skyway that connects two of the software company’s towers and you’ll find a wind farm. Twenty vertical turbines that resemble a modern art installation slowly rotate in the breeze that blows through a six-floor plaza. Down in the parking garage, a dozen electric car-charging stations have been set up. Adobe, which makes the ubiquitous Flash player software, will install 18 more chargers this year to accommodate workers expected to be first in line when the Nissan Leaf, Chevrolet Volt, and other battery-powered vehicles roll into Silicon Valley showrooms later this year.

Adobe also plans to install fuel cells — possibly using carbon neutral biogas made from cow manure — to generate the three megawatts of electricity consumed by its downtown data centers. And since the company has limited roof space to install solar panels, it is considering joining a co-op that would purchase land outside the city for a solar farm, according to Randy Knox, senior director for global workplace solutions for Adobe.

“Once you’ve got your buildings running pretty energy efficient, you start to look at the source of your energy, and that’s where we are now,” says Knox, as the wind turbines slowly spin in the winter wind, generating about 24 kilowatts of electricity. “We’re a technology company and people have to step up and be early adopters in the green area or it won’t go anywhere.”

Silicon Valley companies have long gone green — racking up LEED points by installing everything from solar arrays to waterless urinals to demonstrate their environmental street cred to customers, shareholders,and their young, climate-change-aware workforces.

But for companies in the environmental vanguard, their corporate campuses are laboratories to test new technologies to cut their carbon footprints and improve the bottom line. As climate change legislation remains stalled in Congress, and California struggles through the regulatory complexities of implementing its own global warming law, much of the action has shifted to the private sector.

Case in point: The unveiling of Bloom Energy’s breakthrough fuel cell technology in February. (Fuel cells generate energy without combustion by turning hydrogen, natural gas, biogas or other fuels into electricity through an electrochemical process.)

“I’d love to see us have a whole data center running on this at some point when they’re ready,” Larry Page, Google’s co-founder, said at a press conference introducing the Bloom Energy Server. “Moving production of energy closer to where it’s used has a lot of environmental benefits and a lot of commercial benefits. It lets you choose your fuel source.” 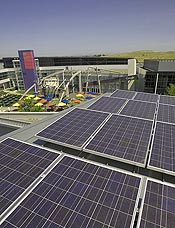 Google
In 2007, Google added a 1.6-megawatt solar array to the roofs of its Mountain View, Calif. headquarters.

The Bloom Energy Server’s ability to deliver electricity at prices competitive with traditional fossil fuels currently depends on significant state and federal subsidies. The long-term durability of the devices also remains to be proven. But the fact that some of the world’s largest corporations have embraced the Bloom Box could be the key to giving the company and its competitors the scale to drive down costs and continue innovating.

No surprise that the first Bloom Box — which sells for $700,000 to $800,000 — was secretly plugged in at the Googleplex more than a year ago and hidden behind a fence. Bloom kept the development of its energy server shielded from public view, and Google did not want it known that it would be the first to use the Bloom Box.

The search giant’s interest in green technologies is pragmatically experimental. Back in June 2007, Google flipped the switch on what was then the world’s largest corporate solar array, a 1.6-megawatt solar system that covered the roofs of its Mountain View, Calif., headquarters. When I climbed the roof to take a look a few months later, I remarked to a Google executive that the panels were covered in dust.

The dirt was deliberate, she said. Google didn’t just want to draw electricity from the panels, it wanted to test how they performed under different conditions, including how often they would need to be washed to maximize energy production.

Likewise, Google’s fleet of converted plug-in hybrid Toyota Priuses — the campus features some 100 charging stations — have been deployed as rolling laboratories for how electric cars perform.

While other Silicon Valley companies have moved to secure renewable sources of energy, Google has created, in effect, its own utility company, Google Energy, to procure electricity for its massive data centers and other facilities. On Feb. 18, the Federal Energy Regulatory Commission approved Google Energy’s request to become, as it stated in its license application, “a power marketer, purchasing electricity and reselling it to wholesale customers.” The company has said little about its plans for Google Energy. In it regulatory filings, Google stated that Google Energy “was formed to identify and develop opportunities to contain and manage the cost of energy for Google.”

Safeway, Wal-Mart, and scores of other big corporations have also been licensed to act as in-house utilities for their operations. But Google Energy has prompted much speculation about whether the company had greater ambitions in the energy field, given its big investments in solar power plant builders like BrightSource Energy and eSolar by Google.org, its philanthropic arm. It’s all part of Google.org’s ambition to make renewable energy competitive with coal.

“We’re looking to make investments in clean energy projects and to procure green energy,” Dan Reicher, Google.org director of climate change and energy programs, told me recently as Googlers bicycled by a conference room at the Googleplex, while other employees drove plug-in hybrid Priuses into solar panel-covered carports.

Reicher said that one way to do that would be as an equity investment in a generating plant somewhere. Another, he noted, is to become a big buyer of green electricity, especially for Google data centers around the U.S. “This interest in procuring green electrons is part of what’s driven Google Energy,” said Reicher.

Thus one could imagine a scenario where Google.org or Google Venture, its venture capital subsidiary, buys a solar power plant and signs a deal with Google Energy to supply the electricity to Google data centers and sell any surplus to other buyers, as is permitted by its government license.

Though not as large as Google, other Silicon Valley companies are moving quickly to adopt renewable sources of energy. Applied Materials, which makes solar cell manufacturing equipment, installed a massive solar array at its Silicon Valley headquarters, while Yahoo for years operated a biodiesel-powered shuttle bus for its employees. Some Silicon Valley companies have offered workers subsidies for the purchase of Toyota Priuses and other hybrid cars.

At eBay’s sprawling San Jose headquarters, five Bloom Energy Servers sit outside a LEED Gold certified building. The Bloom Boxes are providing about 15 percent of the eBay campus’ electricity, or about five times as much energy as generated by its 3,248 solar panels, according to Amy Skoczlas Cole, director of the company’s Green Team.

And since the Bloom Energy Servers operate off the grid and supply electricity directly to the eBay campus, they reduce the load on the regional transmission system. (The energy servers presently run on natural gas, but eBay is working on a deal to purchase biogas generated from cow manure.) Install enough Bloom Boxes and utilities could forgo building expensive and polluting power plants that they fire up when demand spikes on a hot day when everyone runs their air conditioners. Such “peaker” plants usually sit idle but for a couple days of the year, utility executives say.

EBay’s LEED building sports the de rigueur green bells and whistles, such as recycled materials and energy efficient lighting. But it’s the “bioswale” adjacent to the Bloom Boxes that is one of the most notable features. Designed to filter rainwater runoff from the buildings and reduce the burden on the public sewage system, the bioswale resembles a wide sloping culvert where native grasses and layers of dirt and sand enable rain to percolate into the ground.

Skoczlas Cole says innovations such as the Bloom Energy Servers and the bioswale fit the “disruptive DNA” of Silicon Valley companies like eBay’s, which are interested in embracing cutting-edge technology that offers big potential payoffs.

“This new disruptive technology made sense because the economics made sense, frankly,” she says, noting that state and federal incentives mean that eBay’s multi million-dollar investment in Bloom Boxes is expected to pay for itself in three years.

And that may be the greenest innovation of all to come out of Silicon Valley companies’ embrace of cutting-edge green technology.