It’s hard to believe now, as oil from the wrecked Deepwater Horizon well encroaches on the Louisiana marshes. But it was only six weeks ago that President Obama announced a major push to expand offshore oil and gas drilling. Obama’s commitment to lift a moratorium on offshore drilling reflected the widely-held belief that offshore oil operations, once perceived as dirty and dangerous, were now so safe and technologically advanced that the risks of a major disaster were infinitesimal, and managing them a matter of technocratic skill.

But in the space of two weeks, both the politics and the practice of offshore drilling have been turned upside down. Today, the notion that offshore drilling is safe seems absurd. The Gulf spill harks back to drilling disasters from decades past — including one off the coast of Santa Barbara, Calif. in 1969 that dumped three million gallons into coastal waters and led to the current moratorium. The Deepwater Horizon disaster is a classic “low probability, high impact event” — the kind we’ve seen more than our share of recently, including space shuttle disasters, 9/11, and Hurricane Katrina. And if there’s a single lesson from those disparate catastrophes, it’s that pre-disaster assumptions tend to be dramatically off-base, and the worst-case scenarios downplayed or ignored. The Gulf spill is no exception. 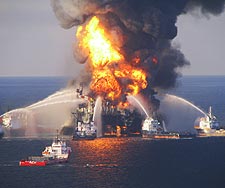 The post-mortems are only beginning, so the precise causes of the initial explosion on the drilling platform and the failure of a “blowout preventer” to deploy on the sea floor probably won’t be established for weeks or months. But the outlines of serious systemic problems have already emerged, indicating just how illusory the notion of risk-free drilling really was, while pointing to some possible areas for reform. These blunders include weak government oversight of the complex technical challenge of drilling deep wells many miles under the ocean surface and BP’s failure to evaluate — or even consider — worst-case scenarios.

A “blowout” on an oil rig occurs when some combination of pressurized natural gas, oil, mud, and water escapes from a well, shoots up the drill pipe to the surface, expands and ignites. Wells are equipped with structures called blowout preventers that sit on the wellhead and are supposed to shut off that flow and tamp the well. Deepwater Horizon’s blowout preventer failed. Two switches — one manual and an automatic backup — failed to start it.

When such catastrophic mechanical failures happen, they’re almost always traced to flaws in the broader system: the workers on the platform, the corporate hierarchies they work for, and the government bureaucracies that oversee what they do. For instance, a study of 600 major equipment failures in offshore drilling structures done by Robert Bea, an engineering professor at the University of California, Berkeley, found that 80 percent were due to “human and organizational factors,” and 50 percent of those due to flaws in the engineering design of equipment or processes.

Bea has worked as an engineer on offshore drilling operations and was also one of the leaders of an independent engineering study of the New Orleans levee failures during Hurricane Katrina. And the Gulf spill has some similarities to the 2005 flood, which was caused in large part by faulty floodwalls approved by the Army Corps of Engineers. The common threads between Katrina and the current oil spill, Bea wrote in an email, are “hubris, arrogance, ignorance… combined with a natural hazard.”

‘We’ve pushed it to the bloody edge in this very, very unforgiving environment.’

With near-shore and shallow reserves of fossil fuels largely depleted, drilling has moved farther offshore, into deeper waters and deeper underground. The technology for locating oil and gas reserves and for drilling has improved, but the conditions are extreme and the challenges more formidable. “This is a pretty frigging complex system,” Bea said in an interview. “You’ve got equipment and steel strung out over a long piece of geography starting at surface and terminating at 18,000 feet below the sea floor. So it has many potential weak points. Just as Katrina’s storm surge found weaknesses in those piles of dirt — the levees — gas likes to find weakness in anything we connect to that source.”

He questions whether energy companies and government agencies have fully adapted to the new realities. “The danger has escalated exponentially,” he said. “We’ve pushed it to the bloody edge in this very, very unforgiving environment, and we don’t have a lot of experience.”

Finally, there’s a problem with fragmentation of responsibility: Deepwater Horizon was BP’s operation. But BP leased the platform from Transocean, and Halliburton was doing the deepwater work when the blowout occurred. “Each of these organizations has fundamentally different goals,” Bea said. “BP wants access to hydrocarbon resources that feed their refinery and distribution network. Halliburton provides oil field services. Transocean drives drill rigs, kind of like taxicabs. Each has different operating processes.”

Andrew Hopkins, a sociology professor at the Australian National University and an expert on industrial accidents, wrote a book called Failure to Learn about a massive explosion at a BP refinery in Texas City in 2005 that killed 15 people. He says that disaster has several possible insights for the oil spill: one was that BP and other corporations sometimes marginalize their health, safety, and environmental departments. “The crucial voice for safety in Texas City was shielded from the site manager, and the very senior agency people in the BP corporate head office in London had no role in ensuring safety at the site level,” he said. “The organizational structures disempowered the voices for safety and I think you’ve got the same thing here” in the Gulf spill.

But the more profound problem is a failure to put risks in perspective. BP and other companies tend to measure safety and environmental compliance on a day-to-day, checklist basis, to the point of basing executive bonuses on those metrics. But even if worker accident rates fall to zero, that may reveal nothing about the risk of a major disaster. “These things we are talking about are risks that won’t show up this year, next year — it may be 10 years down the road before you see one of these big blowouts or refinery accidents,” Hopkins said. “This same thing happened in the global financial crisis. Bankers were paid big bonuses for risks taken this year or next year, but the real risks came home to roost years later.”

That assumption — that catastrophic risks were so unlikely they were unworthy of serious attention — appears to have driven a lot of the government decision-making on drilling as well. The Minerals Management Service, a division of the Interior Department, oversees drilling on the Outer Continental Shelf. Since the 1980s, the MMS has routinely granted a blanket exemption from doing a comprehensive environmental impact statement to individual drilling operations, according to Holly Doremus, a professor of environmental law at Berkeley. The Washington Post and the Associated Press reported last week that BP’s Deepwater Horizon lease received that exemption (called a “categorical exclusion”) last year. It was based on several analyses that downplayed the risks of a major oil spill. One, published in 2007, estimated the “most likely size” of an offshore spill at 4,600 barrels. NOAA’s current, conservative estimate of the Gulf spill put its total at more than 80,000 barrels, increasing at a rate of 5,000 per day.

Energy companies have aggressively lobbied to avoid formally analyzing worst-case scenarios since the Carter administration first required them in instances where there was uncertainty about the risk of disaster.

“They thought it would lead to irrational public resistance to projects,” Doremus said. “But to me this Deepwater Horizon thing is an example where a worst-case analysis would have been useful. If they had done a worst case analysis they’d have to consider, well, ‘What if our blowout preventer didn’t work? And what if it happened during a bout of bad weather when the spill might reach the shore?’” Instead, BP officials admitted they were stunned by the disaster, and they and the government have largely improvised their response.

The evidence shows MMS has not taken an aggressive stance policing offshore drilling. Based on experience with malfunctioning blowout preventers, for instance, the MMS did suggest that energy companies install backup devices for triggering them. But it was only a suggestion, not a requirement, and U.S. drilling operators have declined to do so.

MMS has also been plagued by scandals in recent years, including one in which eight employees were disciplined for partying, having sex with, and receiving expensive gifts from their energy industry counterparts. Critics question whether the agency possesses the independence or the power to effectively tackle these issues post-spill. One sign of trouble: The MMS is a major player in investigating the spill and in the Outer Continental Shelf Oversight Board set up by Interior Secretary Ken Salazar to examine the broader safety issues the accident raises.

“MMS is the regulator, and regulatory failure is a part of this,” Hopkins said. “It’s going to be investigating itself. It’s totally inappropriate.”