The name is derived from “happy prospect” in Afrikaans, and once upon a time, life and the gold haul were both good at the Blyvooruitzicht Gold Mine, 50 miles west of Johannesburg. But two years after the mine’s owners abandoned it because it was unprofitable, sewage runs in the streets of the old mining village, tailings impoundments cover nearby towns in dust, and illegal miners rule the abandoned shafts.

“I’m just going to take one or two potshots at them to keep them at a distance,” says Louis Nel, head of security at the now-abandoned Blyvooruitzicht. He raises his shotgun and shatters the afternoon calm with several blasts. A few zama zamas — illegal miners whose title means “We try! We try!” in Zulu — run for cover. 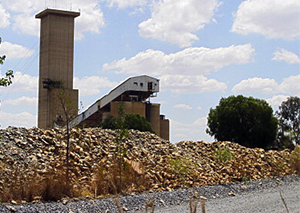 Mining waste piles from the closed Blyvooruitzicht gold mine line a roadside in South Africa. DEAN HUTTON/BLOOMBERG VIA GETTY IMAGES

Blyvooruitzicht is but one of thousands of abandoned mines scattered across South Africa, many from the gold industry. With recently shuttered mines adding to the massive impact of those left derelict years ago, the country faces a growing environmental, health, and social crisis created by a withering gold industry and inadequate oversight.

South Africa’s Department of Mineral Resources, or DMR, holds a list of 6,000 “derelict and ownerless” mines, which became the government’s problem over the years when the former owners disappeared. While the DMR slowly rehabilitates those mines— at a rate of about 10 per year — companies continue to walk away from operations such as Blyvooruitzicht, and both mining companies and the government are slow to accept responsibility.

In the meantime, millions of South Africans live around waste facilities and many deal with respiratory, skin, and other health effects that they blame on the mine waste piled in and around their communities.

The former apartheid government placed many settlements near or even on top of the mining waste dumps.

In 2013, mining companies produced 562,000 times as much waste as gold, according to the South African Chamber of Mines. A decade before, that same ratio was less than half as large, at 212,000 to 1. Mining operations are generating increased waste because South Africa’s gold is running out, and the remaining resource can only be found several miles below ground. This produces more waste, and leads to higher production costs, more mining debris, and increased acid mine drainage. South African companies now dig up waste weighing more than 15 million pounds — heavier than 38 Boeing 747s — in order to process one standard gold bar’s worth of final product.

Around Johannesburg, some 270 tailings piles, most of them unlined, contain that waste, which weighs in at an estimated 6 billion metric tons. According to the Department of Agriculture and Rural Development in Gauteng, the province that includes Johannesburg and Pretoria, toxic and radioactive mine residue areas cover 124 square miles.

“You don’t want big sinkholes, you don’t want underground fires burning forever, you don’t want kids falling down shafts,” says Caroline Digby, director of the University of the Witwatersrand’s Center for Sustainability in Mining and Industry. “All these things happen all the time because sites are not properly closed.”

In the Johannesburg area, with 10 million residents, at least 15 percent of the population lives in informal settlements, with many placed by the former apartheid government near or even on top of these dumps. At Blyvooruitzicht, about 11,000 people live around the abandoned mine, many of them unemployed miners unable to afford housing elsewhere.

Throughout its lifetime, the mine generated about 2.5 million pounds of gold, silver, uranium, and other minerals, but now it is a volatile wasteland. Just outside the main mining village, unremediated tailings piles stretch like monstrous sandy beaches. Children are known to swim in puddles of water on the dumps. Residents live in constant fear of electricity and water shutoffs, and illegal miners frequently engage mine security in gun battles.

Sikeme Lekhooana, chairman of the Blyvoor Community Committee, says his 5-year-old son knows the sound of gunfire all too well. “My little boy will tell you, ‘Papa, that is a gunshot outside,’” he says.

Blyvooruitzicht operated from 1937 until 2013, when a slumping market and labor disputes forced it into liquidation 14 years ahead of schedule. Two companies — DRDGOLD and Village Main Reef — worked the mine toward the end of its life. But each company has since walked away, claiming the other is the owner and therefore responsible for the cleanup.

One of the major environmental and health concerns is the vast production of acid mine drainage.

Lekhooana worked at the mine for 32 years before being laid off when the operation was liquidated. More than 1,000 employees from the mine now face the same situation, unable to find work in a shrinking industry.

As of 2007, the owners of Blyvooruitzicht had set aside a fund of around $1,000 to clean up the large amounts of mine waste. That fund has since been increased to around $3 million, but DRDGOLD says the true cost to rehabilitate would be at least three times that.

Says Nikisi Lesufi, the senior executive for health and environment for the Chamber of Mines, “There’s always a shortfall.”

Even when mines are operational, the DMR and other agencies do not properly address environmental consequences. Between November 2007 and February 2008, for example, thousands of metric tons of tailings pond material spilled from Blyvooruitzicht on four occasions, some of the waste washing into a nearby residential area.

These spills occurred with relative frequency, and while mine reports from the time noted crews being sent to clean roads and calls being made to the proper authorities, they do not mention any other measures taken to protect the community.

One of the major environmental and health concerns is the vast production of acid mine drainage, especially around Johannesburg, which the water department estimates at up to 92 million gallons per day. Acid mine drainage mobilizes heavy metals in the environment, creates sinkholes, and pollutes water supplies.

The Council for Scientific and Industrial Research estimated that as early as 2000, up to 20 percent of the stream flow around Johannesburg came from groundwater that was polluted, in part, by mines. Yet as of last year, at least 39 mining companies were operating without a water license, the South African Human Rights Commission found.

And the air is no cleaner. The district just west of the city recorded 42.24 metric tons of tailings-piles dust blowing into the air daily, some of it taken up by livestock and food crops.

Residents say that these piles cause health problems ranging from rashes to asthma to cancer. The list goes on, but a lack of local epidemiological studies has made it nearly impossible for communities near mine dumps to pursue litigation against mining companies.

Tudor Shaft is one such community, an informal settlement sitting atop a partially removed tailings facility just west of Johannesburg. An estimated 1,800 people live in shacks built on the radioactive and toxic soil. An orange hill of mine residue marks the center of the community, and sludge washes through the settlement when it rains.

Heavy metals and other pollutants in mine waste pose the most immediate threat to human health, but experts say consistent exposure to large amounts of low-level radiation might have long-term effects, too.

“When you’re already in a stress-burdened community that’s exposed to a variety of environmental pollutants, even low radiation levels that might not be toxic to very healthy individuals might have a significant impact on people,” says André Swart, executive dean of the University of Johannesburg’s Faculty of Health Sciences.

Some Tudor Shaft residents mix the soil with lotion and apply it to their faces as a skin cream. Some are baptized in polluted streams, and others — often pregnant women — follow a traditional practice in which they eat cakes made from the toxic dirt.

“You can either inhale [pollutants], ingest it, or absorb it through the skin, so they’re actually exposing themselves to all three of those root-ways of the pollution,” says Swart. “As this accumulates, the exposure level gets higher and higher and there can be real health issues.”

Reports show only about 10 mines rehabilitated annually over the past five years.

Proper mitigation has the potential to reduce health risks, but current mining closure legislation only came into effect between the 1970s and 1990s so governments are playing catch-up, according to Digby.

“Prior to that, mine owners thought about mining and then closing the gate, locking the key, and throwing the key away,” says Digby. “So we have this huge legacy in all mining regions.”

The DMR aims to rehabilitate 50 mines per year in the future and claims to have reached that number this year, but reports show only about 10 mines rehabilitated annually over the past five years. Proper rehabilitation includes sealing shafts to prevent entry, vegetating waste dumps or covering them in nets to prevent dust polluting the air, and using linings or trenches to keep contaminated water from seeping into aquifers, creeks, and rivers.

Statistics from the Chamber of Mines highlight a failing industry, which has been squeezed in recent years by declining gold prices, labor disputes, government interference, and increasing costs associated with having to drill more deeply to find rich lodes. The amount of gold produced in the country decreased from 395 metric tons in 2002 to 168 metric tons last year. The grade of ore mined has fallen every year since 2005.

“The last man standing is not able to take the responsibilities of all these guys who are gone,” Lesufi says. “They may well have good plans, good procedures, but by the time the mine closes, the revenue stream is a trickle.”

The gold sector has a few properly managed sites, with vegetation planted on the tailings piles to suppress dust, fences and signs erected to warn the public away, and linings built under waste dumps to prevent seepage.

High-altitude neotropical ecosystems known as pÃ¡ramos are increasingly at risk in Colombia and elsewhere in South America as major mining companies seek to exploit rich deposits of gold and other minerals. Such projects, scientists warn, could have serious impacts on critical water supplies.READ MORE

But the vast majority of mines and waste sites are not properly closed and rehabilitated, and when asked how specifically the $3 billion in financial provisions allocated for mine rehabilitation was being used, the DMR would not answer. The system of regulations governing mine closure is set to receive an overhaul that experts say could help reduce pollution problems. For example, late last year, the power to write most of the rules around closure shifted from the DMR to the Department of Environmental Affairs.

Urban planners, though, argue that it will take more than money and politics to properly remediate the hundreds of pale yellow dumps dotting the landscape. Tahira Toffa — an urban designer at Iyer Urban Design Studio working on Johannesburg’s Mining Belt Strategic Area Framework — agrees, explaining that an interdisciplinary network must work to address the future of abandoned mine sites.

“Most mining belts of this scale are peripheral, whereas this mining belt is located so strategically — it’s the center of the city,” she explains.

Numerous plans exist to productively integrate the city with its mining past, from converting tailings piles into solar farms to developing a new economic district on rehabilitated mine land. According to Toffa, who calls these tailings piles “our mountains and our beach,” Johannesburg’s population must first realize that mine dumps will not disappear and, if properly cleaned up, can instead be converted to other uses.

“[Mine waste is] such a critical part of our history and the identity of Johannesburg, and people are almost desensitized to both the negative and the potential positive impacts,” she says.