Consider the African rain dance. People in tribal costumes stamping the ground to make rain — it’s nonsense, you might say. Except that we now know it could actually work. If you have enough dancers, there may be no better way to make rain, because bugs in the soil and surface vegetation make exceptionally good cloud- and ice-condensation nuclei — and rain dances stir them up.

Microbes, it turns out, are the hidden players in the atmosphere, making clouds, causing rain, spreading diseases between continents, and maybe even changing climates as well. Eos, published by the American Geophysical Union, last month reported that bio-aerosols are “leading the high life.” In the Eos article, David Smith of the University of Washington and colleagues argue that microbes are “the most successful types of life on Earth” and are the unacknowledged players in many planetary processes, particularly in the atmosphere. It’s time we caught up with them.

Back in 1979, Russell Schnell of the University of Colorado was in western Kenya wondering why the tea plantations there held the world record for hailstorms. They occurred 132 days a year. He discovered that tiny particles of dead and decaying leaves in the soil bore a close resemblance to the tiny particles around which hailstones formed. They were, it turned out, far better adapted to the task even than man-made cloud seeding chemicals like silver iodide.

‘Bioprecipitation’ is a hot topic, more so as we learn how much biological matter is in the atmosphere.

Schnell, who is now deputy director of the Global Monitoring Division of the National Oceanic and Atmospheric Administration, concluded that “the feet of hundreds of tea pickers going about their daily jobs” were to blame for the hail. By kicking the bits of leaf into the air, he said, the tea pickers must be providing the abundant ice-nucleators that created the hailstorms. He published in Tellus in 1982, revealing that the critical actors in this Kenyan drama were the bacteria, Pseudomonas syringae, that attachedthemselves to the leaves as they rotted — the tea pickers sent the leaf bits airborne as they walked the fields picking the tea leaves from the bushes.

Biologists have long known that many species of bacteria trigger frost damage on vegetation, with Pseudomonas syringae the most efficient. The bacteria have evolved a gene that promotes spontaneous ice nucleation at around minus 2 degrees Celsius, much warmer than would happen otherwise. Their ice-making skills allow them to break down the cell walls of the plants they feed on. But it seems they also use the same skill in clouds.

Mineral and salt particles are present in large numbers in clouds and can act as condensation nuclei. But many bacteria, as well as fungal spores and tiny algae, are the cloud condensation nuclei of choice because they can work at higher temperatures. Since the formation of ice is normally the first step in the creation of raindrops in clouds, they are probably critical in the creation of rain. “Numerous studies,” say Smith and his colleagues in Eos, “have shown that many… condensation nuclei responsible for climate and precipitation patterns are in fact airborne micro-organisms, living or dead.”

And that, Smith says, means any human activity that puts more bugs in the air is potentially a rain-making activity, whether it is tramping tea plantations or cooking up a big rain dance. “Exactly how higher concentrations of airborne micro-organisms will interact with other variables that drive weather and precipitation is a major unknown in the climate change equation,” he says.

Schnell’s original observation was largely ignored by the wider science community. But recent papers have made similar observations in other places. For instance, Brent Christner, a microbiologist at Louisiana State University, reported in Science in 2008 that he had found “ubiquitous and abundant” microbes in fresh snowfall sampled from Antarctica to Montana — between 70 and 100 percent of ice nucleators found in the snow were biological. 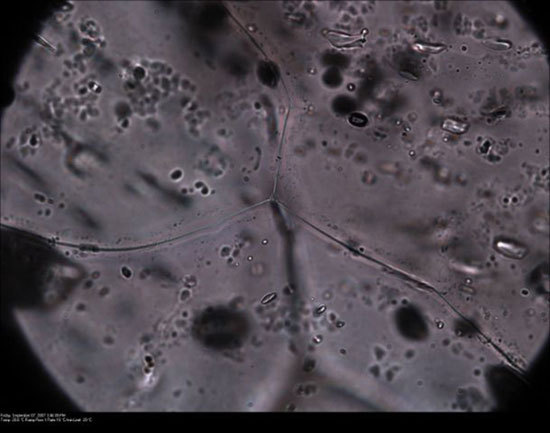 This, Christner points out, was especially remarkable since he was sampling snow in areas where there was no local vegetation. The microbes had traveled a long way to do their job. “It’s a wake-up call,” he says. “Biological particles do seem to play a very important role in generating snowfall and rain.”

Then in May this year, at a meeting of the American Society of Microbiology, Alexander Michaud of Montana State University in Bozeman reported finding high concentrations of bacteria in hailstones falling on his campus.

“Bioprecipitation” is a hot topic. And the more so as we learn how much biological matter there is in the atmosphere — more than 10,000 individual bacteria per cubic meter of air over the land, according to a 2009 study by Susannah Burrows of the Max Planck Institute for Chemistry in Mainz, Germany. These bacteria spend an average of about a week in the atmosphere; but while some stay close to the ground, others soar into the stratosphere, says Smith. Weather balloons have even found them in the mesosphere, up to 77 kilometers aloft, according to a forgotten study by Soviet scientist A. A. Imshenetsky, published in Applied and Environmental Biology as long ago as 1978 and uncovered by Smith.

This, says Dale Griffin of the U.S. Geological Survey in Tallahassee, Florida raises another interesting possibility. “Does the Earth shed microbial life into space, and how would this impact on our quest for extraterrestrial life? There are all kinds of interesting questions in this field, and very few people dabbling in it.”

We are constantly being rained on by bio-detritus from around the world, from dandruff and algae to pollen and fungi.

Discovering how long they stay up is difficult. But a study after the eruption of Mount Pinatubo in 1991 found micron-size particles — a reasonable proxy for bacteria — still falling to Earth five years later. Certainly, the dispersal is global.

Is there a permanent stratospheric ecosystem with bacteria, fungal spores, and viruses spending their entire lives in the clouds and reproducing? “I think we can talk about an atmospheric ecosystem,” says Griffin. “It is of course more fluid than what we classically call an ecosystem, but there is life, and it is plentiful.”

Other parts of the planet once thought devoid of life — such as Antarctic ice, deep oceans and deep rock formations — turn out to contain living organisms. “So,” asks Griffin, “why not the stratosphere?”

We are constantly being rained on by bio-detritus from around the world — from dandruff and algae to pollen and fungi, bacteria, and viruses. Ruprecht Jaenicke of the Institute of Atmospheric Physics at the University of Mainz in Germany analyzed air samples from remote regions. He concluded in Science in 2005 that as much as a quarter of the aerosols in the atmosphere are of biological rather than geological origin.

Some bugs bring diseases, of course. Gene Shinn of the U.S. Geological Survey in St. Petersburg, Florida first reported in 1999 that outbreaks of major coral diseases afflicting the Caribbean coincided with dust storms. One culprit was a soil fungus called Aspergillus sydowii that killed most of the region’s sea fans, a form of soft coral.

The pathogens — Shinn found 130 species in all — mostly showed up when the wind was from the east, bringing Sahara sand across the Atlantic. Roughly a billion tons of African dust settles on the Caribbean some years. The fungus that kills sea fans first arrived in 1983, when an intense drought in the Sahara sent dust clouds billowing across the Atlantic.

Air sampled in 2006 over San Antonio and Austin in Texas yielded 1,800 types of bacteria.

So desertification on one continent can kill coral reefs on another. Presumably dust storms crossing the Pacific from China’s Gobi desert will also be carrying pathogens. Griffin thinks it possible that soybean rusts from the west coast of Africa may also have crossed the Atlantic and infected soybean plants in the Americas. There could be other undiscovered environmental consequences as well.

But many of the particles in atmospheric aerosols are bugs. Air sampled during 17 weeks in 2006 over San Antonio and Austin in Texas yielded 1,800 different types of bacteria. Many may have been locally generated, but not all, according to Gary Andersen, of the Earth Sciences Division at Lawrence Berkeley National Laboratory, who analyzed the air.

His study was commissioned by the Department of Homeland Security as part of its research into possible bioterrorism. “We want to determine the background levels of airborne pathogens and other microbes because only very limited work has been conducted on cataloguing organisms in the air,” Andersen says. “This work underscores how much we don’t know about airborne bacterial populations, or where the bacteria come from.”

The potential for bioterrorism from airborne bacteria is certainly there. The Aspergillus fungus also causes lung disease in humans and has been implicated in asthma outbreaks. Influenza viruses have been tracked traveling by air from mainland China to Taiwan. Griffin says that a major outbreak of foot and mouth disease, the virulent cattle infection, may have reached England in 2001 in airborne dust. There was never any proof, but Griffin said at the time: “Satellite images show a dust cloud moving over the Atlantic and reaching Britain on 13 February. One week later, foot and mouth broke out in the UK. Given that the disease’s incubation period is seven days, that is one heck of a coincidence.”

It’s not so far-fetched. We know that marine algae generate millions of tons of a gas called dimethyl sulphide that converts in the atmosphere into aerosols of sulphuric acid. These in turn form condensation nuclei that may be major causes of cloud formation in remote ocean regions. Some researchers who follow the Gaian theorist James Lovelock have argued that may be a mechanism for controlling planetary temperatures. Researchers such as the University of East Anglia’s Tim Lenton suggest that bugs in the air could be performing a similar role.

But whatever view you take of Gaia, microbes certainly make up a substantial part of the atmospheric aerosol that may be slowing global warming. And since much of the atmospheric bio-aerosol can absorb moisture and nucleate ice and water droplets, they will be making clouds and rain, too.

If, as seems likely, humans are making the atmosphere more dusty — through industrial emissions, deforestation, plowing, and desertification — and are adding large amounts of bio-aerosols into the mix, then this may be another means by which we are changing our atmosphere — and even our climate. We are, it seems, conducting our own impromptu rain dance.