If you are a resident of the East Coast of the United States or of Western Europe, when did you last attend a shad bake, eat an eel, or watch Atlantic salmon vault a waterfall? Community shad bakes once celebrated the return of American shad to rivers as a marker of spring. Recently though, a dearth of shad led to a “shadless shad bake” on the Hudson — a river that in its glory days supplied more than four million pounds of shad in one season. Eels were widely consumed by Europeans and Americans in the 1800s and were often featured on holiday tables. And salmon once ran inland in countless numbers, providing sport and food; today, only a few hundred wild salmon remain in the eastern U.S., migrating up a handful of rivers in Maine to spawn.

Today, most people in the U.S. and Europe are scarcely aware that eels, wild Atlantic salmon, shad, and alewives — once-vital sources of food and employment — are no longer a part of their ordinary experience. This decline in importance is a manifestation of a loss of standing in society for these fishes, part of a larger phenomenon involving a regrettable interplay between ecology and the social order.

Every generation takes the natural environment it encounters during childhood as the norm against which it measures environmental decline later in life. With each ensuing generation, environmental degradation generally increases, but each generation takes that degraded condition as the new normal. Scientists call this phenomenon “shifting baselines” or “inter-generational amnesia,” and it is part of a larger and more nebulous reality — the insidious ebbing of the ecological and social relevancy of declining and disappearing species.

As species disappear, they lose relevance to a society and a constituency to champion their revival.

My colleague, Karin E. Limburg, and I have come up with another term for the broader context of this phenomenon: “eco-social anomie.” Anomie is defined as a state or condition of individuals or society characterized by a breakdown of social priorities and values. Eco-social anomie describes a biological and culturalfeedback loop that spirals toward this breakdown: As species disappear, they lose both relevance to a society and the constituency to champion their revival, further hastening their decline. A vivid example of this was highlighted in a recent study in Conservation Biology, in which researchers found that younger residents along China’s Yangtze River knew little or nothing of the river dolphin, the bajii — now believed to be extinct — and the threatened paddlefish.

“Our data from the Yangtze shows that, in certain cultural environments at least, local communities will immediately start to forget about the existence of even large, charismatic species as soon as these species stop being encountered on a fairly regular basis,” said Samuel Turvey, lead author of the study.

In the case of migratory fish, their once-vital niche in society is often reduced to vestigial place names, such as the Sturgeon Pool in the Hudson watershed in New York and the Salmon Kill on the Housatonic in Connecticut, which today offer local color — but no eponymous fish. Numerous measures show that the two-dozen migratory fishes of both shores of the North Atlantic have seen profound reduction. An historical review that I conducted with Limburg, of the State University of New York — College of Environmental Science and Forestry, on the sturgeons, salmon, shads, eels and other fishes that migrate between fresh and salt waters revealed deeply alarming statistics. Of 35 studies of the long-term fate of migratory fish, relative abundances had dropped below 98 percent from historic highs for 13 species, and below 90 percent for another 11, with most species reaching their lowest levels in recent years.

Numerous populations of these fishes persist at sharply reduced levels, but all species had suffered local extirpations and many are now classified as threatened or endangered. A particularly worrisome case is the European sea sturgeon, so highly regarded that in the 1300s it was designated as a “royal fish” by England’s King Edward II. Sea sturgeon once comprised almost 20 populations in rivers between the Baltic Sea and the Black Sea; they are now restricted to a vanishingly small stock in France’s Gironde River. 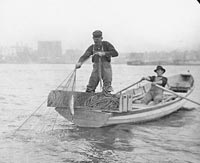 New York State Archives
In this 1899 photo, a man pulls a net while shad fishing on the Hudson River.

Even such lightly fished species as alewife are now protected from any harvest in several U.S. states because of recent population crashes. Habitat loss (especially damming), overfishing, pollution, and, increasingly, climate change have all contributed to declines in this group. Warming is already altering the geographic ranges and timing of migrations of some fishes, which likely will create “mismatches” to their established ecological relationships.

Because of their remarkably high abundances and importance in early Colonial times and the sheer magnitude of their subsequent collapse, North Atlantic diadromous fishes — those that migrate between salt and fresh water — offer a particularly egregious example of eco-social anomie. Here is a generalized history: As industrialization intensified, already overharvested migratory fish populations were sacrificed for the construction of dams for power mills. This blockage of spawning habitat reduced runs further, wiping out upriver fisheries and causing downriver fisheries to dwindle or perish. The fundamental aquatic ecology of these systems also was harmed: With fewer adults entering rivers and fewer juveniles leaving them, the normal energy transfers between fresh and marine waters were reduced, and interdependencies between diadromous fishes and their associated animal and plant communities withered.

With catches diminished, local dependencies on this food source declined, and with that, a primary constituency for the welfare of the fish runs. Industrialization led to increased contamination, growing human populations led to greater discharge of sewerage, and rivers began to serve more as power sources and gutters for societal wastes than as productive ecosystems. The disappearing migratory fishes may have granted “permission” for additional ecosystem corruption because there was less cost in further debilitating rivers.

To end the steady degradation of ecosystems, we need to rewind important historical connections.

Mitigation for the loss of wild runs of these fishes was most often in the form of the easy but nearly always ineffective — if not downright destructive — stocking of hatchery-reared specimens. The exquisitely fine-tuned life histories of natural runs to their home rivers became quashed by mass-produced specimens that were less fit, but that nonetheless competed with any remaining wild individuals, reducing their fitness, too, as they interbred. Responsibility for the continuity of the runs shifted away from maintaining ecological integrity of fish runs and rivers to what amounted to a cosmetic patch via outsourcing. Abundant research has shown that a fish is not a fish is not a fish.

As Richard Judd wrote in Common Lands, Common People, “An artificial resource maintained in a habitat no longer capable of spontaneous growth, fish became a property of the state rather than an element of the providential natural landscape.”

To put an end to the steady degradation of many ecosystems — marine and otherwise — we need to rewind important historical connections and dependencies. But tools to do so are also necessary: funding, legislation and, finally, education to rebuild societal awareness and the will to effect needed changes.

In the U.S., until the importance and legal standing of these fishes and their habitats were elevated with the Clean Water Act of 1972 and other environmental statutes, resource managers lacked the means to do much except to try and maintain existing baselines. Since then, a few victories have been won and critical precedents set. It took a population crash of Chesapeake Bay striped bass in the 1980s to push Congress into enacting laws that forced the necessary draconian changes to those fisheries. But these fish made a celebrated comeback, showing what can be accomplished with a truly determined effort. The striped bass was fortunate because it had a vocal constituency of commercial and recreational fishermen calling for its revival.

The lesson from this — one which has been learned the hard way across all kinds of fisheries — is to avoid reaching the crisis stage. This philosophy, known as the “precautionary principle,” is beginning to take hold with the simple wisdom of erring conservatively in setting fish harvests.

The striped bass had a vocal constituency of fishermen calling for its revival.

Maine has shown exemplary leadership in reopening rivers to migratory fishes with the dismantling of the Edwards Dam on the Kennebec River in 1999, an action that allowed sturgeons, shad, and striped bass to swim and spawn in a 17-mile stretch of the river that was blocked for a century. Similar efforts are underway in Maine’s Penobscot River, and these include novel compromises that will maintain hydroelectric power generation levels while eventually reopening hundreds of miles of main-stem river and tributaries.

Many smaller dam-removal and fish-passage efforts are also underway on both sides of the Atlantic, including efforts to bring Atlantic salmon back to the Thames, the Rhine, and the Seine. Maine also is home to the newly formed Diadromous Species Restoration Research Network that will help coordinate restoration efforts of academic, government, and watershed activists and residents, both in the Penobscot River and throughout the northeast.

Alewives were once so numerous along the eastern coast of the U.S. that they were likened to the passenger pigeons of the sea. Sadly, precipitous decline across much of their range is reminiscent of the passenger pigeon’s demise. A new amendment to the Atlantic States Marine Fisheries Commission’s Interstate Management Plan for alewife and its relatives calls for detailed restoration, adapted to the state level.

Many grassroots organizations also are fighting for protection and restoration of their alewife spawning creeks on a local level. Reconnecting the public with their neighborhood alewife run has been brought to an advanced plane in the Ipswich River, Massachusetts, with an innovative Adopt-a-Herring Program, where students track radio-tagged individuals as they migrate upriver, learning much about fish and stream biology along the way, as well as regaining a sense of responsibility for securing continuity for this natural phenomenon.

Although we are still far from hearing the societal shout on their behalf that is needed, voices are rising as numbers of many North Atlantic diadromous fishes continue to dwindle. But it will require greater concerted action to actually reverse their vicious spiral. Until then, these creatures would be advised to heed the words of Henry David Thoreau, from A Week on the Concord and Merrimack Rivers: “Keep a stiff fin then, and stem all the tides thou mayst meet.”