In the rolling brown hills of Livermore, Calif., looms a 10-story building the size of three football fields stuffed to the rafters with lasers, mirrors, crystals, optical amplifiers, and other exotic technology. This is the National Ignition Facility (NIF), a monument to science’s enduring obsession with fusion.

The NIF is home to the latest attempt to fuse two nuclei into one in a manner that does not result in a thermonuclear explosion. Inside this massive building, the world’s largest and highest-energy laser focuses the intense energy of 192 separate laser beams into an even more intense single beam aimed at a BB-sized target filled with hydrogen fuel, with the goal of creating a tiny star by replicating the process that powers the sun and similar celestial bodies.

This controlled form of fusion theoretically could tap into the boundless energy that binds the universe together, creating intense heat and driving huge generators that could supply enough power to run the entire world’s electricity grid in perpetuity. Controlled fusion would produce no greenhouse gases, would not require hazardous nuclear fuel, would produce shorter-lived and less hazardous waste than nuclear reactors, and would pose no danger of a runaway reaction, because fusion reactions are hard to start and quickly halt after running out of fuel. 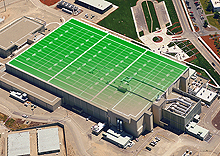 Sound too good to be true? Well, so far it has been. The massive energy gain from controlled fusion is a prize that scientists have sought for decades. Yet to date, no laboratory has successfully pulled off a controlled, small-scale fusion reaction in which the energy created by the reaction exceeded the energy needed to generate the reaction.

But researchers at the National Ignition Facility — part of the Lawrence Livermore National Laboratories —insist they are making progress toward this elusive goal. In the coming months, they will conduct a critical test as their laser beam attempts to jam together hydrogen atoms in the target, transforming tritium and deuterium into helium molecules.

The NIF scientists working on the project are understandably reluctant to oversell their prospects for success. “We are not expecting it to work on the first try,” explains Jeff Latkowski, chief engineer of the Laser Inertial Fusion-Fission Engine (LIFE) program and a key participant in the NIF’s development process. “And the best-case scenario for an actual pilot fusion power plant is a decade away.”

Should a test-firing succeed this year and fusion be demonstrated in Livermore, the NIF team would be far more likely to get the billions more from the Department of Energy that the NIF leadership says are needed to build the first-ever prototype fusion reactor. That reactor would not produce electricity for the grid, but the team at the NIF has already drawn up plans for a full-blown commercial-scale fusion power plant to be constructed in the future.

If tests fail this year, the U.S. could cede its lead in the controlled fusion race to China and other nations.

If the tests fail this year and fusion efforts do not receive subsequent funding, the U.S. could cede its leadership position in the controlled fusion race to France, Japan, and China, all of which are racing to create fusion reactors. China, in particular, is committing huge amounts of money to fusion research as it eyes a potentially game-changing way to power its headlong industrial growth.

For the NIF team, obtaining federal funding for energy research in an environment of massive budget deficits is unpredictable at best. Fusion has, unfortunately, established a reputation for always being a technology that is a decade away from reality. In the coming year, the National Academy of Sciences will hold a critical review of prospects at the NIF.

Indeed, as work has dragged on for more than a decade and the costs of trying to create even an experimental fusion reaction have reached $4 billion, criticism of the National Ignition Facility has mounted. Critics say that the U.S. Department of Energy (DOE), which oversees and funds the project, should have first done more research and development into the underlying science and technologies. One of the project’s most vocal critics — Christopher Paine, director of the nuclear program at the Natural Resources Defense Council — said despite spending $450 million a year, the ignition facility isn’t close to achieving its goal.

“Livermore’s hype about a… reactor — of any type — as a realistic possibility in the near- to medium-term is bizarre and irresponsible hype, and entirely unworthy of what is supposed to be one of DOE’s premier scientific laboratories,” Paine says. “This is swiftly developing into the biggest failure in the history of American ‘big machine’ experimental physics.” 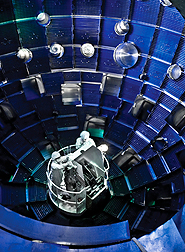 The goal of igniting controlled fusion is simple in concept but fiendishly complicated in execution. The NIF utilizes a process called inertial confinement fusion that relies on an intense laser to heat and compress a tiny fuel target of hydrogen molecules. The target is a capsule of deuterium and tritium the size of a BB pellet. That fuel pellet is suspended inside a gold cylinder the size of a dime, called a hohlraum. The laser applies intense bursts of energy to the inner walls of the hohlraum, heating the chamber and bathing the target capsule with a wave of X-rays that quickly heat the exterior of the fuel pellet. That vaporizes the surface and compresses the internal fuel materials to create a central spot inside the hohlraum where the fusion reaction occurs.

The goal is to catalyze a chain reaction of fusion known as “ignition.” This reaction would consume a significant portion of the fuel and produce heat. When the fuel runs out, the reaction would stop. A fusion reactor would be designed to ignite thousands of very small payloads of hydrogen, or targets, each day, maintaining continuous heat and energy production while also keeping tight control over the chain reaction. The merger of like nuclei would release energy far exceeding the sum of energy expanded to start the fusion reaction. The critical hydrogen fuel materials, deuterium and tritium, can easily be harvested from seawater; there is enough in the global oceans to fuel reactions equivalent to the world’s current power needs for billions of years.

Since the 19th century, scientists have theorized that humans could recreate the energy that powers the stars.

Scientists have theorized since the 19th century that humankind could recreate the energy that powers the stars. Albert Einstein’s E=mc2 equation explained how a small amount of mass could be transformed into an enormous amount of energy. In 1939, physicist Hans Bethe wrote a quantitative description of fusion energy processes in stars, a breakthrough for which he was eventually awarded the Nobel Prize for Physics. Researchers in the U.S., the U.K., and Russia — their interest stoked by the successful deployment of the hydrogen bomb in 1950 — worked on systems to use magnetism to confine targets to pinch together atoms to induce fusion. Among the research leaders was the dissident Soviet physicist, Andrei Sakharov, who developed a type of magnetic confinement that is the basis for the major fusion efforts today, including the NIF.

While the advent of computers, high-grade optics, and powerful lasers has fueled ever-more powerful fusion attempts, scientists have yet to create a controlled reaction that met the critical criteria of creating net positive energy. Positioning a laser beam at a tiny target and holding that target extremely steady has proven to be harder than expected, as even tiny movements on the scale of microns can result in misalignments that prevent ignition. And despite multi-billion dollar investments in fusion efforts, scientists have hit two other major obstacles: the inability to concentrate enough energy to run sufficiently powerful lasers, and the difficulty of making magnetic confinement vessels strong enough to allow for rapid-fire fusion efforts.

Other daunting technical hurdles remain. The scientists at NIF will have to somehow radically increase the frequency of laser firings from several times per day to 10 to 15 times per second. “The NIF is not intended to be an efficient machine,” explains Latkowski. “It’s designed to demonstrate the physics.” One key breakthrough occurred when the NIF and its collaborators developed a new way to rapidly grow crystals critical for converting the frequency of the laser beams. Without these fast-growth crystals, the NIF would have struggled to get to its current pre-ignition position.

Even project researchers say fusion on the power grid remains at least 15 to 20 years away.

But critics of the NIF say that the project has become a boondoggle, with Lawrence Livermore’s estimated cost to build an ignition-grade laser facility soaring from $400 million in 1990 to at least $3.9 billion today. Paine, of the NRDC, says the real cost of the so-called “National Ignition Campaign” is now $5 billion to $7 billion. In an email to Yale Environment 360, he also said that Lawrence Livermore and NIF ignored concerns that a more extensive period was needed for research and development, and he claimed that a scientific review committee that gave the go-ahead for the project was “blatantly stacked” in favor of the NIF.

No one doubts the physics of fusion, with physicists and other scientists generally believing controlled fusion for energy production is eventually doable. U.S. Secretary of Energy Steven Chu, a Nobel prize-winning physicist, is a strong believer in the NIF program and the future of fusion.” We’re going to assume that ignition is going to be achieved,” Chu told Lawrence Livermore National Laboratory employees last year.

For many members of the NIF team, this quest has involved a multi-decade commitment, and many scientists there see the effort as likely to be the crowning scientific achievement of their careers. But for Latkowski and his colleagues, there is intense pressure to succeed, as the runner-up in fusion will likely be consigned to scientific oblivion.

“There is nobody who is as close as the NIF is right now,” says Latkowski. “We’ve worked extremely hard to get here. The French are maybe five years behind. The Chinese have gotten very interested in constructing a large ignition machine. Five years ago they were 20 years behind the NIF. Now we estimate they are only a decade behind. They graduated 2,000 PhDs in plasma science last year. That’s an astounding number, and it underscores their seriousness about fusion.”

Should the NIF program succeed, an even more ambitious project is being planned. Dubbed LIFE (Laser Inertial Fusion Engine), the project is designed to use the ignition capabilities of the NIF to drive a fission reaction that would use dangerous radioactive waste as fuel for power plants that could run for 40 years without needing to replace the fissile material. At the end of the power-plant life cycle, the fissile material would be effectively degraded, making it far less radioactive. The LIFE would be expected to generate power more easily than a pure fusion reactor.

The NIF’s more reliable, compact, and cheaper lasers, metals, mirrors, and other components would likely be incorporated into the LIFE, allowing the NIF team to shrink the size of the LIFE laser firing facility from over 300 feet in length to well under 50 feet, Latkowski says. And that facility could actually be blueprinted into a modular assembly piece ready for factory production. But Paine says the project faces daunting challenges because the solid-state glass laser being used by the NIF “cannot begin to approach” the firing rate needed to drive the LIFE project’s fission reaction.

Even those at NIF say that fusion on the power grid remains at least 15 to 20 years away. But they maintain that despite the delays and cost overruns, the potential payoff — changing the way we generate energy — is worth it.