In the 1960s, when Zhou Fabei moved to Xishuangbanna prefecture, a tropical corner of southwest China’s Yunnan province, he quickly landed a job building roads for new rubber plantations. The timing of his move from the populous central province of Hunan couldn’t have been better for him: China’s post-revolutionary government had just started slashing forests and promoting rubber cultivation by state-run firms.

By the 1980s, the government was offering incentives to the prefecture’s poor farmers — many of them from ethnic-minority groups — to plant rubber on their homesteads as a way to escape poverty. Further subsidies were introduced over the next two decades, and China’s 2001 entry to the World Trade Organization granted its farmers better access to global commodities markets. As global rubber prices have soared to meet rising demand for tires and other rubber-based consumer products, many Xishuangbanna rubber farmers have catapulted into the middle class. Farmers in villages near Jinhong, the prefecture capital, said recently that they earn four times what they would for growing rice.

“Rubber is the main industry in Xishuangbanna,” says Zhou, now 66 and retired. “It’s the key reason why people here are getting rich.” 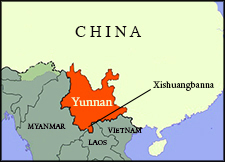 Today more than one fifth of Xishuangbanna is planted in rubber, both by individual villagers and large companies, and the noxious smell of rubber processing hangs in the air on Jinhong’s rural outskirts. But those are the least of the problems created as monoculture rubber plantations have replaced exceptionally biodiverse forests and contributed to a host of emerging environmental problems. These include topsoil erosion, rising stresses on watersheds and hydrological cycles, and reduced rates of carbon sequestration, according to scientific studies. The plantations also carve up the habitat of native animals like Asian elephants and white-cheeked gibbons, according to a 2012 study by the scientists R. Edward Grumbine and Xu Jianchu.

Grumbine, an American author and scientist in Yunnan’s capital, Kunming, argues that because of rubber expansion, Xishuangbanna’s tropical forests are losing their ability to provide non-timber forest products and other economic resources linked to healthy ecosystems. “There are all sorts of positive stories that come out of the rubber transition — none of them are ecological,” he says, adding that Chinese government officials “bought into it before they understood fully the ecological consequences and the potential social and economic costs going forward.”

Environmental problems stemming from intensive cultivation of rubber and other cash crops also affect other regions in Southeast Asia where farmers are transitioning into plantation monocultures and away from swidden, or slash-and-burn, agriculture. The problems linked to that shift include erosion, increased stream sedimentation, accelerated pesticide use, and declining water quality, according to a 2009 study in the journal Science led by Alan D. Ziegler, a geography professor at the National University of Singapore. A study on rubber and oil palm expansion in Thailand by the U.K.-based nonprofit Birdlife International found that rubber plantations reduced biodiversity by at least 60 percent.

The government plans to convert under-performing rubber plantations back to natural forest.

In Xishuangbanna a handful of researchers are investigating the environmental impacts of rubber farming, and the government of this region that borders Laos and Myanmar is beginning to act. It has announced plans to convert a fifth of the prefecture’s under-performing rubber plantations back to natural forest. That is significant because Xishuangbanna contains the world’s northern-most tropical rainforests and is known as a hotspot for plant and animal diversity. Although it covers just 0.2 percent of China’s area, it contains about a fifth of its mammals and more than a third of its birds, according to a recent study in the journal Ecological Indicators by Grumbine and Xu.

Scientists say rubber is rapidly changing that rich natural legacy. A 2009 study found, for example, that total forest cover in the prefecture fell from 69 percent in 1976 to less than 50 percent in 2003, and that the number of forest fragments increased by more than a third. During that same period, the expansion of rubber plantations resulted in the loss of roughly 500 square miles of tropical rainforest, according to a 2007 study in the journal Biodiversity Conservation. Grumbine and Xu also report that the area covered by rubber in Xishuangbanna grew from about 214,000 acres in 1992 to more than one million acres — roughly 1,600 square miles — in 2010. The Chinese government counts rubber plantations as forests, though many scientists disagree with that assessment.

The rubber transition in the prefecture is now abundantly clear: The terraced plantations near Jinhong yawn over a narrow mountain road, forming a green canopy that smothers sunlight. And the view from the city’s riverfront promenade is of hillsides full of rubber trees, punctuated only by cellular towers and housing developments. 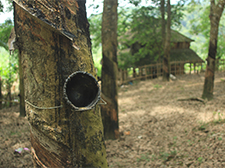 Global cultivation of natural rubber, which is native to the Amazon basin and was imported to Asia in the late 19th century, has expanded by about a third in the last decade, largely to feed the production of automobile tires. Synthetic rubber now accounts for more than half of global production, but natural rubber is still in high demand because it generally is cheaper and of higher quality. Asia accounts for about 97 percent of the world’s natural rubber production, with Thailand and Indonesia each producing about a third of the annual global total of roughly 11 million metric tons. (China produces about 6 percent of the total.) And global natural-rubber production is expected to increase further in the coming decades partly to meet growing consumer demand in China, which in 2002 surpassed the United States as the world’s largest rubber consumer because of China’s rapidly growing auto industry.

Scientists say rubber typically has been planted on hillsides in monocultures that leave nutrient-rich topsoil exposed to the elements. A common result is that monsoonal rains wash the soil into nearby rivers and streams, alter river PH levels, and force rubber farmers to use more pesticides to sustain yields on damaged soils, explains Zhuang-Fang Yi, a researcher in ecological economics at the World Agroforestry Centre’s Kunming office. A 2007 study in the journal Tropical Ecology found that organic carbon decreased in the soil of rubber plantations roughly 20 years after planting. By contrast, mixed plantations of rubber and tea in the study were found to be more efficient at sequestering carbon.

And rubber trees are said to be “water pumps” that often are linked to water depletion, according to a 2010 study in the journal Ecohydrology by a team of scientists from the United States and Singapore. Rubber farming has been blamed for a dramatic decline in fog frequency from the 1950s to the 1980s in Xishuangbanna, the study reported; the leading scientific theory is that rubber trees, which have especially deep roots, pull water from subsoils faster than trees in a rainforest would. Comparatively larger amounts of water then evaporate through the rubber trees’ leaves during the dry season.

Rubber farming has been blamed for a dramatic decline in fog frequency in the region.

The Asian Development Bank reports that each hectare of rubber plantation in its Xishuangbanna study area loses an estimated 22.5 tons of soil per year to erosion, and 136.5 tons of water through shrinking groundwater tables. “It’s no surprise that if there’s no consideration of forest protection, then in the next 25 years Xishuangbanna is going to be much drier in the lowlands,” says Zhuang-Fang Yi, the World Agroforestry Centre researcher who is analyzing hydrological changes in the prefecture.

The government has outlined in a recent five-year plan a program to convert under-performing rubber plantations back to natural forest while also planting trees along stream beds to prevent erosion and restore animal and bird habitats. However, Janet Sturgeon of Canada’s Simon Fraser University says the program should target state-owned or state-affiliated rubber companies, but that likely would clash with the political status quo. 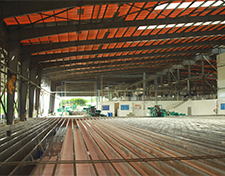 “The prefecture government has woken up to the environmental impacts of rubber, but they still want to plant rubber,” says Sturgeon, who has conducted extensive fieldwork in Xishuangbanna. “Their motivation… for their salaries and careers comes from increasing economic growth.”

But some scientists say they are more optimistic that Xishuangbanna can embrace a more holistic approach to rubber cultivation that offers both smallholders and state-owned or -affiliated rubber companies incentives to green their practice. In particular, they suggest intermixing rubber with crops like rice, cacao, coffee, and tea as a way to lessen ecological impacts while sustaining profits and farmer livelihoods. Diversified planting ultimately will be in China’s best interests if it wants to keep its rubber safe from diseases like South American leaf blight, which has devastated rubber crops on that continent, says Gerhard Langenberger, a botanist at the University of Hohenheim in Germany.

Zhou Fabei, the Hunan province native who moved to Xishuangbanna in the early days of its rubber boom, says he is grateful for the economic benefits that rubber has brought to him and his family. But he also knows the landscape, and acknowledges that the signs of ecological damage are increasingly apparent. “Rubber requires so much water that humidity’s decreasing, and it’s getting hotter,” he said recently in a village near Jinhong. “And because we cut the forests down, the animals ran away.”