In 1883, New York faced an environmental crisis. Water levels were falling in the state’s rivers and canals, impeding travel and shipping. Scientists and editorial writers placed the blame on the logging and burning of the Adirondacks, which prevented the forests from exercising their usual moderating influence on stream flows. With the loss of the forests, it was feared, the steady release of water would be replaced by a cycle of floods and low water.

To make matters worse, these impacts were the result of logging only on the fringes of the Adirondack region. But in 1883, the Adirondack Railroad Company proposed to build a line through the heart of the forest. The inevitable expansion of logging into the interior would, in the words of a New York Tribune article, result in “disastrous climatic changes, … wasting freshets and parching drou[ghts].” 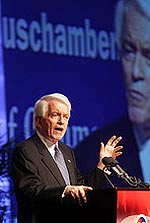 As the newspapers filled with editorials calling for the protection of the “North Woods,” an unlikely champion of environmental protection responded: the New York Chamber of Commerce. A chamber committee proposed that the state purchase up to 4 million acres and “keep it for all time as a great forest preserve.” This was the crucial first step toward the creation in 1892 of the Adirondack Park, which today encompasses 6 million acres and is the largest publicly protected area in the contiguous United States. Given the powerful railroad and timber interests arrayed on the other side, the birth of the park would not have been possible without the early advocacy of the chamber.

Contrast this history with the actions of the U.S. Chamber of Commerce today. The chamber, by far the largest lobbying force on Capitol Hill — having spent more than $65 million in 2009 — is actively campaigning against meaningful climate change legislation. It is also taking a lead role in challenging the Environmental Protection Agency’s (EPA) attempts to regulate greenhouse gases under the Clean Air Act. More fundamentally, it continues to cast doubt on climate change science and sow fears through exaggerated claims about the economic consequences of greenhouse gas regulation.

These influential business lobbies, acting 125 years apart, took two sharply different approaches to the most pressing environmental issues of the day. Their divergent paths cast the U.S. chamber in a sorry light, and ensure that it will one day be judged harshly by history.

The U.S. Chamber of Commerce has a long history of disputing the human impact on climate.

One major difference between the two groups is that the New York chamber sought out — and followed — the advice of scientists. That era, too, had its deniers. One member of the State Assembly suggested that “the Hudson River is an arm of the sea, subject to tides, and there will be plenty of water upon which to float the commerce of the State if not a drop of water flows into it from the Adirondack region.” The chamber did not side with those views, but instead followed the advice of scientists like Charles Sprague Sargent, director of the Arnold Arboretum at Harvard. Sargent told the chamber that “no doubt could possibly exist as to the necessity of putting a stop to the work of destruction now going on in the Adirondacks.”

By contrast, the U.S. Chamber of Commerce has a long history of disputing the human impact on climate and of promoting the work of climate change deniers. In 2001, William Kovacs — then the Chamber’s Vice President of Environmental Policy — claimed in an appearance on CNNfn that “there’s no link between greenhouse gases and human activity.” In a 2008 memo to the Chamber’s Board of Directors, chamber President Thomas J. Donohue claimed that “scientific inquiry” into global warming “should continue… given the recent reports indicating a cooling trend.” The National Chamber Foundation, the chamber’s nonprofit affiliate, named books by climate change deniers among its top ten recommended books of 2008 and 2009.

Moving from words to actions, last spring the chamber formally challenged the findings underlying the EPA’s decision that greenhouse gas emissions endanger the public health and welfare and should therefore be regulated. Kovacs claimed that the goal of this challenge was to create the “Scopes monkey trial of the 21st century” — a reference to the infamous prosecution of a Tennessee schoolteacher for his teaching of evolution in the 1920s. According to Kovacs, a public hearing on the endangerment finding “would be the science of climate change on trial.” This month, the chamber became one of more than a dozen groups, states, and corporations filing petitions to block the EPA from regulating carbon dioxide emissions. 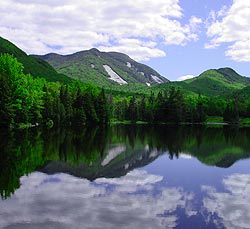 iStock
In the late 1800s, the New York Chamber of Commerce focused on the long-term economic impacts of Adirondack deforestation.

A second key difference between the two chambers is that the New York chamber took a broad and long view of its members’ economic interests. The timber and railroad industries stood to make large profits from the destruction of the Adirondack forest. Nevertheless, the New York chamber focused not on these lost short-term profits but on the potentially devastating long-term economic impacts of Adirondack deforestation for all of its members. Declining stream flows meant, Harper’s Weekly wrote, that “agriculture will suffer, manufactures will languish for want of power, and the great internal waterways of the continent will be rendered useless for commercial interchanges.”

Today, the U.S. chamber appears not to recognize the economic threat posed by climate change. Instead, the chamber’s leadership continues to trot out exaggerated and one-sided claims about how the regulation of greenhouse gases would eliminate jobs and “strangle the economy.” While some companies in the fossil fuel and power sectors will face reductions in profits under a cap-and-trade scheme, the long-term consequences of unchecked climate change will be harmful and expensive for everyone.

In an unprecedented show of dissent, corporations have renounced their membership in the U.S. chamber.

In fact, as many forward-looking companies recognize, cap-and-trade legislation will be good for business. Among other things, it will provide incentives for U.S. businesses to invest in the next generation of clean energy technologies. This impetus is long overdue, as the country falls behind China and Europe in this area. In an unprecedented show of dissent, corporations such as Apple, Exelon, Johnson & Johnson, Nike, and Pacific Gas and Electric have either renounced their membership in the chamber or expressed dismay at the chamber’s position. Moreover, many local chambers — including the Greater New York Chamber of Commerce, the San Francisco Chamber of Commerce, and the Greater Seattle Chamber of Commerce — have distanced themselves from the U.S. chamber on climate change.

In recent months, the chamber, apparently stung by the series of resignations and the withering criticism in the press, appears to have softened its tone. But underneath the new rhetoric there appears to be little, if any, change in substance. The chamber’s chief legal officer said the chamber was not challenging “scientific issues related to climate change.” Yet despite that statement, the chamber continues to do all it can to block any regulation of planet-warming greenhouse gas emissions, clearly demonstrating that it has still not learned the lessons that the New York chamber mastered more than 125 years ago. The U.S. chamber still stubbornly refuses to acknowledge the scientific consensus that climate change is real and it continues to brush aside the serious economic risks that climate change poses.

In the words of Peter Darbee, chairman and CEO of Pacific Gas & Electric, “an intellectually honest argument over the best policy response to the challenges of climate change is one thing; disingenuous attempts to diminish or distort the reality of these challenges are quite another.”

As long as the chamber adopts the latter approach, it cannot be a legitimate participant in the public debate on cap-and-trade legislation.