For the past few years, Douglas McCauley has been tracking Pacific manta rays that live around a chain of remote islands called Palmyra Atoll. McCauley, a marine biologist at the University of California at Berkeley, and his colleagues tag the giant fishes with “pingers” — acoustic devices that emit pulses — and then follow the sound. “You’re in a boat, following the animal night and day,” says McCauley.

The scientists embarked on this study to learn more about the ecology of these majestic animals. “There’s remarkably little known about manta rays,” McCauley says. Pacific manta rays are among the biggest fishes in the world, with wing-like fins that can stretch as far as nine meters across. To feed their massive bodies, they suck water into their mouth and out of their gills, trapping tiny animals in a filter-like mesh of bones. Any changes to the ocean food web — a rise in temperature or a drop in nutrient levels, for example — can influence the size of the manta ray population.

As the scientists followed the manta rays, they noticed something peculiar. Off in the distance, they could see Palmyra’s island chain. Much of Palmyra

Life on land and life in the ocean are bonded in unexpectedly powerful ways.

is still covered by forests of native trees. But there are also stretches of the island dominated by coconut palms — first brought by Polynesians centuries ago and increasingly planted today as a cash crop. As McCauley gazed off at the islands, it occurred to him that he was spending all his time off the coast of the native forests.

“We were puzzled that we kept being brought back to these coastlines with abundant native forests,” says McCauley. “We realized that maybe to understand the manta rays, we had to follow this message they were giving us.”

McCauley and his colleagues followed up that initial hunch with rigorous scientific tests. And it turned out they were right. Each hour that they spent surveying manta rays off the coast of native forests, the scientists encountered, on average, four fish. Off the coast of coconut palm stands, they found none.

What do trees and manta rays have in common? In today’s issue of the journal Scientific Reports, the scientists offer evidence that ecological links join them across the barrier between sea and land.

The new study is a particularly striking illustration of a pattern that scientists are finding around the world. Life on land and life in the ocean are bonded in unexpectedly powerful ways. While they may seem like separate realms, the well being of one depends on the other. 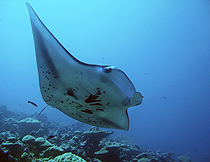 Courtesy of Gareth Williams
Researchers found that Pacific manta rays were affected by ecological changes in coastal forests.
To figure out why native forests help manta rays thrive, McCauley and his colleagues made careful measurements of Palmyra’s marine and terrestrial ecosystems. They started with sea birds such as red-footed boobies, which fly over the ocean to catch fish. The birds then return to the islands to make nests in the trees. When the scientists surveyed Palmyra’s birds, they found that the native forests had five times more birds than the palm forests.

The difference lies in the architecture of the trees. Palm trees are essentially pillars, with tufts of leaves on top that whip back and forth in the wind. Palmyra’s native trees, by contrast, form dense, thick canopies where birds can find stability and protection.

Nesting in the trees, the birds drop lots of guano on the ground. The guano is rich in nitrogen; the scientists found that the soils of the native forests have nitrogen levels five times higher than those found in palm forests. The guano thus fertilizes the trees, which build up a greater concentration of nitrogen in their leaves. The leaves then fall to the ground and create a deep, rich soil.

To track the fate of the nitrogen, McCauley and his colleagues took advantage of a quirk of guano. Nitrogen atoms come in different isotopes (with different number of neutrons in their nucleus). Guano happens to be rich in one isotope known as nitrogen-15. “We used the chemistry to link

Runoff from native forests had 18 times more nitrogen than that of planted palm forests.

each one of these interactions one to the other,” said McCauley.

The soil and leaves in native forests are high in nitrogen-15 as well. When the rain comes to Palmyra, it washes that guano-derived nitrogen — along with other nutrients from the rich soil — out into the ocean. The runoff from the native forests had 18 times more nitrogen than that of palm forests, the scientists report.

That nitrogen influences life on the way from the land to the sea. Clams living in the intertidal zones on the coasts of native forests have elevated levels of nitrogen-15. So do sponges in the reefs further out at sea. The nitrogen and other nutrients flowing out from the native forests fertilize phytoplankton — the sun-harnessing algae in the ocean — much as it does the trees on land.

McCauley and his colleagues also found that the zooplankton — the tiny animals that graze on the phytoplankton — was three times more abundant off the coast of native Palmyra forests than off the coasts of palm forests.

McCauley’s study highlights why ecosystems on land and at sea can become linked. Nitrogen and other nutrients are often in scarce supply, and living things are very good at concentrating them and moving them from one place to another. Palmyra’s birds draw out the nitrogen from the ocean and concentrate it in the forests, which then deliver a rich supply of nitrogen and other nutrients back to the ocean, ultimately providing manta rays with food.

A similar process takes place in the northwestern United States, where streams are starved for nitrogen. Each year, vast numbers of salmon swim

When we damage the links between land and sea, we can have surprisingly big effects on ecosystems.

from the Pacific into those streams, where they mate, lay eggs, and die. We’re all familiar with footage of bears feasting on salmon, but they’re not the only ones to benefit from the migration of the fish. After the salmon die, the nitrogen in their bodies fertilizes the streams and enriches the soil. Plants that grow around salmon-choked streams have high levels of nitrogen 15 in their tissues.

These links between land and sea are particularly vulnerable, and when we damage them, we can have some surprisingly big effects on ecosystems. When people in the Pacific cut down native trees to plant coconut palms, they doubtless have no idea that they are affecting the lives of manta rays. And yet McCauley’s research suggests that this is precisely what is happening. As the native forests shrink, so too does the prime ocean habitat for the manta rays.

The disruptions can also flow the other way, from sea to land. On the Aleutian Islands in Alaska, for example, people introduced foxes in the early 1900s to harvest their fur. The foxes proceeded to attack the sea birds that nested on the islands, driving down their numbers. Since the birds ingested nitrogen-rich fish and deposited the nitrogen on land, the smaller population of birds delivered a smaller supply of nitrogen to the islands. The soil became less fertile, and the island ecosystems shifted from grasslands to shrubs.

Humans are also good at pumping nutrients between ecosystems. Farmers, for example, spread fertilizers on their fields, and the nitrogen and phosphates get washed into rivers and into the oceans. But this type of runoff is no cure for damaged land-to-sea links. It delivers too many nutrients in too little time. Instead of stimulating healthy ecosystems, it can instead create so-called “dead zones” in places like the mouth of the Mississippi River.

“Leave it to us to overdo things,” says McCauley.