Every two weeks or so, the South African Department of Environmental Affairs publishes a rhino poaching update, a running tally of rhinoceroses illegally killed for lucrative Asian black markets, along with a summary of arrests of poachers and rhino horn couriers. The latest, dated August 7, lists 553 rhinos poached so far this year and 147 arrests. South Africa is on track to lose 900 to 1,000 rhinos to poachers in 2013, smashing last year’s macabre record of 668. The epidemic of rhino poaching that broke out in 2008 shows no sign of dying down.

Africa’s elephants are also being shot in extraordinary and rising numbers for their ivory, now a hot-selling status and investment commodity in China. Experts estimate that a mind-boggling 25,000 to 40,000 elephants are being killed annually across the continent, which could be close to 10 percent of the total number remaining, and significantly more than are born each year. 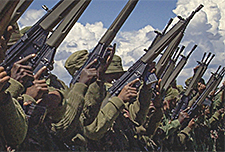 A Kenyan anti-poaching squad in training at the Ol Pejeta Conservancy. ADAM WELZ

Rhino and elephant protectors have sprung into action in an increasingly militarized effort to stamp out this carnage. Governments have given game rangers better weapons, engaged intelligence analysts, and put spotter planes, helicopters, and unmanned drones into the air. Some have deployed their national defense forces into national parks. Private wildlife custodians have spent millions on their own armed anti-poaching guards, sniffer dogs, mini-drones, and informants.

But as the response to rhino and elephant poaching has become progressively more militarized, a stubborn reality remains: The continental-scale slaughter of rhinos and elephants continues to intensify, despite rising arrests and killings of poachers and increasing interdiction of illegal shipments of rhino horn and ivory. And although the toll would no doubt be worse without the anti-poaching efforts, experts say that other aspects of the battle to save Africa’s wildlife — including improving justice systems and launching efforts to reduce consumer demand for wildlife products — have been given short shrift.

“You’re not going to just enforce your way out of this,” says Peter Knights, executive director of WildAid, a California-based conservation group that focuses on the consumer side of the illegal wildlife trade. “You’re never going to stop [poaching] by just putting new boots on guys in Africa because it’s a [game of] whack-a-mole.”

Knights believes that illicit wildlife products “always find their way out” to consumers who are willing to pay for them. That view is echoed by some drug policy experts, who liken the uphill battle against African poaching to the war on drugs, where the militarized enforcement-and-interdiction approach has been an extraordinarily expensive, bloody failure. “Where there is persistent demand for an illegal substance, there will be supply,” Ethan Nadelmann of the Drug Policy Alliance, a New York-based group that advocates for drug policy reform, told me.

Unmanned aircraft and two companies of soldiers have been deployed in Kruger National Park.

No place better illustrates the challenges of protecting pachyderms than South Africa’s Kruger National Park, which has lost far more rhinos than any other African park in recent years. It has come under siege by poachers working for criminal networks that smuggle the horns — used in traditional Chinese medicine — through neighboring Mozambique to illegal markets in Asia.

South African National Parks’ (SANParks) first response to the outbreak of poaching in 2008 was to ramp up conventional ranger patrols in Kruger, home to thousands of rhinos. Poachers, mainly from Mozambique, responded by coming in larger groups, a “triggerman” with a heavy-caliber hunting rifle and “guards” carrying AK-47s. They weren’t shy about shooting at rangers, and many firefights ensued, some with fatal results. SANParks began retraining and better arming its rangers, who arrested and shot more poachers, but it wasn’t enough — the poachers kept coming in even greater numbers.

In 2011 the South African National Defense Force deployed two companies of troops, 265 men, in and around the park to help with the fight. Park enforcers got more air support, including more helicopters. A new spotter plane was donated by a South African arms exporter in late 2012, and various unmanned aircraft — including sophisticated military drones made by South African arms manufacturer Denel — have recently been deployed over the park on a trial basis. “Many arrests are now made with air support,” a spokesperson for SANParks told me. 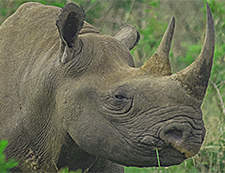 SANParks has an annual anti-poaching budget of about $7.5 million, much of that spent in Kruger, and support worth millions more is provided by other government departments and private donors. More poachers are being arrested than ever before, and at least 23 have been shot dead by rangers since 2008. Nevertheless, the rhino slaughter is intensifying: So far this year, 345 rhino have been poached in the park, more than double the number killed in the first seven months of 2012.

Scores of rhino charities now collect millions of dollars annually around the world for public and private anti-poaching efforts across Africa. South Africa’s large private game farming and wildlife safari industries also now collectively spend millions of dollars annually on new armed guards. Most anti-poaching companies offer military-style training, and some are operated by South African soldiers of fortune who have worked for U.S. security contractors in Afghanistan and Iraq.

One company, Diceros, is marketing an integrated system made up of U.S. and South African military and security industry technology that includes high-definition radar, in-earth microphones, communications interception, long-range cameras, and drones. The company says that its gear currently monitors cattle rustlers and other smugglers on and around Lake Victoria in central Africa’s Rift Valley, with great success.

WWF is researching integrated high-tech, drone-centered surveillance systems in the arid north of Namibia. Funded by a $5 million grant from Google, WWF’s aim is to find reliable ways of integrating imagery from unarmed drones with real-time information about the location of poachers, armed ranger patrols, and electronically tagged rhinos so that rangers can be optimally deployed to protect the animals. Crawford Allan, a senior WWF/TRAFFIC wildlife crime expert, said that the project had been approached by dozens of drone manufacturers because “their military contracts are depleting and they’re looking for civilian applications” for their aircraft.

Kenya, which has lost a steadily increasing number of elephants and rhinos in recent years, has also entered the arms race with poachers, increasing its government budget for armed ranger patrols and just last week announcing a new, elite anti-poaching unit.

Many other African countries, including Botswana, Gabon and Cameroon, have deployed military units to conservation areas in recent years in response to increased poaching, including high-profile mass killings of elephants in central Africa by poachers with links to Janjaweed militias in Sudan.

Still, the epidemic rages on, prompting many experts to argue that a wider effort is needed. A key failing, conservationists say, lies in the continent’s justice systems, where evidence collection is often botched, prosecutions poorly handled, and judges often don’t take wildlife crime seriously, which sends the message that poaching is no big deal. Although some low-ranking “triggermen” have been caught and jailed in South Africa, cases against higher-level kingpins have dragged out for years.

In Kenya, conservationists were outraged when two guards implicated in a recent, brazen theft of ivory from an allegedly secure government stockpile were fired but not prosecuted. On July 1, a former U.S. defense attache, David McNevin, was caught at Nairobi airport with illegal ivory in his luggage. Despite the case’s high profile, his only punishment was a fine of about $350.

Incidents like these have amplified calls for poaching to be treated as seriously as drug smuggling and terrorism, with which, criminologists point out, it is often linked logistically and financially. President Obama’s new task force on wildlife trafficking is heavily populated by representatives from the departments involved in anti-drug and anti-terror efforts.

A well-crafted social awareness campaign in Asia could drastically reduce demand for rhino horn and ivory.

But, like the war on drugs, there are early signs that the war on poaching is plagued by the so-called “balloon effect.”

“When you suppress drug production in one area, it pops up in another” because consumer demand persists, said Nadelmann of the Drug Policy Alliance. The South African rhino crisis, for example, was preceded by a little-publicized wave of poaching in neighboring Zimbabwe, said Jo Shaw, WWF-South Africa’s rhino policy expert. Conservationists responded by relocating the country’s remaining animals into relatively small “intensive protection” zones, after which poaching took off in South Africa.

Wildlife traffickers are already shifting illicit transport routes in response to interdiction efforts through countries with weak controls, such as Togo. Some of the largest illegal ivory consignments recently interdicted in Asia, involving thousands of tusks, have originated at Togo’s port, Lome. Since Togo probably has a population of fewer than 65 elephants, the ivory clearly comes from elsewhere. In southern Africa, smugglers now avoid going through Johannesburg’s international airport, preferring the nearby, more poorly policed airport in Maputo, Mozambique.

If enforcement and interdiction is not sufficient, what else night work? Nadelmann cites a case from the drug world involving the club drug Ecstacy, popular in the 1990s. Its popularity declined rapidly after dealers began adulterating its main ingredient with other substances, thus destroying its reputation among users. Nadelmann suggested that “creative interventions in the market” designed to create distrust among Asian buyers about the quality or value of rhino horn and ivory might lower demand.

Some South African rhino owners are already attempting to degrade the value of rhino horn by injecting a combination of toxic insecticides and indelible dye into live animals’ horns. The toxic dye concoction will likely sicken (but not kill) consumers and will also make the horns more visible on x-ray machines. It’s too early to say if this has reduced demand, but owners are confident that it at least inspires poachers to avoid shooting animals with tainted horns.

Some media-savvy conservation groups say that well-crafted public relations and social awareness campaigns in Asia could significantly reduce demand for rhino horn and ivory, pointing to recent successes by a campaign to cut shark fin use. WildAid, which has produced slick video spots featuring celebrities to persuade Asians not to consume shark fin soup, said that shark fin imports into Hong Kong, a major hub for the trade, dropped by more than 70 percent from 2011 to 2012 as the campaign took effect.

WildAid’s Peter Knights said that the group has recently produced spots against rhino horn and ivory consumption, but had struggled for over a decade to fund them. It’s extremely difficult to raise money for campaigns to reduce demand, said Crawford Allan of WWF/TRAFFIC, because “donors like to see boots on the ground and technology.” Other conservationists say that donors, politicians, and the media find images of armed anti-poaching patrols, drones, and military equipment “sexy,” lamenting that the multi-faceted nature of the struggle to save rhinos and elephants is often glossed over.

Knights told me that policymakers have recently shown greater interest in targeting demand in Asia. Meanwhile, the stakes for rhinos and elephants get higher by the day, as ever-stronger groups of poachers continue to reap their harvests across Africa.