The flying foxes, or giant fruit bats, normally just doze in the treetops through the day, but on this afternoon they were fanning themselves, panting frantically, jostling for shady spots, and licking their wrists in a desperate effort to cool down. Suddenly, when the thermometer hit 42 degrees C, the bats began falling from the trees. Most quickly died. Welbergen and his colleagues counted 1,453 flying foxes that died from the heat in one colony alone. The scorching heat that day killed at least 2,200 additional flying foxes in eight other colonies along a 250-kilometer stretch of coastline. All the deaths occurred in colonies where temperatures soared above 41.7 degrees C.

Welbergen later documented the deaths of another 19,000 flying foxes during extreme heat waves in tropical Australia from 2003 to 2006, and thousands more have died since then. Only a few such mass die-offs were ever recorded before 1994.

Much has been written about how global warming will affect the colder parts of the planet — the polar and boreal regions, glaciers, and alpine mountains. In fact, some of the warmest places on Earth, especially tropical rainforests, could also be intensely vulnerable to climate change. While much remains uncertain when it comes to climate change and rainforests, evidence is mounting that a warmer world will lead to greater mortality of certain tropical forest species during increasingly common heat waves, will encourage the spread of diseases affecting many creatures, and could well lead to increased desiccation and fires in tropical forest ecosystems, the biologically richest regions on the planet.

Temperatures in the tropics vary little, and many species have evolved to become thermal specialists.

We understand some things pretty well, but other potential impacts of warming are only suspected, and yet others are hotly debated by scientists. At this point, we’re sure that the tropics are already getting warmer — around 1 degree C higher, on average, in the past century. These rising temperatures will interact with natural weather variability, with one key result being that heat waves will become more intense and frequent.

Many people are unaware that tropical species are often sensitive to hot weather. Temperatures in the tropics vary little during the year, and many species have evolved to become thermal specialists. In contrast, a species like a polar bear has to deal with widely varying temperatures during the year — from blustery summers to bitterly frigid winters — so it can’t be nearly so thermally specialized.

In the tropics, the key temperature gradient is associated with elevation. For every thousand meters you go up in elevation, the temperature drops by an average of 6 degrees C (11 degrees F). For this reason, many tropical species exist not just in a narrow temperature range, but at defined elevations. Some creatures are confined to the hot lowlands. Others live at mid-elevations. And still others are specialized for cool, cloudy mountaintops.

As a result of global warming, these tropical mountaintop specialists may be in deep trouble. Because they live on mountains — effectively islands in the sky — their populations are genetically isolated from those in other montane areas, and hence they frequently evolve into unique, locally endemic species. In fact, tropical mountains probably support more restricted endemic species than anywhere else on Earth. As temperatures rise, these mountaintop specialists have nowhere to go. Their populations will wither and shrink and potentially disappear altogether. 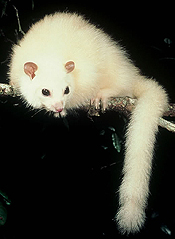 The white lemuroid possum, found only in a single area of Australia, could be wiped out by another heat wave.

The intense vulnerability of tropical mountain species is illustrated by a beautiful Australian animal, the white lemuroid possum (Hemibelideus lemuroides), which is found only in the Mount Lewis area in northern Queensland, in northeast Australia. Living in cool, misty rainforests above 1,100 meters (3,600 feet), this iconic animal was very popular with tourists, who visited Mount Lewis in droves to spy white possums at night with powerful spotlights.

But in late 2005, a severe heat wave hit the region. The white possum vanished. It wasn’t seen by anyone for four years, and many presumed it had disappeared entirely — a victim of global warming. Finally, one of my colleagues at James Cook University, Steve Williams, initiated a massive survey for the possum, searching every nook and cranny of its former range. After an exhaustive effort, Williams’ team finally found four individuals alive in a small pocket of forest. The white possum still survives — barely — but it is evidently just one more heat wave away from oblivion.

Williams and his team are world leaders in studying the impacts of global warming on tropical wildlife, and they have devised sophisticated computer models to project the impacts of rising temperatures on higher-elevation mammals, birds, reptiles, and amphibians in north Queensland rainforests. Their models suggest that species extinctions will increase dramatically if temperatures climb by more than 2 to 3 degrees C. (The Intergovernmental Panel on Climate Change projects a global average temperature rise of 1.4 to 5.8 degrees C by the end of this century.) If temperatures rise by 5 to 6 degrees C, the models suggest, most of the endemic wildlife in north Queensland will be wiped out entirely.

Another likely impact of global warming on the world’s tropical forests is that rising temperatures will elevate the cloud base of tropical mountains, since the condensation point for cloud formation is largely controlled by air temperature. This could have a profound impact on montane rainforests, which need persistent cloud cover to keep them moist, cool, and sheltered from intense solar radiation. Computer models suggest that even an additional 1-degree C rise in temperature could dry out and fragment many high-elevation rainforests in places such as north Queensland, largely as a result of shrinking cloud cover.

As temperatures rise, high-elevation rainforests, as well as those at cooler latitudes, are also likely to suffer from more disease-causing pathogens. These pathogens will affect people as well as wildlife; cool mountainous areas harbor fewer nasty diseases, such as malaria and dengue fever, and thereby tend to support dense human populations. Biologist Alan Pounds argues that the alarming extinctions of nearly a hundred species of endemic Harlequin Frogs in the Andes Mountains of South America — caused by outbreaks of an highly virulent chytrid fungus that may have originated in Africa — are linked to higher temperatures Other scientists disagree, however, arguing that the frog-killing fungus is spreading around the world in a wave-like pattern that has little to do with global warming.

The rate at which forests emit water vapor will likely decline as atmospheric CO2 levels continue to rise.

Another potential impact of global change is that evapotranspiration from forests could decline in the future. Evapotranspiration happens when plants open up the tiny pores on their leaves, called stomates, to take in CO2 from the atmosphere for photosynthesis. This costs the plant water; for every molecule of CO2 that enters the plant, around 180 molecules of water diffuse out of the stomates. This means that dense tropical rainforests, which contain gazillions of leaves and actively photosynthesize year-round, are incredible sources of water vapor. Indeed, around half of the rain that falls on a tropical forest is almost immediately recycled back into the atmosphere.

Because they emit such huge quantities of water vapor, rainforests are effectively giant cloud-making machines. And these clouds are important. They reflect much of the intense solar radiation at tropical latitudes back into outer space — and thereby help to slow global warming. And they are a vital source of rainfall in the tropics, especially in the dry-season months when forests are stressed and vulnerable to fire. Such rainfall-generating effects are especially crucial in the Amazon and Congo Basins, where vast forests dominate the regional hydrology.

The rate at which forests emit water vapor will likely decline as atmospheric CO2 levels continue to rise. Plants won’t need to open their stomates as long to take in CO2, and hence they will pump out less water vapor. That could well mean fewer clouds and less dry-season rainfall in the tropics.

The bottom line, however, is that the magnitude of such changes in an increasingly CO2-rich world isn’t known. It is intriguing, nonetheless, to realize that plants may already be adapting to rising CO2 levels. A recent study in Florida reveals that, as CO2 concentrations have climbed over the last century, the number of stomates in native plant species has fallen by a third.

Although researchers are fairly confident about some of the impacts of warming on tropical forests, we still face huge uncertainties. We are quite certain that intense rainfall events will increase in the future, simply because warm air holds more moisture than cooler air. But even our best computer models don’t tell us where or when such heavy deluges will occur.

Ironically, we could also see more droughts in a warming world. Certain areas of the Amazon rainforest periodically suffer from El Niño-driven droughts, but in 2005 and 2010 we saw intense droughts affecting even the wettest, least drought-prone parts of the basin. These droughts resulted from something completely new to scientists: unusually warm Atlantic sea-surface temperatures, which shifted the rain-bearing inter-tropical convergence zone northward of the Amazon. The resulting droughts killed tens of millions of Amazonian trees, which in turn released billions of tons of CO2 into the atmosphere. Is this a new climatic dynamic for the Amazon? We just don’t know.

Indeed, for any specific location in the tropics, our ability to predict future changes in temperatures — and especially rainfall — is appallingly bad. Different global circulation models, which are our best tools for projecting future climates, often differ wildly — even when run under the exact same hypothetical greenhouse-gas scenarios.

The impacts of future climate change will be worsened by massive habitat loss and destruction.

Scientists are also bitterly divided on whether undisturbed rainforests will grow more massive or shrink in the future. Those who think forests will shrink believe global warming will increase the metabolic rates of plants, since plants tend to burn energy faster when the thermometer rises. This in turn means plants would have less energy for growth, and hence forests will tend to become smaller over time. The forests-will-get-more-massive camp believes rising atmospheric CO2 concentrations are fertilizing plants, spurring them to photosynthesize and grow faster.

The implications of this debate are profound: if rainforests shrink, they could release billions of tons of CO2 to the atmosphere, worsening global warming. If rainforests become bigger, however, then intact forests will help to slow global warming — at least for a while, as they can’t keep getting bigger forever. What all this means is that we still don’t understand one of the most crucial parts of the global carbon cycle.

Two uncertainties scare me the most. The first is that vast expanses of tropical forest exist in marginally dry areas. Around half of the Amazon rainforest, for instance, is already at or near its physiological limits for moisture. For such forests, even small declines in rainfall — especially during the crucial dry-season months — might render them more vulnerable to destructive wildfires. To make matters worse, we are already making forests more fire-prone by logging and fragmenting them — ripping holes in the forest canopy and creating dry, flammable debris on the forest floor. Add to this the hundreds of thousands of fires lit each year by tropical forest colonists and farmers, and you have all the makings for an ecological crisis, especially if the tropics get drier.

Finally, we know that climates have changed in the Earth’s past, and that species have shifted their latitudinal and elevational ranges in response to this. However, even in periods of rapid warming, such as the interglacial periods of the Pleistocene or the Paleocene-Eocene boundary, temperatures rose only at a few percent of the rate happening today. On top of this, the impacts of future climate change will be worsened by massive habitat loss and fragmentation. The synergistic impacts of these combined body blows could well be the greatest of all threats to tropical biodiversity.