Are there any pristine ecosystems out there? The evidence is growing that our ideas about virgin nature are often faulty. In fact, the lush rainforest or wind-blown moorland we think is natural may be a human creation, with alien creatures from distant lands living beside native species. Realizing this will change our ideas about how ecosystems work and how we should do conservation.

We like to think that most nature was pristine and largely untouched until recent times. But two major studies in recent weeks say we are deluded. In one, Erle Ellis, a geographer at the University of Maryland Baltimore County, and colleagues have calculated that at least a fifth of the land across most of the world had been transformed by humans as early as 5,000 years ago — a proportion that past studies of historical land use had assumed was only reached in the past 100 years or so.

The human footprint was huge from the day, perhaps 60,000 years ago, when we began burning grasslands and forests for hunting, according to the Ellis study. It extended further with swidden “slash-and-burn” agriculture, and became more intense when farmers began to domesticate animals and plow the land.

This seems odd given how few we were back then — tens of millions at most — and how primitive our technology was. But, says co-author Steve Vavrus of the University of Wisconsin, “early farmers didn’t need to be as efficient as modern farmers and therefore, counterintuitively, they used much more land per capita.” In other words, they spread out.

As much as a tenth of trees in the Amazon grow on man-made ‘dark earths’ created by pre-Columbian farmers.

In fact, they farmed large areas that today look like virgin forests. But we now know that as much as a tenth of the trees in the Amazon rainforest grow on man-made “dark earths,” or terra preta, which archaeologists believe were created by pre-Columbian farmers who added organic wastes and charcoal to improve nutrient supply and boost yields.

Much of the Amazon, Ellis concludes, is actually forest regrowth. Or — judging by the profusion of fruit trees and other valuable species still growing in terra preta areas — perhaps overgrown gardens.

Other tropical rainforests also seem to have been farmed. In the past couple of years, James Fraser of Lancaster University in England has found dark earths in until-recently forested West Africa. And last year Doug Sheil and colleagues reported similar findings from Borneo. Other studies have found oil-palm nuts over wide areas of the central African jungle, suggesting the place was covered in palm-oil plantations 2,000 years ago.

Nor is this just about rainforests. The bison-grazed plains of North America were remade by Native Americans long before Europeans showed up. Many of the mist-shrouded treeless grasslands of the tropical Andes, known as the paramos, are the result of burning and grazing after locals cut down the natural forests centuries ago. In colder climes, the Scottish highlands tell a similar story.

Just as geographers and archaeologists are hard-pressed to find untouched landscapes, so biologists are having similar trouble locating pristine ecosystems. 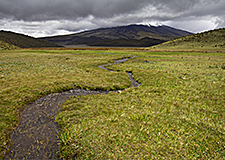 The treeless paramos grasslands in the Andes evolved after forests were cut down centuries ago. STEFFEN FOERSTER

A new book, Novel Ecosystems, edited by Richard Hobbs of the University of Western Australia and others, shows how many superficially natural ecosystems are heavily influenced by the introduction of alien species. Whether intentional or accidental, most introductions seem to have human origins.

This is disconcerting. “Over large parts of the globe, the ‘wilderness’ that people refer back to never existed,” says one of the book’s authors, Michael Perring, also of the University of Western Australia.

Nature has always had open borders for alien species on the move. Those itinerants may have been a driving force of evolution. But human activity has dramatically increased their travel options. We move many deliberately, as commercial crops or domesticated animals, for instance. Today, others can hitch a ride on ship hulls or in ballast tanks, aboard planes or on the wheels of trucks or the backs of domesticated animals. This phenomenon seems to have been going on for much longer than we sometimes imagine.

Conventionally, we regard these unwanted interlopers as a curse, destabilizing ecosystems and devouring indigenous species. Sometimes this is true, as Hobbs and his co-authors acknowledge. But they point out that, in the 21st century, aliens make up a substantial fraction of the planet’s biodiversity, and many are actively useful, even essential parts of ecosystems.

Extinctions caused by new arrivals happen and can sometimes be devastating. The brown tree snake from New Guinea is eating its way through the wildlife of Guam, after arriving on a military plane. The zebra mussel, which came from the Black Sea region in the ballast water of ships, is notorious in the U.S., which returned the favor by inadvertently sending the Black Sea a jellyfish that devastated that ecosystem. But actually, such events are rare. Mostly, invaders swiftly settle down and become model eco-citizens, pollinating crops, spreading seeds, controlling predators, and providing food and habitat for native species. After a while we forget about them, or learn to love them. Where would North American be without the European honeybee?

Usually, invaded ecosystems end up with more species than they had before. Places like New Zealand, Hawaii, even the Galapagos islands — all notorious for species invasions due to human activities — are actually all more biodiverse than before. Ellis calls them “anthropogenic melting pots.”

Scientists who research the invaders and their hosts are discovering much that is intriguing. British researchers recently reported finding two species of native tits that have learned to eat the larvae of a wasp that was introduced to the country from the Middle East 180 years ago and that lays its eggs on the Turkey oak, another introduced species. The tits are spending more and more time in the trees, eating the larvae, especially in spring because climate change means their young now hatch before their previous food source, leaf-eating moth caterpillars appear.

In the new analysis, ecosystems begin to look a lot more accidental and transient than niche theory suggests.

Novel ecosystems are different, but not necessarily worse. San Francisco Bay, for instance, is widely regarded as the most invaded estuary on the planet. But that didn’t stop the U.S. government submitting it in January to the Ramsar Convention as a wetland of international importance, because of is a “key habitat for a broad suite of flora and fauna and a range of ecological services.” Much of its rich biodioversity — and some of its ecological services — is due to its alien species.

Aliens may even contribute to rewilding those parts of the planet we no longer need. In Puerto Rico, abandoned sugarcane fields across half the island have sprouted new forest ecosystems, largely thanks to the invasive power of non-native species such as the African tulip tree, says Ariel Lugo of the International Institute of tropical Forestry. The tulip tree proved attractive to native birds and insects and now, after a few decades, native trees species have started to recover too.

The case that we have to accommodate the alien and novel when trying to conserve nature and restore ecosystems was made by Emma Marris in her 2011 book Rambunctious Garden. But the new analysis goes beyond that simple pragmatism, because it suggests we need to rethink many ideas about how nature works, too.

For instance, it calls into question the conventional view that ecosystems such as rainforests are complex machines, or super-organisms, that have emerged through a long process of co-evolution of species to fill ecological niches. But, if that is so, asks ecologist James Rosindell of Imperial College London, how come alien species are so good at invading other ecosystems, frequently becoming fully integrated neighbors?

‘Change, including rapid and disruptive change, is a natural feature of the world,’ says ecologist Stephen Jackson.

Ecosystems begin to look a lot more accidental, random, and transient than niche theory would suggest. They are constantly being remade by fire and flood, disease, and the arrival of new species. They are a hodgepodge of native and alien species. This fits a rival model for how ecosystems work called “ecological fitting,” first articulated by the legendary U.S. ecologist Daniel Janzen of the University of Pennsylvania. He said that co-evolution is a bit-part player in ecosystems; most of the time, species muddle along and fit in as best they can.

Far from reaching some equilibrium state with niches filled, ecosystems have always been in a constant state of flux, says Stephen Jackson, of the Southwest Climate Science Center in Arizona, in Novel Ecosystems. “Change, including rapid and disruptive change, is a natural feature of the world.” Humans may have dramatically speeded that up, but novelty is the norm.

In that light, we need to look afresh at conservation priorities. Novel ecosystems cannot be dismissed as degraded versions of proper ecosystems, nor can alien species be demonized simply for not belonging. If novelty and change is the norm, Hobbs and colleagues ask, does it make sense for the growing business of ecosystem restoration to try and recreate static historic ecosystems? By doing that, you are not creating a functioning ecosystem; you are creating a museum exhibit that will require constant attention if it is to survive.

Conservationists, others argue, also need to be more positive about the ecological benefits of traditional farming. A widely held view is that we need more intensive industrial farming in order to provide the food the world needs while leaving land for nature. But that assumes farms can have no ecological value. Yet traditional farming methods are often better seen as novel ecosystems rich in biodiversity — havens for wildlife that is worth protecting.

Christian Kull of Monash University in Australia recently called for the protection of novel farming systems that operate within forests, such as the rubber gardens of Indonesia and the cacao farms of Cameroon, which “blur boundaries between human and natural, native and non-native, production and conservation.”

The good news from all this is that nature emerges as resilient and adaptable, able to bounce back from the worst we can throw at it. And that raises a final heretical question. In an era of coming rapid climate change, if any species are going to thrive surely it will be the desperadoes, stowaways, and vagabonds that have been hitching a ride around the world with humans — species that, in some respects, closely resemble us. So if novel is the new normal, should we be encouraging their travels, rather than stopping them at the border?