Those wind turbines endlessly turning on the hill near your home tell of a changing world. So do the fields of solar panels sprouting from the deserts of California to the plains of Germany. But the world is not changing fast enough, says the latest report from the UN Intergovernmental Panel on Climate Change (IPCC).

The 2,000-page study of how to head off climate change, released in Berlin on Sunday, calls for a tripling of the share of global energy generated by low-carbon energy sources. Electricity generation will have to go from its current 30 percent use of low-carbon sources to 80 percent by 2050, the report says. And with today’s main low-carbon sources — nuclear and hydropower — unlikely to grow much, that requires a vastly bigger plug-in to the newcomers, wind and solar. 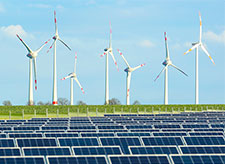 Wind turbines stand behind a solar power park in Germany, which was an early leader in renewable energy investment. GETTY IMAGES

Only that way, says the IPCC, can the world have a better-than-even chance of keeping below the two degrees of warming widely regarded as the danger level.

Crazy? Some believe an industrial world powered by sun and wind is an expensive green dream that is destined to fail. But maybe not. For one thing, the report says, prices of wind and solar energy are falling fast. So the damaging impact of such a transformation on the global economy would be very small — provided we get moving soon.

But for another, we have already gotten started. Only six days before the IPCC report, a little-noticed study emerged from the UN system. The UN Environment Programme revealed that almost half of all new generating capacity added to grids around the world last year was from renewable energy sources, overwhelmingly wind and solar. UNEP’s latest annuaL assessment of investment in renewables found that global installed solar capacity jumped 26 percent during 2013.

The headline-grabbing new IPCC report, published after a final round of drafting involving governments as well as scientists, is the last of three major assessments by the panel of the state of climate change. The first, in September covered how we are influencing planetary climate processes. The second, in March, investigated likely impacts and how we can adapt. The third, issued on Sunday, concentrates on “mitigation” — how to stop it.

The IPCC finds that after two decades of dithering on climate change, we are in dire straits.

The report analyzes 1,200 possible technological, climatic and economic futures published by 31 different research groups. It finds that after two decades of dithering about how to deal with climate change, we are in dire straits. Carbon dioxide emissions from human activity continue to accelerate. They grew by an average of 2.2 percent a year during the first decade of the new century, faster than the 1.3 percent annual average of the previous three decades. Almost half of total anthropogenic emissions of CO2 since 1750 have taken place since 1970.

The reason for the surge is mostly economic growth. As recently as the 1990s, half of the emissions growth was attributable to rising human population. But between 2000 and 2010, notwithstanding the international economic crisis, rising per-capita GDP was almost twice as important. Another factor, the report says, is the growing share of energy provided by coal, the dirtiest of the mainstream fuels. It is now up to a 30 percent share, its highest level since 1969.

The main countervailing factor is the reduced energy intensity of economies. Improving energy efficiency and the declining role of manufacturing mean we need less energy to produce every dollar of GDP. But that is not enough. On current trends, the IPCC finds, emissions will continue to soar and global average temperatures will rise between 2.5 and 7.8 degrees Celsius before the century is out, depending on the pace of economic growth and the sensitivity of the climate system to CO2.

“We need to move away from business as usual,” says the co-chair of the IPCC working group behind the mitigation report, Ottmar Edenhofer of the Potsdam Institute for Climate Impact Research.

The big switch to low-carbon energy has to be largely completed by 2050, the report says.

There is some uncertainty, but the report says that to cap warming at two degrees may require keeping the concentration of CO2 in the atmosphere below 450 parts per million (ppm) in 2100. With levels up from pre-industrial 280 ppm to 400 ppm today, time is short. The big switch to low-carbon energy has to be largely completed by mid-century, the report says, with CO2 emissions brought to between 40 and 70 percent lower than 2010 levels by 2050, then keeping on a downward trend.

By 2050, the report says, virtually all burning of coal must end, unless the resulting CO2 emissions can be captured as they go up the stack and buried underground — a technology not yet developed at scale. The report gives natural gas, including shale gas, a partial exemption in the medium term as a substitute for coal, because it only emits half as much CO2. But eventually its emissions too must be captured, it says.

While it says electricity generation will lead the way in cutting emissions, the report flags other actions, including maintaining forests and soils as natural carbon stores; raising energy efficiency in heating homes and industry; cutting food waste; rolling out electric cars and mass transit; and designing cities that are friendly for walkers and cyclists.

Even with all that, it says, most scenarios predict CO2 concentrations will overshoot 450 ppm. The excess CO2 will have to be soaked up, somehow.

Most likely that will mean massive reforestation plus a combination of energy crops with carbon capture and storage. Under the latter proposal, cited in an IPCC report for the first time, crops would suck up CO2 from the air as they grow and then be burned in power stations to generate energy, after which the resulting CO2 emissions would be captured and buried. So CO2 is moved from the air to the earth, while generating energy — essentially the reverse of burning fossil fuels. The first pilot project, mainly funded by the U.S. Department of Energy, is operating in Illinois.

There are other methods of removing CO2 from the air that were discussed at an IPCC expert meeting on geoengineering in 2011, chaired by Edenhofer. They include seeding the ocean with micronutrients such as iron to encourage it to take up more CO2, and biochar — the burial of biomass in soils. The report recognizes that these technologies are largely untried and carry risks; but it says they may be the only way of keeping global warming below dangerous levels.

The transformation of the global energy system the IPCC seeks is already partly under way.

The report is a wake-up call for UN climate negotiators trying to assemble a road map for cutting emissions. They failed in Copenhagen in 2009 and now hope for a deal in Paris next year, to come into force in 2020. Meantime, some 60 countries have made unilateral commitments on reducing carbon emissions. The IPCC report says these efforts are “consistent” with curtailing warming at three degrees, but fall short of what we need to stay below two degrees. In any case, says Edenhofer, “climate change is a global commons problem. International cooperation is key.”

The good news is that the transformation of the global energy system the IPCC seeks is already partly under way. The bad news is that progress is fragile, and might be reversed.

The UNEP report, compiled by Ulf Moslener of the Frankfurt School of Finance & Management in Germany, found that 44 percent of added electricity generating capacity went into renewables in 2013 — a figure that exceeded 50 percent if direct replacement for existing power stations is excluded. But the dollar investment in renewables fell by 14 percent from 2012, matching a decline in investment for all types of new electricity generating plants, perhaps as a result of slowing economic growth in some major economies.

Maybe more worrying still, Germany — the early leader in the race to run industrial economies on renewables — showed a dramatic 56 percent year-on-year decline in renewables investment in 2013. This coincided with the government responding to fears about high energy prices by paring back the price guarantee system know as feed-in tariffs.

If even Germany can falter, then there can be no certainty that the shift to renewables is unstoppable.

Replacing Germany as the new leader in renewables is China. In 2013, it invested $56 billion in green power — from the wind-swept steppes of Inner Mongolia to the sun-soaked Gobi Desert. Chinese manufacture of photovoltaic panels has driven down costs by 25 percent since 2009. But this may be partly illusory. Industry insiders say there is huge overcapacity in the Chinese solar energy business, leading to dumping at low prices.

Second place on the list of renewables investors went to the U.S. Third came Japan, which upped investment 80 percent as it raced to install solar panels to replace nuclear plants shut after the 2011 Fukushima disaster. Fourth was the U.K. where, despite a Conservative government often seen as hostile to green energy, investment in renewables rose 14 percent, much of it on offshore wind farms.

Investment in biofuels — once the poster child of renewables — fell 26 percent in 2013, to its lowest level since before George W. Bush kick-started the corn-to-ethanol race in the U.S. almost a decade ago.

The draft of the latest report from the Intergovern-mental Panel on Climate Change warns that the world faces serious risks from warming and that the poor are especially vulnerable. But it avoids the kinds of specific forecasts that have sparked controversy in the past.READ MORE

Researchers continue to struggle to develop “second generation” biofuels that they hope will use enzymes to turn cellulose from wood and crop waste into ethanol.

The UNEP report says renewables are currently keeping 1.2 billion tons of carbon dioxide from entering the atmosphere each year, a saving of 2.4 percent. But that, combined with big improvements to energy efficiency, may mark what some are hailing as the beginning of a decoupling of CO2 emissions from economic growth.

The evidence comes from a European study last fall, which found that global CO2 emissions growth in 2012 fell to 1.4 percent, compared with 3.5 percent growth in economic activity. After allowing for the leap year, the figure was adjusted to 1.1 percent. The trend was observed in each of the world’s three largest economies. Helped by shale gas replacing coal, the U.S. cut emissions by 4 percent, despite an economy growing by 2.8 percent. European Union emissions fell by 1.6 percent, much more than the 0.3 percent fall in GDP. Chinese emissions grew only 3 percent while its economy grew 8 percent.

The study’s data came too late for inclusion in the IPCC report, which only looked at 2010 and before. But Greet Janssens-Maenhout of the European Commission’s Joint Research Center, who co-authored the study, said, “It may be the first sign of a more permanent slowdown in the increase in global CO2 emissions, and ultimately declining emissions.” We must hope she is right.