On March 28, for the first time in anybody’s memory, the floodlights surrounding the soaring white shells of the Sydney Opera House were temporarily extinguished, part of Earth Hour, an international event spanning 88 countries and 24 time zones to prompt world leaders to take action on global warming.

Although iconic buildings in Paris, New York, London, and Tokyo were similarly darkened, arguably none of these symbols was as apt as the unnerving black space that suddenly opened on the shores of Sydney’s harbor. Perhaps more than any industrialized nation, Australia is contending with the increasingly dangerous effects of hotter, dryer, and more unpredictable weather patterns — changes that many of the country’s leading scientists and politicians now attribute to shifting weather patterns, at least in part due to climate change.

In February, on the same day that the temperature in Melbourne reached 116° F — the hottest day ever recorded in Australia’s second-largest city — driving winds pushed a catastrophic bushfire across 1,500 square miles of eucalyptus forests in the state of Victoria, destroying 1,800 homes and farms and killing 173 people. That, too, set a record — for the most deaths from a bushfire in Australia’s history. 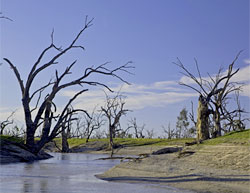 Adelaide and Melbourne are running out of water. The Murray-Darling Basin, Australia’s prime food-growing region, is in the 12th year of a devastating drought that is putting the country’s ability to feed itself in question. The 400,000-square-mile basin, larger than France and Germany combined, has been so dry that the 1-million ton-rice crop was decimated last year, and production of wheat, lambs, and cotton are in significant decline.

The slowly unfolding drought in the country’s south, coupled with this summer’s heat wave and fires in Victoria, have left many Australians wondering whether these natural disasters are a taste of what life will be like in a warming world. In the aftermath of the Victoria fires, the state’s premier, John Brumby, joined John Connor, the chief executive of the Climate Institute — a respected Australian research group — in describing the disaster as “fires of climate change.”

Concerned that steadily rising temperatures in south Australia and the recent drought signal a permanent climate shift, a majority of the country’s states have taken the unprecedented step of agreeing to let the central government play the dominant role in managing local water resources. Growing fears of a lasting change in climate patterns has helped generate support for major public works projects to deal with water scarcity. Australia’s 2007 national election, which saw the Progressive Party come to power, was the first national election in the country’s history in which a scientific issue — climate change — played a decisive role.

“It’s testing our people,” said John Williams, the former chief of Land and Water for the Commonwealth Scientific and Industrial Research Organisation (CSIRO), the country’s premier scientific agency. “These new conditions are forcing people to move out of industries. There are many people making decisions to change radically the nature of their business. There are some industries — rice growing, cotton production — that are just failing and falling away.”

To be sure, some of Australia’s climatologists assert that such extreme events are a normal part of the country’s diabolical weather. Australia is the driest inhabited continent on earth and is accustomed to long periods of dry weather and dangerous fires.

“It is fashionable to promote climate change as being a contributor to changing fire frequency and intensity,” William Kininmonth, the former head of Australia’s National Climate Centre, said in a recent article in The Age. “The pattern of rainfall over the past century does not point to a trend of reduction in rainfall. Nor has any link been offered between global temperature trends and the meteorology of Victorian heat waves.”

But CSIRO disputes Kininmonth’s conclusions. A study last year by the organization found that as atmospheric carbon dioxide concentrations have risen, southern Australia has warmed 1.6° F since 1950. On average, 15 percent less rain falls now in the region. If present trends continue, rainfall will continue to diminish, said the study, and the temperature will be 4.4° F warmer by 2050.

Australian scientists believe that warmer Indian Ocean waters are causing shifts in oceanic and air circulation that create a so-called positive Indian Ocean “dipole.” That phenomenon, which has intensified in recent years, means warmer waters to the west of Australia, and cool waters to the north, funnel drier air over southern Australia, said Caroline C. Ummenhofer, a research fellow at the University of New South Wales Climate Change Research Center.

Many of Australia’s citizens, meanwhile, are increasingly convinced that the country’s run of unusually hot and dry weather signals changes that go beyond normal fluctuations in weather and presage a new climate regime. Just ask Greg Ogle, a 49-year-old conservationist from New South Wales who once farmed the northern banks of the Murray River north of Melbourne. Ogle came of age in the 1970s when regular floods filled the wetlands near his home and the centuries-old red gum trees — a species as iconic to Australians as maples and oaks are to Americans — provided nests for snakes and the small mammals they hunted. It was common then, he said, to see big Goanna monitor lizards — stout as logs and nearly as long as a man is tall — resting on the thick branches of the towering trees.

Australians wonder whether the unfolding drought, the heat wave, and fires are a taste of life in a warming world.

Today red gums are dying all across southern Australia. Frogs and snakes and small mammals are gone, and Goannas are rarely seen. Ninety percent of the wetlands in the Murray-Darling basin have disappeared or have been seriously damaged, according to reports by the CSIRO. Poisonous bacterial blooms, like one that covered nearly 700 miles of the Darling River in 1990 and 1991, are an ever-present danger. The lengthy drought is behind these changes, disrupting the natural cycle of regular flooding that once sustained thousands of square miles of wetland and floodplain.

“I see vast changes just in my lifetime,” said Ogle, who switched careers and is now a conservationist with Trust for Nature, Australia’s oldest and largest land conservancy. “It’s very alarming. We aren’t a long-lived species, and to see these changes in a lifetime is quite distressing. We can actually see several species that disappeared. We’ve watched wetlands die. The alarming thing about it all is the snowballing effect of those changes. A lot of it is yet to come.”

Such concerns have led to a pronounced change in the way the Australian public views climate change. Perhaps the most visible evidence came in the 2007 national election when Australians voted decisively to replace the 11-year-old conservative government, which resisted the findings of new climate science, with a socially progressive government that promised action to reduce global warming. The election was widely seen as hinging on the progressive party’s ability to successfully communicate their concerns about climate change issues.

The winner of the election, Prime Minister Kevin Rudd, last year set a target of cutting CO2 emissions 5 percent by 2020, with possible reductions of 15 percent if a new international global climate change agreement is reached. Green groups called the goal too weak, but it nevertheless represents a turnabout from the years of inaction by former Prime Minister John Howard, an ally of President George W. Bush.

The conviction among many national and state officials that climate change is behind record dry conditions across much of the country has prompted a number of breakthrough policy changes. Last year, for example, four of the country’s six states agreed to let the Commonwealth take the lead in deciding how to manage an ever-scarcer supply of water. It was the first time since Australia’s water management laws and practices went into effect in the late 19th century that states gave the national government the authority to determine how much water is distributed and to whom. 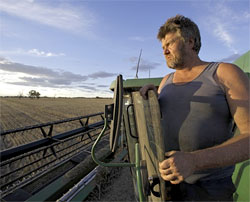 In exchange, the Rudd government last year committed U.S. $9 billion to secure the country’s supply of fresh water for cities, agriculture, and the environment, much of the money to rework a vast and leaky irrigation network in the Murray-Darling Basin that wastes roughly as much water as it delivers to farmers. Those funds, coupled with U.S. $3 billion more from the states of Melbourne and Victoria, will also be used to build new desalination plants and to change planting patterns in order to secure the nation’s fresh water supply. With the web of irrigation canals and channels steadily shrinking, large tracts of land that once received ample water will either lie fallow or be planted in dryland wheat or other crops. Hundreds of rice paddies that were once flooded eight inches deep are being converted to dryland wheat. Dairy farmers are installing finger-thick plastic pipes to drip-irrigate their alfalfa crop.

The need for a more rigorous response to climate change in Australia is urgent. In 2005, and again in 2007, CSIRO participated in studies that warned that Australia’s warmer and drier weather would significantly increase the incidence and severity of wildfire. Southeast Australia, where the landscape is dominated by fast-burning eucalyptus species — and where hundreds of thousands of people live in semi-rural communities — is particularly vulnerable. The 2007 CSIRO study said there could be up to 65 percent more “extreme” fire-danger days compared with 1990, and that by 2050 — under the most severe warming scenarios — there could be a 300 percent increase in fire danger.

Then, virtually on cue, came the Feb. 7 bush fire. As awful as it was, the curtain of flame that roared across Victoria on Black Saturday was one more facet of the growing environmental emergency in southeast Australia, where natural systems already were under extreme stress.

The Murray River and its tributaries water a vital agricultural region in which 60,000 growers produce U.S. $30 billion in crops annually. Yet today, reservoirs and storage basins are less than half full. On 4 out of 10 days, the river doesn’t have enough flow to reach its mouth in the Southern Ocean near Adelaide.

Another particularly grim aspect of the region’s “Big Dry” is that the bottoms of the lakes and wetlands at the end of the Murray, including Lake Alexandrina and Lake Albert, are now exposed to air. Sulfides exist in the sediment, and when oxygen from the atmosphere mixes with the mud, sulfuric acid forms. “Acid mud,” as its known in Australia, is contaminating water farther upstream along the Murray and Darling rivers, driving out native fish and aquatic birds and potentially contaminating a major source of drinking water for Adelaide.

A few miles from where Greg Ogle lives with his wife and two boys in a New South Wales ranch house surrounded by miles of uninhabited Australian bush, the evidence of a markedly changed natural system is readily apparent. A wetland that two decades ago was inundated by its last great flood is now dry. A nearby lake, which 20 years ago was deep enough to swim in and large enough for water-skiing, is empty. Saltbushes and other arid species are replacing the red gums.

This is a far different world from the one in which Ogle was raised, and from his vantage point, it is not a better place.