After decades in the doldrums, food prices have been soaring this year, causing more misery for the world’s poor than any credit crunch. The geopolitical shockwaves have spread round the world, with food riots in Haiti, strikes over rice shortages in Bangladesh, tortilla wars in Mexico, and protests over bread prices in Egypt.

The immediate cause is declining grain stocks, which have encouraged speculators, hoarders, and panic-buyers. But what are the underlying trends that have sown the seeds for this perfect food storm?

Biofuels are part of it, clearly. A quarter of U.S. corn is now converted to ethanol, powering vehicles rather than filling stomachs or fattening livestock. And the rising oil prices that encouraged the biofuels boom are also raising food prices by making fertilizer, pesticides, and transport more expensive.

But there is something else going on that has hardly been mentioned, and that some believe is the great slow-burning, and hopelessly underreported, resource crisis of the 21st century: water.

Climate change, overconsumption and the alarmingly inefficient use of this most basic raw material are all to blame. I wrote a book three years ago titled When The Rivers Run Dry. It probed why the Yellow River in China, the Rio Grande and Colorado in the United States, the Nile in Egypt, the Indus in Pakistan, the Amu Darya in Central Asia, and many others are all running on empty. The confident blue lines in a million atlases simply do not tell the truth about rivers sucked dry, for the most part, to irrigate food crops.

We are using these rivers to death. And we are also pumping out underground water reserves almost everywhere in the world. With two-thirds of the water abstracted from nature going to irrigate crops — a figure that rises above 90 percent in many arid countries — water shortages equal food shortages.

Consider the two underlying causes of the current crisis over world food prices: falling supplies from some of the major agricultural regions that supply world markets, and rising demand in booming economies like China and India.

Why falling supplies? Farm yields per hectare have been stagnating in many countries for a while now. The green revolution that caused yields to soar 20 years ago may be faltering. But the immediate trigger, according to most analysts, has been droughts, particularly in Australia, one of the world’s largest grain exporters, but also in some other major suppliers, like Ukraine. Australia’s wheat exports were 60 percent down last year; its rice exports were 90 percent down.

Why rising demand? China has received most of the blame here — its growing wealth is certainly raising demand, especially as richer citizens eat more meat. But China traditionally has always fed itself — what’s different now is that the world’s most populous country is no longer able to produce all its own food.

A few years ago, the American agronomist and environmentalist Lester Brown wrote a book called Who Will Feed China?: Wake Up Call for a Small Planet. It predicted just this. China can no longer feed itself largely because demand is rising sharply at a time when every last drop of water in the north of the country, its major breadbasket, is already taken. The Yellow River, which drains most of the region, now rarely reaches the sea, except for the short monsoon season. 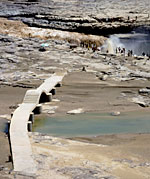 China’s once-great Yellow River often no longer reaches the sea, as much of it is drawn off for power and agriculture. FRED PEARCE

Some press reports have recently suggested that China is being sucked dry to provide water for the Beijing Olympics. Would that it were so simple. The Olympics will require only trivial amounts of water. China’s water shortages are deep-seated, escalating, and tied to agriculture. Even hugely expensive plans to bring water from the wetter south to the arid north will only provide marginal relief.

The same is true of India, the world’s second most populous country. Forty years ago, India was a basket case. Millions died in famines. The green revolution then turned India into a food exporter. Its neighbor Bangladesh came to rely on India for rice. But Indian food production has stagnated recently, even as demand from richer residents has soared. And the main reason is water. 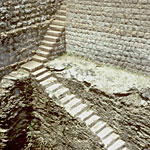 Even this elaborate hand-dug well in the Indian state of Tamil Nadu is dry, a result of over-pumping the underground aquifers. FRED PEARCE

Underground water is pumped for irrigation in Bengal, India, a practice that is increasing as surface water dries up. FRED PEARCE

With river water fully used, Indian farmers have been trying to increase supplies by tapping underground reserves. In the last 15 years, they have bought a staggering 20 million Yamaha pumps to suck water from beneath their fields. Tushaar Shah, director of the International Water Management Institute’s groundwater research station in Gujarat, estimates those farmers are pumping annually to the surface 100 cubic kilometers more water than the monsoon rains replace. Water tables are plunging, and in many places water supplies are giving out.

“We are living hand-to-mouth,” says D.P. Singh, president of the All India Grain Exporters Association, who blames water shortages for faltering grain production. Last year India began to import rice, notably from Australia. This year, it stopped supplying its densely populated neighbor Bangladesh, triggering a crisis there too.

A map of world food trade increasingly looks like a map of the water haves and have-nots, because in recent years the global food trade has become almost a proxy trade in water — or rather, the water needed to grow food. “Virtual water,” some economists call it. The trade has kept the hungry in dry lands fed. But now that system is breaking down, because there are too many buyers and not enough sellers.

According to estimates by UNESCO’s hydrology institute, the world’s largest net supplier of virtual water until recently was Australia. It exported a staggering 70 cubic kilometers of water a year in the form of crops, mainly food. With the Murray-Darling Basin, Australia’s main farming zone, virtually dry for the past two years, that figure has been cut in half.

The largest gross exporter of virtual water is the United States, but its exports have also slumped as corn is diverted to domestic biofuels, and because of continuing drought in the American West.

The current water shortages should not mark an absolute limit to food production around the world. But it should do three things. It should encourage a rethinking of biofuels, which are themselves major water guzzlers. It should prompt an expanding trade in food exported from countries that remain in water surplus, such as Brazil. And it should trigger much greater efforts everywhere to use water more efficiently.

On a trip to Australia in the midst of the 2006 drought, I was staggered to see that farmers even in the most arid areas still irrigate their fields mostly by flooding them. Until the water runs out, that is. Few have adopted much more efficient drip irrigation systems, where water is delivered down pipes and discharged close to roots. And, while many farmers are expert at collecting any rain that falls on their land, they sometimes allow half of that water to evaporate from the surfaces of their farm reservoirs.

For too long, we have seen water as a cheap and unlimited resource. Those days are coming to an end — not just in dry places, but everywhere. For if the current world food crisis shows anything, it is that in an era of global trade in “virtual water,” local water shortages can reverberate throughout the world — creating higher food prices and food shortages everywhere.