Fifty years ago, English wine was something of a national joke. “Wine making was for the very eccentric. It was drunk as a curiosity and often spat out,” says Richard Selley, Emeritus Professor of Geology at Imperial College, London and author of the book The Winelands of Britain. Wine has been made in Britain since the Romans imported it 2000 years ago. But production declined starting in the 17th century, due in part to cooling temperatures, and all but disappeared after World War I. Modern England’s chilly, rainy climate didn’t provide the minimal number of days of warmth and sunlight that even cooler-weather grapes need to ripen properly and make a commercial product.

Then came climate change. Between 1961 and 2006, temperatures in southern England increased an average of 3 degrees Fahrenheit. English wine came roaring back.

Today, there are about 400 commercial vineyards. English sparkling wines are beating their French rivals in international competitions. “We’ve noticed the climate has improved consistently. The weather has improved, the ripening period has become longer, and year after year we’re getting quality fruit,” says Chris White, the general manager of the Denbies Wine Estate in Dorking, England’s largest vineyard at 265 acres. Denbies is anticipating an even warmer future. In 2010 it planted seven acres of Sauvignon Blanc vines, a grape originating from the warmer Bordeaux region of France.

A French winemaker says over the last 25 years his harvests have moved from late October to early September.

Few products are more sensitive to changes in temperature than wine. So the rising temperatures and associated with climate change are already reshaping the industry. Production as a whole is moving north (or south in the southern hemisphere) as opportunities open up in once-inhospitable areas. Meanwhile, vineyards in warmer climates are facing mounting problems as it gets hotter. Assuming projections of much hotter world prove true in the next 50 to 100 years, many winemakers will be forced to change their signature products, move, or go under. Many will go under no matter what they do.

Scientists have been analyzing the influence of climate and weather on wine since long before global warming became an issue. Over the past two decades, dozens of studies have mapped the emerging impacts of warming temperatures on vineyards in Europe, the Americas, Australia and elsewhere, and modeled the possible effects over the next 100 years. They paint a picture of accelerating change unlike anything seen before.

“If we look at the best data we have — there’s some data that goes back 500 or so years, and some paleoclimate stuff going back much further — on balance, changes underway today are as big or bigger than anything in those records,” says Gregory V. Jones, a climatologist at the University of Southern Oregon who specializes in climate’s effects on wine.

The wine industry’s early encounter with climate change is a window on the upheavals global agriculture will face over the coming century. It shows how even modest temperature and weather changes can have effects that reverberate through crop yields, business strategies, and economies — and on into culture, traditions, and even the subtle flavors that define national identities. 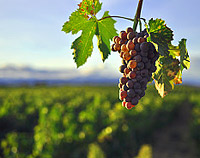 Flickr/Capelle.r
A vineyard in Cevennes, France.

So far, interestingly, rising temperatures have been mostly good for wine. A 2005 study led by Jones found that the average growing-season temperature in 27 prime wine-producing regions around the world had risen 2.3 degrees Fahrenheit in the previous 50 years. In the vineyards of Spain, Portugal, southern France, and parts of California and Washington state, it rose a dramatic 4.5 degrees. But Jones also found that, in general, wine quality ratings rose with the temperature.

French wine maker Philippe Bardet who produces Merlot, Cabernet Sauvingon and Cabernet Franc grapes in the Bordeaux region, says that over the past 25 years his harvests have moved from late October to the beginning of September as grapes ripen ever faster. Concerned that this may be affecting the wine, Bardet has tried planting different, slower-ripening grape varieties to push it back. In fact, Jones, in his study, found that some warmer regions were already reaching a heat threshold beyond which quality began to decline.

In Spain, changes are now coming rapidly, says Miguel Torres, the president of Bodegas Torres, the country’s largest winemaker, headquartered in Catalonia. “In the last four years, temperatures have increased 1 degree [Celsius] in the vineyards,” he says. “The quality has not changed so far. Our concern is for the future. They say the temperature could go up 2 degrees — or 5 degrees. So we are moving vineyards from sea level to central valley, and from central valley to mountain areas.” Ten years ago, Bodegas Torres began planting vines at vineyards in the Pre-Pyrenees mountain range at an elevation of 1,000 meters as a hedge against climate climate change.

Some regions will become inhospitable to winemaking, while new areas will continually open up.

Another looming problem lies not in the vines, but culture and tradition. In many European countries including Spain, Portugal, France, and Italy, wine production is governed by “appellation” systems that tie specific wines to their geographical locations. This is based on the concept of terroir, a French term that ascribes a wine’s uniqueness to the soil, landscape, climate, and viticulture practices of the place where it’s produced. A genuine French Sauvignon Blanc must come from Bordeaux, for instance. But as temperatures climb, it will get increasingly difficult to grow the “right” grapes.

Another study by Jones projected that by 2049, Bordeaux will have reached the upper temperature limits for growing red varieties and will be outside the ideal climate for its white grapes. No more Sauvignon Blanc. The appellation system will put growers in impossible situations — even as it disintegrates.

“Climate change will affect Europe more than other places,” Torres says. “The map of the European appellations will have a dramatic change. If there is a change of 2 or 3 more degrees, where do you place a Burgundy, or a Rioja? What are you going to do? In places like Chile or Argentina, in the Southern hemisphere, you can still go south. Here in Europe, we are demarcated by appellation of origin. If you are from Rioja, the grapes have to come from Rioja.”

For the global wine industry as a whole, the challenge is not merely warmer temperatures, but the oncoming, unending rush of change. Another study by Jones projected that the geographical bands suitable for winemaking would shift on average between 170 and 340 miles toward either pole in the next hundred years — a geographically small yet momentous shift. Some regions will become inhospitable to winemaking. Others will have to keep swapping in new varietals. And new frontiers will continually open up.

“If that ground is the best in the world for Pinot Noir, will it be the best for something else?” Jones says. “If Burgundy warms to the point where Pinot Noir and Chablis are not longer the best grapes for that region, will people buy a new product? ”¦ At some point a grower in a region that has become too warm has to make a decision. It’s like if you’re selling widgets, and widgets don’t sell anymore, what do you do? You have to come up with widgets 2.0.”

In North America, there’s no 1,000-year tradition of winemaking, so such transitions may not be as difficult. “Emerging regions in the U.S. are trying to grapple with what is the best variety,” says Tyler Colman, who writes the Dr. Vino wine blog.

A study suggests higher temperatures could end up shrinking Northern California’s prime vineyards by half.

“Long Island, for example. It [the wine industry] has been there only 30 years. They went with reds and thought Merlot was their calling card. But now they’re trying white wines.”

But heat is still heat. A recent climate model co-authored by Stanford climatologist Noah Diffenbaugh, Jones and two other scientists suggested that rising temperatures could end up shrinking Northern California’s prime vineyards by half over the next 30 years.

Such dire projections have become a sensitive issue; the Napa Valley Vintners, the wine industry trade association, commissioned a scientific temperature survey to demonstrate that the effects of climate change were being exaggerated. “The results, overall, provide good short-term news that consumers are not ‘tasting’ climate change in Napa Valley wines,” the association said earlier this year. However, the study did show that temperatures had risen an average of 1 to 2 degrees, mostly at night from January to August — a change that Jones says could indeed affect the taste of wines.

Even in Oregon, where the wine industry is expected to benefit from warmer temperatures, climate change is viewed with a mixture of anticipation and dread. Vintners point out that weather is variable — the past few years have been cool and wet — and that climate change is expected to bring more extreme weather events. “It’s a much more complex picture than, ‘on average temperatures are rising.’ If they rise at the wrong time or if weather patterns disrupt the growing season, then the increased degree days are not going to help,” says Don Crank, a winemaker at Willamette Valley Vineyards in Turner, Oregon. Climate change is expected to put other stresses on vineyards as well, including pests and rising competition for fresh water.

Yet Diffenbaugh’s study also suggested that it’s possible to make viticulture far more adaptable, preserving some vineyards and traditional grapes, even as the temperature rises. “We know growers can use pruning practices to increase shading. The orientation of the vines on a given piece of land can help reduce excess heat. Irrigation and trellising practices can be used to cool the plants,” Diffenbaugh says.

Tara Holland, an environmental scientist at the University of Guelph in Ontario, Canada, is studying the ability of vintners to adapt to the demands of a changing climate, focusing on the emerging, 10-year-old wine industry in Prince Edward County near the northeastern end of Lake Ontario. There, Holland says, freezing temperatures are currently a problem: vintners must bury vines in the winter. If frost threatens the growing season, they now have to light fires and set up fans to blow smoke through the vineyards to create a warming thermal inversion. So winemakers in Prince Edward County are eagerly anticipating more warming.

Still, one of the principal problems wine makers everywhere will face is basic biology: Vines typically take several years to mature and then produce grapes for decades. Replacing them is both a disruption and a major investment. “I hear all the time, if the temperature goes up, it’s great, we’ll plant Shiraz,” Holland says. “But once you plant a vine, it’s in the ground for 50 years. It’s not an adaptation that’s really possible if you have all your fields planted.”

But overall, Jones says, there’s reason for optimism because the world is a big place, with many potentially suitable sites for vineyards. “Where there is cash involved, people will make it happen,” he says. “Whether they make it happen historically as we’ve known it, or relative to some new system in the future, remains to be seen.”

If the temperature increase is catastrophically extreme, though, all bets are off. “If by 2080 it’s too hot to make wine in southern England, what’s the rest of Europe going to look like?” asked Selley, the British author. “You’ll have to switch to making palm wine.”