In a mere half-century, the number of people on the planet has soared from 3 billion to 7 billion, placing us squarely in the midst of the most rapid expansion of world population in our 50,000-year history — and placing ever-growing pressure on the Earth and its resources.

But that is the past. What of the future? Leading demographers, including those at the United Nations and the U.S. Census Bureau, are projecting that world population will peak at 9.5 billion to 10 billion later this century and then gradually decline as poorer countries develop. But what if those projections are too optimistic? What if population continues to soar, as it has in recent decades, and the world becomes home to 12 billion or even 16 billion people by 2100, as a high-end UN estimate has projected? Such an outcome would clearly have enormous social and environmental implications, including placing enormous stress on the world’s food and water resources, spurring further loss of wild lands and biodiversity, and hastening the degradation of the natural systems that support life on Earth.

Population estimates have assumed the developing world will follow the path of the industrialized world.

It is customary in the popular media and in many journal articles to cite a projected population figure as if it were a given, a figure so certain that it could virtually be used for long-range planning purposes. But we must carefully examine the assumptions behind such projections. And forecasts that population is going to level off or decline this century have been based on the assumption that the developing world will necessarily follow thepath of the industrialized world. That is far from a sure bet.

Eyeing the future, conservationists have clung to the notion that population will peak and then start to decline later this century. Renowned evolutionary biologist Edward O. Wilson has propounded what he terms the bottleneck theory: that maximum pressure on the natural world will occur this century as human population peaks, after which a declining human population will supposedly ease that pressure. The goal of conservation is therefore to help as much of nature as possible squeeze through this population bottleneck. But what if there is no bottleneck, but rather a long tunnel where the human species continues to multiply?

Population projections most often use a pattern of demographic change called the demographic transition. This model is based on the way in which high birth and death rates changed over the centuries in Europe, declining to the low birth and death rates of today. Thus, projections assume that the European experience will be replicated in developing countries. These projections take for granted three key things about fertility in developing countries. First, that it will continue to decline where it has begun to decline, and will begin to decline where it has not. Second, that the decline will be smooth and uninterrupted. And, finally, that it will decline to two children or less per woman.

These are levels now found in Europe and North America. But will such low levels find favor in the Nigerias, Pakistans, and Zambias of this world? The desire for more than two children — often many more than two — will remain an obstacle and will challenge assumptions that world population will level off or decline. 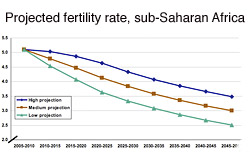 In quite a few developing countries, birth rates are declining significantly. But in others they are not. In Jordan, for example, the fertility rate still hovers around 4 children per woman. Indonesia was a country that was widely acknowledged for its innovative and steadfastly pursued family planning program in the 1980s, when its total fertility rate fell to 3 children per woman. It has been hovering for some time around 2.5. In a recent survey, about 30 percent of women with 2 living children said that they wanted another child. That figure was 35 percent for their husbands.

Countries such as Congo, Kenya, Madagascar, and Rwanda have identified rapid population growth as a problem and committed sufficient resources to address it. Yet their fertility rates remain at 4.6 to 4.7 children per woman, and a future halt in fertility decline in those countries would surprise no one. But most future population projections assume a continuing decline.

What will it take to reach inaccessible rural populations, whose ideal number of children is quite high?

Often fertility rates might decline from a higher level and then “stall” for a time, not continuing their downward trajectories to the two-child family, resulting in a higher-than-projected population. In sub-Saharan Africa, this has happened in Nigeria, where the fertility rate has stalled at about 5.7, and in Ghana, where the fertility rate is 4.1 and apparently resuming a slow decline. Very recent surveys have shown that fertility decline in Senegal has likely stalled at 5.0 children and has risen somewhat to 4.1 in Zimbabwe. Clearly, not all countries will see a continuous decline in fertility rates, and some have barely begun to drop, meaning that projected population sizes will turn out to be too low.

Fertility rates are lowest among educated, urban women who account for much of the initial decrease. What will it take to reach large, often inaccessible rural populations, whose desire to limit family size is frequently quite limited and whose “ideal” number of children is quite high? Challenges include: the logistical task of providing reproductive health services to women; informing them of their ability to limit their number of children and to space births over at least two years; low levels of literacy; the value husbands place on large families; and securing funding for family planning programs.

India provides another cautionary tale. The country is often hailed as an emerging economic power, yet 930 million people — three-quarters of India’s population — live on less than $2 per day. Some advanced Indian states, such as Kerala and Tamil Nadu, have excellent family planning programs and fertility rates of 1.8 children per woman, which will lead to declining populations in those states. But some of India’s poorest and most populous states — Bihar, Madhya Pradesh, Rajasthan, Uttar Pradesh — have total fertility rates ranging from 3.3 to 3.9. The Indian example illustrates an important trend: that the challenge of soaring populations will increasingly be concentrated in the poorest countries, and in the poorest regions of nations such as India.

The challenge of soaring populations will increasingly be concentrated in the poorest countries.

The real possibility of fertility decline stopping before the two-children level is reached requires demographers, policy makers, and environmentalists to seriously consider that population growth in the coming century will come in at the high end of demographic projections. The UN’s middle-of-the-road assumption for sub-Saharan Africa — that fertility rates will drop to 3.0 and population reach 2 billion by 2050 — seem unrealistically low to me. More likely is the UN’s high-end projection that sub-Saharan Africa’s population will climb to 2.2 billion by 2050 and then continue to 4.8 billion by 2100. The dire consequences of such an increase are difficult to ponder. If sub-Saharan Africa is having trouble feeding and providing water to 880 million people today, what will the region be like in 90 years if the population increases five-fold — particularly if, as projected, temperatures rise by 2 to 3 degrees C, worsening droughts?

Many factors may arise to cause fertility rates to drop in countries where the decline has lagged. A rising age at marriage, perhaps resulting from increased education of females and from their increased autonomy; rising expectations among parents that their children can have a better life; decreasing availability of land, forcing migration to cities to seek some source of income; real commitment from governments to provide family planning services and the funds to do so. The list goes on.

But we must face facts. The assumption that all developing countries will see their birth rates decline to the low levels now prevalent in Europe is very far from certain. We can also expect the large majority of population growth to be in countries and areas with the highest poverty and lowest levels of education. Today, the challenge to improve living conditions is often not being met, even as the numbers in need continue to grow.

As populations continue to rise rapidly in these areas, the ability to supply clean water for drinking and sustainable water for agriculture, to provide the most basic health services, and to avoid deforestation and profound environmental consequences, lies in the balance.