The first reports of a mysterious snake-killing disease came from Florida. In the winter of 1997, researchers conducting a survey of Lake Woodruff National Wildlife Refuge, west of Daytona Beach, found nine dusky pygmy rattlesnakes with lesions on their skin, eyes, and mouths. In a routine survey not long afterward, researchers found two ribbon snakes and a garter snake that were similarly afflicted. Some of the snakes were already dead; the rest appeared to be heading in that direction. The researchers brought three of the pygmy snakes into the lab, cut off their heads, and sampled their organs. They decided that the lesions had been caused by some kind of fungal pathogen, though they couldn’t determine exactly what that pathogen was.


Since that first report, cases of what’s become known as Snake Fungal Disease, or SFD, have been confirmed in nine states, including New York, New Jersey, and Massachusetts. The disease has been documented as far west as Minnesota and as far north as New Hampshire. (Between 2006 and 2007, it killed off something like half of New Hampshire’s only remaining population of timber rattlesnakes.) The fungus responsible for the disease has been identified as Ophidiomyces ophiodiicola, which is sometimes shortened to Oo, and recent research has shown that it injures snakes by eating away at the keratin in their scales. Oo isn’t choosy about its victims; it affects more than a dozen different species, from the pygmy and the timber rattlesnakes to milk snakes. It also gets along fine without snakes and can survive for long periods in the soil.


“It’s having a pretty significant impact on some populations,” Matthew Allender, a professor at the University of Illinois at Urbana-Champaign’s veterinary school and the lead author on a recent paper on the etiology of SFD, said. For snakes infected with SFD, Allender noted, mortality rates can approach 90 percent. 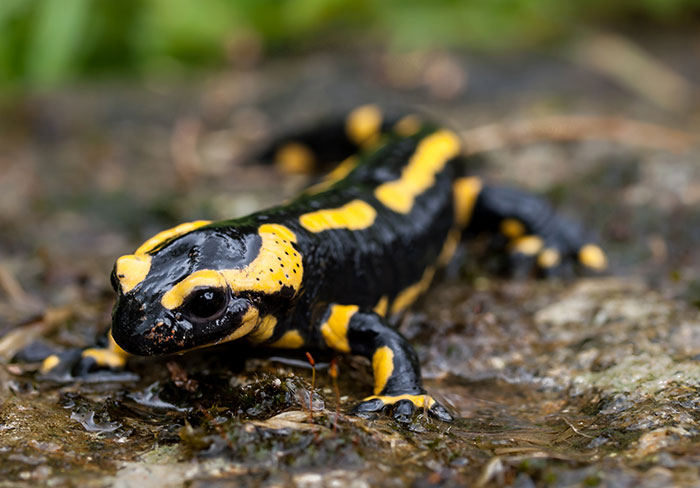 The devastating effects of the Bsal fungus were first noted in fire salamander populations in the Netherlands in 2010. WILLIAM WARBY/FLICKR

SFD would be a concern all on its own. But perhaps even more worrisome is the pattern it seems to fit. SFD is another entry on a list of emerging fungal infections that are decimating whole groups of animals. Other diseases on the list include: Batrachochytrium dendrobatidis, or Bd, which has produced population crashes in dozens of species of frogs from Central America to Australia; Batrachochytrium salamandrivorans, or Bsal, which has practically wiped out some salamander populations in Europe; and Pseudogymnoascus destructans, commonly known as White Nose Syndrome, which has killed off millions of bats in the northeastern United States.


Writing in the journal Nature, a group of British and American scientists described these and other fungal infections as an “unprecedented” wave. It is, they said, responsible for “some of the most severe die-offs and extinctions ever witnessed in wild species.”


Fungi posses several traits that make them highly effective pathogens. One is they reproduce at a fantastic rate. A single spore case of Rhizopus stolonifer, the fungus commonly known as bread mold, can contain 50,000 spores. Each of these has the potential to, within a couple of days, produce 50,000 more spores.


Another is that they generally do not need a live host to survive. Fungi can feed of the dead, and their spores can remain viable for years — possibly decades or even centuries.


“They’re very persistent in the environment,” Matthew Fisher, a professor of fungal epidemiology at Imperial College in London and the lead author of the Nature paper, said. “So they’re able to survive as dormant stages basically forever.”


Third, they tend, like Oo, to be generalists. Bd, for instance, is known to infect more than 500 species of amphibians. (Bd has been described as “the worst infectious disease ever recorded among vertebrates in terms of the number of species impacted,”
and it’s been implicated in the drastic decline or disappearance of at least 200 species.) Phytophthora ramorum, the fungal-like organism that causes sudden oak death, infects more than 100 species of trees. As the Nature article observed, “Broad host ranges twinned with high virulence can be a lethal combination.”

Because fungi don’t need a host to survive, they may be particularly well-suited to intercontinental travel.

Still, the question arises: why now? Why are we seeing a growing number of fungal diseases of wildlife? Experts offer two possible explanations, both of which may be valid.


The first is the increase in global trade and global travel. Between 1990 and 2013, the tonnage of cargo transported in ships more than doubled, to over 9 billion metric tons. During that same time, passenger air travel tripled, to more than 3 trillion passenger miles. As the sheer volume of global trade and global travel rises, so, too, do the number of opportunities for pathogens of all sorts to disperse. Because fungi don’t need a host to survive, they may be particularly well-suited to intercontinental travel. And when a pathogen is let loose in a new place, the results can be spectacularly deadly.


“We’re just moving more things,” said Jeffrey Lorch, a microbiologist at the U.S. Geological Survey’s National Wildlife Health Center in Madison, Wisconsin. “And even though there might be a little bit more regulation than there was previously, you can’t screen everything thoroughly to make sure there’s no pathogen on it, especially when we don’t even know that something is a pathogen. So that’s a big factor.”


The movement of goods and people almost certainly played a role in several of the recent fungal disease outbreaks. White Nose Syndrome was first observed in upstate New York in the winter of 2006. It spread from there in a classic bull’s eye pattern; by 2015 it had been detected in 25 states and five Canadian provinces. Genetic analysis has traced the fungus back to Europe. (European bats, which presumably co-evolved with the fungus, seem not to be affected by it.) No one knows exactly how the fungus got to New York; it could have been transported in soil, or perhaps on some unsuspecting tourist’s shoes.


Conversely, Batrachochytrium salamandrivorans, the salamander-killing fungus, appears to have been imported to Europe. The effects of the disease were first noted in the Netherlands, where, in 2010, populations of fire salamanders started to crash. Bsal has since been detected in Belgium and Germany. Genetic analysis suggests the fungus came from East Asia, and it’s suspected it was imported to Europe through the pet trade. Bsal does not yet seem to have arrived in North America, which is
home to almost half of the world’s known salamander species. But lab tests have demonstrated that many New World species, including the common red-spotted newt, would be sickened by it.

To prevent a fungal disease, the U.S. last week banned the importation of 201 salamander species.

Just last week, the U.S. Fish and Wildlife Service announced that it would bar the importation and movement of 201 species of salamander. The ban came at the urging of researchers, who have warned that Bsal could spread to the U.S. In an op-ed last year in the The New York Times that ran under the headline “Stopping the Next Amphibian Apocalypse,” Karen Lips, a biologist at the University of Maryland, and Joe Mendelson, director of herpetological research at Zoo Atlanta, noted that the Fish and Wildlife Service had the power, under the Lacey Act, to block such imports.


David Hoskins, assistant director of the agency’s Fish and Aquatic Conservation Program, told The New York Times that “with the highest biodiversity of salamanders in the world here in the United States, we’re very concerned about the risk this fungus poses.”


Bd, which has devastated frog populations, also seems to have been spread through global trade, though in this case, no one is sure where it originated. Recent research has shown that there are several different strains of Bd, most of which seem to be quite old and relatively benign. The strain that’s responsible for the tremendous losses that have been seen is known as Bd-GPL, for Global Pandemic Lineage, and genetic analysis suggests that it must have been introduced to places like Central America from somewhere else. But that somewhere has proved difficult to identify. It’s also possible that Bd-GPL is a kind of hybrid strain that resulted when two strains were brought into contact. When fungi arrive in a new place, Fisher observed, “they have this opportunity not only to capitalize on new niches, they have an opportunity to undergo recombination and generate a very distinct genotype.” 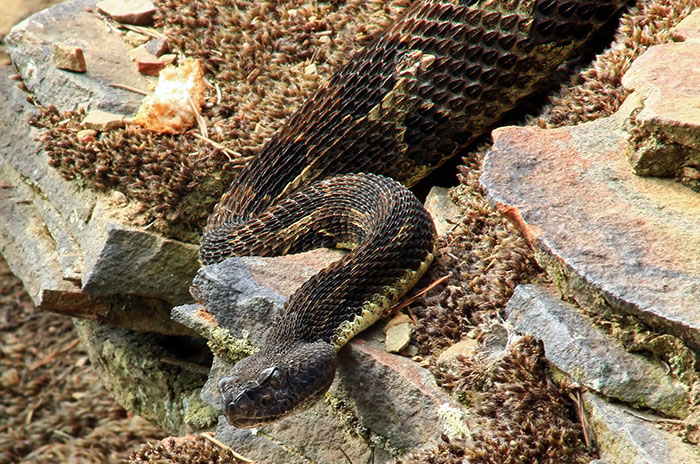 Timber rattlesnakes are among the more than dozen U.S. species in nine states that have been affected by snake fungal disease (SFD). NICHOLAS A. TONELLI/FLICKR

The distribution of Snake Fungal Disease, by contrast, suggests it is not a recent arrival.
“I think originally people assumed it was introduced,” Lorch, of the National Wildlife Health Center, said. “But the pattern that we’re seeing on the landscape isn’t indicative of something that was introduced. It didn’t show up in New England and slowly spread from there until it hit Illinois.” Instead, it showed up more or less simultaneously in disparate locations. This pattern, according to Lorch, “points more to it being a native pathogen, with other factors that are stressing the wildlife.”


And this, in turn, points to another possible answer to the question “why now.” Fungal diseases tend to be opportunistic; in humans, usually they affect those with compromised immune systems. Climate change, habitat loss, heavy metal pollution, competition from invasives — these are just a few of the forces that may be lowering animals’ resistance.


“I think it’s very likely that habitat in general is degraded, and so you have greater problems with disease,” Tim James, a professor of ecology and evolutionary biology at the University of Michigan and associate curator of fungi at the university’s herbarium, said. “Everything is more stressed.”


Fisher, of Imperial College, noted that movement and stress can occur together. When people carry animals around the world, often the animals suffer. If they’re carrying any sort of pathogen, that pathogen is likely to thrive. This means imported species are apt to be carrying particularly heavy pathogen loads.


“You’ve got this enormous pet trade, and those animals are unhealthy,” Fisher said. “So you have this movement mechanism, but you also have more susceptible, amplifying hosts.”
Whether the explanation is more movement or more stress, or — most likely — both, the pattern, unfortunately, seems likely to continue.


“As an individual body becomes weakened or sick from any sort of process it’s more likely to get an infectious disease,” Allender, of the University of Illinois at Urbana-Champaign, observed. “So the same thing is going to be happening in ecosystems. Fungi are really efficient and are the ones that are popping up. But I think until we start to invest a lot of energy into looking at our ecosystems and valuing the components of ecosystems, the chances of emerging infectious diseases are going to keep going up.”