For many years, Diana Six, an entomologist at the University of Montana, planned her field season for the same two to three weeks in July. That’s when her quarry — tiny, black, mountain pine beetles — hatched from the tree they had just killed and swarmed to a new one to start their life cycle again.

Now, says Six, the field rules have changed. Instead of just two weeks, the beetles fly continually from May until October, attacking trees, burrowing in, and laying their eggs for half the year. And that’s not all. The beetles rarely attacked immature trees; now they do so all the time. What’s more, colder temperatures once kept the beetles away from high altitudes, yet now they swarm and kill trees on mountaintops. And in some high places where the beetles had a two-year life cycle because of cold temperatures, it’s decreased to one year.

Such shifts make it an exciting — and unsettling — time to be an entomologist. The growing swath of dead lodgepole and ponderosa pine forest is a grim omen, leaving Six — and many other scientists and residents in the West — concerned that as the climate continues to warm, these destructive changes will intensify.

“A couple of degrees warmer could create multiple generations a year,” she said, as she chopped off a piece of bark on a dead lodgepole pine to show the galleries of burrowing larvae. “If that happens, I expect it would be a disaster for all of our pine populations.”

Across western North America, from Mexico to Alaska, forest die-off is occurring on an extraordinary scale, unprecedented in at least the last century-and-a-half — and perhaps much longer. All told, the Rocky Mountains in Canada and the United States have seen nearly 70,000 square miles of forest — an area the size of Washington state — die since 2000. For the most part, this massive die-off is being caused by outbreaks of tree-killing insects, from the ips beetle in the Southwest that has killed pinyon pine, to the spruce beetle, fir beetle, and the major pest — the mountain pine beetle — that has hammered forests in the north.

These large-scale forest deaths from beetle infestations are likely a symptom of a bigger problem, according to scientists: warming temperatures and increased stress, due to a changing climate. Although western North America has been hardest hit by insect infestations, sizeable areas of forest in Australia, Russia, France, and other countries have experienced die-offs, most of which appears to have been caused by drought, high temperatures, or both.

Dead forests now carpet the mountains and have transformed life in many parts of the Rockies.

One recent study collected reports of large-scale forest mortality from around the world. Often, forest death is patchy, and research is difficult because of the large areas involved. But the paper, recently published in Forest Ecology and Management, reported that in a 20,000-square-mile savanna in Australia, nearly a third of the trees were dead. In Russia, there was significant die-off within 9,400 square miles of forest. Much of Siberia has warmed by several degrees Fahrenheit in the past half-century, and hot, dry conditions have led to extreme wildfire seasons in eight of the last 10 years. Russian researchers also are concerned that warmer, dryer conditions will lead to increased outbreaks of the Siberian moth, which can destroy large swaths of Russia’s boreal forest.

While people in some places have the luxury to doubt whether climate change is real, it’s harder to be a doubter in the Rocky Mountains. Glaciers in Glacier National Park and elsewhere are shrinking, winters are warmer and shorter, and the intensity of forest fires is increasing. But the most obvious sign is the red and dead forests that carpet the hills and mountains. They have transformed life in many parts of the Rockies.

It has hit home for me on a personal level. Virtually every one of the hundreds of old-growth ponderosa pines on the 15 acres of land where I live near Helena, Montana is dead, and we are surrounded by a valley of dead and dying forest. Most trees have been logged and taken to a pulp mill, where they were turned into cardboard for boxes. 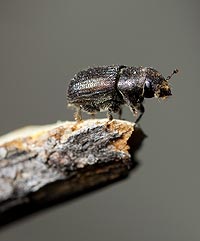 Photo by iStock
The tiny mountain pine beetle, which is just a quarter of an inch long, has destroyed nearly 70,000 square miles of forest in the Rocky Mountains.

University of Montana ecologist Steve Running says warmer temperatures in the Rockies bring spring earlier and fall later, each by about a week, yet precipitation has remained about the same. That translates into a drought, and stressed trees are highly susceptible to beetle infestations. Wintertime minimum temperatures in the 1950s, meanwhile, ranged from 40 F to 50 F below zero. That’s risen to the 30-below range, and there are fewer days when minimums are reached. It’s not getting cold enough anymore to kill the beetles, which over-winter in their larval stage and survive the milder temperatures because they are filled with glycol, a natural anti-freeze.

In addition, the past suppression of fire and the fact that many Western trees are reaching the age at which beetles target them — 80 to 100 years — are also factors in the widespread loss of forests.

So the forests across the West are dying, in such large numbers that U.S. Secretary of the Interior Ken Salazar called it the West’s Hurricane Katrina. In Colorado and southern Wyoming, the U.S. Forest Service has created an emergency management team to cut down dead trees around towns and along roads and power lines. Forest Service campgrounds and trails have been closed because of the hazard from dead trees, and communities surrounded by dead forests have drawn up emergency evacuation plans for residents.

Large-scale die-offs have occurred in the past. Mountain pine beetles are native to the West and are part of the ecosystem. Lodgepole forests regenerate through large-scale “stand replacing events,” which include fire and insects. The die-offs now, though, are on a scale unprecedented since the West was settled and are so big that they are having unusual impacts on ecosystems. Diana Six contends that the whitebark pine, once largely protected from the beetles because it grew at high altitudes and was shielded by cold, is nearing functional extinction in large portions of its range and may no longer be able to feed grizzly bears and other species that love its high-fat nut. In Mexico, bark beetles are beginning to kill oyamel fir trees in a rare 139,000-acre biosphere preserve where the majority of North America’s monarch butterflies travel each fall to spend the winter. So far, about 100 acres in a core area of 33,000 acres have been killed by bark beetles.

Tree-killing bugs aren’t the only problem. In 2005 Colorado researchers noticed that aspens were suddenly dying in large numbers. That year they found 30,000 acres of dead aspen forest. The next year there were 150,000 acres, and in 2008 it had soared to 553,000. The die-off is called Sudden Aspen Death, or SAD. “It’s growing at an exponential rate,” said Wayne Shepperd, who researches aspen for the Forest Service. “It’s pretty sobering when you see a whole mountainside or whole drainage of aspen forest dead.”

Groves at low elevations and facing south are dying fastest, and scientists believe the cause is hotter temperatures and drier weather. It’s not only killing mature trees, but the root mass as well. An aspen grove is the offspring of a large single underground clonal mass, which sends up shoots. “The whole organism is disappearing and it has profound implications,” Shepperd said. “When the roots die, groves that are hundreds or thousands of years old aren’t going to be there anymore.”

If the die-offs continue, the loss of the aspen trees would be a blow to goshawks, songbirds, and a number of other species that find food and refuge in the groves.

There isn’t enough data to draw a conclusion about the reasons for forest die-offs globally.

Perhaps more than anyone, Craig Allen is familiar with these large-scale forest die-offs. A forest ecologist with the U.S. Geological Survey’s Jemez Mountain Field Station in New Mexico, not only are his office and home surrounded by a pinyon die-off, he also is the lead author of the paper — with 19 other authors —published in Forest Ecology and Management, which sought to document and begin to understand what is happening to forests in North America and around the world as the result of climate change.

Coming up with a definitive understanding at this point is impossible, Allen says. Forests are complex, and unfortunately, woefully understudied, and there isn’t nearly enough data to draw a conclusion about the reasons behind forest die-offs globally. “There’s huge information gaps and uncertainties,” says Allen.

What contributors were able to do in the paper is collect anecdotal reports of broad-scale forest mortality from around the world. “The point of this paper is to connect the dots, at least the ones we can connect,” says Allen. “We can’t even tell you for sure if there’s more forest mortality. There’s not consistent monitoring.”

In 2005 a strong El Nino caused a dramatic drought in the Amazon. It killed forest across the region and is extremely well documented because so many researchers had existing plots there. “The heart of the biggest rainforest in the world turned from a carbon sink to a carbon source,” said Allen. “If you have long-term drought you can bleed a lot carbon into the atmosphere.”

A lot of beetles can also turn vast tracks of forest from carbon sinks to carbon sources. Take British Columbia, which is ground zero for the mountain pine beetle infestation in North America. Some 53,000 square miles of mature pine forest is dead and the province is projected to lose 80 percent of its mature lodgepole pine trees by 2013. The second largest known die-off there occurred in the 1980s and claimed just 2,300 square miles. Bill Wilson — the province’s director of Industry, Trade and Economics Research — said he has flown in a plane for hours over the province and seen nothing but dead forest the entire time.

In 2008, so much of British Columbia’s forests had died they also went from being a net carbon sink to carbon source.

Diana Six works in Africa where she has seen other die-offs first-hand. “In Africa where I work, suddenly whole hillsides are dropping dead,” she said. “It’s happening so fast people are in shock. It’s a tragedy.” Species include the quiver tree, camel-thorn, and the giant euphorbia, a 30-foot-tall succulent. The causes are not known, but the suspects are hotter and drier weather, or shifting rainfall patterns.

All told, the paper that Allen co-authored describes 88 well-documented forest die-offs around the world, going back as far as the 1960s and 1970s, although most are in the 1990s and 2000s.

If there was a way to predict die-offs, Allen said, land managers could take preemptive action, such as mechanical thinning or prescribed burning to increase the vigor of forests.

What gives researchers pause is that many of these large die-offs have occurred with minimal warming, in just a few years. In the West, for example, the average temperature has warmed on average 1.8 F over the past century. “This is before we put two to four degrees centigrade (3.6 F to 7.2 F) into the system,” said Allen, referring to forecasts for warming by the end of this century. Trees across the world are stressed already from fragmentation, air pollution, and other problems, he said. “I don’t know how much stress the forests of the world can take,” said Allen.

Correction, March 18, 2010: An earlier version of this article misstated the projected damage to British Columbia’s forests from infestations of mountain pine beetles. The insect outbreak is projected to kill 80 percent of the province’s mature lodgepole pine trees by 2013.