The world has a template for conservation: protected areas. The United States invented the template with its great national parks, protecting pristine wilderness. But what if the template is wrong? What if it is doomed to fail in a crowded world where most species live most of their time outside protected areas?

This year is the International Year of Biodiversity. It will be a year in which calls for more parks will grow in order to halt the unprecedented loss of species across the world. The calls will come especially from mainstream environmental groups like WWF, the Nature Conservancy, and Conservation International, for whom protecting “hotspots” of biodiversity on land — which they either own or manage — is a core activity.

The great African parks of today are, ecologically, as artificial as an English country garden.

There are more parks every year. And yet despite this, conservation is failing. Neither the Biodiversity Convention, signed at the Earth Summit in Rio de Janeiro in 1992, nor the promise made a decade later at the World Summit on Sustainable Development in Johannesburg to staunch the loss of species, has done more than prevent the losses from accelerating. Perhaps the whole idea of sealing off wilderness from human activity is fatally flawed — a misreading of our symbiotic relationships with nature.

The trouble is that what works in the wide open spaces of the U.S. — in Yellowstone and Yosemite national parks — may not work elsewhere, where there are more people and the demands on land are far greater. The test bed is likely to be Africa, where more of the world’s large mammals survive than anywhere else.

It was in Africa that the U.S. parks model for conservation was first tried out on a global stage. It began with the godfather of America’s national parks, President Theodore Roosevelt, and a safari hunt, probably the greatest and most famous safari ever.

A hundred years ago this year, the recently retired U.S. president spent a year with his son Kermit in the African bush, eventually sending home more than 10,000 carcasses, most of them to the Smithsonian Institution. To this day, one of his white rhinos, suitably stuffed, retains a revered place in the mammal room at the Institution’s National Museum of Natural History in Washington, D.C. 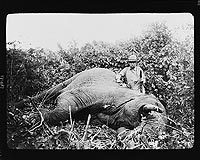 Yet this was mythmaking on a grand scale, for much of the “primeval” Africa that Roosevelt saw was less than two decades old. And the great parks of today are, ecologically, as artificial as an English country garden. This misreading of the landscape, and miscasting of conservation, goes to the heart of many of the problems conservationists face today.

So what happened in Africa a hundred years ago. Why this misreading?

The story began when an Italian expeditionary force arriving in the Horn of Africa in 1887. The small band brought with them livestock from Asia that carried a vicious hitchhiker — a cattle virus that causes a disease called rinderpest. Native to the steppes of central Asia, this close relative of measles and canine distemper had periodically swept through Europe, but was unknown in Africa south of the Sahara.

The virus quickly spread to native cattle and traveled from Eritrea, through Ethiopia, and down trails south along the Rift Valley and west across the Sahel. The British colonial authorities in southern Africa tried to halt the passage of the disease by erecting a 1,000-mile barbed-wire fence and shooting infected cattle. But it was futile.

Rinderpest created an ecological revolution against people and in favor of wildlife.

The pandemic was arguably the greatest natural calamity ever to befall Africa. “Never before in the memory of man, or by the voice of tradition, have the cattle died in such vast numbers; never before has the wild game suffered… The enormous extent of the devastation can hardly be exaggerated,” wrote Frederick Lugard, a British army captain who traveled the caravan routes of northern Kenya in 1890.

Rinderpest only targets cloven-hoofed animals, but indirectly it devastated the human population, too. Herders had no livestock. Farmers had no oxen to pull their plows or drive the waterwheels that irrigated the fields. Hungry populations fell prey to diseases such as smallpox, cholera, and typhoid.

Modern researchers have not estimated how many people died, but Lugard wrote: “Everywhere the people I saw were gaunt and half-starved, and covered with skin diseases. They had no crops of any sort to replace the milk and meat which formed their natural diet.” In places, epidemics coincided with drought. Between 1888 and 1892, roughly a third of the population of Ethiopia, several million people, is thought to have perished.

Great pastoral civilizations across the continent were shattered. Central African cattle-rearing tribes like the Tutsi and Karamajong starved, along with Sudanese nations like the Dinka and Bari, West Africans like the Fulani, and southern Africans like the Nama and Herero. The folklore of the Maasai of East Africa tells of the enkidaaroto, the “destruction,” of 1891. They lost most of their cattle, and two-thirds of the Maasai died. One elder later recalled that the corpses were “so many and so close together that the vultures had forgotten how to fly.” 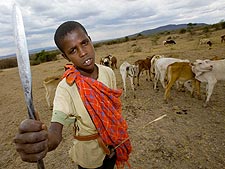 Getty Images
A young boy herds cattle near his home on the border of the Masai Mara National Game Reserve in Siana Springs, Kenya.

Many of these societies never recovered their numbers, let alone their wealth and power. Rinderpest served up the continent on a plate for European colonialists. In its wake, the Germans and British secured control of Tanzania and Kenya with barely a fight. In southern Africa, the hungry and destitute Zulus migrated to the gold mines of Witwatersrand, helping to create the brutal social divide between black and white from which apartheid sprang.

It is an extraordinary story, rarely told. But the ramifications did not stop with the “scramble for Africa.” Paradoxically, this cataclysm for wildlife created the “primeval landscape” discovered by Roosevelt and his hunting chums.

How come? First the epidemic killed huge amounts of native wildlife. But it created an ideal landscape for the spread of the tsetse fly, which even today is second only to AIDS as an obstacle to Africa’s development.

The tsetse fly lives in lowland tropical bush. It carries trypanosomiasis, a disease that is often endemic among wild animals such as ruminants — likely conveying some immunity — but can cause widespread epidemics among cattle and humans, in whom it is called sleeping sickness. Tsetse flies like lush vegetation, where adults can deposit their larvae. Before rinderpest arrived, the cattle herds kept by pastoralists on the African plains had always checked the spread of tsetse by grazing the bush. But with rinderpest decimating the cattle, the woody vegetation grew fast. So after the epidemic passed, when wild animal populations revived much faster than the cattle, the tsetse flies spread fast through bush they had once been unable to occupy.

The flies and the sleeping sickness they carried in turn kept humans and their cattle from returning to graze down the bush. In East Africa, highland areas where cattle had until recently roamed free quickly became tsetse-infested bush and woodland. In southern Africa, the fly spread through the Zambezi and Limpopo valleys, creating no-go areas for cattle where once they had thrived.

In this way, rinderpest created an ecological revolution against people and cattle and in favor of wildlife. Africa has never fully recovered. Probably half a million people contract sleeping sickness each year, of whom some 100,000 die. The tsetse fly remains a major obstacle to the economic development of whole regions, often thriving in the most fertile lowlands that would otherwise make ideal cattle country.

Conservationists are seeking to preserve a version of the wild that has not existed for thousands of years.

For conservationists, this makes sleeping sickness “the best game warden in Africa.” But it has also warped our perceptions of Africa. European colonists “just assumed that the country they found packed with animals and empty of people was the way that Africa had always been,” says John Reader, author of Africa: A biography of the Continent. Julian Huxley, head of UNESCO and a founder of the World Wildlife Fund in the early 1960s, described the East African plains as “a surviving sector of the rich natural world as it was before the rise of modern man.”

In their ignorance, conservationists created Africa’s great national parks in regions where rinderpest had recently destroyed human society: the Serengeti and Masai Mara, Tsavo and Selous, Kafue, Okavango, Kruger, and the rest. And they decreed that humans and their cattle had henceforth to be excluded at all costs. One of the most famous of these conservationists, the German biologist Bernhard Grzimek who in 1960 wrote the book Serengeti Shall Not Die and directed the film of the same name, worked indefatigably to keep the Masai out of the Serengeti. “A National Park must remain a piece of primordial wilderness to be effective,” he wrote. “No men, not even native ones, should live inside its borders. The Serengeti cannot support wild animals and domestic cattle at the same time.”

This is the image of conservation that we perpetuate to this day. But it is built on a myth. It is only recently that researchers have realized that, before rinderpest, cattle and wild game coexisted on the plains of Africa.

“Pastoralists had herded their cattle in harmony with wildlife for thousands of years,” says Robin Reid, who until last year was an ecologist at the International Livestock Research Institute in Nairobi. By excluding cattle from large areas, colonial ecologists and their successors destroyed that dynamic of coexistence and replaced it with a conservation ideology based on separation — nature on one side of the fence, mankind on the other. But by following this goal, we are trying to put back together something that has not existed for thousands of years.

And not just on the plains of Africa. Rainforest researchers from the Amazon and Central America to the jungles of Africa and Borneo have recently been discovering that there are probably no truly pristine rainforests anywhere in the world. Prior to 1492, the Amazon was infested with humans. Most of central Africa’s forests have been consumed at least once for iron smelting. In setting pristine nature as the ideal, conservationists are seeking to preserve a version of the wild that has probably not existed in most of the world for thousands of years.
Is co-existence possible between man and wildlife? In a few parts of Africa, where rural communities are able to benefit from the profits from wildlife tourism and even trophy hunting, a new accommodation has been found. Perhaps other models can be found in the 21st century.

Maybe, a century after Roosevelt toted his guns across the African bush, parks need replacing with a new approach to wildlife conservation: one based not on separation but on coexistence between wildlife and humans.