It was almost like watching wooly mammoths parting tusk-high savannah. In the gusty air above the Grand Canyon relicts from the Ice Age wheeled and dipped. Through my binoculars I could make out numbers on the wing tags of these California condors, North America’s largest and arguably most endangered bird.

By 1982 only 22 remained on the planet. Then in a decision that outraged a large element of the environmental community, the U.S. Fish and Wildlife Service announced that all condors would be evacuated from the wild and bred in captivity. Friends of the Earth founder David Brower pled for “death with dignity.” But in 1993 the Peregrine Fund, a conservation organization, took on captive breeding, and the program proved a stunning success. After only three years, condor releases started in northern Arizona. 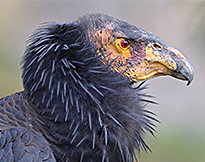 Today 234 California condors are living in the wild, 194 of them captive bred. GEORGE LAMSON/SHUTTERSTOCK

Today 234 birds are living in the wild (194 of them captive bred), but the prognosis for the species is scarcely brighter than in 1982; they’re being poisoned. When lead bullets strike bone they tend to splinter, impregnating meat and entrails with toxic fragments, any one of which can kill a condor. All manner of carrion-eating birds and mammals feast on the poisoned gut piles left when hunters field dress game.

On April 16, 2013 a bill to ban lead hunting ammo in California passed its first hurdle when the Parks and Wildlife Committee of the state assembly approved it by a 9 to 5 vote. Without such a ban, extinction of the California condor is inevitable, according to a 2012 study by the National Academy of Sciences.

When vertebrates ingest lead, their bodies mistake it for calcium and beneficial metals, incorporating it into vital tissues. Symptoms include anemia, convulsions, paralysis, and deterioration of brain, eyes, kidneys, and liver. Humans generally survive lead poisoning, albeit with diminished motor and cognitive capacity. (Research indicates that after lead was removed from U.S. gasoline in the 1970s, children’s IQs rose an average of six points.) But to make it in the unforgiving world of nature, wildlife has to be fine-tuned. So lead-poisoning in wild mammals and birds is rarely survivable.

Today wild condors are on life support because of lead in their blood. They must be routinely captured and detoxed with calcium-based drugs. But the drugs strip away nutrients as well as lead, weakening the birds so they can’t be released for a month or more. A study by the University of California, Santa Cruz found that 48 percent of condors tested and treated between 1997 to 2010 had potentially lethal blood-lead levels.

Today, wild condors are on life support because of lead in their blood.

In 2008, California banned lead hunting ammo in all or parts of 13 central and southern counties and seven deer-hunting zones — the presumed core condor range. But the law hasn’t worked; the birds have different ideas about what their range should be.

The statewide ban now before the legislature might not work either because condors also scavenge in Arizona and Utah. Of 166 captive-bred birds reintroduced in these two states since 1996, 38 are known to have died from lead poisoning. But the California bill would give the species a fighting chance, and it might set a precedent.

At least 130 species of birds, mammals, and reptiles ingest lead from bullets, so a national ban is desperately needed. On March 22, 2013, 30 leading scientists, doctors, and public-health authorities assembled by the University of California, Santa Cruz signed a statement warning that lead ammo should be phased out for hunting because it poses an unacceptable danger to humans and wildlife.

The danger isn’t just unacceptable; it’s unnecessary. Copper bullets, which rarely shatter and are far less toxic, work as well or better and are only marginally more expensive. Throughout the West, hawks and eagles are dying because they’re eating big-game entrails and carcasses of prairie dogs shot by so-called “varmint hunters” and left where they drop. For five years until its grant expired, Audubon of Kansas offered varmint hunters copper bullets at the same cost as lead, but there were no takers. Varmint hunters prefer lead for no other reason than that’s what they’ve always used.

Other hunters are less addicted. Anthony Prieto of Santa Barbara, who shoots only copper and does volunteer work for the condor recovery team, founded “Project Gut Pile,” a group that advocates non-toxic ammo and encourages hunters to bury entrails from their kills. “Now that we have the copper alternative burying guts isn’t enough,” he told me. “Scavengers dig them up. We need to ban lead.” Three years ago, Project Gut Pile petitioned the U.S. Environmental Protection Agency for such a ban, but the gun lobby shouted it down.

The U.S. has eliminated lead from paint, pipes, and gasoline and is in the process of eliminating it from tire weights. But Americans still confuse bullets with gun rights. The Russians, on the other hand, are starting to comprehend the dangers of lead bullets. They’ve at least banned them for military use, effective in 2014.

The National Rifle Association defines any restriction on lead ammunition as a plot to disarm America.

One might suppose that organizations proclaiming to defend hunters such as the National Rifle Association (NRA) would encourage them to at least cut back on poisoning themselves with lead-laced meat. But the NRA defines any suggested restriction on lead ammo as a plot to disarm America.

The NRA and the Safari Club International (SCI), another powerful segment of the gun lobby, pooh-pooh the notion that ingesting lead fragments impairs humans and proclaim instead that members “will be impaired if they are no longer able” to shoot lead bullets. Pilloried for its promotion of “canned hunts” for captive, semi-tame animals, the SCI seeks to bootstrap its image by distributing member-killed deer to economically disadvantaged families across America. These families typically have the highest exposure to other sources of lead. In 2007, acting on data collected by University of North Dakota medical professor William Cornatzer, health departments of North Dakota and Minnesota impounded 17,000 pounds of donated, lead-impregnated venison.

Basically, Cornatzer is against poisoning the poor. Although he’s an SCI member and hunts all over the world, the NRA attacked the doctor’s integrity on grounds that he serves on the board of the Peregrine Fund, which had advocated nontoxic bullets in condor range. With that, the NRA untruthfully claimed that follow-up studies by the Centers for Disease Control and the North Dakota Department of Health “indicate nothing that should restrict or eliminate the use of lead ammunition for hunting.”

What the follow-up studies indicate is that blood-lead levels in humans increase with wild-game consumption. Still, the NRA has prevailed. North Dakota and Minnesota are again allowing distribution of lead-killed venison to the poor, merely warning that it should be avoided by pregnant women and young children.

Condors and other carrion eaters feed heavily in U.S. national park units. On March 5, 2009 a close friend in the National Park Service sent me this eloquent, one-character email: “!” Attached was a memo from the service’s acting director, ordering a ban on lead ammo in park units where hunting was authorized. The gun lobby unloaded on the agency, and the ban was promptly modified. Hunters could keep firing lead, but park personnel and contractors had to use non-toxic bullets when training, controlling feral goats and hogs, or culling deer and elk. 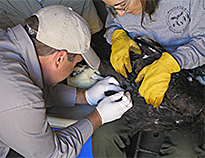 “We know why condors are going extinct, and we know why thousands of hawks and eagles are dying,” says a federal biologist who requested anonymity and asked that I not even email him because, under the Freedom of Information Act, the gun lobby gets to route through government disk drives the better to intimidate researchers who reveal information not to its liking. “What I have an even harder time with is that we take meat purposefully laced with lead fragments and give it to the poorest and most disenfranchised members of our society.”¦ The people making decisions about ammunition are the same people hanging award placards on their walls for ‘helping’ the poor by feeding them poison.”

The gun lobby is nothing if not consistent. A quarter century ago, in response to a national push to replace lead waterfowl shot with equally effective and affordable non-toxic steel, the NRA issued this warning: “Anti-gunners, attacking lead shot under the guise of environmentalism, have succeeded in gaining a beachhead in our continuing war… Our enemies, after failing to restrict our right to bear arms, attacked our flanks.”

One might suppose that an outfit claiming to speak for hunters would have a problem with elimination of game birds. But the NRA was just fine with something like 1.4 million ducks annually ingesting fatal doses of lead shotgun pellets with which waterfowl hunters were festooning the nation’s marshes.

The dangers posed to people and wildlife by lead hunting projectiles is hardly breaking news.

Then, as now, NRA “enemies” consisted of hunting organizations, state and federal wildlife managers, ornithologists, and, of course, environmentalists. Ducks, geese, and swans kept dying through 1991, when a national ban on lead waterfowl shot was finally imposed. And they’re dying today (albeit in lesser numbers) from residual lead shot and new lead shot from legal upland bird hunting.

The dangers posed to people and wildlife by lead hunting projectiles is hardly breaking news. One early alarm was sounded by George Bird Grinnell in his sporting weekly Forest & Stream: “Until they reach the gizzard where the wildfowl grinds his food, these pellets do no harm, but, when reduced to powder… they become a violent poison.” The year was 1894. Such is the efficacy of the gun lobby in controverting the public good.

And what of the emergency action to keep California condors on the planet, which just made it through its first legislative hurdle? According to the NRA, inconveniencing hunters by forcing them to switch to copper bullets is another assassination attempt on sport and the Constitution. “Anti-Gun Legislators Vote to Destroy Hunting and the Second Amendment in California,” screams its action alert.