Honolulu’s roofscape is being repainted in blue-black. From the flattop warehouses of Sand Island to the city’s residential neighborhoods, shiny rectangles spreading across roofing tiles are collecting the tropical sun and powering houses. It would seem like a no-brainer for sunny Hawaii, but it’s just since 2007 that a combination of government and utility incentives and the right economics have ushered in a real solar boom, with capacity roughly doubling each year.

Today, Hawaii leads the nation in rooftop solar per capita: About 10 percent of residential customers, more than 50,000 households, have panels on their roofs, according to the Solar Electric Power Association. That compares with about 0.5 percent nationally. 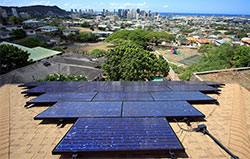 But in 2013, the boom nearly went bust. Because rooftop solar penetration has moved so rapidly, Hawaii’s utilities are now grappling with both technical and economic challenges that mainland utilities have yet to fully face. How Hawaii surmounts these hurdles could help other utilities sidestep barriers as they ramp up capacity.

“We can’t look to any other state for solutions because we’re encountering issues before most other places,” said Darren Pai, senior communications consultant for Hawaii Electric Companies (HECO) — a jointly owned set of utilities serving Oahu, Maui, Lanai, Molokai, and the big island of Hawaii.

Economics propelled Hawaii to the front of the solar race. Retail electricity rates are the highest in the nation — around 34 cents per kilowatt-hour versus 12 cents on average nationally — because this remote island chain has long relied on imported petroleum to generate its electricity. These high power bills, coupled with declining prices for photovoltaic panels, made solar power affordable in Hawaii well before other places in the United States.

State and federal policies also have encouraged the development of solar power in Hawaii. One program for homeowners, called net metering, has allowed them to sell surplus electricity generated by rooftop solar panels back to HECO at the utility’s own high retail rates. That financial incentive is part of why rooftop solar is much bigger here than centralized solar power farms. Rooftop panels produced almost 3 percent of the state’s electricity in 2013, nearly ten times as much as solar farms. The one exception is the small island of Kauai, where the local utility has built its own solar power installations.

‘Essentially, the utility is now competing with its own customers,’ says one consultant.

Hawaii’s solar boom ran into trouble in late 2013 when HECO began dragging its feet on approving new rooftop solar systems for connections to the grid, citing both technical and economic limitations. A major technical hurdle, HECO said, is the intermittency of solar power at night and during cloudy weather. Maintaining power quality and reliability is already difficult on isolated grids such as those on each of Hawaii’s islands, and high levels of intermittent solar power add to the challenge.

The economic obstacles also have been formidable. After a century of receiving power from utilities, customers are now generating their own power and helping the grid to balance supply and demand via smart appliances that can curtail electricity demand when required. To manage this more complex relationship, utilities must invest in new infrastructure. Buying surplus power at retail rates via credits to homeowners with solar panels also creates a revenue drain. “Essentially, the utility is now competing with its own customers,” said Bentham Paulos, a clean energy consultant.

Such problems are hardly unique to Hawaii. Germany, the leading solar power producer in Europe, has spurred its well-known Energiewende, or energy transition program, using generous subsidies to homeowners. But economic pressures have forced the German government to sharply cut so-called “feed-in tariffs” that paid homeowners high rates to sell their home-generated solar power back to the grid. As a result, home solar power installations have slowed.

In the U.S., Hawaii’s renewable energy development is well ahead of other states’. Hawaii has set a target of producing 40 percent of its electricity from renewable sources by 2030 and decreasing demand through efficiency measures by 30 percent. By the end of 2013 the state was ahead of schedule, with renewable energy producing 18 percent of the state’s electricity through a combination of solar power, wind, biomass, and geothermal. Solar currently makes up about one-sixth of Hawaii’s renewable portfolio, but it is growing rapidly.

Solar is booming on Kauai, which aims to generate 50 percent of its power from renewable sources by 2023.

In Hawaii and worldwide, rooftop solar poses a challenge for utilities because they don’t control it. Such “distributed generation” — electricity generated on existing buildings, rather than at a central power plant — has environmental benefits over utility-scale solar farms because it doesn’t take over agricultural land or wildlife habitat. The question is how to make it work for the utility.

One of HECO’s proposed solutions is ending net metering — the practice of allowing home or business owners to sell power back to the grid at preferred rates — for all new customers; existing net-metered customers and those with pending applications would retain their benefit. In a filing with the state Public Utilities Commission last month, HECO argued that solar system owners can end up paying nothing to the utility, yet still rely on its grid daily, drawing electricity at night and when clouds pass. That means grid operation and maintenance costs are, “increasingly being shifted from those who have solar to those who don’t,” wrote HECO in the filing. HECO would buy surplus power from new rooftop solar systems at a rate comparable to what it pays for oil-fired power.

However, solar can keep growing without net metering, thanks to the recent plunge in the costs of photovoltaic panels and continuing state and federal tax credits, said Marco Mangelsdorf, president of Hilo-based ProVision Solar, a solar installation company.

Yet Isaac Moriwake, a Honolulu-based attorney for Earthjustice, said he’s already seeing opposition from the public over discontinuing net metering. “This move removes any doubt that HECO’s motivation for slowing down solar for over a year was to protect their bottom line,” he said.

Mangelsdorf disagrees with the solar industry trade groups that oppose the end of net metering and have filed a complaint with the Public Utilities Commission. He said net metering has served its purpose in accelerating rooftop solar and it’s time to end what, in effect, amounts to a subsidy to customers that generate solar power. 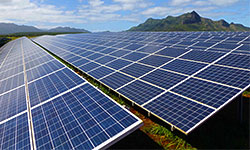 The Anahola solar power farm on the island of Kauai in Hawaii. ERICA GIES

Despite that change, solar is booming on Kauai, too, where the cooperative has set the ambitious goal of generating 50 percent of the island’s power from renewable sources by 2023. But rather than providing incentives for rooftop solar, Kauai’s utility has been building solar power farms. However, Mangelsdorf said the island’s small power demand — Kauai has a population of 67,000 and about one-fifteenth the electricity demand of Oahu — makes it an unfair comparison. Just a few solar farms go a long way on Kauai, he said.

In January I visited a new 12-megawatt solar farm there, under construction in Anahola on land held in trust for native Hawaiians. Sandwiched between a mountain and the ocean, the rows of panels sheltered endangered nene geese. How big is a 12-megawatt installation? I could have walked around the entire farm in 15 minutes — tiny compared to the truly industrial farms being built in the California desert, the largest of which generate up to 550 megawatts.

Anahola is even small compared to Oahu’s rooftop generation, which adds up to more than 200 megawatts. But on Kauai, where grid demand peaks in the early evening at just 70 megawatts, Anahola’s solar output will have a big impact. It and two other solar farms built since 2012 together generate 30 megawatts in the mid-afternoon.

On Hawaii’s other islands, HECO is getting outside help to make distributed solar work. The U.S. Department of Energy’s National Renewable Energy Lab is using Hawaii as a testing ground to learn more about the benefits and limits of rooftop photovoltaic power. SolarCity, a major solar system provider, is also partnering in the research.

This consortium has already come up with a solution to one key hurdle. When high levels of solar generation in a given neighborhood produce more power than the area is consuming, it can cause voltage on local lines to rise beyond the levels that can be accommodated by electrical equipment, possibly damaging customers’ appliances or causing service disruptions. That worry was a big part of the permitting slowdown, said HECO.

But smarter inverters can help, researchers found. Inverters are required in any solar system to convert the direct current generated by solar panels to the alternating current used on the grid. Inverter manufacturers are upgrading their equipment to simultaneously adjust the voltage levels on the local lines as needed. The inverters can also be integrated with battery systems to store excess power. In its Public Utility Commission filing to end net metering for new customers, HECO promised that smart inverters could double capacity for rooftop solar on neighborhood lines.

Where Hawaii’s solar experiment goes from here will depend largely on the future of HECO, which in December struck a $4.3 billion deal to be acquired by Florida-based NextEra Energy. Observers are unsure whether HECO’s move was inspired by the challenges posed by Hawaii’s renewables scale-up. Nor is it clear how the buyout would affect Hawaii’s renewable energy expansion.

Subsidiary NextEra Energy Resources is one of the largest renewable energy developers in the United States. But its regulated utility subsidiary in Florida, Florida Power and Light, has been widely criticized for blocking policies designed to boost rooftop solar and energy efficiency.

ALSO FROM YALE e360With Rooftop Solar on Rise, U.S. Utilities Are Striking Back

Faced with the prospect of a dwindling customer base, some U.S. power companies are seeking to end public subsidies and other incentives for rooftop solar. A heated public relations battle in Arizona could help determine the future of solar in the U.S.READ MORE

The deal is making some Hawaiians nervous. Last month a coalition of clean energy advocates, solar trade groups, and community organizations petitioned the Public Utility Commission to complete its ongoing work on Hawaii’s energy strategy before considering the proposed acquisition.

“There’s been a lot of heart and soul poured into envisioning Hawaii’s energy future, and we need to finish that work before we can decide which company can meet those needs,” said Moriwake, the attorney for Earthjustice, which represented Sierra Club in the petition. “Everything is in play in Hawaii. That’s why it’s so key to get things right.”