It’s Paris or bust. Climate diplomats are preparing for a United Nations climate conference in the French capital in December that scientists say is probably the last realistic chance for the world to prevent global warming going beyond 2 degrees Celsius. Some kind of a deal will probably be done. But will it be one more diplomatic fudge or a real triumph for the climate?

In the run-up to Paris, governments have been asked to deliver pledges to cut emissions of the greenhouse gases known to cause climate change. The pledges, covering the period between 2020, when the agreement should enter into force, and 2030, are known as Intended Nationally Determined Contributions, or INDCs in the U.N. jargon. 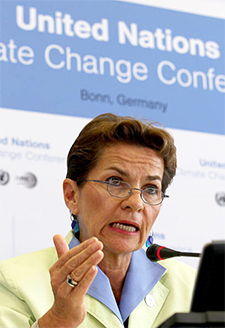 Major nations including the United States, China, the European Union, and Russia have submitted their INDCs. But unlike the Kyoto Protocol in 1997, which only set targets for industrialized nations, all countries are expected to make pledges before Paris.

Many of the pledges sound ambitious, but analysis suggest they fall far short of what is likely to be needed to prevent warming beyond 2 degrees C (3.6 F) later this century — a goal set by nations at the Copenhagen climate negotiations in 2009. “It is clear that if the Paris meeting locks in present climate commitments for 2030, holding warming below 2 degrees could essentially become infeasible,” Bill Hare of Climate Analytics, a think tank, said during preliminary negotiations held in Bonn, Germany, this month.

‘The proof is in the pudding, and the pudding is going to come out of the oven in Paris,’ says a U.N. official.

In fact, he said, they leave the world on course for at least 3 degrees C of warming.

But there is some good news out in the real world. The decade-long boom in coal burning across the world appears to be ending, and radically lower costs for renewables, especially solar power, make them increasingly attractive. One economic study published this summer concluded that green energy was usually “nationally beneficial,” regardless of the climate benefits. Indeed, there is a growing realization in many countries that cutting emissions is not just cheap, but could actually aid economic development.

Still, progress to a final agreement in Paris is proving painstakingly slow. Delegates left Bonn expressing frustration that too little had so far been settled. Fears were expressed of a repeat of Copenhagen six years ago, when similar talks collapsed in chaos, despite frantic efforts by a galaxy of world leaders, headed by Barack Obama, who flew in to do a deal.

But most delegates believe that this time, with the two biggest players, the U.S. and China, for the first time in broad agreement, there is a much greater chance of a deal. “The proof is in the pudding, and the pudding is going to come out of the oven in Paris,” the U.N.’s chief climate negotiator, Christiana Figueres, insisted in Bonn.

Many key commitments are in place. So far, 60 countries have made formal emissions pledges. They cover more than 65 percent of current global emissions. The pledges vary. Some are absolute targets expressed as tons of carbon dioxide per year in 2030; others are targets measured against business as usual, or promises to reduce emissions for every dollar of economic activity.

Following a historic deal in Washington last fall between Obama and Chinese President Xi Jinping, China has pledged that its emissions, which have been growing very rapidly for several decades, will peak by 2030. It has also promised to decrease burning of fossil fuels, to increase forest cover to absorb carbon dioxide, and to reduce emissions per unit of GDP by 60 to 65 percent by the same date. The U.S., the world’s second-biggest emitter after China, has pledged to cut its emissions by up to 28 percent between 2005 and 2025. That’s not as hard as it sounds, because after peaking emissions a decade ago, the U.S. is already halfway there.

The European Union has pledged to cut emissions 40 percent below 1990 levels by 2030.

In July, Obama upped the U.S. commitment by announcing a plan to achieve 32-percent cuts in emissions from its power stations by 2030. China, meanwhile, revealed that its coal burning fell in 2014 and may already be in long-term decline. At the same time, the world’s third-largest emitter, the European Union, which has already cut its emissions substantially since 1990, has pledged to reach 40 percent below 1990 levels by 2030.

A number of major emitters have yet to submit INDCs. They include India, currently the world’s fastest-growing economy, Saudi Arabia, and Indonesia. Brazil has also yet to make its formal pledge. But during a visit to Washington in June, its president, Dilma Rousseff, promised to end net deforestation, which is still the main source of Brazil’s emissions. She also boasted that by reducing deforestation in the past decade, Brazil has already cuts its emissions by 40 percent — a greater reduction that any other large country.

Among the tabled INDCs, Mexico promised to peak its emissions by 2026 and reduce emissions to 25 percent below a business-as-usual level by 2030, or to 40 percent below if it receives technical and financial assistance. South Korea promised a 37-percent cut from business as usual, while Japan promised an absolute emissions cut of 26 percent from 2013 levels. Ethiopia, in one of the most ambitious pledges from a poor nation, pledged to curb emissions sufficiently to bring them back below 2010 levels by 2030, which it says will represent a 64-percent cut from business as usual.

Why do countries feel able to make such commitments? None expect to suffer serious economic harm as a result. The main reason is emerging trends in how the world generates its energy.

Most important is the end of the coal boom. The contribution of the dirtiest of the main fossil fuels to global energy production soared in the past decade, largely on the back of Chinese economic growth. But with Chinese coal-burning now apparently past its peak, many energy experts believe the world as a whole is close to “peak coal.” Coal is costing more compared to other energy sources, and is a major contributor to choking smogs.
Any alternative is better for the atmosphere, whether natural gas, nuclear, or renewables. Renewables in particular are becoming more economically competitive. The cost of solar energy is down 80 percent in the past decade, largely as a result of Chinese manufacture of cheap photovoltaic panels.

The presumption that economic growth inevitably leads to a rapid increase in CO2 emissions is fading fast.

The Grantham Research Institute of the London School of Economics — which is headed by Lord (Nicholas) Stern, the former chief economist at the World Bank — concluded in July that most of the emissions cuts and other mitigation needed to decarbonize the global economy and stay within the 2-degree limit “is likely to be nationally beneficial, even leaving aside the climate benefits.”

The presumption among governments that economic growth inevitably leads to a rapid increase in CO2 emissions is fading fast — and with it their antipathy of accepting limits on those emissions. The days of climate negotiations being dogged by battles over “burden sharing” may be receding.

Are the current pledges enough to keep global warming below 2 degrees C? Nobody can be certain. There are too many scientific uncertainties about exactly how sensitive the atmosphere is to growing concentrations of greenhouse gases. We could get lucky, but equally there might be tipping points that could suddenly accelerate warming.

Most analysts agree that what is currently on the table is unlikely to be sufficient. Climate Action Tracker (CAT), a consortium of researchers that includes Hare’s Climate Analytics, calculates that the current pledges put annual global emissions of all greenhouse gases on track to rise from the current roughly 50 billion tons to 53 to 57 billion tons in 2025, and 55 to 59 billion tons in 2030. It reckons an optimum track to 2 degrees C would require emissions below 40 billion tons by 2030.

Higher emissions between now and 2030 would not inevitably take the world beyond 2 degrees, but they would certainly make the task more expensive and disruptive. It would probably leave the world requiring emissions cuts of more than 5 percent each year after 2030. Many technology analysts say that is next to impossible.

The debates that are likely to dominate the Paris talks will not be about emissions but about money.

The Paris agreement is likely to include clauses that would allow stronger targets on the basis of new science, but the evidence is that the existing science already shows nations should be aiming higher. Nonetheless, diplomats expect the conference to sign off on the INDCs largely unaltered.

The debates that are likely to dominate the Paris talks will not be about emissions but about money — to help developing nations reduce their emissions, adapt to inevitable climate change, and be compensated for damage caused by extreme weather.

In Copenhagen in 2009, rich nations agreed to establish a Green Climate Fund to help poorer nations both cut emissions and adapt to climate change by building national resilience. They promised to collectively put $100 billion annually into the fund beginning in 2020.

But there appears to be backsliding. According to a recent analysis by the aid charity Oxfam, less than a fifth of this has so far been pledged from public funds. Instead, rich nations are talking increasingly about topping up with private finance. A statement from the G7 leaders summit in Germany in June said that “mobilizing of private sector finance is crucial” to the fund, and would “unlock the required investments in low-carbon technology, as well as in building resilience.”

Ideas include private funding of renewables and setting up insurance funds to protect poor farmers from the economic consequences of crop failure.

The international community should stop chasing the chimera of a binding treaty to limit CO2 emissions, argue former U.S. senators Timothy Wirth and Thomas Daschle. Instead, they say, it should pursue an approach that encourages countries to engage in a “race to the top” in low-carbon energy solutions.READ MORE

The G7 statement called for 400 million people in the poorest countries to have access to such insurance by 2020. This is all useful stuff, but perhaps not what developing countries had in mind in Copenhagen. They expected rich-nation governments to dig into their own pockets.

Adapting to climate change will often not be possible. African countries, and others with little or no responsibility for climate change, want a separate fund to compensate them for “loss and damage” resulting from climate disasters such as extreme heat, wild weather, floods, and droughts. This would be a 21st century equivalent of war reparations — for climate crimes rather than war crimes.

The idea was first raised in earnest at negotiations in Warsaw in 2013. Both the U.S. and EU resisted the notion. But in Bonn, they appeared to relent, leaving some NGOs hopeful that an agreement can be reached on this.

Still, the French hosts remain worried that funding issues are the most likely deal breakers in Paris. That would be bad for the world, but bad also for France’s reputation. French Foreign Minister Laurent Fabius, who will be chairing the talks, said in June that “the question of financing is … decisive for reaching an agreement in Paris. The promise of Copenhagen must be kept absolutely. It is the basis of trust, and for many countries it is the condition of reaching agreement.”