North America was hit by 160 natural disasters in 2016, more than any other year since records began in 1980, according to an analysis by the global 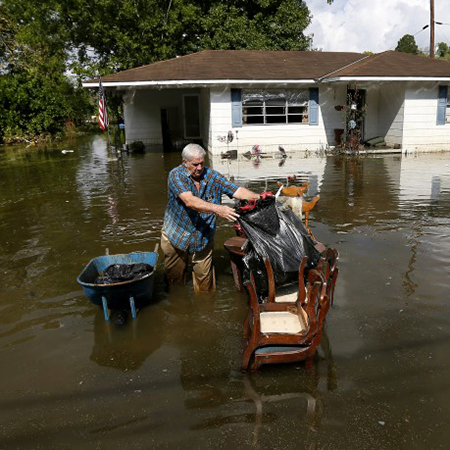 A flooded Louisiana home in August 2016.
reinsurance firm Munich Re. The disasters — which included floods, wildfires, droughts, heat waves, and coastal storms — caused an estimated $55 billion in damage. Only 54 percent of those losses were insured, Munich Re said. Two of the world’s five most expensive natural catastrophes last year happened in North America — Hurricane Matthew in late September and major flooding in Louisiana in August. The U.S. alone experienced 19 major flood events in 2016, its highest number ever. Munich Re classifies a natural disaster as any event that caused at least $3 million in damage. “A look at the weather-related catastrophes of 2016 shows the potential effects of unchecked climate change,” Peter Höppe, head of Munich Re’s Geo Risks Research Unit, said.