Soils Could Release 55 Trillion Kilograms of Carbon By Mid-Century

The world’s soils act as critical storage for carbon, sequestering carbon from the atmosphere to fuel plant and microbial activity. 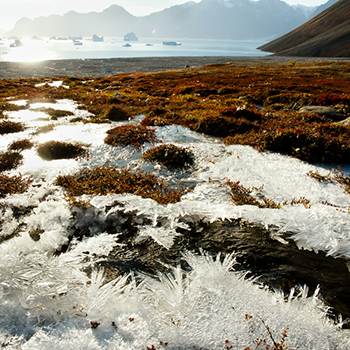 Permafrost in Greenland.
But scientists warned this week that as soils warm in response to climate change, they could release 55 trillion kilograms of carbon by mid-century — roughly equivalent to the projected emissions of the United States, or 17 percent of all countries, during that same period. The largest losses will be from high-latitude ecosystems, the new study, led by scientists at the Yale School of Forestry & Environmental Studies and published in the journal Nature, said. This includes Arctic and sub-Arctic permafrost, where colder temperatures and slow microbial activity have led to the buildup of massive carbon reserves over thousands of years. The scientists found that for every 1 degree Celsius of global warming, soils will release approximately 30 trillion kilograms of carbon into the atmosphere, or twice the annual emissions from human activities.