After overfishing decimated Atlantic and North Sea cod in the 1980s and 1990s, European fish buyers looked around for a cheap and abundant source of the prized species. They found it in the Barents Sea, a frigid, half-forgotten body of water above Russia and Scandinavia. Before long, as hundreds of trawlers were scraping the seabed for the world’s largest remaining cod stock, one-half of the cod caught on earth came out of the Barents Sea.

That soon proved to be too many. At least a third of the fishery was illegal, and the same pattern of overfishing that had wiped out Atlantic cod began to repeat itself in the Barents Sea.

Then, two years ago, an unusual thing happened. The biggest European seafood buyers — fearful that yet another cod stock was on the verge of collapse — agreed to impose strict rules on their Barents Sea suppliers. After environmental organizations issued dire warnings about the stock’s future, major corporations — including McDonald’s and Young’s seafood in Britain — led a drive requiring random inspections of fishing boats, blacklisting of illegal fishing vessels, and verifiable reports from certified boats that their cod catches did not exceed quotas.

The results have been dramatic. The International Council for the Exploration of the Sea (ICES) says illegal, unreported, and unregulated fishing in the Barents Sea shrank by as much as half last year and even deeper reductions are estimated for this year, an indication that the fishery may be on the road to recovery. Today, elements of this once dismal fishery are working with these corporations and suppliers to improve fishing practices. Their end goal is earning the imprimatur of the world’s leading certifier of sustainably caught seafood, the Marine Stewardship Council.

In an era of dwindling fish stocks — and with scientists predicting even steeper declines — corporate initiatives to promote sustainable seafood harvests are a rare bright spot in an otherwise gloomy global fisheries picture. Worried about the reliability of future supplies, major corporations — including Wal-Mart, Unilever, and McDonald’s — are increasingly using their economic clout to bring about change in an industry that has a long history of decimating the very resource on which its business has been built.

It is far easier to improve fisheries management by involving a few dozen companies than by targeting millions of shoppers in consumer campaigns.

The rise of corporate involvement in the seafood certification movement reflects several basic realities. First, that many seafood stocks around the globe have been grossly overfished. Second, that most governments and fisheries management agencies have done little or nothing to halt the plunder. And third, that it is far easier to improve fisheries management by involving a few dozen companies and conservation groups than by targeting millions of shoppers in consumer campaigns.


“The end users (corporations) were seeing shortages coming and were getting concerned about it,” said Jim Cannon, chief executive officer of the Sustainable Fisheries Partnership, a nonprofit group that guides troubled fisheries towards sustainable practices. He said that corporations surveyed the world’s fisheries and asked, “Can we find a resource that’s not depleted?”

“And the answer for the last 20 years almost always has been, `No’,” he said. “If you’re interested in an assured supply, your task then becomes increasing the number of well-managed fisheries by rebuilding the ones that have been historically overfished.”

Created just over a decade ago by the European retail giant, Unilever, and the World Wildlife Fund, the Marine Stewardship Council (MSC) has grown into an independent international organization that has certified 34 fisheries worldwide — from Alaskan salmon to New Zealand hoki — and has another 77 under assessment, the step prior to certification. The number of MSC-labeled products in stores — MSC-certified smoked salmon, for example — has leapt from 500 in February 2007 to nearly 1200 today. 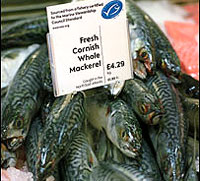 Mackerel with the Marine Stewardship Council’s seal of approval. BBC

The Marine Stewardship Council and the corporate seafood certification movement received a huge boost last year when Wal-Mart, the world’s biggest retailer, announced a dramatic shift in its seafood sourcing policy: The company said that over the next five years it would transition to buying only MSC-approved wild fish. In England, Marks & Spencer has pledged to sell only MSC-certified wild fish by 2012.

“There’s a very large number of fisheries coming into the MSC that simply wouldn’t be there without that Wal-Mart commitment,” says Cannon. “I’ve walked into fisheries that don’t supply Wal-Mart at all —never have and probably never will — and they’re doing the MSC. They say, `Well, my goodness, look at what Wal-Mart did. If they can do that, our buyer can do that tomorrow.’”

Despite this progress, the market-based approach has its skeptics, who see the power and commitment of the private sector as inherently limited and wonder where these giant corporate buyers are going to find such a vast quantity of sustainably caught seafood. Critics argue that beleaguered global fisheries will only be revived when governments and fisheries management agencies enforce tough new quotas, create extensive networks of marine protected areas, and manage the oceans as ecosystems, not just larders for the fishing industry.

“In the end it will be the regulation and management of fisheries by government that will make the difference,” says Joshua Reichert, managing director of the Pew Environmental Group. “As helpful a driver as the market may be, it just isn’t sufficient to reform the world’s fisheries in ways that significantly reduce the scope and the severity of some of the major problems they face.”

To date, the vast majority of the MSC certifications have gone to fisheries that were already operating sustainably; the group currently certifies 66% of all catch (by volume) of US fisheries, but much of that is salmon and pollock from Alaska. “They’re the low-hanging fruit,” says Cathy Roheim, a professor at the University of Rhode Island who studies the economics of sustainable seafood.

But to bring a poorly run, shadowy fishery, such as the Barents Sea cod industry, in from the cold is far more difficult. It requires that fishermen, seafood buyers, and conservation groups share the same long-term objectives — a rare alignment of interests.

The challenges now are huge, as scientists estimate that fish stocks in many of the world’s seas have been slashed to 10 percent of historic levels. Recently,
a paper in Science concluded that unless the plunder of the oceans slows, most fish stocks will collapse by mid-century.

Not long ago, consumers, not corporations, were seen as the vanguard of the sustainable seafood movement. Conservation organizations such as the Monterey Bay Aquarium designed seafood wallet cards to advise shoppers on which fish were and weren’t sustainably caught.

There are currently 34 fisheries in the Marine Stewardship Council program. Click here to see a map showing their locations.

Conservationists expected that consumer demand for eco-friendly fish would place a premium on sustainability and that fisheries would follow the money. The impact, however, has been underwhelming. The vast majority of consumers, particularly in the United States, have paid scant attention. Consumer campaigns have had more success in Europe, but still, said Roheim, “It turned out consumers weren’t key.”

But corporate pressure is already achieving results and forcing more fisheries to become sustainable. Retailers such as Wal-Mart have an obvious self-interest in creating a steady and affordable supply of seafood — and in burnishing their images. Meanwhile, conservation groups have begun to view corporations as more reliable market partners than consumers.

The effort to reform the Barents Sea cod fishery highlights the possibilities and pitfalls of the sustainable seafood movement. For years, illegal cod had flowed freely from the Barents Sea into the European market and beyond. “No checks, no stops” is how Cannon of the Sustainable Fisheries Partnership describes it. That’s why the success of large corporate buyers, working with the Norwegian government and environmental groups like Cannon’s, is so striking: In a brief period, they forced the fishing fleets and middlemen to become more transparent.

They did so by establishing both a black list of vessels known to be fishing illegally and an industry-wide contract, backed up by random audits, which required suppliers to legally verify all catch. Since the buyers represent 80 to 85 percent of all purchases, and almost all of the European market, the contract effectively shut out illegal vessels, quickly driving down illicit fishing.

Yet the Barents Sea fishery, plagued by the notorious lawlessness of the Russian fleet, remains insufficiently monitored. There may be less illegal catch, but the legal fishery is still environmentally destructive, relying on trawling equipment that damages the sea floor. That’s an impact that will need to be seriously mitigated before the fishery is eligible for MSC certification. In fact, the very small section of the Barents Sea fishery that’s already MSC-certified, the Norwegian-run Domstein fleet, doesn’t trawl at all: it uses long lines, a method in which baited hooks are hung from a single fishing line.

Like traditionally poorly-regulated fisheries, it may be years before the rest of the Barents Sea cod fishery improves sufficiently to earn MSC certification, which is based on a few primary principles: stable fish stocks, a healthy ecosystem, and a well-run management system.

Despite its exhaustive certification procedures, the MSC’s decisions are often highly contested, both by fisheries and conservation groups. Reichert of the Pew Environmental Group argues that because scientists have historically had trouble judging stock size, and are only now learning about factors like ecosystem health, a term like sustainability promises too much.

“We’re at a rather incipient stage of beginning to make those assessments,” he says. The market-based approach is ironic, he adds. “We’re actually encouraging people to eat more seafood at a time when we don’t have the capability to meet that escalating demand in anything resembling an environmental sustainable way.”

But Mark Powell, vice president for fish conservation at the nonprofit Ocean Conservancy, says that by using economic clout to push fisheries toward sustainability, corporations are helping achieve “the Holy Grail, which is actual, on-the-water improvement.”

“It’s true there’s a limit—the ocean is not infinite,” says Powell. “But we could have as much sustainable seafood as we have total seafood right now.”