The most direct path to America’s newest big oil and gas fields is U.S. Highway 12, two lanes of blacktop that unfold from Grays Harbor in Washington State and head east across the top of the country to Detroit.

The 2,500-mile route has quickly become an essential supply line for the energy industry. With astonishing speed, U.S. oil companies, Canadian pipeline builders, and investors from all over the globe are spending huge sums in an economically promising and ecologically risky race to open the next era of hydrocarbon development. As domestic U.S. pools of conventional oil and gas dwindle, energy companies are increasingly turning to “unconventional” fossil fuel reserves contained in the carbon rich-sands and deep shales of Canada, the Great Plains, and the Rocky Mountain West.

In North Dakota and other states, residents worry that the energy boom will deplete aquifers.

Colorado, Utah, and Wyoming hold oil shale reserves estimated to contain 1.2 trillion to 1.8 trillion barrels of oil, according to the U.S. Department of Energy, half of which the department says is recoverable. Eastern Utah alone holds tar sands oil reserves estimated at 12 billion to 19 billion barrels. The tarsands region of northern Alberta, Canada contains recoverable oil reserves conservatively estimated at 175 billion barrels, and with new technology could reach 400 billion barrels. Deep gas-bearing shales of the Great Plains, Rocky Mountain West, Great Lakes, Northeast, and Gulf Coast contain countless trillions of feet of natural gas. If current projections turn out to be accurate, there would be enough oil and gas to power the United States for at least another century.

But even as one of the largest energy booms in history has erupted along a great arc of the continent, the consequences are prompting civic discontent, lawsuits, and political battles in state capitals. The boom is producing fresh scars on the land and new threats to scarce water supplies. Government studies show that exploiting unconventional fossil-fuel reserves generates more C02 emissions than drilling for conventional oil and gas and uses three to five times more water. “It’s a pact with the devil,” says Randy Udall, a consulting energy analyst from Colorado. “The tar sands and shale oil and shale gas require a lot of water. It sets up a collision course for the West.”

In communities from Wyoming to Texas, thousands of trucks now rumble down rural roads, carrying the huge amounts of water — 2 million to 4 million gallons per well — needed to free oil and natural gas from shales by blasting them with high-pressure fluids. In places such as North Dakota, which receives modest amounts of rainfall, local residents and conservationists worry that the energy boom will deplete aquifers.

And the explosion in development of these unconventional fossil fuels raises a troubling question at the national level: At a time when the country should be embracing a renewable energy revolution, it is hurtling in the opposite direction, developing on a massive scale sources of energy that cause considerably more environmental harm than conventional oil and gas drilling. 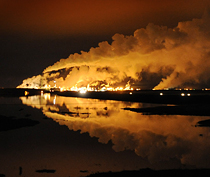 Highway 12 is a crucial supply route for this burgeoning industry, with fossil fuel companies using the road to reach a good portion of the West’s new oil and gas domain that lies to the north and south of the highway. The companies transport equipment 900 miles north to Alberta, Canada, where they are spending $15 billion annually to develop the region’s tar sands, now the single largest source of oil imports to the U.S. and the fastest-growing source of CO2 emissions in Canada, according to the Pembina Institute, a Canadian environmental think tank.

In North Dakota — which has become the fourth-largest oil-producing state in the country, with an estimated 100 million barrels being pulled out of deep shales this year and where 1,000 wells will be drilled in 2010 — Highway 12 crosses the $5 billion, 2,151-mile Keystone Pipeline. It is the centerpiece of a $31 billion network of major transport lines either planned or under construction to carry oil from the middle part of the continent to refineries in Texas, Oklahoma, and Illinois that are being modernized and expanded at a cost of more than $20 billion. In all, according to company reports and state economic development offices, the oil industry is spending nearly $100 billion annually in the U.S. to perpetuate the fossil fuel era.

Oil industry executives say their investments are consistent with the national goal of producing more energy to increase security. Oil companies are also profiting handsomely from the exploitation of these unconventional sources of oil and natural gas. The stakes became clear earlier this year, when ExxonMobil paid $41 billion to buy XTO Energy, a major player in unconventional fuels production, especially natural gas.

Last year, in a much-disputed draft environmental impact statement that summarized the need for the new Keystone-XL pipeline — which will transport oil from Alberta’s tar sands to U.S. refineries — the U.S. Department of State tacitly backed the new energy boom. “The increasing demand for crude oil in the U.S. cannot be entirely met by efforts to conserve use of refined petroleum products or the increased use of renewable energy,” the department said. “As crude oil demand increases, the overall domestic supplies of crude oil are declining.” The department’s analysts added that without the pipeline and the new supplies of oil it would carry, the country “would remain dependent upon unstable foreign oil supplies from the Mideast, Africa, Mexico, and South America.”

One of the flashpoints is occurring in northern Idaho and eastern Montana, where oil companies want to use Highway 12 to dispatch the largest convoy of oversized trucks ever assembled to Alberta’s tar sands and elsewhere. The trucks, nearly as long as football fields and so wide they cover both lanes of the highway, haul refining and processing equipment that weighs hundreds of tons and is as tall as a mansion.

The Bakken Shale may contain 4 billion barrels of oil and trillions of cubic feet of natural gas.

ConocoPhilips was granted a road permit in Idaho last month to haul four Korean-built oversized oil-processing units from Lewiston, Idaho, where they were offloaded from Columbia River barges, to the company’s expanding refinery in Billings, Montana. Earlier this month, Idaho Second District Judge John Bradbury revoked the permit, asserting that the state did not adequately assess the hazards of the shipment, particularly the consequences of an accident involving one of the immense processing units blocking the highway. Local officials in Montana are considering similar legal action.

The court judgment in Idaho, which is set for an appeal on Oct. 1, could have significant ramifications for ExxonMobil Canada, which wants to make 207 oversize hauls next year along Highway 12. Exxon’s trucks will carry even larger Korean-built units to be assembled into a new tar sands oil processing plant in Alberta. The company says it must use Highway 12 because the loads are too big to fit under bridges along interstate highways or rail lines.

Despite opposition, the oil and gas industry is undeterred. The Bakken Shale that lies 10,000 feet beneath a 200,000 square mile expanse of North Dakota, Montana, and Saskatchewan is said by the U.S. Geological Survey to contain more than 4 billion barrels of oil and trillions of cubic feet of natural gas. Oil industry geologists say there is much more than that in the Bakken, and in a second oil-rich shale reserve, the Three Forks, that lies below it.

Spurred by the Bakken riches, energy companies are now spending tens of millions of dollars to lease mineral rights in Wyoming and Colorado and are drilling exploratory wells in the Niobrara Shale, which sprawls beneath both states.

“It just almost boggles the mind,” Lynn Helms, director of the North Dakota Department of Mineral Resources, told a veterans group in Minot on Sept. 2. “It is not like the traditional oil and gas play.”

A 2006 study by the Department of Energy that looked at rising energy demand and diminishing freshwater supplies found that the collision between the two was occurring most violently in the fastest-growing parts of the country that also happened to have the scarcest water resources — California, the Southwest, the Rocky Mountain states, and the Upper Great Plains.

It takes 2.5 to 6.5 gallons of water to extract and refine one gallon of tar sands oil, which is four times more water than it takes to produce oil from conventional reserves, according to a 2009 study by Argonne National Laboratory.

Moreover, producing tar sands oil, according to the Natural Resources Defense Council, generates as much as three times as many greenhouse gases per barrel as conventional oil production.

Extracting unconventional fossil fuel reserves like the Bakken formation uses a lot of water because getting to the oil and natural gas requires rupturing the deep shale to create open spaces and crevices through which the oil and gas can flow. The pulverizing process, called hydraulic fracturing or “fracking,” involves sinking drill bits two miles deep and then turning them to move horizontally through the shale. An armada of tank trucks hauls several million gallons of water to each well site, where pumps shoot it down the well at such super high pressure — 8,000 pounds per square inch — that the rock splits.

The practice is risky. Earlier this month, an oil well undergoing fracking near Kildeer, N.D. ruptured. The blowout leaked 100,000 gallons of fracturing fluid and crude oil before being plugged two days later.

Fracking has caused contamination of surface and groundwater in other states and harmed drinking water in some communities, according to a number of reports from local environmental organizations.

Earlier this year, a supervisor with the North Dakota Game and Fish Department formally opposed a farmer’s plan to sell a third of the water in eight-foot-deep Trenton Lake to a Texas energy developer. “Trenton Lake just doesn’t have the depth and capacity without seriously impacting the lake,” said the supervisor, Fred Ryckman. “The oil industry can find water elsewhere.”

Almost 150 oil and gas drilling rigs are operating in North Dakota this month, nearly tying a state record, and more than all but two other states, Texas and Pennsylvania. The oil and gas rush has been an economic boon to North Dakota, with more than 7,000 laborers migrating into the state; North Dakota’s unemployment rate has dropped to 3.6 percent, the nation’s lowest. The energy boom has also filled state coffers. When North Dakota’s budget cycle ended in June, state Budget Director Pam Sharp proudly reported an $800 million surplus.

Clearly, most North Dakota officials are not worrying — yet — about the environmental consequences.

Correction, Oct. 1, 2010: An earlier version of this article incorrectly stated the amount of water it takes to produce oil from tar sands. The correct figure, as cited by the Argonne National Laboratory, is that it takes 2.5 to 6.5 gallons of water to extract and refine one gallon of tar sands oil.